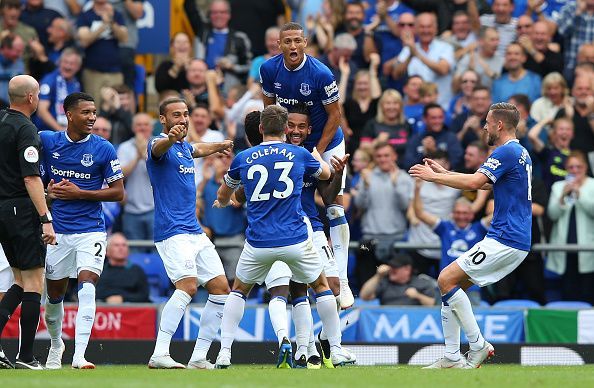 Everton recorded their first Premier League win of the campaign with a narrow 2-1 victory over Southampton, but how did some of the players fare on Merseyside?

Following an enthralling 2-2 away draw against Wolves last weekend, Everton recorded their first Premier League victory of the campaign with a 2-1 win over Southampton at Goodison Park.

They raced into a two-goal cushion within the first half-hour, as goals from Theo Walcott and Richarlison showcased their dominance. However, Danny Ings’ close-range finish shortly after the half-time interval gave Saints hope of a genuine comeback.

Despite fashioning goalscoring opportunities, the visitors were unable to salvage a point as Marco Silva’s side held firm and could’ve added to their advantage themselves in truth. Here are five players who experienced contrasting fortunes during this affair: 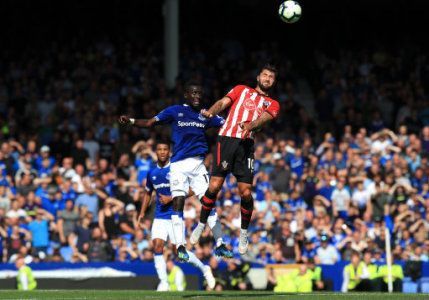 Although his strike partner halved the deficit and remained a nuisance throughout, the same could not be said for Austin – who was wasteful and struggled for large periods in a match where Mark Hughes needed his presence in the final third to pay dividends.

He had three shots on goal, yet failed to hit the target with all of them. One in particular, a golden opportunity after just nine minutes, went begging as he struck wide from a teasing James Ward-Prowse delivery into the box.

During his battles with Mason Holgate, he regularly came out second best and was made to look foolish and sluggish at times by the 21-year-old. Unsurprisingly, he was hooked off just before the hour mark in place of Shane Long as the visitors went in search of an all-important equaliser.

From a player of his quality and capabilities, this was a disappointing showing and one you’d hope doesn’t reflect too poorly on Southampton’s forward options this term – not least as he’s expected to be pivotal in their success. 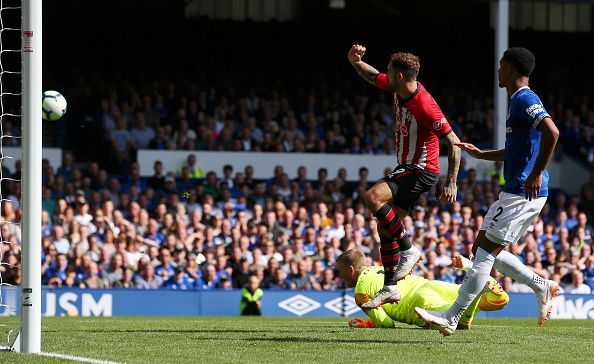 Holgate (no.2) watches on as Ings is denied by Pickford

As previously stated, Austin regularly came out second best in his battles with none other than Mason Holgate.

In the team following Phil Jagielka’s suspension last week, the 21-year-old was composed in possession and equally calm out of it too – holding his position alongside Michael Keane and remaining firm under pressure whenever Southampton players looked to press.

While Jagielka and new signing Yerry Mina both watched on from the players’ box, it’s clear to see the Doncaster-born defender was keen to make a positive impression while asserting his starting credentials. A defensive display like this one did his prospects no harm either. Four clearances, a tackle, interception, blocked shot and seven aerial duels won. No fouls committed – not a bad afternoon’s work. 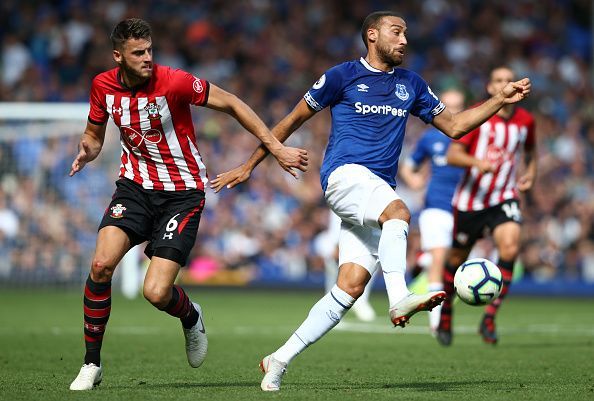 It was difficult to separate the two Southampton centre-backs, in terms of which one performed worse here.

However, I’m going with Wesley Hoedt. At 24, he’s already made appearances in the Serie A, Eredivisie and also for his national side too, the Netherlands. He joined for a reported £15m last summer, seen as a Virgil van Dijk replacement and despite being as highly-regarded as he is, this performance just reiterated his glaring flaws.

He’s not the quickest defender but his general positioning here was awkward and ultimately cost him. Stephens himself can be error-prone, but Hoedt was the player who needlessly gave away the free-kick – from which Walcott broke the deadlock.

He was shown a booking shortly afterwards yet continued in the same fashion, either finding himself overwhelmed by Cenk Tosun’s hold-up play or being given the runaround by any of Everton’s quicker forward players.

The only Southampton starter barring Nathan Redmond who failed to complete a tackle, that doesn’t make for good reading. Four clearances, one interception and blocked shot, he committed two fouls and was exposed frequently as Everton went in search for more goals. 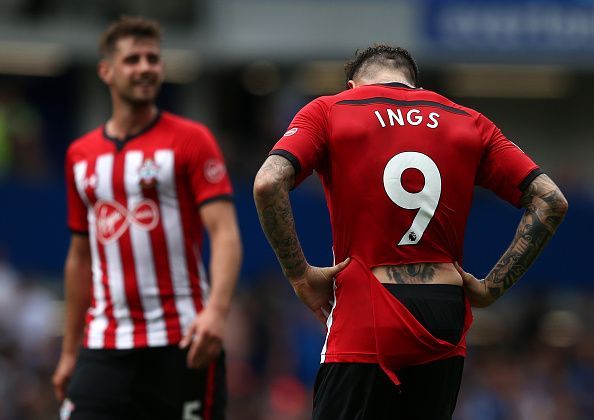 Tireless display: Ings worked hard throughout and got a goal for his efforts

Having joined the Saints on an initial season-long loan, Ings’ display here is likely to prompt more suggestions they’ll make the move permanent next summer when possible.

There is an option to do so within the contract, though the Liverpool forward has struggled with long-term injuries in recent seasons and will be looking to keep fit, proving he can get through a Premier League campaign unscathed before moving on to bigger and better things.

Austin struggled, Ings thrived at Goodison Park – the stadium he had already netted twice in before this fixture, which you could assume from the unwelcoming reception received from the home supporters.

He worked tirelessly, both in and out of possession, to frustrate Everton and pose real questions of their backline. Jordan Pickford looked shaky upon occasion in goal, like he did last weekend, Ings will reflect on the fantastic save he forced from England’s number one and wonder what if. 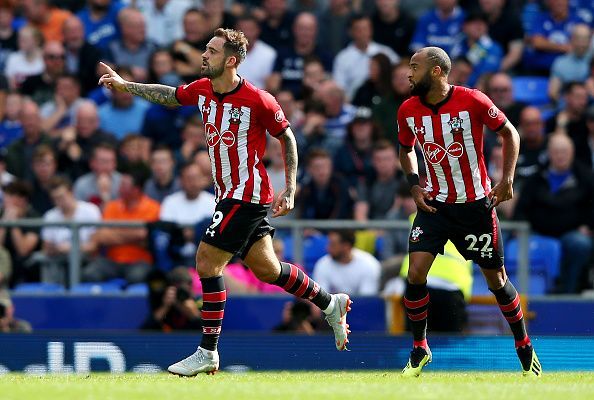 Ings wheels away to celebrate halving the deficit, gifting Southampton a chance back into the match

Glanced a free header wide, had Michael Keane beaten on a few occasions and you just wonder whether if he was sharper in-front of goal before eventually snatching one from close-range, the scoreline would have been completely different.

Despite the result, his display will provide a much-needed morale boost with matches coming thick and fast every weekend, where he’ll look to maintain an impressive run of goalscoring form. 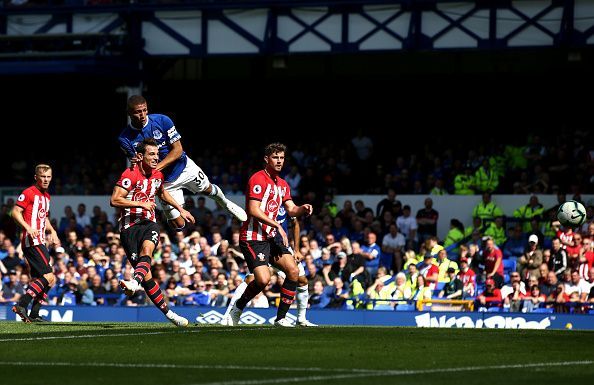 £40m? What a waste of money. We’re only two games into the new Premier League season and already, Richarlison is silencing his critics. He leads the league’s top goalscorers chart with three already and had another eventful experience here during his home debut on Merseyside.

He was relatively quiet and found himself on the periphery for sustained periods early in both halves, but came alive when his attacking influence was needed most. Excellent attack positioning saw him rise highest and double the Toffees’ lead with a well-taken header – leaving Alex McCarthy helpless.

Thankfully, he was still on the pitch at the time as just minutes beforehand, he suffered an innocuous groin strain after landing awkwardly in a battle for possession. 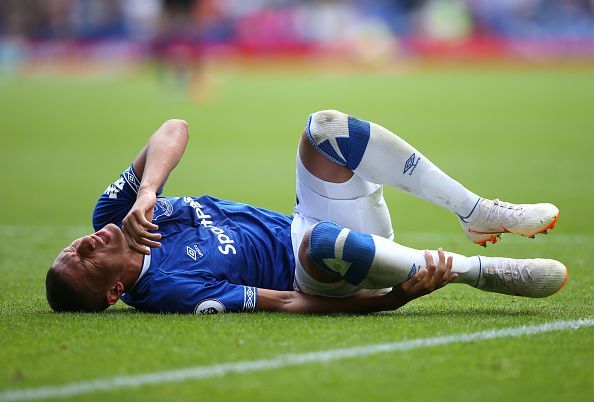 Richarlison went to ground on numerous occasions, though was okay to continue

It’s nothing new for the 21-year-old, whose pain threshold appears remarkably low for a Premier League player, but he understands how opposing defenders often feel inclined to foul in order to halt him.

Two key passes, two completed dribbles, two tackles, two interceptions, four clearances and four aerial duels won, it certainly was a busy afternoon for the Brazilian – who relishes contributing off-the-ball just as much as with it at his feet.

He’ll need to work on improving his passing accuracy over both short and longer distances, perhaps trusting his teammates more at times too as decision-making can still frustrate, but it was an impressive display and one that will help Everton fans warm to him very quickly indeed.