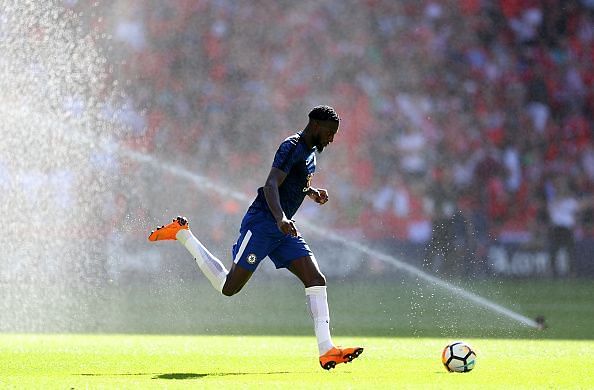 Bakayoko signed a season-long loan deal to join AC Milan earlier this week, with an option to buy next summer if his spell is a successful one. So, what happened to the Blues’ £40m signing from just 13 months ago?

Yesterday, Chelsea ran out 3-2 winners against Arsenal in a perfect example of how the Premier League can be unpredictable at its finest, and brutally ruthless at times too.

Tiemoue Bakayoko has definitely felt the brunt of ruthlessness in England’s top-flight over the past twelve months. He joined AC Milan on a season-long loan move earlier this week, only 13 months after signing a five-year deal in west London.

There’s an option to buy within the deal, a €35m package being reportedly agreed between the two teams before this move was complete.

How did such a drastic fall from grace happen?

Well for starters, having a £40m price-tag on your head is never beneficial for development – not least if you start slowly at your new employers.

That’s precisely what happened too, he struggled at Wembley against Tottenham during a 2-1 win in an eventful display. Six fouls committed, a grim 62.5% passing percentage and dispossessed on three occasions. 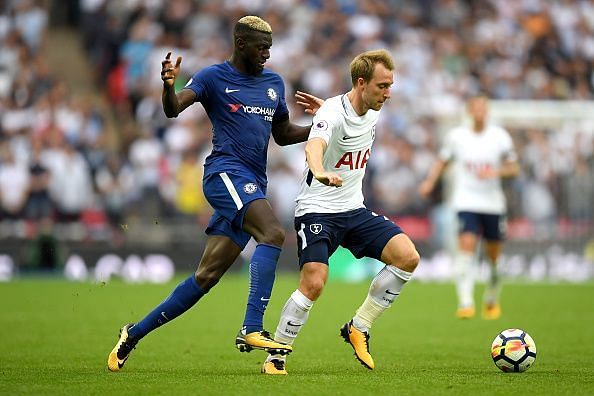 Bakayoko (left) in pursuit of possession against Tottenham’s Christian Eriksen

It didn’t get much better either, as the only noteworthy performance he produced against top opposition before Christmas was during their 1-0 home victory against Manchester United.

Perhaps it’s typical then, that he had been booked after 20 minutes there and was walking a tightrope ever since.

Statistics can be deceiving. Bakayoko made 43 appearances across all competitions – scoring three and creating an additional three more. He averaged 2.2 tackles, 1.3 interceptions, 1.2 clearances and 1.2 completed dribbles in the Premier League.

On the surface, that looks decent. In comparison to Kanté though, the numbers are just not good enough. 3.3 tackles, 2.5 interceptions, 1.7 dribbles per game – all better than his compatriot.

Bakayoko missed three big goalscoring opportunities, committed the most fouls (50) of any Chelsea player last season despite playing significantly less than most. Kanté meanwhile, had 41 fouls and almost double his completed tackles in just under 3,000 minutes.

In terms of the league’s defensive-midfielders, only Jack Cork and Cheikhou Kouyaté were dispossessed more regularly than him (27), too.

The Watford debacle and aftermath

Then, there was a steady run of matches where he was performing at a good level alongside N’Golo Kanté as a holding midfield partnership. The wheels soon came off the bus though, as the Blues’ eight-match unbeaten streak was ended in emphatic fashion with two quick defeats against Bournemouth and Watford.

The latter of which, Bakayoko only played half an hour before receiving his marching orders at Vicarage Road. Two yellow cards in five minutes was arguably harsh on first viewing, but the fact he had committed two needless fouls in that time was frankly inexcusable from a player whom Chelsea expected much more from in the early months. 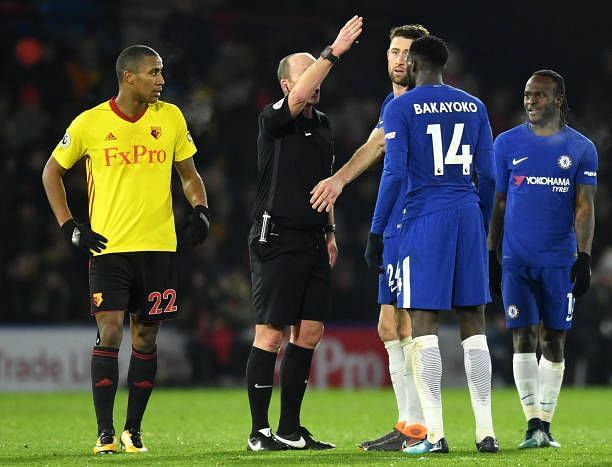 He appeared bemused, the travelling supporters did too and Chelsea were thumped 4-1 with a numerical disadvantage hanging over Antonio Conte’s side for 60 minutes. Tiemoue made four more league starts before the campaign’s conclusion and surprisingly did enough to start the Blues’ FA Cup final win over United.

The fact that most player ratings praised him for “not doing anything significantly wrong” is particularly telling and perhaps was a sign of foreshadowing what was to come under new management.

Maurizio Sarri’s arrival saw the Frenchman slide down the pecking order in midfield as Ross Barkley, new acquisition Jorginho and even the returning Ruben Loftus-Cheek were preferred to him in their dishevelled pre-season campaign.

The fact that Kanté – now a World Cup winner – played a pivotal role for France in Russia this summer while Didier Deschamps didn’t even consider a place on the standby list for his younger club teammate speaks volumes. He knew then, just as well as anyone, that a move away from Stamford Bridge was needed. 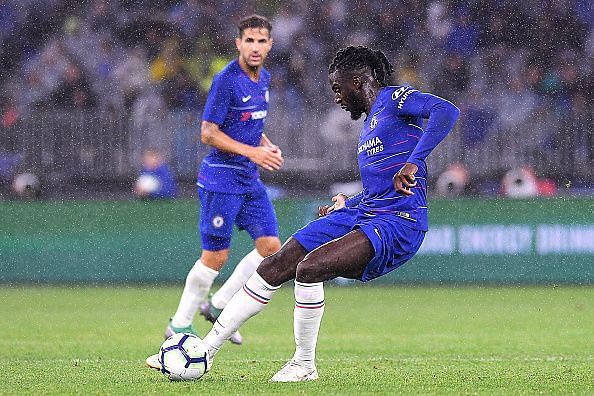 Time for a fresh start

To brand Bakayoko a “flop” is both harsh and technically true, given the price Chelsea paid for him and how often he actually delivered to his full potential, it’s fair to argue he struggled to settle in England’s top-flight.

He turned 24 earlier this week too and given former teammate Fabinho (also 24) finds himself in a similar situation following a big-money switch to Liverpool this term, you could suggest the move was too soon or the wrong one for him during his career.

After all, Chelsea are the type of ruthless side who are happy leaving players behind if they’re not immediately ready to perform at a consistently high level. That’s not to say Bakayoko isn’t a good player, either. Some are just unable to settle quickly enough to such lofty expectations and instead flourish elsewhere.

Too clumsy, sloppy in possession and having struggled against those who adopted a relentless pressing tactic, perhaps a move to Italy’s top-flight will suit him better. Time will tell, though it will be intriguing to watch him alongside the likes of Franck Kessié in midfield.