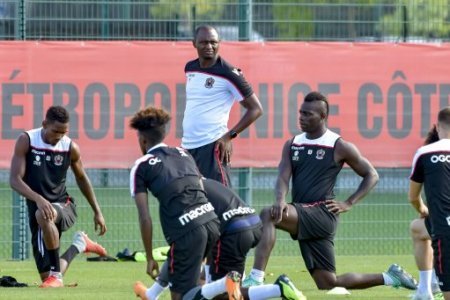 The 28-year-old Italian, who has impressed during his spell at Nice, is set to remain in Ligue 1 for at least another league campaign – despite previously stating the desire to leave and seek pastures new.

Mario Balotelli’s future is, for now, sorted. He has agreed terms to a one-year contract extension at Nice, despite saying a few months back that he was eager for a new challenge.

It will come as a welcome boost for manager Patrick Vieira and the rest of his coaching staff at Nice, longing for the forward’s immediate impact having struggled during their opening two league fixtures.

They finished 8th in the league last term, a drastic drop from their impressive third-placed finish in 2016/17. With that being said, only seven points separated Rennes in 5th and Montpellier in 10th by the season’s conclusion – highlighting just how tight it was in the race for European places.

Balotelli was the club’s top goalscorer last term, with 26 goals in 38 appearances. The campaign beforehand? 17 goals in 28 fixtures (across all competitions).

Absent during the first week of pre-season training, speculation naturally ran rampant about Mario’s new destination. Ligue 1 rivals Marseille were linked, while a potential Serie A return was also seemingly in the offing.

He missed the start of their league season through suspension, but the club have since announced that he’ll be remaining at Nice for another season. The club’s statement on Twitter yesterday read:

“There will be a season three to the hit series. The agreement was endorsed by all parties on Monday night. Suspended for the first three Ligue 1 games, the forward, who has scored 43 goals since arriving at the club, will be available for selection next week, ready for the trip to Lyon.”

Vieira was under a similar notion that Balotelli was unprepared to return and instead, when quizzed by reporters, suggested he’d be helping to resolve his future.

“It’s going to be very complicated, very difficult, as the player wants to leave. What’s important, for me and the club, is to keep players who want to help the club improve – and from the moment Mario has decided he wants to leave, the club has to do what’s necessary to let him leave.”

It was a surprise to see Mario wanted to leave Nice initially, as he had impressed in the final third for them. Consistency, rather than talent, has always been the underlying question for him – as echoed by encouraging spells at Inter Milan and Manchester City. Equally though he has struggled at periods in his career, like his second stint at AC Milan and an unsuccessful experience with Brendan Rodgers’ Liverpool side.

He made his long-awaited return to international football with Italy back in May under his former boss Roberto Mancini and now is precisely the best time for him to continue flourishing where he is. Opting for pastures new, committing to another unnecessary risk? That’s unproductive for his career prospects, not least at an age where he needs to be playing regularly and has the opportunity to spearhead a team’s attack, rather than being a substitute option for instance.

Nice have lost some of their most influential players this summer, with both Jean-Michael Seri and Maxime Le Marchand joining Fulham, while Mario’s strike partner Alassane Pléa joined Borussia Monchengladbach. Losing Balotelli would be one step too far right now.

One thought on “Mario Balotelli to remain at Nice for another season, despite desire to leave”