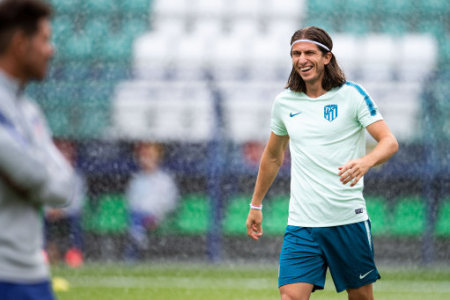 According to recent reports, Ligue 1 champions Paris Saint-Germain are very keen on completing a move for Atletico Madrid fullback Filipe Luis before next week’s transfer deadline – whose €30m release clause is being quoted as Atletico’s asking price.

Paris Saint-Germain are preparing to activate the €30m (£26.9m) release clause of Atletico Madrid full-back Filipe Luis and sign him in the coming days, according to recent reports.

The 33-year-old, who has spent seven years in two separate spells at Atleti, is said to be angling for a move away from Spain and wants a new challenge during his final few years as a professional.

Luis, who featured on two occasions for Brazil at the 2018 World Cup, has amassed 300 total appearances at Atletico and established himself as a mainstay in defence twice – the second time after a forgettable spell with Chelsea in 2014/15.

He made 28 appearances (all competitions) last term and started during their 1-1 draw against Valencia to start the new 2018/19 La Liga campaign. But goalkeeper Jan Oblak hinted post-match that the left-back could be on the move again. 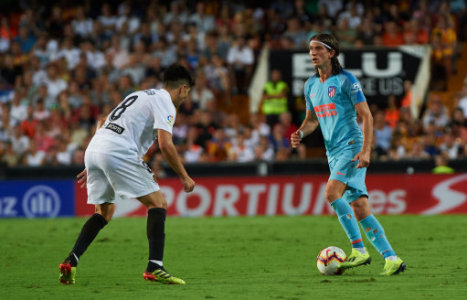 When asked about Filipe’s potential exit, the Slovenian international told BeIN Sport: “It’s a little sad, but that’s the way it is. He has a good opportunity and we have to respect the decision of each player. Let’s see what happens.”

PSG are said to want firm competition for Layvin Kurzawa in the left-back position and, with another gruelling season on the cards, they want one or two more acquisitions before next week’s transfer deadline.

They have already reportedly had a €60m (£53.6m) bid for Juventus’ Alex Sandro rejected last week and the 27-year-old is highly-regarded in Italy. It would take an even bigger offer for Massimiliano Allegri to consider, not least because their window closed before the Serie A campaign began this past weekend.

Luis’ current contract expires next summer and talks over a new deal have stalled in recent months. He is said to be unhappy that Lucas Hernandez has usurped him in the pecking order while his relationship with manager Diego Simeone is also strained.

Yuri Berchiche, who early last month sealed a €20m (£17.9m) move to Athletic Bilbao, was PSG’s other senior option in that position. Their initial bid, a reported €5m (£4.5m), is far lower than Atletico’s asking price.

Plenty of news sources have begun reporting the news in recent days, with the player himself seemingly eager for the move to materialise in time.

It makes sense from PSG’s perspective too, in a deal similar to the one which saw them sign Luis’ compatriot Dani Alves on a free transfer from Juventus twelve months ago.

Atletico are rightly reluctant to sell, not least with the league season already underway. Simeone and his coaching staff must now decide whether to shortlist possible targets or reward a youngster from within the club’s academy with a first-team opportunity.

Alex Telles (Porto), Alex Grimaldo (Benfica), and Jordan Amavi (Marseille) have all been earmarked as potential acquisitions. It appears increasingly likely that Luis wants to leave and, even though they value him highly, it is doubtful Simeone would want anyone not fully committed to the task at hand this season.

PSG are expected to make a revised bid, as they are aware that Luis himself is interested in completing the move. However, they will try and negotiate further to avoid paying the full €30m, not least with Financial Fair Play still lurking above the club’s head.