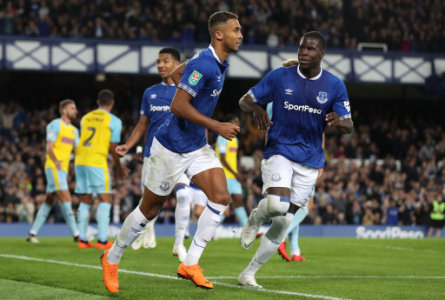 Kurt Zouma has publicly insisted that his Chelsea career is far from over, instead saying that he will prove himself once more in west London after his current loan spell on Merseyside is complete this season.

Zouma, 23, made his full debut under Marco Silva during the Toffees’ 3-1 Carabao Cup win over Rotherham United yesterday and will be hoping that he quickly establishes himself as a first-team regular, despite numerous additions over the summer at Goodison Park.

Having spent last year out on-loan at Stoke City, Zouma emerged as one of the club’s most consistent performers. It was a shame then, the team collectively struggled and were unsurprisingly relegated with three games to spare.

It’s easy to forget too that, prior to that loan move, he had signed a new deal at Chelsea. Heralded as part of a monstrous defence for years to come, Kurt has remained patient in waiting for his opportunity to return.

READ: 5 PL players who must leave their clubs before the window closes

If anything, it was a signal of intent that Chelsea were prepared to be patient with a highly-rated young defender who was unfortunate with a lengthy injury and needed patience during his recovery.

As quoted by the Guardian, Zouma said: “I will go back [to Chelsea], yes. I have always believed in myself since I started playing football at 16, always wanted to show myself at Chelsea since I have been there.”

Zouma, one of six new acquisitions at Everton, does not have an obligation to buy in his existing loan deal.

“I know my injuries stopped me in the way I wanted to play, but they are part of football and I want to show people I can come back and play there. That’s why I need some game time at Everton here because they are a good team.”

David Luiz and Antonio Rudiger have been Sarri’s preferred central defensive pairing since the Italian’s appointment to date, so it was feasible for both parties that Zouma requested another loan.

It’s a shame that he did suffer from such a nasty knee ligament injury, at a time when he was establishing himself as a mainstay within the Chelsea backline. With that in mind, injuries such as those are often more difficult to fully recover from – not least because the joints weaken and there’s a good chance it’ll occur again.

Nathan Aké is a perfect example of a quality centre-back who felt his opportunities were stifled by Chelsea’s ongoing pursuit of defenders from abroad, while Andreas Christensen might soon feel the same way himself if not given a fair crack of the whip under new management.

Considering this is the second successive season that Zouma has been loaned out to gain first-team experience in England’s top-flight, how long will it be before he decides to act?