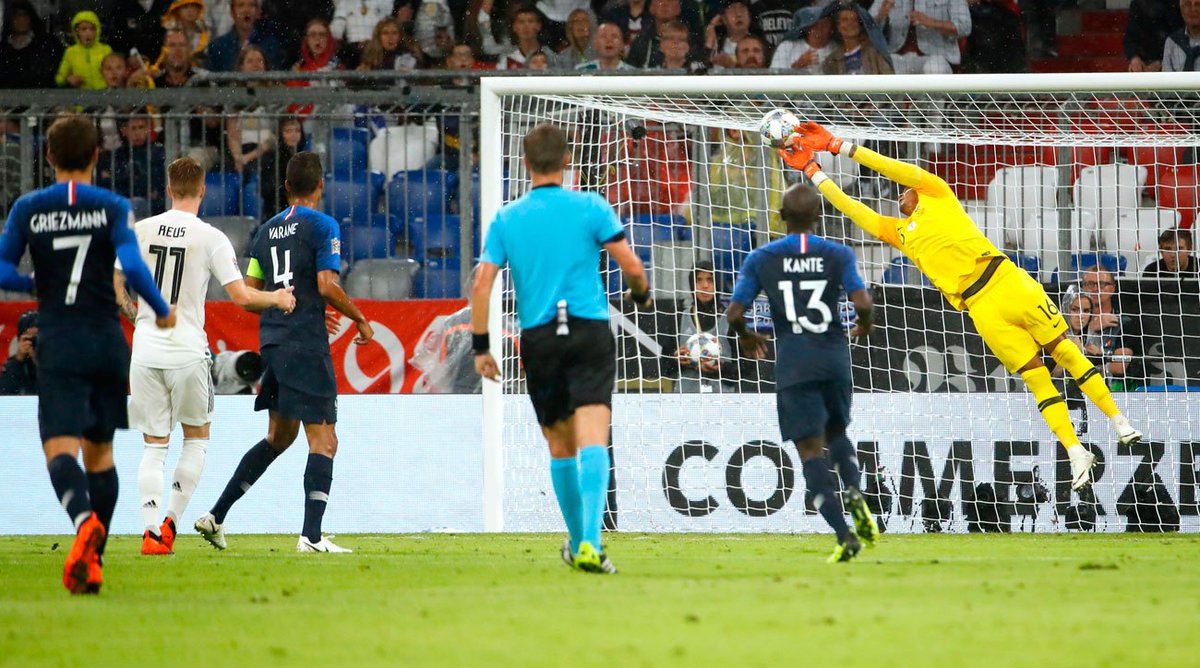 The points were ultimately shared by Germany and France as their UEFA Nations League opener ended in an entertaining stalemate at the Allianz Arena. PSG goalkeeper Alphonse Areola, making his international debut for France here, made a string of excellent saves as the hosts created plenty of goalscoring opportunities.

The last five World Cup winners have not won their first game after being crowned champions, France were looking to avoid history repeating itself.

Immediately on the defensive, Les Bleus were forced into a few important defensive interventions to thwart Germany as the hosts looked eager to test PSG goalkeeper Alphonse Areola on his first international cap.

France start on the defensive

Samuel Umtiti dispossessed Thomas Muller, before Benjamin Pavard made a similar sliding challenge on the opposite flank to deny an onrushing Antonio Rudiger. The Chelsea defender dangerously left his studs in and caught the Stuttgart youngster nastily across the face – very lucky not to be cautioned by the officials, as they saw it as an innocuous challenge. 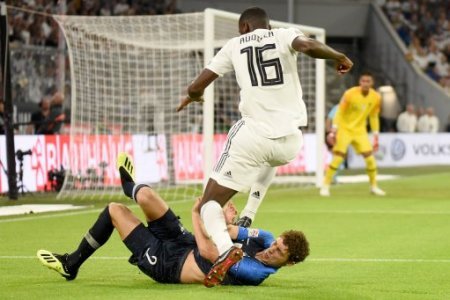 Rudiger (no.16) was late and left his studs in on Pavard early on, lucky not to have been cautioned. (Picture source: PA Images)

As time passed, the visitors grew in confidence and began to string promising plays of their own together. Germany were comfortable with possession and appeared unworried by France’s high-pressing tactic, yet needed to play at a higher tempo themselves if they were to create many goalscoring opportunities.

RB Leipzig’s Timo Werner forced Areola into his first save of the evening, having weaved beyond Pavard and struck low goalwards.

Both sides come close before interval

Mats Hummels went close from an inviting Toni Kroos corner, but watched his headed effort flash over the crossbar before Olivier Giroud forced Manuel Neuer into a good diving stop at the other end. Giroud then turned into an important figure at the back for France, heading clear from a dangerous corner delivery and alleviating pressure on their goal.

Neuer denied Kylian Mbappé from range, as his well-struck free-kick effort was ultimately a comfortable save. Rudiger, who continuously ran down the left-hand side, also stung Areola’s gloves with a powerful effort.

With a minute of stoppage time before half-time, France fashioned the game’s best chance. A well-worked passing move saw them in the final third, where Borussia Monchengladbach’s Matthias Ginter blocked Matuidi from striking goalwards.

The ball was fizzed back across the box by Mbappé into Giroud’s path, who came narrowly close to breaking the deadlock with a backheel effort. With Jerome Boateng marking him tightly, he could only watch it trickle beyond Neuer and the far post.

There were no substitutions by either manager as the second-half began, though both teams were perhaps eager to increase their attacking tempo. Mbappé, at the heart of France’s best attacking moves, was efficient with his movement and easy on the eye. Excellent touches and trickery meant German defenders struggled to keep tabs on him. 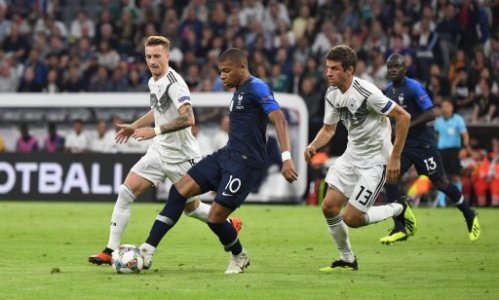 Mbappé (no.10) was a constant nuisance, even without regularly being on the ball, as he was key in their attacks. (Picture source: PA Images)

Griezmann forced Neuer into another close-range stop but should have done better with time and space to utilise. Werner was again threatening down the flanks, leaving Pavard in his wake as he probed in-and-around the box. Muller and Kimmich fired wide from distance before both sides came close to an opening goal. 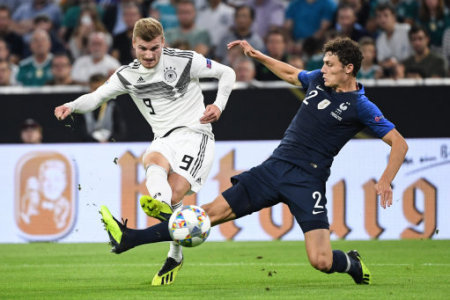 Werner (L) regularly had the beating of Pavard down the flanks as Germany pressed for an opener. (Picture source: PA Images)

France, powered by Mbappé’s link-up play with Pavard, passed their way into the final third where Griezmann was once again denied by Neuer’s reliable hands.

Areola forced into action as Germany turn the screw

Then just seconds later, Marco Reus forced an excellent acrobatic save by Areola to keep the scores level. Ginter’s low cross skidded across the turf and Reus didn’t hesitate, instead shaping to shoot first time goalwards. With time ticking down, both sides made one change apiece. Ousmane Dembélé replaced Giroud, while Ilkay Gundogan came on for Goretzka.

Hummels came close after a lung-busting run into the area on the counter-attack. He unselfishly crossed towards Muller, who opted to control the ball instead of shooting with no markers around him – allowing France defenders to swarm back and intercept the danger.

Areola made a decent save to thwart Hummels’ eventual effort, though the Bayern defender was visibly confused by his teammate’s decision-making. Gundogan shot over the bar before Areola tipped Muller’s cross-cum-shot over the bar.

Then, Ginter came close with a bullet header from an inswinging Germany corner. He thought he scored. Areola had other ideas. Stretching across to his right, the 25-year-old made another important diving stop to keep his clean sheet intact. After Hugo Lloris performed similar heroics this past summer, he would have been proud.

Nabil Fekir came on in place for Griezmann, who flattered to deceive despite some promising attacking moments. Leroy Sané made his long-awaited Germany return, albeit in a cameo from the bench, replacing Reus for the final few minutes. Corentin Tolisso added fresh legs too in a like-for-like swap with Matuidi.

Two minutes of stoppage time came and went, as the referee blew his whistle for full-time. France play the Netherlands on Sunday evening next on matchday two, while Germany play Peru in a friendly this weekend.