Goals from Johann Berg Gudmundsson and Sam Vokes proved enough for Burnley to snatch all three points in south Wales, against a Cardiff side who worked hard but were punished for lacking a clinical edge. Joe Hart made two important saves and displayed his quality as the hosts pressed, but it was not enough – despite Josh Murphy’s well-taken strike to equalise.

It’s a worrying sign from Cardiff’s perspective – considering Burnley themselves were far from their best and yet still managed to come through unscathed. Neil Warnock’s side remain one of only three teams yet to win a Premier League match this season, with Huddersfield and Newcastle the other two.

Johann Berg Gudmundsson was instrumental in ensuring this was the case, breaking the deadlock from close-range before teeing up Sam Vokes’ winner with a precise lofted ball into the Welshman’s path. He couldn’t miss. 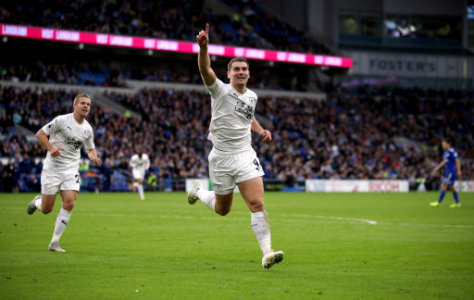 Naturally, the home fans felt aggrieved. Their side had worked tirelessly throughout, fashioned countless opportunities but failed to take them.

Poor once again in the final third, they were even worse defensively: further evidenced by Burnley’s two shots on target resulting in two goals. It’s not going to get much better quickly, either. Tottenham away next weekend, they have Fulham, Liverpool and Leicester in the coming weeks afterwards too.

As quoted by the Guardian:

“It’s a cruel game sometimes, but I can’t fault the effort. I’m disappointed to concede from the only two opportunities they got. At the level we’re talking about, you shouldn’t concede goals like that – it epitomised the whole game that Joe Hart got man of the match. It’s a tough defeat to take.”

Hart was certainly impressive in goal and made an important save, tipping Josh Murphy’s curling effort over the crossbar. Two minutes later, Burnley restored their slender advantage and against the run of play too.

Cardiff had equalised through Murphy’s side-footed finish, which sent the home supporters rocking in search of a quick-fire double. Instead, they were left licking their wounds after yet another defensive mishap which left Warnock frustrated.

Cardiff centre-back Sean Morrison allowed Gudmundsson to run in behind him and Vokes utilised the ample space provided to make no mistake beyond Neil Etheridge.

It was a welcome sight for the visitors, who lost centre-back James Tarkowski (groin) midway through the first-half. Things could have been worse too, given how eventful their domestic campaign has already been with a short-lived European adventure.

They too were poor in possession and appeared awkward in attacking areas, though thankful they managed to capitalise quickly on Cardiff’s defensive mistakes. Hart made an impressive one-handed save to deny Kenneth Zohore in the first 45, otherwise proceedings might have been completely different after the interval.

However, this result is their second consecutive victory and moves them up into 12th place – so they’ll take pride from an unspectacular, dogged win.