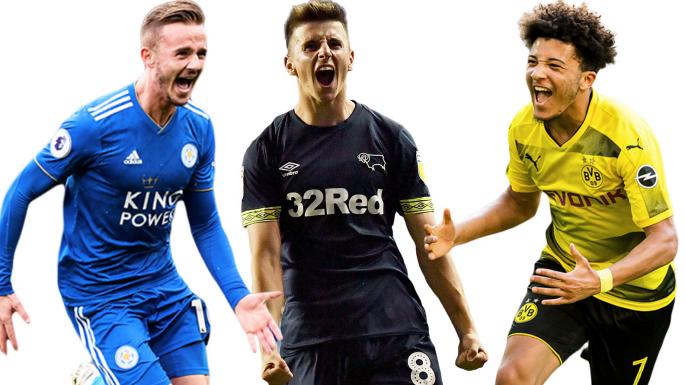 Ahead of this month’s UEFA Nations League fixtures against Croatia and Spain, Gareth Southgate has made a few brave inclusions to his England side – granting three creative talents their first senior call-ups for the Three Lions.

Southgate announced a youthful 25-man squad today, shortly after confirming his contract had been extended through to the 2022 World Cup after an impressive showing in Russia this past summer.

Watford midfielder Nathaniel Chalobah and goalkeepers Alex McCarthy and Marcus Bettinelli are the other uncapped players included, while Ross Barkley has been recalled at the expense of his Chelsea teammate Ruben Loftus-Cheek.

Much anticipation surrounded the potential promotion of teenagers Sancho and Mount following their impressive starts to the campaign in Germany and England’s second tier respectively.

Maddison, 21, has also been rewarded for a series of influential displays with Leicester City, although Daniel Sturridge has been overlooked despite finding goalscoring form for Liverpool from the substitutes’ bench.

READ MORE: James Maddison’s progression is too good to ignore

This latest selection from Southgate is a refreshing change and one that was genuinely needed for England, as questions over their long-term creative spark has continued to rumble in the face of tougher opposition recently.

Naturally, you’d be naive in thinking the talented trio would feature as easily here if players like Alli and Lingard were not conveniently injured at present, but should they impress, there’s no reason why they will not establish themselves as the new breed of talented youth coming through the ranks.

Mount (19) and Sancho (18) are both still teenagers, Maddison is in a different situation to the duo but this news has been a long time coming. It will not matter though, unless they are granted ample opportunities to showcase their ability to a wider audience.

I remember receiving criticism for writing a piece on Sancho and his world-class potential in 2015 (!). He, just like Mount, benefited from progression elsewhere and refused to wait – instead being brave and leaving home comforts in search of first-team football in Europe. This is just the beginning, but it’s already paid off.