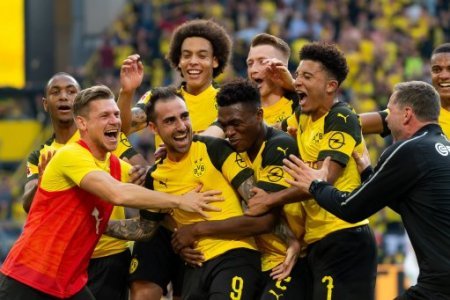 Fresh off the substitutes’ bench with 25 minutes to play, Dortmund loanee forward Paco Alcacer scored a hat-trick – and could have had even more – as BVB came from behind to stun overtly physical visitors Augsburg in a prime example of the Bundesliga’s unpredictability.

Alfred Finnbogason broke the deadlock in the 22nd minute with a close-range finish from an inswinging free-kick which was poorly defended by the hosts. His goal was nonetheless a dubious one, given Marco Reus was pushed to ground in the build-up – though the referee and his assistants deemed no reason to disallow the goal after VAR checks. 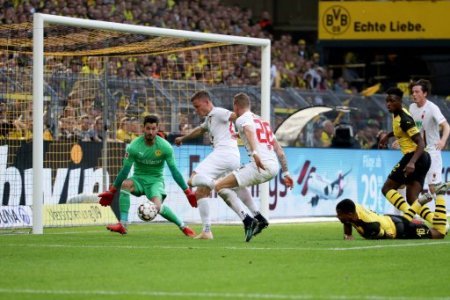 Finnbogason broke the deadlock from close-range after some sloppy BVB defending from their inswinging free-kick. (Picture source: PA Images)

Dortmund’s tempo was fairly slow and laboured in the early going, caused by Augsburg’s effective tactics. They continued to get stuck in, tackling hard and refusing to allow their opponents time to settle on the ball in promising areas of the pitch.

At half-time, BVB were trailing but knew they had several levels to improve upon after the interval. They just needed to roll their sleeves up and work harder to create more clear-cut opportunities on goal.

Manuel Baum’s men persisted in their tireless attempts at winning possession, at all costs. Dutch defender Jeffrey Gouweleeuw was their fourth player in the referee’s book before the hour mark, which is where the game’s complexion completely shifted.

Maximilian Philipp was replaced by Alcacer as Lucien Favre went in search of a more direct goalscoring threat. Within three minutes, the 25-year-old – recalled by Luis Enrique ahead of Spain’s fixtures next week – equalised after being teed up by Jadon Sancho down the right-hand side. He couldn’t miss.

The move was powered by Axel Witsel, who recovered possession in midfield and his immediate thought was to find Sancho in space to his right. The Belgium international did so with a probing through ball, before Jadon looked up and spotted Paco unmarked making a run towards the six-yard box. 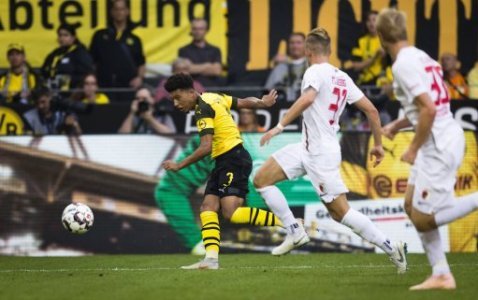 Sancho, called up by Gareth Southgate for England’s senior side this week, provided the inch-perfect delivery for Alcacer to equaliser with. (Picture source: PA Images)

This all started and finished in mere seconds and Augsburg, who had worked hard to this point, found themselves with more work to do if they were to regain the lead.

It didn’t take long, admittedly. Manuel Akanji had a goal-bound header cleared off the line by Michael Gregoritsch at one end and just a minute later, attacking fullback Philipp Max was wheeling away to celebrate at the other.

Dortmund had been warned twice beforehand, particularly when Achraf Hakimi was forced into making a last-ditch block to deny Cauby from close-range. Finnbogason’s teasing delivery into the box was flicked on by Andre Hahn into Max’s path – he made no mistake, slamming home beyond a helpless Roman Burki.

For all their hard work, Augsburg found themselves pegged back once more just ten minutes later. Finnbogason was booked for a tactical foul in the final third, Dortmund were rewarded with their quick thinking by a timely equaliser. Alcacer fired home from Raphael Guerreiro’s lofted pass into his path and suddenly, it was game on once more.

Mario Gotze, making his first Bundesliga appearance of the campaign, came off the bench and had an instant impact. With deft touches and intelligent movement to manoeuvre himself beyond the visitors’ backline, Hakimi’s pass into his path was perfectly weighted as Dortmund were pressing for a late winner. He slotted it beyond Andreas Luthe’s despairing dive.

3-2, Gotze with the winning goal off the bench, only football would write a script like this. Then again, it’s also the only sport which would tear it to shreds just minutes afterwards, completely changing match reports everywhere too.

Having won a corner with three minutes plus stoppages to play, Augsburg were the beneficiaries of yet more poor defending. Alcacer, who already had a brace to his name at this point, went to sleep and failed to stick tightly when marking Gregoritsch. He passed him over towards Akanji without telling him and the rest was history. 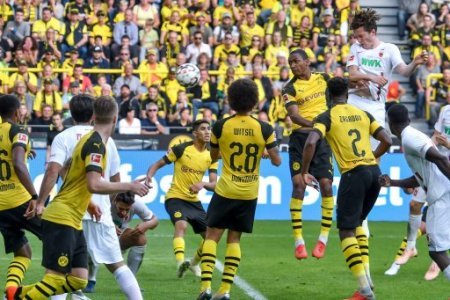 The forward, who made a goal-line clearance earlier, powered a header beyond Burki despite his best attempts to thwart him – levelling the scoring once more and leaving the hosts ruing such sloppy defending.

So perhaps it makes more sense that Alcacer insisted he, rather than fellow substitute Guerreiro, took Dortmund’s final attempt of the match. A free-kick from distance after Sergio Cordova’s high-foot was penalised, he struck the ball sweetly and watched it fly into the bottom corner with aplomb. 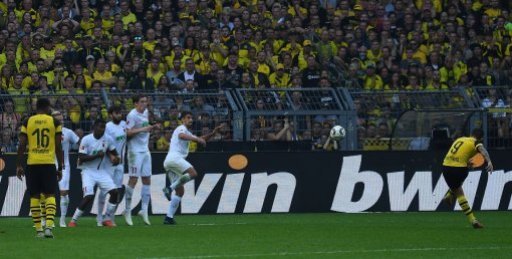