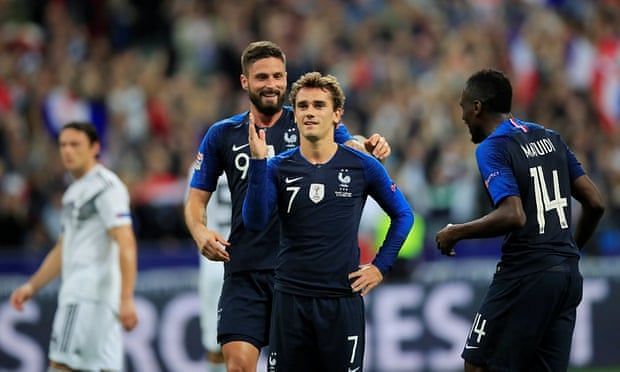 Antoine Griezmann’s timely second-half brace ensured France managed to recover a one-goal deficit to secure all three points during their UEFA Nations League fixture against Germany, leaving Die Mannschaft on the verge of a surprise relegation into League B.

The Atletico Madrid forward equalised with a brilliant header before making no mistake from twelve yards with a neatly-executed penalty effort, following Mats Hummels’ foul on Juventus midfielder Blaise Matuidi in the area.

Despite the hard-fought victory, Les Bleus know they’re capable of playing better and on another day, could have easily lost here. Germany were much improved from their 3-0 defeat by the Netherlands on Friday evening and genuinely looked dangerous in the final third with Manchester City winger Leroy Sane particularly a bright spark. 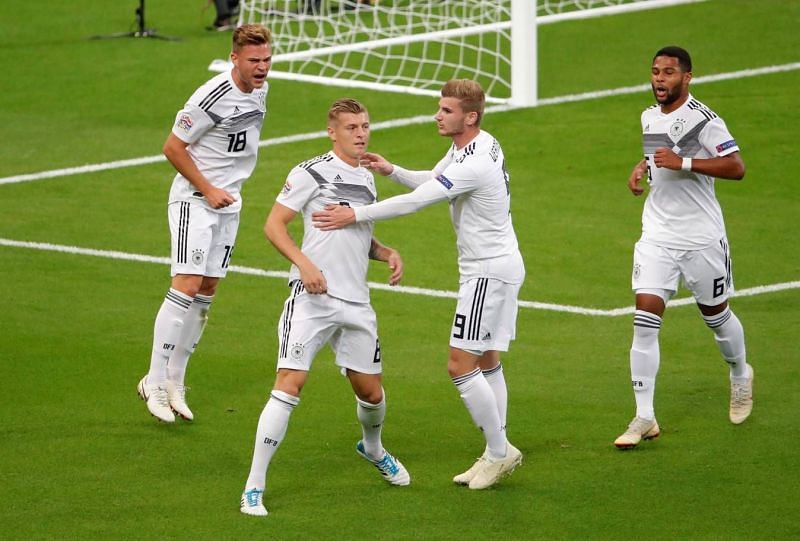 Kroos wheels away to celebrate his well-taken penalty, giving Germany the lead after 15 minutes.

With all of that in mind, here are three reasons why France were victorious during this UEFA Nations League affair: 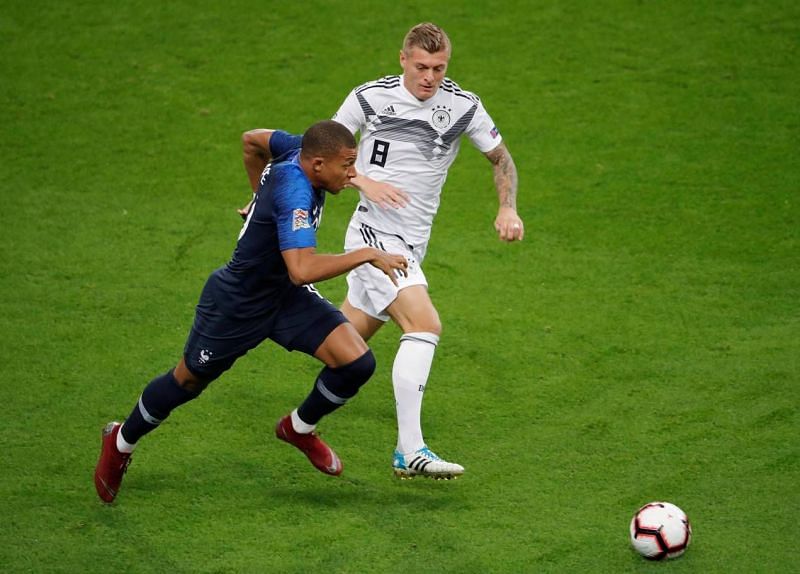 Usually when Kylian Mbappe is playing, he does so with a refreshing air of youthful exuberance and generally speaking, is the type of player you’d happily pay to watch. Here, he was a teenager possessed – particularly after Kroos’ opener – as he knew just how important another positive result was for himself and his teammates.

After scoring one and creating another late on to salvage Deschamps’ blushes against Iceland last weekend, the PSG forward found himself in a similar mood here. Looking to get the crowd on their feet and quickly in support despite trailing for sustained periods, he attacked with blistering acceleration and as usual, proved a real nuisance to Germany’s backline whenever they got near him.

In fairness to Hoffenheim’s Nico Schulz, he did fairly well in trying to marshal the 19-year-old. His deliveries into the box were wasteful and naturally playing at such a fast tempo saw him dispossessed five times.

However, it didn’t faze Kylian, instead prompting him to work harder to create opportunities for team-mates. His link-up play alongside Olivier Giroud was promising, while the fact he was the game’s most fouled player (4) here is no real surprise. Crucially, he played a probing through ball into Matuidi’s path – from which they won the decisive spot-kick. Although he didn’t score here, it was another impressive display from France’s chief creator – forget Paul Pogba.

#2 Lucas Hernandez’s deliveries into the box 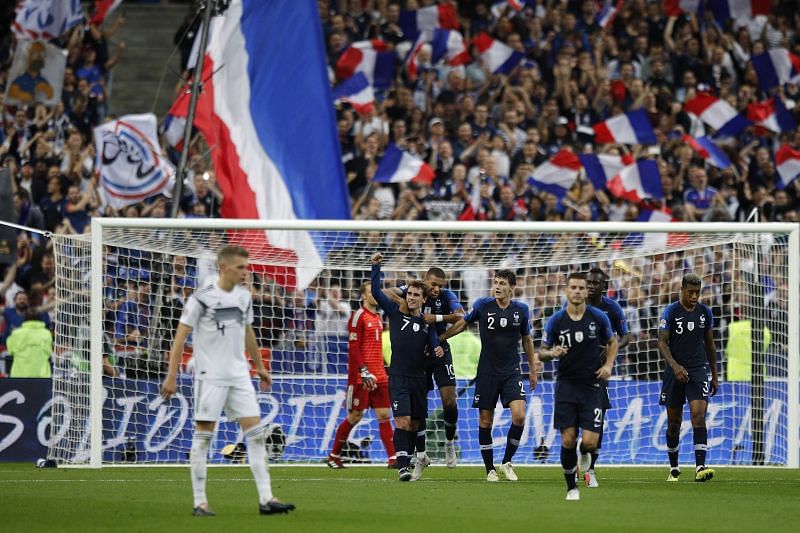 Hernandez (no.21) provided the assist for Griezmann’s equaliser – which set the tone for their comeback

Most of the plaudits for France’s comeback here will go to goalscorer and match-winner Griezmann. After all, it’s justified. But equally important not to forget that if not for Lucas Hernandez, Les Bleuswould’ve probably had to settle for a point like they did during their draw in September.

Why? The 22-year-old was continually offering an additional attacking option down the left-hand side in a France team packed with quality. Playing on the same side as Matuidi, who won a contentious spot-kick, the pair maintained their discipline out of possession with Germany looking to exploit their early success through Thilo Kehrer and Sane.

He completed one tackle, made two interceptions and committed two fouls – which may not seem like much, until you see how he performed further forward. His three key passes were only bettered by Griezmann (4) and Kroos (6) over the 90 minutes and if his attack-minded teammates were more sharp with a bit more power applied, he probably would have created more than one assist.

Olivier Giroud came close, as did Griezmann before latching onto a teasing ball swung into the box. The pace and accuracy was just enough for Griezmann, who still had a lot to do: flicking his header across goal and watching it loop over a helpless Manuel Neuer. 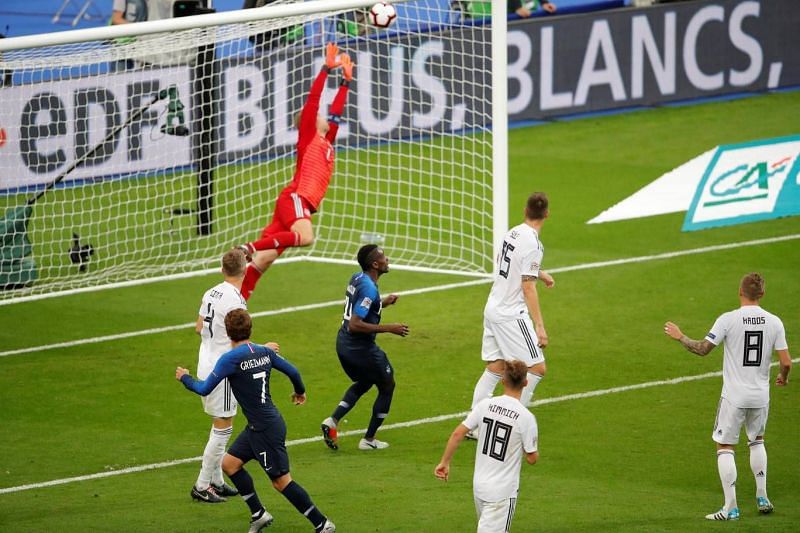 France ran out 2-1 winners here, but the game was changed by two crucial contentious decisions.

Germany’s spot-kick in the first-half was very harsh on Presnel Kimpembe, who was adjudged to have handled a cross fizzed into the box. Then Matuidi was fouled by Hummels, who didn’t win the ball but was equally unfortunate in being penalised – as the 31-year-old actually trod on his sliding foot, thus initiating the contact which saw him go down.

Kroos and later Griezmann both still had to finish their penalty attempts. Hugo Lloris got fingertips to the Real Madrid midfielder’s strike, but Antoine sent Neuer the wrong way to devastating effect with ten minutes to play.

It was another timely strike from a player with world-class pedigree, after his well-executed headed finish – as shown as in the picture above. France needed it too, as anything but a goal would have spurred Germany on to scored again up the other end.