Anthony Martial’s two second-half goals helped United snatch a slender lead, but it was not enough for the visitors during a tense affair at Stamford Bridge – reiterated as tempers flared involving Jose Mourinho on the touchline.

In what was billed as one of the Premier League’s standout fixtures thus far this season, an unbeaten Chelsea side hosted Jose Mourinho’s unpredictable Manchester United – who had already lost three league games this term.

In the early exchanges, the affair was naturally a tense one. Neither side wanted to drop points, but knew their opponent could quite easily lure them into a sucker punch, snatching all three for themselves at Stamford Bridge.

Blues assert themselves early on

The affair was unsurprisingly a tense one, given just what was at stake for both sides. Evidenced by the stop-start flow with which the game endured early on, Chelsea enjoyed large spells in possession and broke the deadlock midway through the first-half.

It seemed typical that somehow, Paul Pogba was the man at fault for the Blues’ goal from a poorly defended corner. Willian fizzed his delivery into the box with pace and Antonio Rudiger headed home with aplomb, benefiting from Pogba’s sloppy marking.

The Frenchman’s reaction told the story: frustrated and looking towards teammates – namely Victor Lindelof – to blame, it typified United’s defensive struggles this season. Their backline, despite impressive individual displays from Luke Shaw, has been increasingly porous this term.

In attack, they failed to get Romelu Lukaku involved against his former employers, while both Anthony Martial and Marcus Rashford were fairly quiet on opposite flanks.

Kepa Arrizabalaga didn’t have a save to make in the first 45 and despite posing a counter-attacking threat, the only memorable time that United looked close to scoring was when Marcos Alonso abandoned his defensive duties, leaving his position to venture forward. Rashford accelerated towards the box but was unceremoniously hauled to ground by Eden Hazard, who took a tactical booking for his side.

Neither side made any alterations to kick-off the second-half but United improved considerably after the interval. They needed to. After all, they were playing away from home against one of their top-four rivals and scrutiny had increased on their performances after an underwhelming start to the campaign across all fronts.

Juan Mata, making only his second league start this term, did well to provide width and present himself as a reliable creative outlet that the visitors were keen to use in transition from defence to attack in an instant. He was increasingly lively, both in-and-out of possession, just like during an inspired display off the bench against Newcastle last time out.

Rashford was doing more to stretch the hosts whenever counter-attacking opportunities were possible, while Martial’s movement proved a nuisance for Chelsea defenders having to constantly track his runs in-behind.

Mata forced Kepa into a good save just seconds before United’s equaliser, which was helped by a huge slice of fortune. Chelsea failed to effectively clear their lines, heading away but only partially clear – while fullback Alonso was writhing on the turf in pain in the middle of the six-yard box.

The ball was flicked back towards the danger area, where Martial was lurking unmarked. Even with Alonso not active, the Frenchman still had to set himself with a good first touch, did so and struck beyond a helpless Kepa to equalise. If Alonso was up on his feet during the build-up there, United would not have scored. Despite some protests, referee Mike Dean waved them away and signalled to the centre-circle.

Martial reacted quickest and made no mistake from close-range, with his marker Alonso writhing in pain on the turf to his right. (Picture source: Yahoo)

The leveller, regardless of how the goal was scored, proved precisely what United needed. It was their first piece of patient build-up play in-and-around Chelsea’s defensive third and they capitalised to ruthless effect. The players were buoyed on further by the visiting fans bursting into song, as they knew that despite not being at their best, they could easily snatch another goal.

David Luiz came close with a glancing header but really should have hit the target from his position, particularly being unmarked after a quick inswinging free-kick was taken, before N’Golo Kanté stung David de Gea’s gloves with a sweet strike from range.

Then just two minutes later, Martial was wheeling away to celebrate his third goal in two starts with the travelling supporters. Teed up by Rashford on the far side, he turned inside his marker before firing goalwards into the bottom corner.

One-two sucker punch. Chelsea were left reeling after missing a few promising chances of their own, and suddenly they had a game to salvage as both sides made changes. Mata was replaced by Herrera in a defensive-minded sub, while Pedro replaced Willian and Olivier Giroud came on in place of an ineffective Álvaro Morata.

Kepa made another important stop, this time to deny Herrera from close-range, before Hazard had a goal-bound effort blocked by Shaw, who was defensively impressive again here.

Time-wasting was a genuine concern from the hosts’ perspective as United took their time for more changes as Rashford and goalscorer Martial were both replaced. Alexis Sanchez and Andreas Pereira were on – it speaks volumes that both were booked in stoppage-time as United were closing in on a smash-and-grab victory.

Cesar Azpilicueta swung a deep cross into the box, which was met by a leaping Luiz. His headed effort hit the far post and trickled back into play before Rudiger flicked the ball goalwards. de Gea made an excellent stop to thwart the German, but could do nothing to stop Ross Barkley from reacting quickest before slotting home.

Cue relief and pandemonium for the hosts, who rescued a point with essentially the game’s last kick. So much so that some overzealous celebrating on the touchline irked Jose Mourinho enough to cause some unsavoury scenes. Welcome back, Premier League. 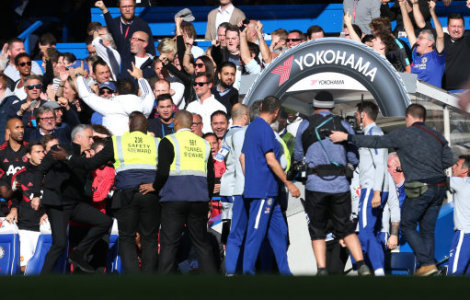