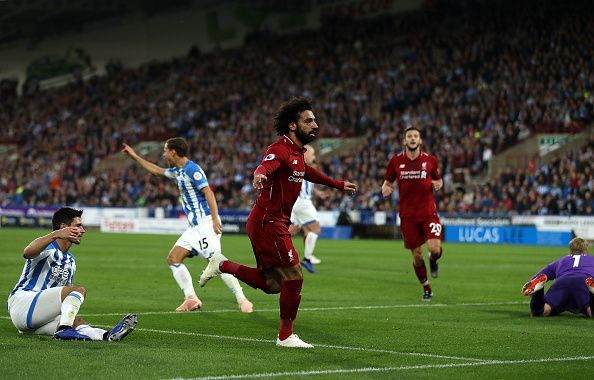 Nine games into the new Premier League campaign, Huddersfield are still winless after a slender 1-0 home defeat by an unbeaten Liverpool in Saturday’s evening kick-off.

Mohamed Salah broke the deadlock after 24 minutes with a tidy finish from close-range, after being teed up by Xherdan Shaqiri.

Despite being a goal behind, the hosts were keen to equalise and use that momentum to their advantage. Jonathan Hogg saw a well-struck effort cannon back off the post, before Alex Pritchard had a goal disallowed for offside.

Laurent Depoitre and Steve Mounie both came close after the break but Huddersfield’s goalscoring efforts were ultimately unsuccessful during a game they could have easily snatched a result from. With that in mind, here are five players who experienced contrasting fortunes during this affair: 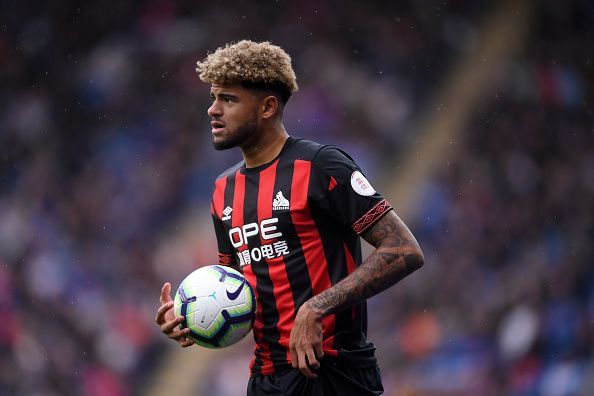 Huddersfield fans and critics alike are beginning to expect more from Billing, who has displayed his ability

For a player of Billing’s current ability and potential, it was an eventful but nonetheless frustrating evening on this occasion.

He has displayed his ability against the likes of Chelsea, Everton and Tottenham already this season but for him to assert himself as a top midfielder in the league, consistency is the next thing on his list of things to develop.

He came close to equalising, firing a free-kick narrowly wide of Alisson’s far post from range. However, his decision-making in dangerous situations was poor and if he had more composure, could’ve resulted in further goalscoring opportunities for the hosts to take advantage of.

His 91.3% pass completion rate was a game-high but there was more he could have done in an attacking sense, particularly after Salah’s opener. Replaced after 70 minutes. 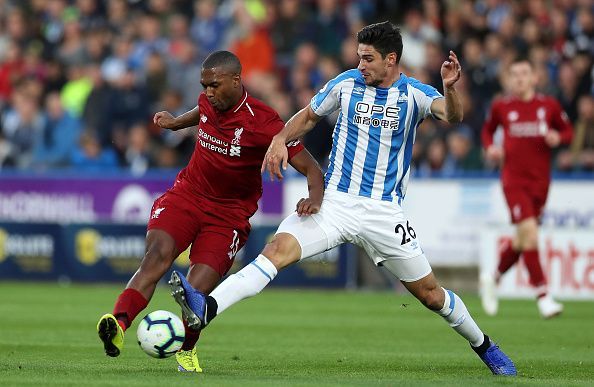 Schindler committing to a tackle, dispossessing Sturridge during a busy evening’s work

The German centre-back was solid as usual here and needed to be against a Liverpool side that posed plenty of counter-attacking threats – even without the likes of Sadio Mané and Roberto Firmino.

Unfairly singled out in the build-up to Salah’s goal, where Chris Sutton suggested he should’ve been tighter when marking the Egyptian, there wasn’t much more he could have done to deny him a goalscoring chance without running the risk of committing a foul and conceding a penalty.

Completed a game-high six tackles, four clearances and an additional interception during a tricky fixture where he had to be constantly alert despite Huddersfield’s misfortunes in-front of goal at the other end. 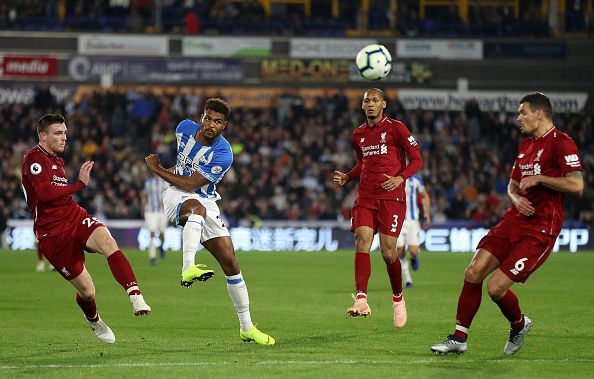 A cameo to forget: Mounie squandered a great chance with time ticking away

Philip Billing’s replacement with 20 minutes plus stoppages to play, Steve Mounie has failed to score a Premier League goal since early April this year against fellow newcomers Brighton. His dismal goalscoring run continues, despite having a great opportunity to rectify that.

You can say Huddersfield were unfortunate to hit the woodwork, see the linesman lift his flag for offside and even force Alisson into an important save from Depoitre. Mounie had no excuse.

Reacting quickest to a loose ball spinning in the area after Dejan Lovren’s unorthodox attempt at a clearance, he rushed the contact and fired over the bar from close-range. If his effort was on target, Alisson wouldn’t have stood a chance.

At such an important stage of the game too, he spared Lovren the blushes after a poor clearance while relieving pressure on their visitors. If he couldn’t score from there, let alone connect and hit the target, they just were not going to finish. 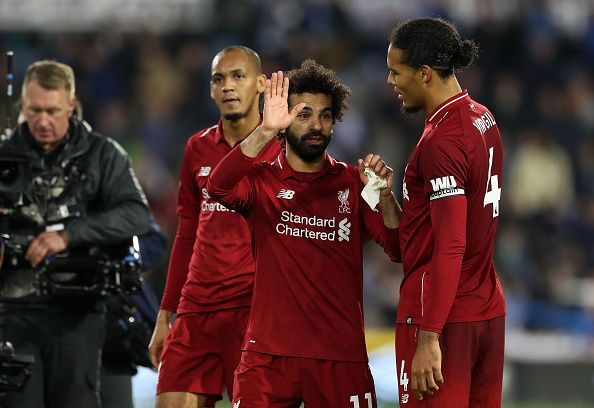 Matchwinner. Salah has been widely criticised in recent weeks and suggestions that he’s off-form have continued to intensify since the campaign began in August. It was an unspectacular performance from the Egyptian, who has certainly delivered better during his spell with the Reds, but a morale-boosting display nonetheless.

His goal was well-taken and neatly finished, tucked away beyond Jonas Lössl’s best attempts, while he showed some encouraging signs of link-up play and intelligent attacking movement that we’re used to seeing from Liverpool’s fan favourite.

His decision-making is still equally erratic at times, evidenced by the fact he was dispossessed and had more unsuccessful touches (eight combined) than anyone else on the pitch here – but the travelling fans will not mind. After all, his strike sealed three points in a frustrating away fixture.

Usually he would have earned top spot here too, but one player stood out even more.. 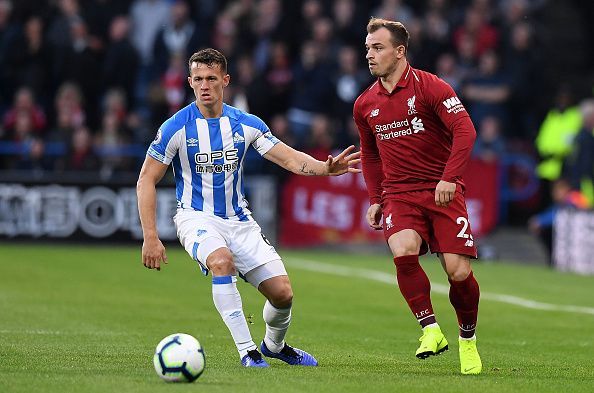 Shaqiri was a nuisance throughout and unselfish in a more creative role, earning his first league start

Having earned his first league start under Jurgen Klopp here, Shaqiri operated on the left-hand side and turned creator in an effective manner – one that will give his manager a selection headache in the weeks to come.

Joe Gomez’s pass into his path was rewarded – he had the vision to spot Salah’s impending run beyond the Terriers’ backline before teeing him up.

He was lively both in possession and off-the-ball, which will have undoubtedly impressed his boss. In terms of passing and overall distribution, he was the Reds’ best statistically (87.3%) and looked to get touches on the ball whenever he could, providing width in a three-pronged attack while cutting inside upon occasion too.

Two key passes, 75 touches, a tackle, two interceptions and a foul committed, he embraced both sides of the game and importantly asserted why he should be given an extended run in the team with matches coming thick-and-fast.