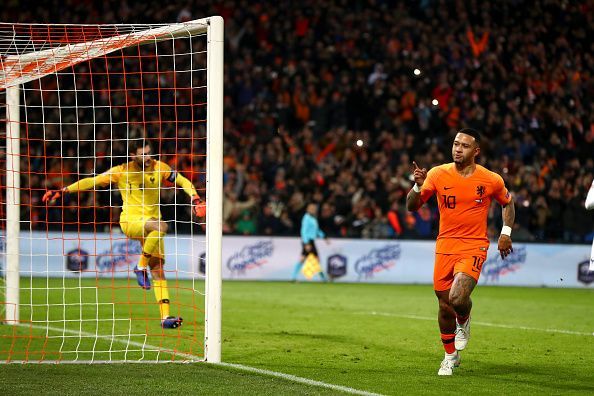 It was a frustrating evening for World champions France, as they were comfortably beaten 2-0 by Ronald Koeman’s Netherlands at De Kuip Stadium in Rotterdam.

Goals from Georginio Wijnaldum and Memphis Depay late in either half were enough for Oranje – whose win here means Germany will be relegated to League B in the current Nations League format.

Didier Deschamps’ side were missing a few key players on this occasion: Samuel Umtiti (knee), Lucas Hernandez (muscle) and Paul Pogba (knock) were all evident absentees through their respective injuries.

However, the overall team display was underwhelming, to say the least and they could have easily been beaten more heavily if not for Hugo Lloris’ goalkeeping heroics during a frustrating night for the visitors.

Holland can still top Group A and secure a semi-final berth, provided they beat Germany in Monday’s fixture. With that in mind, here are 5 things we learned from an impressive Dutch victory: 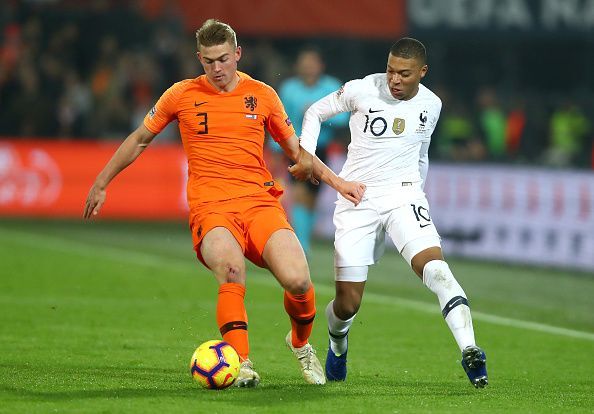 One of the keys to Holland’s success here was keeping Kylian Mbappé quiet. Being a focal point in France’s attacking moves, it was important the hosts dealt with him effectively and isolated him – so whenever he had possession, he would be swarmed, or alternatively, struggle to even get on the ball entirely.

He had 38 touches during the 90 minutes, which was less than all of the hosts’ starting eleven. In matches like this where the opponent is strong in defending as a collective unit, is precisely the type of match that he’d expect to get more involved on the ball and create chances.

However, his teammates struggled for consistency when it came to passing and he regularly cut a frustrated figure, trying to latch onto misplaced passes or angling for a through ball which would never arrive.

His passing accuracy (75%) was not particularly high either, though he tends to try more risky passes with a high reward on offer. Despite being dispossessed on three occasions and having four unsuccessful touches, he was the only France player to complete more than one dribble (3) during a match that they were simply overwhelmed in.

As for Ousmane Dembele, his recent struggles have not yet subsided. He was introduced midway through the second-half but flattered to deceive. 58.3% pass accuracy, dispossessed four times in 25 minutes and booked for a cynical kick out on Denzel Dumfries, this was a cameo to forget for the Barcelona winger. 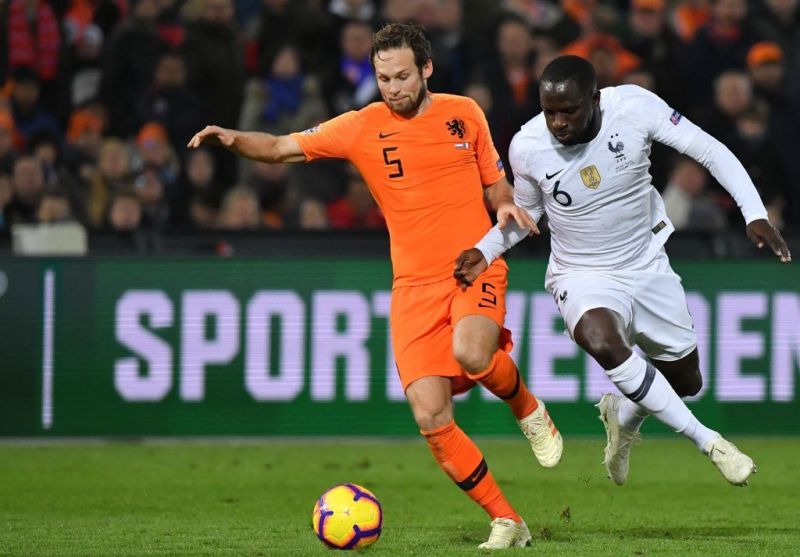 It’s always easier to reflect and say things in hindsight, but when you look deep into Deschamps’ team selection ahead of kick-off – as well as his substitutes, he was setting himself up for failure here.

With Pogba having returned to Manchester for treatment, France’s creative spark in midfield was no longer present. Instead of utilizing Marseille’s Florian Thauvin, or Lyon midfielder Nabil Fekir to replace him, he opted for another defensive-minded player and created a defence-heavy trio.

Matuidi is the most adventurous of the three, but the Juventus midfielder is disciplined enough to remain in his position and not maraud forward unless he’s been given a license to roam.

Roma’s Steven N’Zonzi, who filled in well when required during the World Cup, started alongside N’Golo Kanté and the aforementioned Matuidi. Perhaps a little harsh, it certainly felt as though Lyon’s Tanguy Ndombele did more going forward than all three combined – he was only on the pitch for ten minutes.

The timing of his substitutions and the personnel involved were bizarre. Why Moussa Sissoko when you have better players to choose from on the bench? With a one-goal deficit until stoppage-time, did he really have to wait so long to change things? 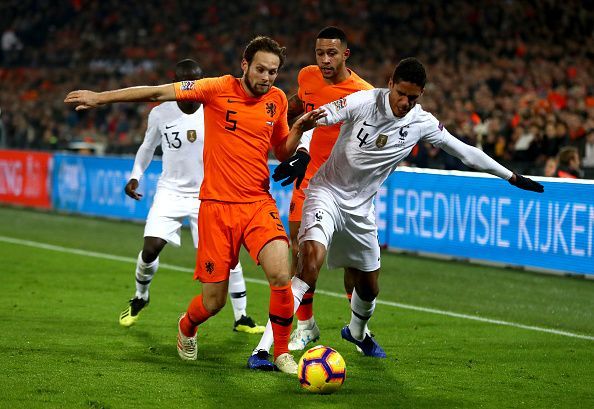 Varane (far right, no. 4) was France’s best defender on a night to forget for the World Cup winners

Although questions will be rightly asked of Deschamps’ team selection and substitutions made, the defensive personnel is something out of his hands. As previously mentioned, injuries to key players meant that both Umtiti and Hernandez – starters in Les Bleus’ backline – were unavailable here.

That Manchester City’s Benjamin Mendy, typically seen flying down the left-hand side for the Premier League champions, just underwent successful knee surgery adds to the injury woes that Didier had to deal with pre-match on this occasion.

Even still, this defensive experiment backfired and in a big way. Holland created chances at will and although they were collectively brilliant, it made for worrying viewing from France’s perspective. Just how easily they conceded possession at times or gave their hosts an opportunity to create chances, was not good enough.

Presnel Kimpembe, despite his ability, was shaky. Everton’s Lucas Digne, who has impressed this term in England, was encouraging in attack but struggled to cope with the Dutch attacking onslaught at times. Benjamin Pavard, who is normally so mature and composed, was anything but.

The only defender who covered himself in glory was Real Madrid’s Raphael Varane, who coincidentally has struggled for form this term. He too was far from perfect, but during a game they were conceding chances with relentless frequency, it’s to be expected.

Kanté’s 7 tackles was unsurprisingly a game-high, though N’Zonzi’s inadvertent involvement for Wijnaldum’s goal set the tone. 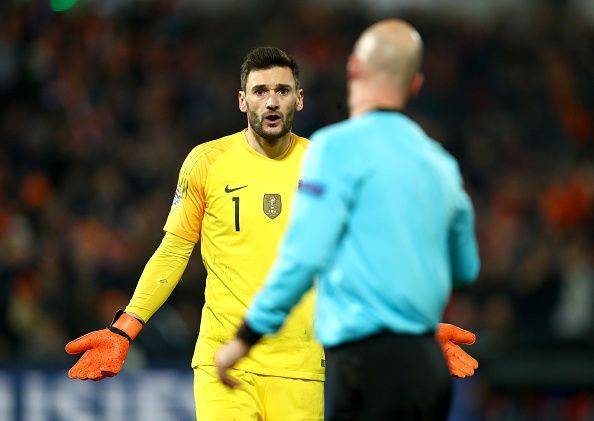 Despite his world-class ability, Hugo Lloris and his occasional questionable decision-making often cause doubt in critics’ minds. Is he really that good anymore?

At 31, the Tottenham captain is showing no signs of slowing down and even after Alphonse Areola’s impressive debut earlier this term against Germany, his older counterpart has reacted in precisely the right manner – delivering even more for his country.

On this occasion, he made nine saves and was unfortunate to have not kept a clean sheet in all honesty. Wijnaldum’s opener fell fortuitously for the Liverpool midfielder after Lloris initially denied Ryan Babel’s close-range effort, while Holland’s second was a coolly-taken penalty that Sissoko needlessly gave away.

His diving stop to deny Frenkie de Jong and Depay late on were the pick of the bunch. Unfortunate to end up on the losing side, he remains France’s undisputed first-choice and will be hoping he doesn’t have to replicate such heroics too often in an ambitious Tottenham side this season. 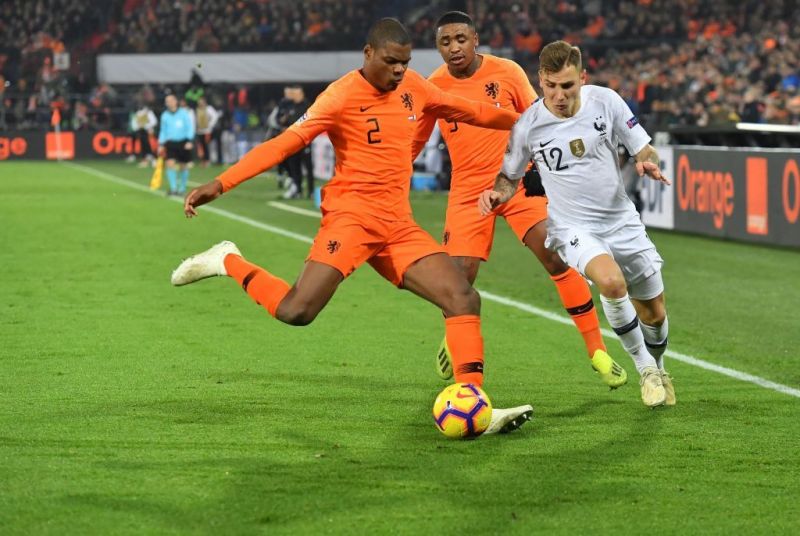 Memphis Depay has been performing like a man on a mission and is finally getting the worldwide recognition he deserves for doing so. Lyon’s best player last term, the 24-year-old has continued the 2018/19 campaign in a similar vein and naturally, is expected to replicate the same at international level.

His intelligent movement, decision-making in the final third and ability to seek out teammates with precise passes was on display again here – an excellent SIX key passes created during the 90 minutes. The Panenka penalty in stoppage-time was merely icing on the cake, topping a fantastic performance with a well-deserved goal.

As for PSV right-back Denzel Dumfries, he too impressed – buoyed by the home supporters, who could see he was keeping the hosts at bay and equally threatening when accelerating forward.

Winning a game-high six aerial duels; he was fouled four times, made four interceptions, two tackles and can count himself unlucky not to have scored too. Lloris thwarted him with a double save after he came close, initially heading goalwards at the back post.

Frenkie de Jong is heavily courted by Europe’s top sides. You only need to watch his performances in matches like these to quickly see why. It was a confident showing from a 21-year-old who seemingly has the world at his feet. Playing alongside Marten de Roon as part of a holding midfield duo, he embraced his defensive responsibilities yet looked to constantly get on the ball and start attacks.

A game-high 112 touches and 95 passes (92.6% pass accuracy) essentially tells the story of Holland’s dynamic metronome. His fantastic passing range was on display for all to marvel at, while his movement in transition had France players backpedalling. Lloris was forced into an excellent diving stop to deny him a stoppage-time strike before he won the spot-kick – being bundled over by substitute Sissoko from the resulting corner.