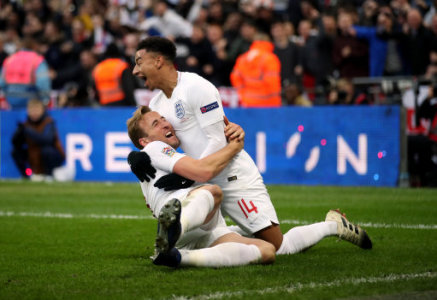 Late goals from Jesse Lingard and Harry Kane sealed a dramatic comeback for England, who secured their place in next summer’s UEFA Nations League semi-finals at Wembley.

Lingard equalised with a tap-in off the bench – just minutes after making a goal-line clearance at the other end to deny Domagoj Vida’s goalbound header.

Kane, who missed two prior opportunities, made no mistake when latching onto Ben Chilwell’s free-kick delivery to slot home inside the box. Ending a run of 747 minutes without one, the goal was Harry’s 20th international strike: joining esteemed company as the 23rd player to reach the milestone.

Hosts dominant but without goals to show

Despite an early backpass scare during the early exchanges, England were fully in the ascendancy and could have been 2-0 ahead inside 15 minutes at Wembley.

Raheem Sterling was thwarted from close-range by Gent’s Lovre Kalinic, before Harry Kane missed the target completely at the far post minutes later.

Ross Barkley and Fabian Delph started as part of Gareth Southgate’s midfield trio – both were encouraging early on. Barkley’s deft flicks and intelligent touches helped link up play between midfield and attack – while Delph displayed excellent poise and vision to weave past two challenges and set club teammate Raheem Sterling through on-goal. 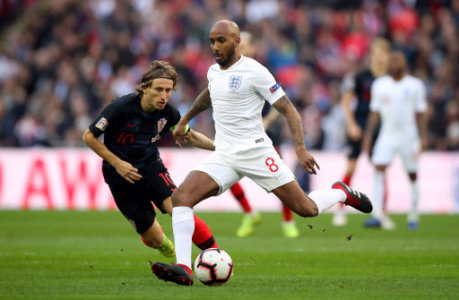 Delph was a surprise inclusion in Southgate’s starting eleven, but flourished as part of a midfield trio. (Picture source: PA Images)

Kalinic anticipated the danger and clattered Sterling, before Kane had an effort blocked and another strike saved seconds later.

The hosts were dominant in the early going, just like their World Cup semi-final over the summer – but Ivan Perisic and Ante Rebic provided a timely reminder that things could quickly change. 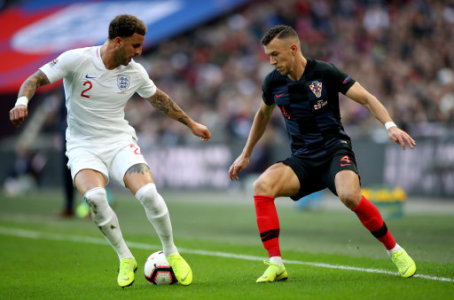 Perisic (right) was a continual problem that Walker had to remain alert to, down the flanks. (Picture source: PA Images)

Inter fullback Sime Vrsaljko made an important defensive intervention to deny Marcus Rashford’s marauding run inside the box, sliding across the turf with an outstretched leg to emphatically stop him in his tracks.

However, having played a full 90 during their 3-2 win over Spain, the 26-year-old was feeling the effects. Replaced by Anderlecht’s Antonio Milic, England continued to press patiently in search of an opening goal.

They couldn’t find one before the break, so the second-half was going to be even more important: England had to win or face relegation from the Nations League’s top tier.

Ante Rebic, wasteful with a handful of promising opportunities, was replaced at the break for Wolfsburg’s Josip Brekalo.

Sterling was once more denied in-front of goal, while Rashford’s blistering runs forward were met with an underwhelming end product in truth. Then, just as previously warned, Croatia stunned their hosts to break the deadlock just before the hour mark.

Andrej Kramaric showed good composure to weave beyond a few block attempts before striking goalwards. The effort took a wicked ricochet off Eric Dier before flying over Jordan Pickford towards the corner.

1-0 down, England suddenly had a mountain to climb. You wouldn’t have known it though, given the lull in their play after conceding.

Jadon Sancho and Jesse Lingard were introduced in place of Rashford and Delph. The latter found himself in the right place at the opportune time to equalise with a tap-in after Kane’s tame effort trickled beyond Kalinic. 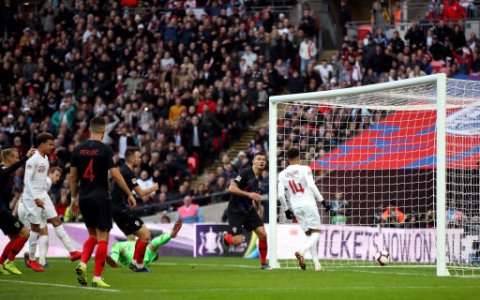 Lingard was in the right place at the perfect time to equalise with a timely tap-in after Kane’s tame effort trickled goalwards.

Even still, a 1-1 draw favoured neither side as Spain would be going through to next summer’s semi-finals if the result remained the same – both needed to attack in search of a late winner.

Croatia almost had it too: Domagoj Vida had a header cleared off the line by Lingard, before England players responded with purpose as the Wembley crowd spurred them forward.

Jedvaj was penalised for a lazy foul on the far side, presenting another promising chance late on. Ben Chilwell’s inviting delivery was fizzed into a dangerous area and as players watched it flash across the box, Kane anticipated it well before latching onto the ball, slotting home in the bottom corner.

Despite Croatia’s best efforts to equalise, England were far from subtle in wasting time and saw off the game with sensible game management.

What does this mean?

Gareth Southgate’s side join Euro 2016 winners Portugal in securing their qualification place – while World Cup winners France and Belgium, who finished third in Russia, are poised to join them.

The final four will be concluded on Monday, as Germany-Netherlands and Belgium-Switzerland are both upcoming fixtures which could have an impact on the final League A standings in their respective groups.

The Nations League Finals draw will take place on December 3, ahead of the games – which are scheduled to be held in Portugal next June.