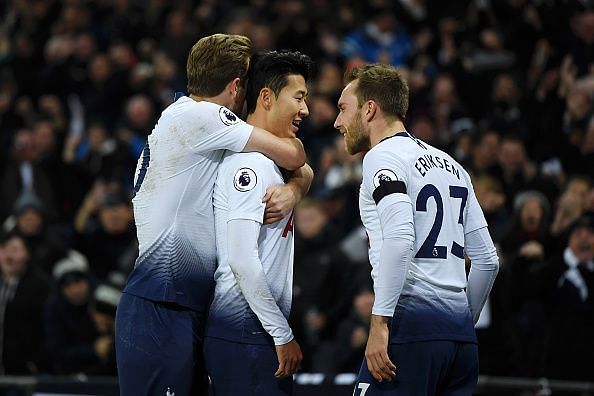 Tottenham ended Chelsea‘s unbeaten Premier League start with a commanding 3-1 victory at Wembley on Saturday evening. Goals from Dele Alli, Harry Kane and Son Heung-Min sealed all three points for Spurs, but what are five key talking points from the action-packed affair at Wembley?

Olivier Giroud pulled one back late on with a well-timed header from close-range, after Cesar Azpilicueta’s pinpoint cross was steered goalwards by the French substitute – on to replace a rather ineffective Álvaro Morata.

Kane and Son in particular both squandered promising opportunities, but Mauricio Pochettino will nonetheless have been happy with his side’s display with a crunch Champions League group stage clash against Inter to come in midweek.

With that in mind, here’s a look at five talking points from Tottenham’s action-packed victory here: 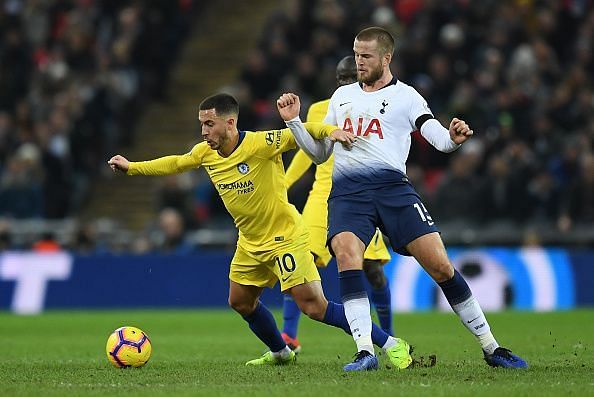 Since then though, his form has taken a gradual dip – which is to be expected – but their reliance on the Belgian’s efforts in the final third has become increasingly evident.

He’s now only been directly involved in one goal since their 3-0 win over Southampton in early October, which isn’t good enough for a player of his quality. Particularly during big matches like these, where individual brilliance can often settle games within an instant.

Although he was one of the hosts’ best performers on a forgettable evening here, he still failed to display his full attacking potential and quickly cut a frustrated figure. Spurs capitalised as Chelsea started slowly across the pitch and their quick-fire double visibly stunned Maurizio Sarri’s men.

Hazard’s two key passes, three completed dribbles and overall threat down the left-hand side were posing a threat that Tottenham had to be weary of – though they dealt with him better than expected. He was fouled twice and dispossessed on SIX occasions, a game-high. 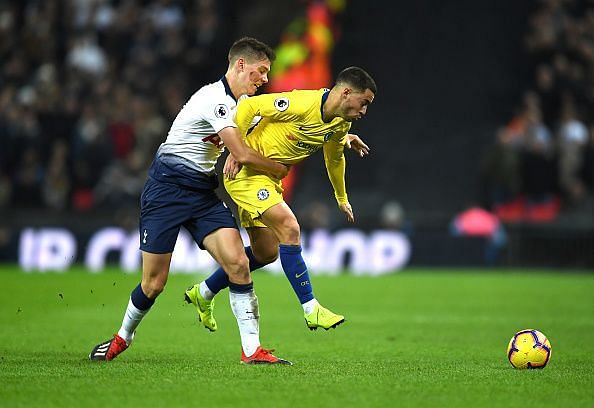 Before kick-off, Mauricio Pochettino was asked about his team selection and if there was a particular reason why Jan Vertonghen was a substitute – not least with 20-year-old Argentine centre-back Juan Foyth starting here. He smiled briefly, before stressing the youngster had an opportunity to shine during a strenuous three-game week schedule for Tottenham.

Foyth did precisely that on this occasion, against one of the league’s best attacks. He completed three tackles, a whopping seven clearances and committing two fouls during an encouraging showing at the back.

Chelsea, despite their early collapse, continued to provide goalscoring threat throughout the match and he needed to be alert. If not for some important defensive interventions from him under pressure in his own box, the Blues could’ve scored earlier than they eventually did – Giroud’s goal came after 85 minutes.

Although arguably fortunate not to have given away a spot-kick after unceremoniously challenging Hazard in the first-half, he crucially showed bravery and an eagerness to defend for the cause when Chelsea had spells of dominance in possession.

Having made his senior Argentina debut in midweek – earning the Man of the Match award – he justified Pochettino’s faith with an assured display and proved why Spurs are set for seasons to come in defence, with the injured Davinson Sanchez (22) another one to enjoy. 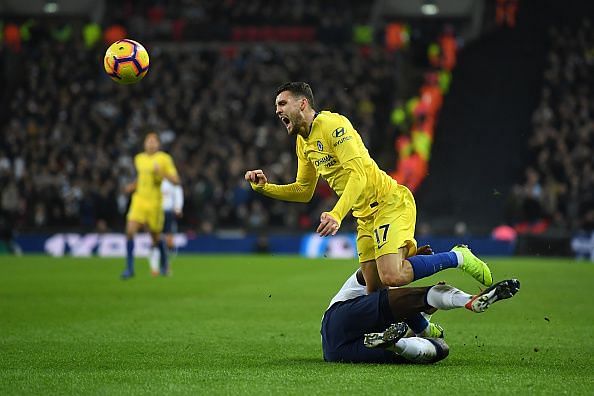 Usually during a fiercely-contested derby such as this one, the top performers and their respective qualities are heralded by fans and critics alike.

Just a day after N’Golo Kanté agreed terms to become Chelsea’s highest-paid player on a new £290,000-a-week contract extension in west London, his compatriot and midfield counterpart Sissoko outshone him on this occasion.

Imagine me saying that, after this most recent international break. Sissoko was a surprise substitute and gave away a penalty during France’s Nations League defeat by Holland last weekend.

Many criticised Didier Deschamps for his changes and the timing of them, but 29-year-old Moussa has been a target for ridicule across Europe in recent seasons with a £30m price-tag hanging over his head.

This season marks the third since his surprise deadline day switch from Newcastle to Spurs, where he wanted to see career progression and compete in the Champions League.

With performances like these at the base of midfield, there’s no reason why he cannot. Four tackles, an interception, 82.9% pass accuracy (35 passes), one key pass and completed dribble – an impressive display during Tottenham’s biggest game to date. Critics have quickly apologised, naturally, but time will tell whether he’ll continue like this or flatter to deceive once more. Silly, naive, inexcusable. These are some of the words being used to describe David Luiz’s individual display during a match which perfectly highlighted the Brazilian’s defensive flaws once again.

We’re aware he is a fantastic passer with excellent range and vision to match. Comfortable on the ball and prepared to put his body on the line, fair enough. But his decision-making, at 31-years-old? Still heavily inconsistent. Here was no exception.

Only Marcos Alonso (95) had more touches than his 81 over the 90 minutes, despite having the backline’s worst pass accuracy rate at 84.9%. He may have completed two tackles, four interceptions and four clearances – but most of them were either a direct result of his own mistakes, or covering up for a teammate’s poor positioning.

In this case, Antonio Rudiger didn’t prove much help as a calming influence at the back. But the German was booked early on and didn’t appear to trust his centre-back partner enough to settle after Spurs’ sucker punch.

For the first goal, he needlessly gave away a soft free-kick. That’s typical Luiz of old – being rash and reckless. Alli’s header was too powerful for Kepa to thwart, despite getting fingertips to it.

Tottenham’s second was hopeless. Kane’s strike from range flew goalwards and instead of stepping forward to block, he flinched and moved directly away from the shot, leaving his goalkeeper unsighted.

But their third was by far the worst. Son’s slaloming run into the box was an adventurous one but rather than coming across and standing him up, or showing patience with a tackle attempt, the Brazilian ran full speed at him and saw the ball knocked straight past on his way to an easy one-on-one chance.

Sarri said he was pleasantly surprised by Luiz upon his arrival over the summer, while Antonio Conte’s decision to freeze him out completely was a major talking point during his final few months in charge. With a dismal performance like this, perhaps it’s time for Andreas Christensen to get an extended run-in the team after all. 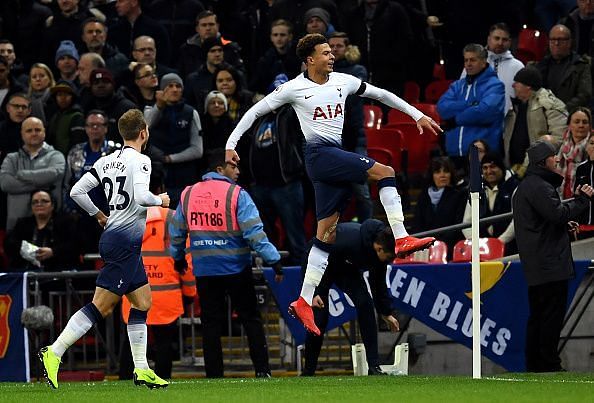 By now, everyone knows Christian Eriksen’s a world-class player. One of Tottenham’s key cogs, he displayed his worth with another memorable performance against a big rival in a significant way here.

He created both their first-half goals, the first an inviting delivery from which Alli could not miss – the second a smart pass into Kane’s path, who let fly from range and earned his reward against a sleepwalking Chelsea defence.

To further hammer home his influence, his stats at full-time read: A game-high seven key passes, 89.2% pass accuracy (team-high), one dribble, tackle and interception, no fouls committed. Another excellent display from the Spurs maestro.

Meanwhile, his midfield teammate Dele Alli will be hoping his headed strike proves welcome momentum that he needs to step up with big matches coming thick-and-fast.

After a productive showing on international duty with England over the past week, he needs to use this display as motivation to see a surge in his form ahead of Christmas – having struggled with troublesome injuries and inconsistencies this term. Spurs need their best players firing on all cylinders, if they’re to mount a successful title challenge and stay among Europe’s elite in the Champions League.