First-half goals from Juan Bernat and Neymar sealed all three points for Paris Saint-Germain against a disappointing Liverpool side, ensuring they remain in the Champions League while leaving Group C wide open ahead of matchday six.

PSG knew nothing but a win would suffice in their quest for top spot in Group C. Against an unpredictable Liverpool side, they wanted to exact revenge after their 3-2 defeat in September.

The hosts began brightly with attacking intent in abundance and could’ve been 2-0 up after just ten minutes. Ángel di Maria forced Alisson into a good save as he struck a swerving effort goalwards from range. Kylian Mbappé came close too, just minutes after captain Thiago Silva had a free header unmarked from an inswinging free-kick.

PSG finally earned the goal their early dominance deserved, albeit in disappointing circumstances from Liverpool’s perspective.

Mbappe’s attempted through ball from the left-hand side was intercepted by Virgil van Dijk, but fell for left-back Juan Bernat in space with the goal opening up for him. Liverpool’s backline reacted too slowly in their attempts to close the Spaniard down, who slotted a low strike beyond an unsighted Alisson into the bottom corner. 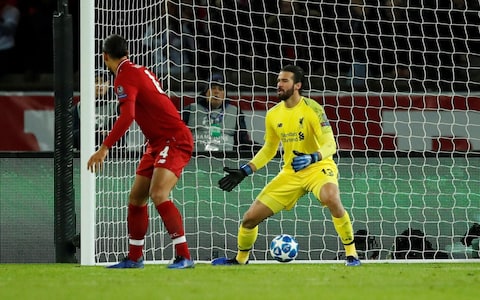 A flat-footed van Dijk can only watch on as the ball trickles beyond Alisson. (Picture source: Action Images)

Marco Verratti, suspended during their previous meeting, played a pivotal role during the build-up to PSG’s opener.

There, he left all three Liverpool midfielders in his wake as he deftly manoeuvred beyond their challenges and passed forward. Despite his world-class ability, he was fortunate not to be given a straight red card after harshly tackling on Joe Gomez.

It was going to be a long evening ahead for Jurgen Klopp’s men, who were sloppy in possession and clearly tentative to go forward. Justifiably so, given just how easily the Mbappe-Neymar combination was working in transition.

Then, it just got worse. Neymar accelerated forward with purpose after Liverpool squandered possession deep in the PSG half and linked up well alongside a marauding Mbappe to leave Dejan Lovren and co for dead sprinting towards goal.

Kylian was unselfish and picked out Edinson Cavani’s run into the box with an excellent pass – Neymar pounced on the rebound after Alisson saved well from the Uruguayan’s close-range effort. 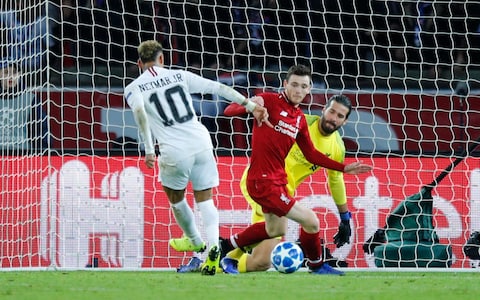 Neymar made no mistake from close-range to gift PSG a two-goal advantage. (Picture source: AP)

Liverpool lacked the attacking verve that we’ve become accustomed to seeing in England’s top-flight. However, Sadio Mané – their best attacking performer – proved himself a handful for PSG to contend with and won a penalty on the stroke of half-time.

Hassling Marquinhos before dispossessing the Brazilian in midfield, he accelerated forward towards the box with PSG players frantically hurrying back.

Then, he was hauled down unceremoniously just inside the box by di Maria’s wild sliding challenge. It was a needless tackle by a winger who sensed danger too late and in a last-ditch attempt to recover, went to ground.

James Milner stepped up and made no mistake, sending Gianluigi Buffon the wrong way to slam home and halve the deficit in stoppage-time. 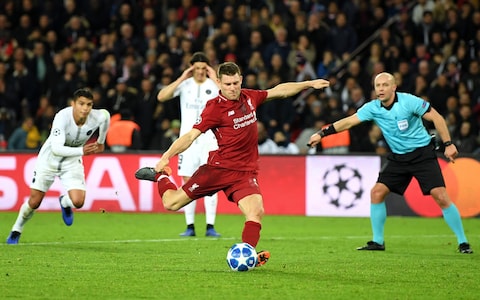 Neither side made any alterations at the half-time interval, though Liverpool were aware that Milner’s penalty strike had granted them a lifeline – rather than damage limitation – to look forward to after the break.

However, their hopes of salvaging a credible result were almost shattered within minutes of the restart. Marquinhos evaded the attentions of his marker to flick a headed effort into the bottom corner from another dangerous inswinging free-kick delivery, but the linesman correctly flagged for offside.

Presnel Kimpembe, who defended well for the most part, almost presented the Reds with an opportunity to equalise. Unnecessarily taking liberties in possession, he squandered it on more than one occasion as his lax approach when building from the back saw Mohamed Salah keen to benefit.

Although Liverpool failed to create many clear-cut chances, this was mainly down to the excellent defensive interventions made by captain Thiago Silva.

He worked hard, making numerous important clearances and frustrated the visitors’ frontline – easier said than done in a tight game like this.

Thomas Tuchel opted to change formation and tactics on more than one occasion during the second-half, with his side in the lead but equally vulnerable to conceding again on a counter-attack.

Dani Alves and Eric Maxim-Choupo Moting were both introduced, clearly showing his reluctance to attack with as much regularity with time ticking down. Mbappé – clearly not 100% – was also replaced by Adrien Rabiot, whose days in Paris seem increasingly numbered as his contractual situation rumbles on.

Alisson was forced into another important save, this time from Marquinhos’ powerful header, having towered above both Lovren and Jordan Henderson inside the box.

It was his combined defensive effort alongside Silva which earned the loudest roar from within the ground though, after the Brazilian pair did a chest bump. Celebrating each defensive action like a goal, they did well to pump up the crowd but equally keep Liverpool at bay, which was important as tired legs became a factor.

They held firm as expected to secure all three points, a big sigh of relief and with Red Star Belgrade away on matchday six, a golden opportunity to secure top spot.