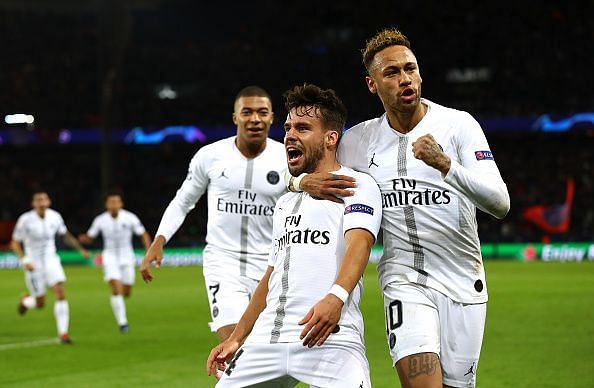 PSG blew Group C wide open after exacting revenge on Liverpool to earn a morale-boosting 2-1 win over Jurgen Klopp’s side on Wednesday evening. Which players struggled while others excelled at the Parc des Princes?

First-half goals by Juan Bernat and Neymar sealed all three points for an inspired Paris Saint-Germainagainst a disappointing Liverpool side, ensuring they remain in the Champions League while leaving Group C finely poised ahead of matchday six’s fixtures next month.

PSG knew that defeat would have seen them drop down into the UEFA Europa League knockout stages – something simply remarkable even with the tough competition in Group C this campaign.

Against an unpredictable Liverpool side, who struggled to cope with their relentless energy early on, they exacted revenge after a 3-2 defeat by Jurgen Klopp’s men in September.

James Milner’s penalty strike in first-half stoppage-time provided the visitors a lifeline, rather than a quest for damage limitation, during a half where they were regularly second best and had goalkeeper Alisson to ultimately thank for keeping the scoreline down.

With that in mind, who struggled while others excelled at the Parc des Princes? 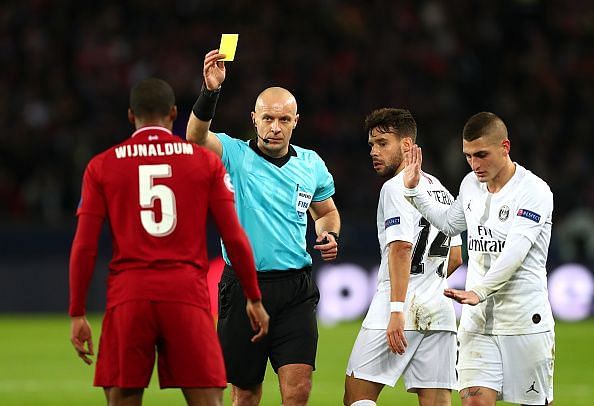 Disappointing display. After such an impressive showing for the Netherlands during the most recent international break, the 28-year-old flattered to deceive big time on this occasion.

Against top opposition, he was seemingly non-existent in midfield. Failed to make a tackle, interception, clearance or block – no memorable defensive contributions from someone in a midfield trio that really struggled. Questions over Jurgen Klopp’s team selection and whether he should have adapted his formation accordingly to man-mark Marco Verratti in particular standout.

Wijnaldum probably would have been tasked with that job, given his energetic style. Instead though, he was often out of position and caught out in transition – while losing possession regularly when he tried to play forward so adopted a cautious approach and recycled the ball backwards instead. Had a game-high 94.1% pass accuracy, but it didn’t count for anything.

Unsurprisingly, he was the first to be replaced midway through the second-half. He’s 28 – not getting any younger – these are precisely the matches he needs to justify starting ahead of players like Naby Keita in midfield. He featured for 25 minutes and did more. 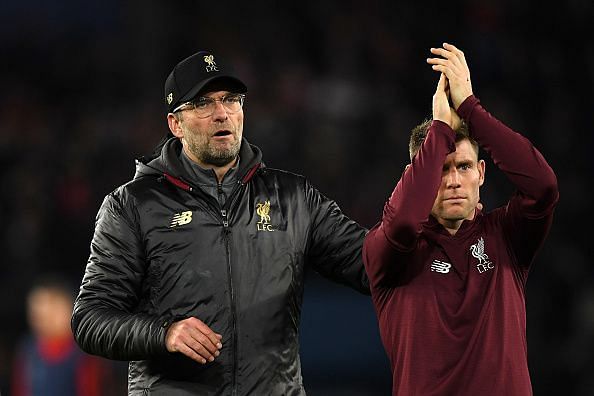 Milner and Klopp applaud the travelling Reds at full-time

Reliable as ever. The 32-year-old was tenacious in the tackle, one of few players prepared to take risks and worked tirelessly throughout. Was replaced with 15 minutes to play as Klopp went in search of more attacking impetus – yet provided more going forward than Salah, Firmino and Mane combined.

Speaks volumes, really. He completed three key passes and naturally his passing accuracy (70.7%) wasn’t as accurate but it comes with the territory when taking more risks in possession.

Highlighted just how comfortable he was during a high-pressure game, where he was unafraid to harass Neymar and press PSG’s talisman into mistakes and make things uncomfortable for him at times.

Stretched the hosts with some good link-up play down the right-hand side in the first-half and although his influence weaned after the break, he was Liverpool’s best performer. Showed composure to make no mistake from the penalty spot and remains an underappreciated player in a Liverpool team with multiple flaws still to iron out.

A game-high six tackles completed and interception to boot, can count himself unfortunate not to have been on the winning side here. 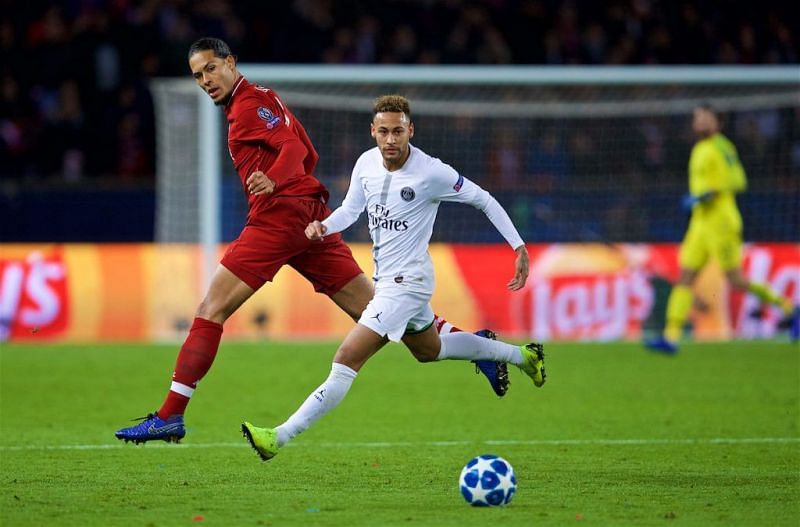 For a £75m defender, these types of performances are just not good enough. Yes, he has enjoyed an impressive season thus far for club and country – but against this quality of opposition, you cannot afford to make the mistakes he did here.

Partly to blame for PSG’s opener, he switched off after making an initial interception which allowed Juan Bernat a free shot on-goal. As shown in the action replays, he was flat-footed and seemingly ball-watching – just like Lovren and Gomez – too sluggish to react quickly and stop the Spaniard in his tracks.

Crucially let Mbappe’s fizzed delivery for their second goal flash straight across him with Edinson Cavani lurking and Neymar made no mistake for the rebound.

Committed three fouls – only Marco Verratti had more – made only one tackle and two clearances throughout the 90 minutes. At times he displayed some good signs of anticipation to deal with danger in deep areas, but was also naive with his positioning and caught out on more than one occasion.

Is that harsh? Perhaps, but for a player constantly heralded as one of the world’s best defenders, he has to do better. In a game like this where intricate moments often decide games, he failed to cover himself in glory while other defenders thrived. 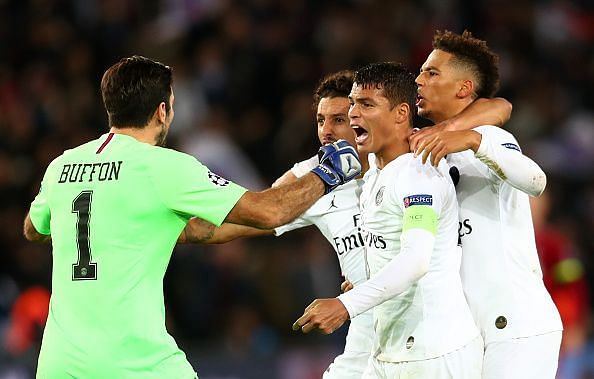 Speaking of other defenders, PSG captain Thiago Silva was excellent here and although routinely criticised for playacting, wasting time and the like, he knew exactly what he was doing.

It was all about time management, earning his teammates some important respite after dealing with Liverpool’s second-half pressure.

He proved himself an important figure defensively, just like Chiellini against Valencia on Tuesday evening. Provided his defensive counterparts with confidence and reassured them they would win.

Whenever in a precarious situation, he didn’t panic. Instead, he was ever-present at the back to make important challenges before turning to the crowd and encouraging them to roar his teammates on.

Just like Chiellini, it was a defensive display where you can tell he has helped those around him settle and improve upon some nervy moments – Presnel Kimpembe’s insistence to relinquish possession needlessly in his own half a good example.

He was eager to get on the ball – only Marquinhos and Neymar had more touches than his 72. He completed two tackles, two interceptions and a whopping game-high 11 clearances over the 90 minutes while doing his utmost to frustrate the travelling Reds, successfully.

Was fouled on four occasions and bided his time well with a mixture of composure and game management in the second-half. Although he engaged in the “dark arts”, he did it well and had Liverpool been winning, it’s exactly the thing they would have been praised for – knowing how to close out a result. 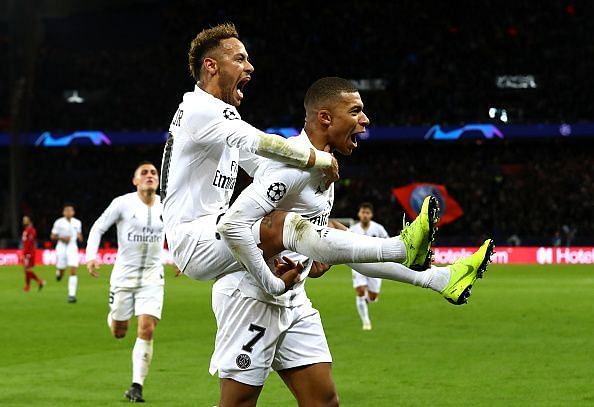 Last but certainly not least, it’s matchwinner Neymar. He was in the right place at the right time to score the second and although his decision-making was erratic at times, his link-up play alongside Kylian Mbappé was a joy to watch in transition. The pair created many half-chances and ran the Reds’ backline ragged with their intelligent movement but importantly, Neymar showed why he’s the star of this team.

It was his marauding run forward, deep in his own half, which proved pivotal during the build-up to PSG’s second, after the visitors conceded possession and he accelerated with purpose. Cavani’s close-range effort was saved by Alisson but fell conveniently for the 26-year-old to convert – his 14th goal of the season across all competitions.

In the second-half, things were more difficult as Liverpool pressed for an equaliser and manager Thomas Tuchel looked to change things both tactically and with personnel.

He had some nervy moments after the break and some questionable decisions were made on his part, during a busy evening’s work. It was by no means a perfect display, having been dispossessed on six occasions. Perhaps it’s also telling that he was fouled six times too. With four shots, two completed key passes and dribbles, he was constantly looking to get on the ball. Too much. 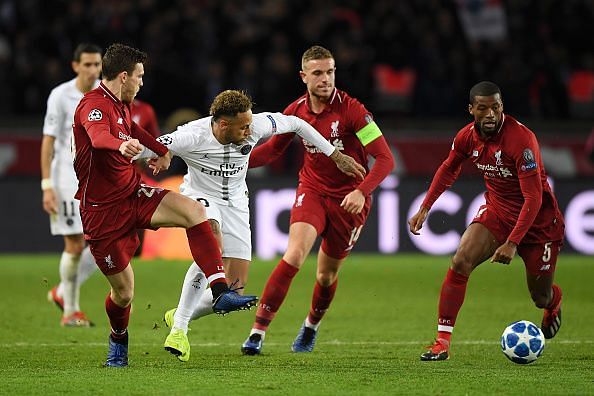 Sometimes he must display more restraint, calm down and understand that it’s not all about him. There were times where Mbappe could have burst forward on a galloping run but instead patiently waited for Neymar to make himself a passing option. It’s clearly something they had agreed in training beforehand. The same goes for Cavani, who was fairly isolated and quite muted in the final third, despite making some intelligent runs and providing another headache for Liverpool defenders to mark.

Whether that be his weight of pass, making the right decision altogether or a seeming desire to go it alone and run into traffic, Neymar remains a frustrating player to watch. There’s a player with his undeniable talent and ability to shine – but for PSG to achieve more success in this competition, he must be more unselfish and equally decisive in the knockout rounds. This display, as good as he was, proved a prime example.