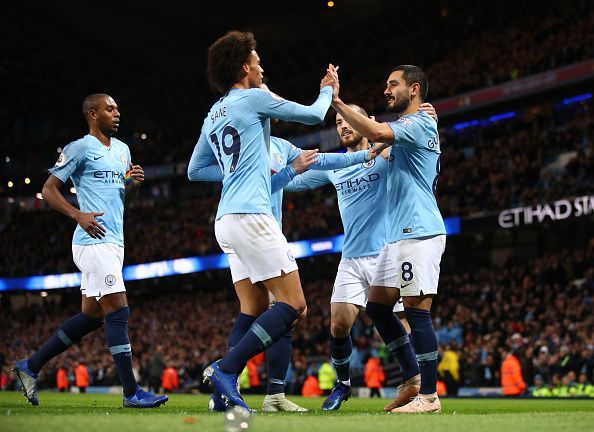 Manchester City extended their impressive unbeaten run in the Premier League to a whopping 20 matches after a 3-1 home win over AFC Bournemouth on Saturday afternoon. Which players struggled, while others excelled at the Ethiad?

Goals from Bernardo Silva, Raheem Sterling and Ilkay Gundogan proved enough for Pep Guardiola’s men to extend their lead atop the table to six points – ahead of three derby fixtures which involve title rivals Liverpool and Chelsea on Sunday.

Callum Wilson’s headed finish – his seventh goal of the league campaign – provided a scare for the hosts on the stroke of half-time, particularly as it was the first they had conceded in open play from a non-defender this season.

However, the Citizens battled with more intent and made their visitors pay the price with some well-worked goals after the break, sealing an important victory against Eddie Howe’s men, who have now lost four consecutive matches.

With all of that in mind, here’s a look at Five hits and Flops from the Ethiad Stadium: 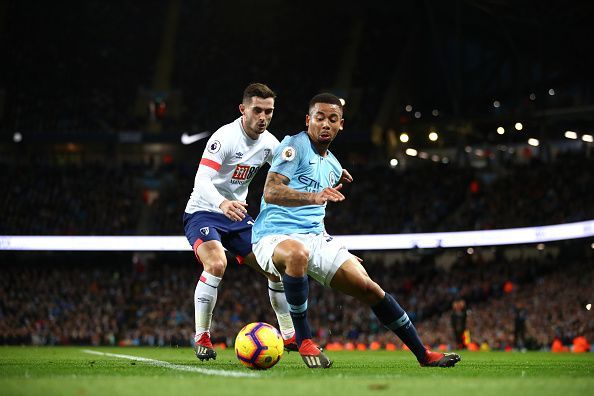 Cook, despite his undeniable ability, was often a bystander out of possession and struggled

For someone who harbours genuine ambitions of breaking into Gareth Southgate’s future England plans, this was a disappointing display from a highly-rated midfielder.

At 21-years-old, there’s still plenty of scope for him to continue improving with time and experience – but performing in matches like these against the league’s best sides is a sure-fire way to establish yourself to a wider audience.

He didn’t – which wasn’t entirely his fault – but given just how good he can be, this was frustrating to watch. He seemed like a pedestrian for sustained periods in the match, against a City side who were eager to control the game’s tempo and dominate in midfield. Ilkay Gundogan, Fernandinho and Bernardo Silva were all too comfortable with possession and his match stats really spoke for themselves.

79.2% pass accuracy, 33 touches, dispossessed on three occasions and made four defensive actions in 90 minutes against the league’s best side. Not good enough and he’s yet to justify why he should be aiming higher. 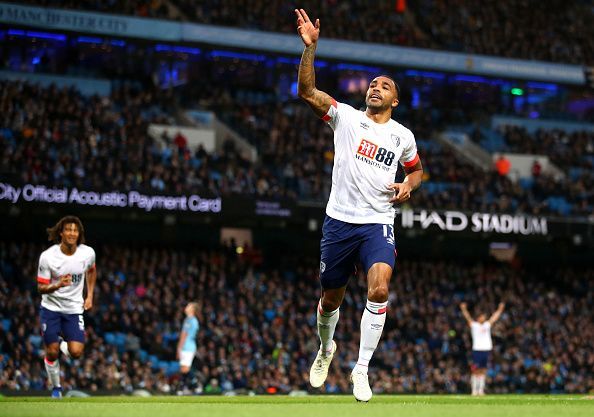 Despite a disappointing showing last weekend against Arsenal, Callum Wilson returned to the scoresheet on this occasion. With a bit of luck and better service into his path, the 26-year-old might have helped to salvage an encouraging result from Manchester.

As usual, he worked tirelessly out of possession and you could feel for him in the second-half, as he was visibly trying to get his teammates to continue pressing City’s backline. Given the hosts’ dominance on-the-ball, it was clear to see Bournemouth players tiring as time wore on and they began sitting deeper.

The visitors had just 27% possession at the full-time whistle, which typified their struggles.

However, Wilson was not fazed. He worked well to trouble both Aymeric Laporte and Nicolas Otamendi in particular – leaping above the Argentine to head home and score his seventh league goal of the campaign.

On another day, he probably would’ve earned a penalty after Ederson caught him during a goalmouth scramble late on. With better service, who knows what might have happened? 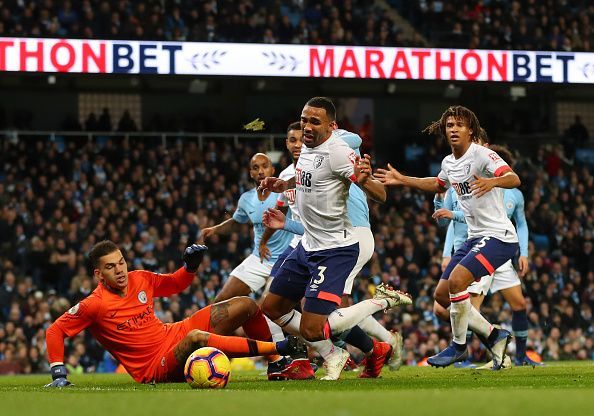 Having to feed off scraps and half-chances for the most part, it must have been annoying but expected against a side of City’s ability. 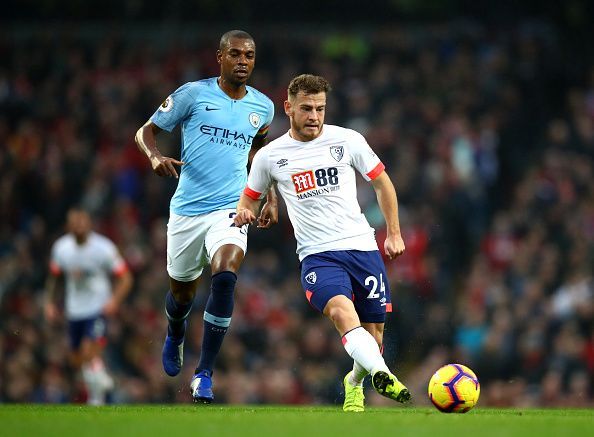 I’m not sure whether it’s just poor form, he’s suffering from fatigue or what, but Ryan Fraser disappointed in a big way here.

To his credit, he created two key passes – more than any of his teammates can say, but frankly didn’t do much other than that. His passing accuracy was very poor (68%), struggled to get on the ball in dangerous areas often and the more adventurous passes were largely unsuccessful too.

He didn’t stretch the hosts’ backline as we’ve come to typically expect from the 24-year-old, which was something that Josh King in particular looked to do wherever possible – despite struggling with his final ball. It was made all the more frustrating knowing that Junior Stanislas and David Brooks, in particular, were both patiently waiting for their opportunity from the bench.

He hasn’t been at his blistering best for a few games now at club level and perhaps it’s harsh to judge him with such scrutiny because against better opposition, players are able to adapt and show awareness to his strengths and weaknesses. Here though, he was nullified effectively. Perhaps, ahead of the busy Christmas schedule, a rest is in order? 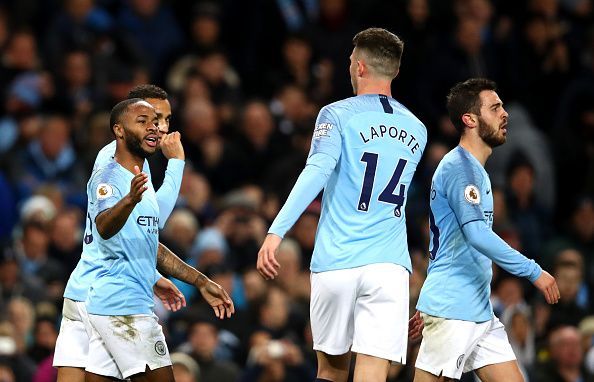 It was another impressive display from Raheem Sterling, who is now tied for the most Premier League goals this season – with Arsenal’s Pierre-Emerick Aubameyang and teammate Sergio Aguero (hamstring), rested on this occasion.

When Wilson levelled the scoring just before the break at 1-1, you were trying to see who would take the game by the scruff of its neck. City supporters were frustrated, the atmosphere flat and gradually starting to get impatient, worrying that this might not be their day – especially after a 2-2 away draw wih Lyon in midweek.

With no Kevin de Bruyne, David Silva on the bench and Aguero not involved altogether, Sterling stepped up to the plate. Working hard to create chances aplenty down the right-hand side, he was continuously running at and dribbling towards the final third with intent.

Unfortunate to hit the post after a great individual run, weaving his way beyond four opposition challenges before seeing his deflected strike cannon back off Asmir Begovic’s near post. It only proved to be a sign of things to come though, providing him the extra energy needed to prompt a proactive response and maintain his attacking style in the hosts’ attempts to restore their slender advantage. 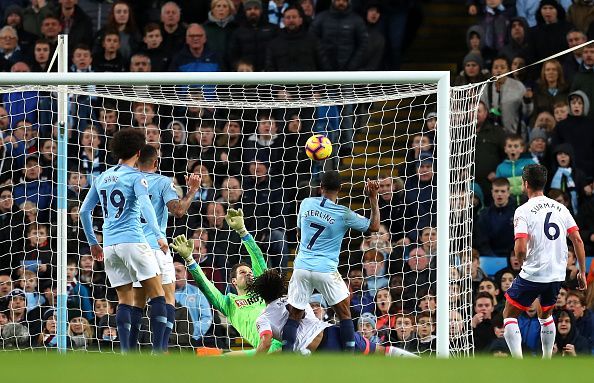 He eventually got on the scoresheet, firing into the roof of the net from close-range after Danilo had a powerful effort parried into his path by Begovic. It wasn’t a pretty goal, but it was just as important. He reacted quickest and in doing so, broke a goalscoring record – becoming the first player in Premier League history to score in their first six games against one single opponent.

He crucially maintained his attacking intensity, to ensure the visitors wouldn’t get back into the game either while enjoying some good one-on-one battles with a returning Tyrone Mings, who didn’t shy away from the challenge either and did well too. 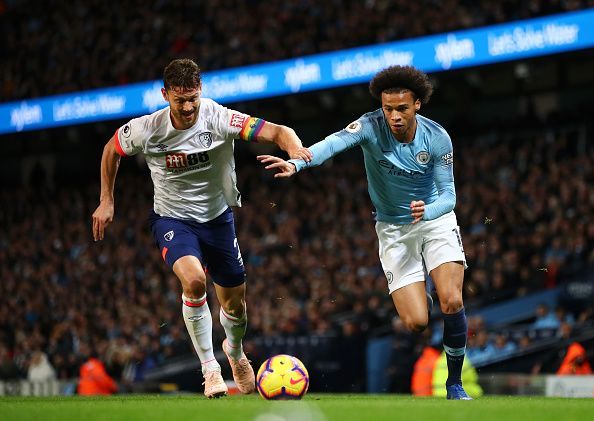 Sane was a constant menace, displaying his unselfish side once more while showing his class too

Man of the Match, again!

His struggles with consistency to start the new campaign have been well-documented, but on this occasion again, he just displayed his class in abundance.

Subtle with his movement in-and-around the box, he knew exactly when to shoot, when to pass, when to drop his shoulder and take Bournemouth players on. The mature decision-making in the final third is refreshing to see, as he persists in establishing himself as a match-winner for City.

Patient, persistent, composed in possession (85.7% pass accuracy), he gave Simon Francis a real nightmare to contend with because you just couldn’t predict his next move. Can count himself unfortunate to only get one assist on the afternoon too – having set up both Sterling and Bernardo Silva, neither were able to finish their chances that the German orchestrated.

It was far from an easy three points against a determined Bournemouth side, who set up with a five-man backline and did their utmost to frustrate. They did exactly that, but Sane proved instrumental as the defending champions recorded another morale-boosting win.