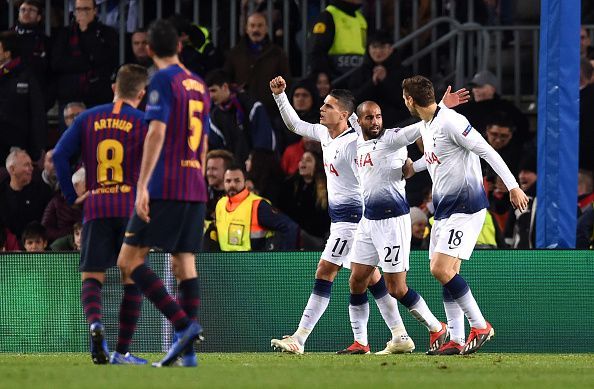 Tottenham qualified for the Champions League knockout rounds as group runners-up during an action-packed affair at the Nou Camp, where their 1-1 draw with Barcelona proved enough to progress as Inter Milan failed to beat PSV in the group’s other fixture. Which players struggled here, while others impressed?

Tuesday’s hosts rested a number of key players with their place in the last-16 already confirmed as group winners prior to kick-off. Marc-Andre ter Stegen, Gerard Pique, Jordi Alba, Sergio Busquets and Lionel Messi were all on the substitutes’ bench as Ernesto Valverde rung the changes from their 4-0 derby win at Espanyol on Saturday.

Ousmane Dembele broke the deadlock after seven minutes, capitalising on a Kyle Walker-Peters error to slot home with aplomb. Despite creating chances aplenty, Tottenham only found their equaliser with five minutes left to play through substitute Lucas Moura – who previously had a header saved from point-blank range.

Heung Min-Son, Christian Eriksen and Harry Kane all had promising chances to score, squandered. But it was Kane’s delivery which fell into the Brazilian’s path – after spurning his previous chance, he couldn’t miss again. 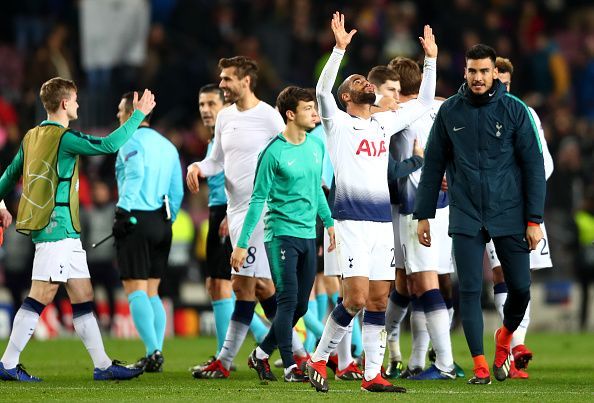 Without further ado, here’s an extended look at the five best and worst performers from a memorable night in Barcelona: 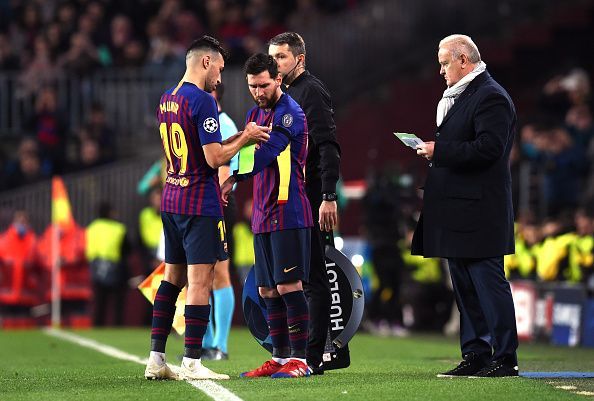 Regularly cut a frustrated figure in attack alone, although Valverde utilised him as part of a three-pronged attack alongside Philippe Coutinho and Dembélé.

He rarely got on the ball, evidenced by a game-low 19 touches – and it seemed his teammates were more confident in driving forward alone with the ball than actually passing to him.

Perhaps because he was up against the imposing Alderweireld-Vertonghen pairing in defence, they were unconvinced he’d be able to do enough to beat them in one-on-one duels?

Although he still created two key passes, he was caught offside on three separate occasions – another unwanted game-high – and dispossessed twice. Frustrating to see from a highly-rated forward whose stock has somewhat fallen in recent seasons. 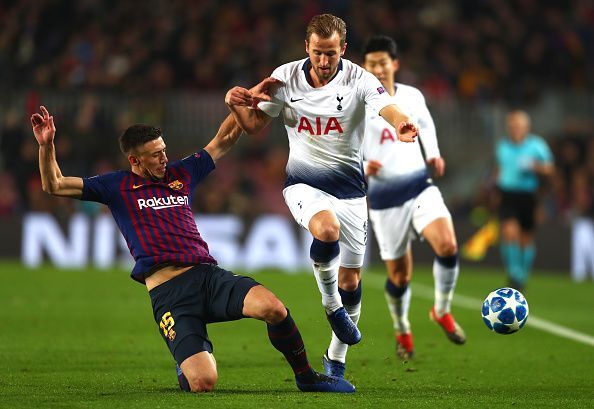 Kane was forced into regular duels with Lenglet and despite a frustrating display, did well to create chances

It was a difficult evening’s work for Spurs’ talisman – who was effectively dealt with by Barcelona’s backline throughout. As a result, he was instead forced to drop deeper and link-up play to create chances.

Kane had a whopping six shots registered and was wasteful, but embraced a more creative role to set up his teammates in space, who were either running on the overlap or alongside him.

He provided the assist for Lucas’ equaliser late on and should have at least had another, after an excellent pass into the overlapping Danny Rose was fired wildly over the crossbar by the fullback.

Definitely should have scored too, but it was nonetheless an admirable display from the 25-year-old. Kane had a game-high four key passes and 87.5% pass accuracy, which is encouraging to see. He kept going despite missing chances and eventually made the hosts pay. 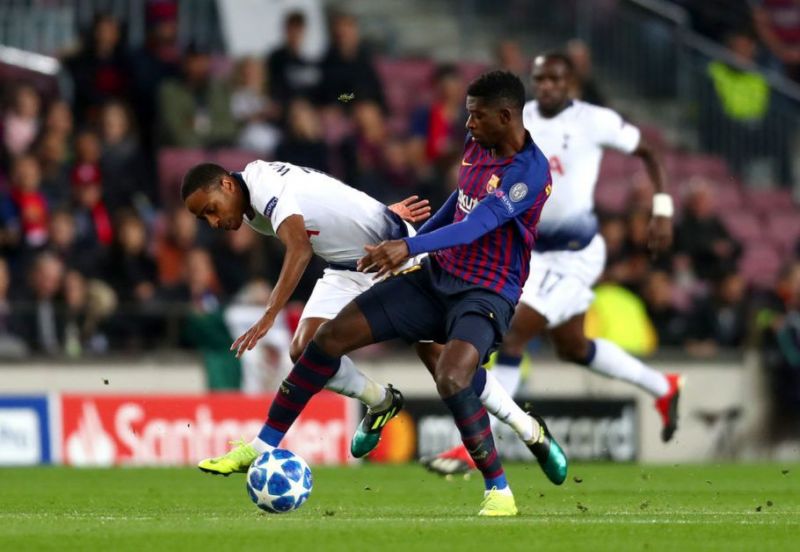 Baptism of fire: Walker-Peters lost possession and was outmuscled in the build-up to Dembele’s goal

It was a memorable evening for the 21-year-old making his Champions League debut here, but not for all the right reasons. He was caught in possession by Dembele after Sissoko’s header back toward him didn’t provide enough time to control and pass into space under pressure.

Dembele surged forward on a blistering counter-attacking run and made no mistake to open the scoring beyond compatriot Hugo Lloris – all of which happened within moments. It would’ve been easy for Kyle’s head to drop after that mistake and struggle to recover, but to his credit, he did the opposite.

It was his sliding block which thwarted Coutinho early in the second-half and interestingly enough, despite being dispossessed on five occasions, he had the team’s best pass accuracy (93.9%) on the night.

Replaced by Erik Lamela on the hour mark as Pochettino knew he needed more attacking impetus, this was was a baptism of fire that will ultimately stand him in good stead for the future. 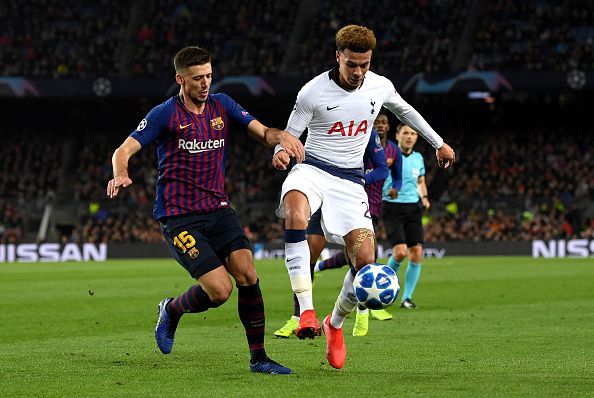 On any other day, Clément would’ve earned my Man of the Match award – he was that good. The 23-year-old, who continues to develop alongside various defensive partners under Valverde, excelled here and needed to – playing next to an experienced Thomas Vermaelen, who had only started three games (all competitions) this season before kick-off.

In the absence of both Pique and Samuel Umtiti, he balanced his role to mirror the pair’s strengths – excellent positioning, tackling and recovery challenges where possible.

Engrossed in an ongoing battle with Harry Kane, he regularly came out on top. When he didn’t, like after Sissoko’s searching through ball set the 25-year-old through on-goal, the Frenchman did enough to put him off and frustrate his regular striking motions.

His match statistics speak volumes – game-high tackles (7) and interceptions (4), three clearances, one blocked shot and no fouls committed! What more could you want? 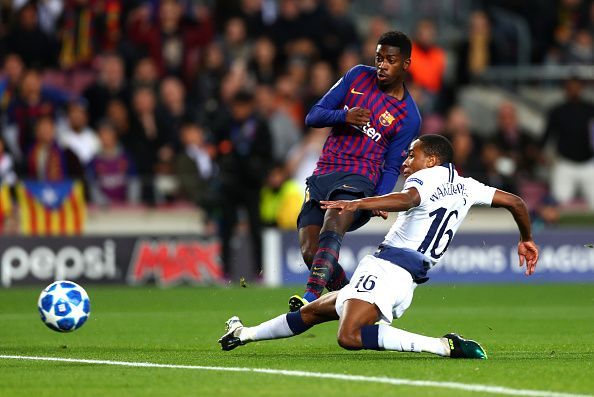 An honourable mention to Philippe Coutinho here, who would’ve probably made the top hits on this occasion but flickered in-and-out of the action too frequently to earn a spot.

However, his younger attacking counterpart Dembele delivered another impressive display in a game where Barcelona were searching for that spark – a moment of individual brilliance – that would get the hosts off their feet.

With Messi watching on from the substitutes’ bench for the most part, he would’ve been impressed with the 21-year-old’s showing. His goal was a great piece of anticipation, showcasing the trademark blistering acceleration and composure in front of goal that the Blaugrana expect more frequently from the Frenchman.

He looked to create chances where possible (two key passes, three completed dribbles) and stretched Spurs’ backline with his intelligent movement down the right-hand side.

He was fouled on three occasions and dispossessed four times – probably held onto the ball too often at times, where he could’ve done more to get Munir involved. Gradually faded after Messi’s arrival and was replaced by Denis Suárez with a quarter-of-an-hour remaining, but still the type of creative display which justifies why so much is expected of him.