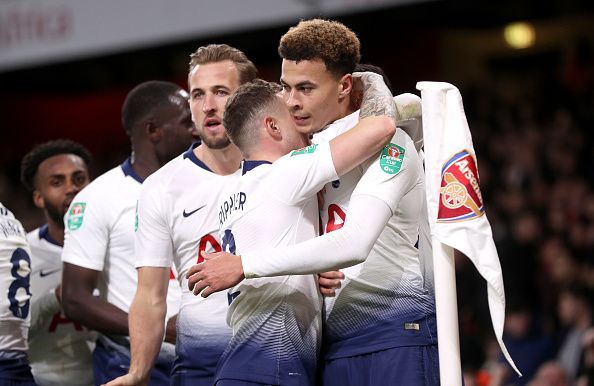 Tottenham exacted revenge on London rivals Arsenal and sealed their Carabao Cup semi-final berth in the process, with a 2-0 away win at the Emirates. Which players struggled while others impressed in this latest north London derby?

Tottenham exacted revenge with a 2-0 Carabao Cup win over north London rivals Arsenal at the Emirates, securing their passage into the competition’s semi-final stage.

Goals from Heung-Min Son and Dele Alli either side of half-time saw Mauricio Pochettino’s men enjoy their second successive victory in four days, while there’s trouble in paradise for Unai Emery’s Gunners.

Tottenham’s second-choice goalkeeper Paulo Gazzaniga made two important saves to keep the match finely poised – one from Henrikh Mkhitaryan and another after Aaron Ramsey’s goalbound effort. Substitute Alexandre Lacazette hit the post just minutes after being introduced, while the hosts had fashioned promising opportunities, with ultimately no reward.

After a well-documented 22-match unbeaten streak came to a surprising end against Southampton this past weekend, they’ve now lost two on the bounce going into the most pivotal part of the campaign – a tricky winter period. Spurs have drawn Chelsea in the competition’s two-legged semi-final, which will be played next month.

With all of that in mind, here’s an extended look at five players who impressed and otherwise struggled during a telling cup tie: 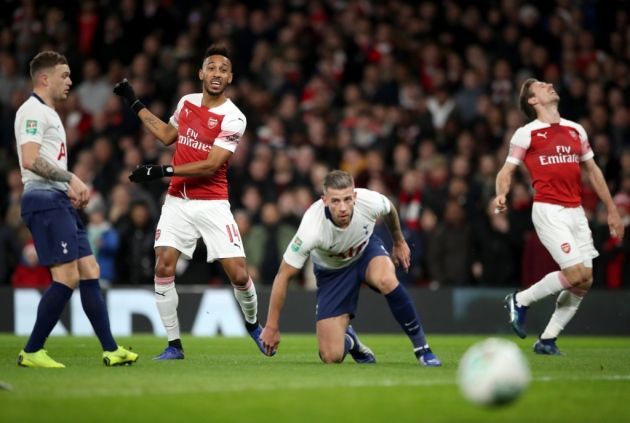 Aubameyang struggled, yet again, to impose much impact on the match

Perhaps harsh, but nonetheless justified. Aubameyang – who struggled against Southampton – didn’t perform to the best of his abilities against tougher opposition on this occasion either.

Just like on Sunday, Emery’s men looked more threatening once Lacazette was introduced. He’s a direct goalscoring threat while Aubameyang tends to make intelligent runs down the channels and relies upon service to create those chances. He had a few brief encouraging moments, either with give-and-go exchanges or a burst of purpose to create a half-chance, but to no avail.

Only Lucas Moura (50%) had a poorer pass accuracy percentage than Aubameyang’s 57.1%, which typifies his struggles. He’d barely had a touch in the first-half, yet still managed to be offside twice and get dispossessed.

Two key passes, one dribble completed and two shots – neither of which were on target – it was definitely another frustrating watch from a forward who must step-up his overall game, because it’s increasingly important in the final third. 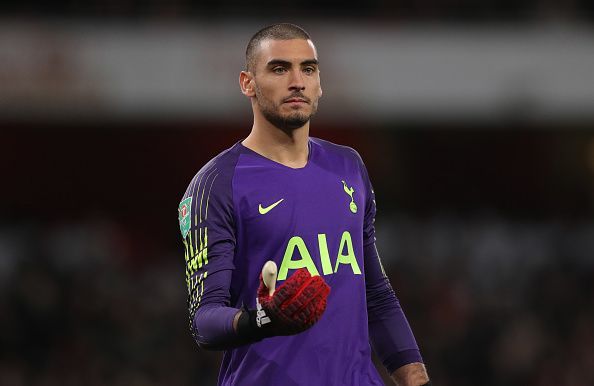 On another day, Gazzaniga would’ve been higher up on this list. Making only his sixth appearance of the season, the 26-year-old Argentine was unfazed and did remarkably well to deny Arsenal from scoring before half-time. He made two important saves, which ultimately could’ve been game-changing had they gone in.

The first was from Henrikh Mkhitaryan, who really should have done better. One-on-one with only the ‘keeper to beat, he tried to give him the eyes and deceive him but instead, ended up shooting relatively close to Gazzaniga’s starting position.

He still had to guess right and make a diving save, but after fashioning such an opportunity early on, the wind was swiftly taken from Arsenal’s sails.

Then, Aaron Ramsey had a goalbound effort saved onto the post on the stroke of half-time. Gazzaniga’s outstretched right hand was enough to tip the shot onto the woodwork, bounce off and clear to safety. 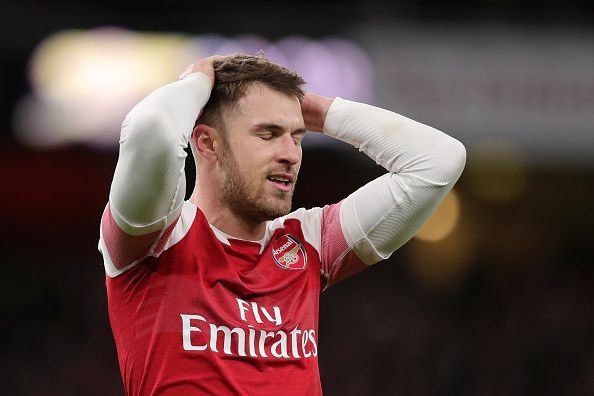 Tottenham were 1-0 up at this point, but could’ve easily been 2-1 down going into the break. If not for his interventions, things might have panned out differently during this quarter-final.

After a performance like that, Paulo continues to prove his worth to both teammates and Pochettino. Since his arrival from Southampton last year, he’s been quietly working to develop and is showing why they signed him – usurping Michel Vorm as the club’s new second-choice between the posts. 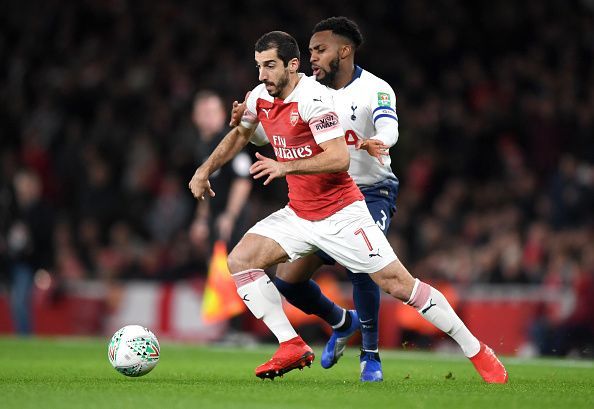 Mkhitaryan flattered to deceive, as usual – and squandered a big chance

As I said in the previous slide, Gazzaniga’s save from Mkhitaryan was a good one – but the Armenian really should have scored. One-on-one with only the goalkeeper to beat, inside the box, there were several things he could have chosen to do.

Curl it top corner, finesse towards the bottom, go around him, the list goes on. Instead he shot close enough to give him a chance at saving it and truthfully, that typified his evening’s work. Frustrating.

Every time he created a chance or found himself in a promising position, it was almost as though he couldn’t believe his luck. His decision-making was erratic and he failed to take advantage of those opportunities to create more goalscoring chances – as Arsenal enjoyed spells where they could’ve scored themselves.

71.4% passing accuracy was among the worst on the team, he was dispossessed on five separate occasions and failed to create a key pass or complete a dribble before being replaced at half-time. Perhaps this is the performance that convinces Emery to drop him, as he’s been underperforming for a while now. 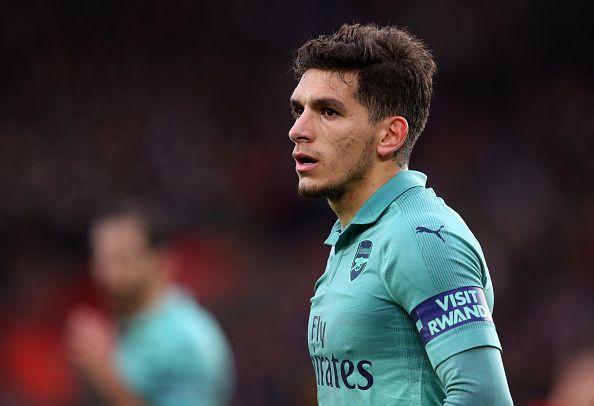 In someone’s post-match analysis, they questioned where Torreira hides magnets which see the ball almost always gravitate towards him.

While that’s a light-hearted assessment of the Uruguayan’s playing style, it couldn’t be truer on this occasion – where he appeared to constantly win the ball back in midfield areas and was one of very few Arsenal players actively impressing throughout here.

He created a key pass, had 89.4% pass accuracy, made a game-high seven tackles and completed two interceptions too. Unfazed by the Sissoko-Winks pivot in midfield, he outshone them both and did his utmost to keep Christian Eriksen isolated too.

It was annoying to see him not partnered alongside Granit Xhaka – playing again as a left-sided centre-back – because, despite Matteo Guendouzi’s energy and guile, the Swiss international is a much better controller in that role. Hopefully, we can see the pair play alongside one another again soon, for Arsenal’s sake in midfield. 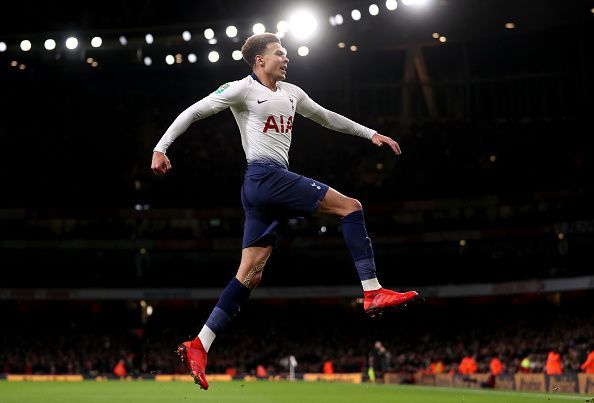 Matchwinner! This was one of those games where you have to observe from afar and truly appreciate just how good Dele Alli is.

He’s still only 22-years-old and with quality comes expectation that he performs to this standard more often, which is easier said than done. on this occasion, he stepped up to the plate and excelled against a vulnerable Gunners backline.

It was his inch-perfect through ball into Son’s path which set him on-goal with a golden opportunity to break the deadlock. He made no mistake. His second-half finish was just as good, staying onside as Arsenal’s backline parted, latching onto Harry Kane’s lofted ball before deftly flicking his effort over an onrushing Petr Cech, wheeling away after doubling Spurs’ lead. 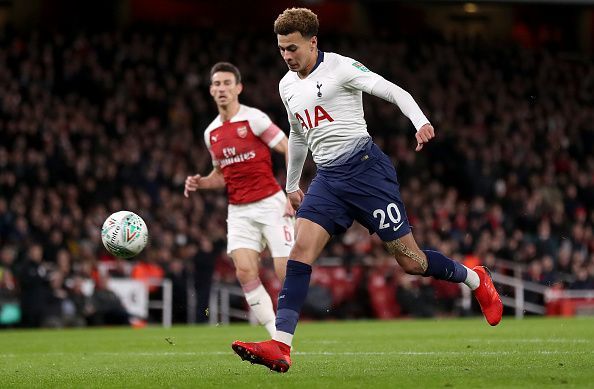 Two key passes, four tackles, one interception, one goal and assist. Yet, there is still room for improvement. His passing accuracy was a lowly 70.8%, which is unlike him.

He was dispossessed on eight occasions, a statistic slightly skewed after some not-so-subtle attempts to waste time late on. However, there’s much more to see from him and it’s increasingly clear that consistency is his next challenge.