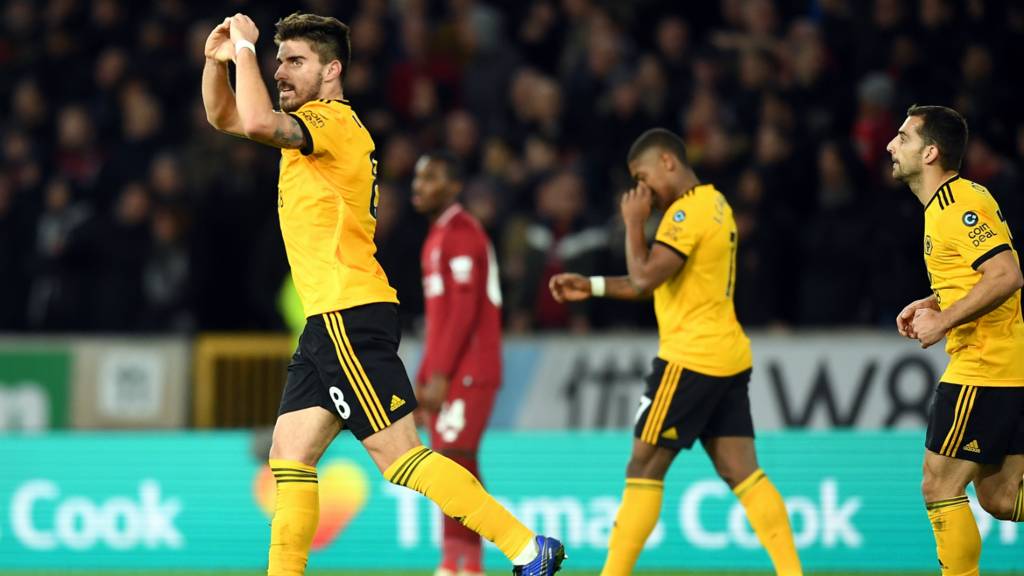 Goals from Raul Jimenez and Ruben Neves proved enough for Wolves to secure passage into the FA Cup fourth-round, at the expense of Premier League leaders Liverpool – who have now suffered two defeats in the space of a few days.

Liverpool started slowly and were duly punished after 38 minutes, when Jimenez showed composure before finishing well from close-range to break the deadlock.

Divock Origi, criticised for a lacklustre first-half display, equalised with aplomb just six minutes after the restart, having weaved his way beyond two challenges and striking ferociously beyond John Ruddy. It was the visitors’ first shot on target and although the Belgian has featured sparingly for Liverpool this term, this was a type of defiant finish from someone eager for more minutes.

Shaqiri celebrates with Origi after the latter’s emphatic finish levelled the scoring during a frustrating defeat. (Picture source: AFP/Getty Images)

Ruben Neves restored the hosts’ lead with a long-range effort from 30 yards, picking his spot in the bottom corner beyond Simon Mignolet’s futile dive. It was a special strike but one we’re used to seeing from the Portuguese midfielder – a trademark finish from the 21-year-old, who continues to attract interest across Europe.

The Reds made nine changes to the side who lost 2-1 against Manchester City on Thursday evening, with only James Milner and Dejan Lovren keeping their places in the starting eleven.

Lovren, heavily criticised for a poor display against Pep Guardiola’s men, had a hamstring injury and was forced to be replaced after just six minutes. In his place came 16-year-old Ki-Jana Hoever, who made history to become the youngest player ever to feature for the club in the FA Cup – as well as their third youngest ever.

Klopp gives Hoever his last-minute instructions before being introduced into the fray. (Picture source: Action Images via Reuters)

He was one of their better players during a disappointing display at Molineux – though it was clear Klopp utilised a weakened side with other more important commitments to consider.

Roberto Firmino, Mohamed Salah and Sadio Mané all sat patiently watching on from the substitutes’ bench, with Daniel Sturridge and Divock Origi leading the line in a traditional 4-4-2 formation.

Salah and Firmino were both second-half substitutes late on, but couldn’t prevent Liverpool from crashing out of the Cup. (Picture source: AFP/Getty Images)

Jimenez almost grabbed another midway through the second-half, having pounced on Hoever’s mistake in possession yards away from his own goal. He was shrugged off-the-ball but luckily for him, the Mexican forward could only send the eventual effort into the side netting from close-range.

It highlighted the fact that despite the 16-year-old’s composure with the ball at his feet, he appeared too lax at times and Wolves attackers were keen to pounce on that given his inexperience.

Xherdan Shaqiri forced a fantastic diving save from Ruddy minutes later down the other end, from a well-struck free-kick which seemed destined for the top corner. Ruddy, 32, made a fingertip stop to tip his effort onto the post – watching it cannon back off the upright and across the goal to safety.

Curtis Jones and Sturridge were replaced after 70 minutes in place of Firmino and Salah, as Klopp made his final alterations of the game. Hoever made an important defensive intervention to thwart Wolves’ counter-attack, as Jimenez’s delivery towards substitute Ivan Cavaleiro was cut out with the winger lurking alongside Ki-Jana.

You could tell the visitors’ intensity had progressively increased with two of their talismanic forwards winger introduced. Possession was more frenzied as Liverpool were patiently probing, looking to earn another equaliser.

Liverpool’s Naby Keita (centre) struggled with the simple things on a frustrating night for the league leaders (Picture source: PA)

This was Wolves’ first FA Cup home win in eight years and their second over Liverpool in three. They beat the Reds back in January 2017 at the same stage, at Anfield.

They will play either Shrewsbury or Stoke City in Round Four. The tie is set to commence over the weekend of the 25-28th January.