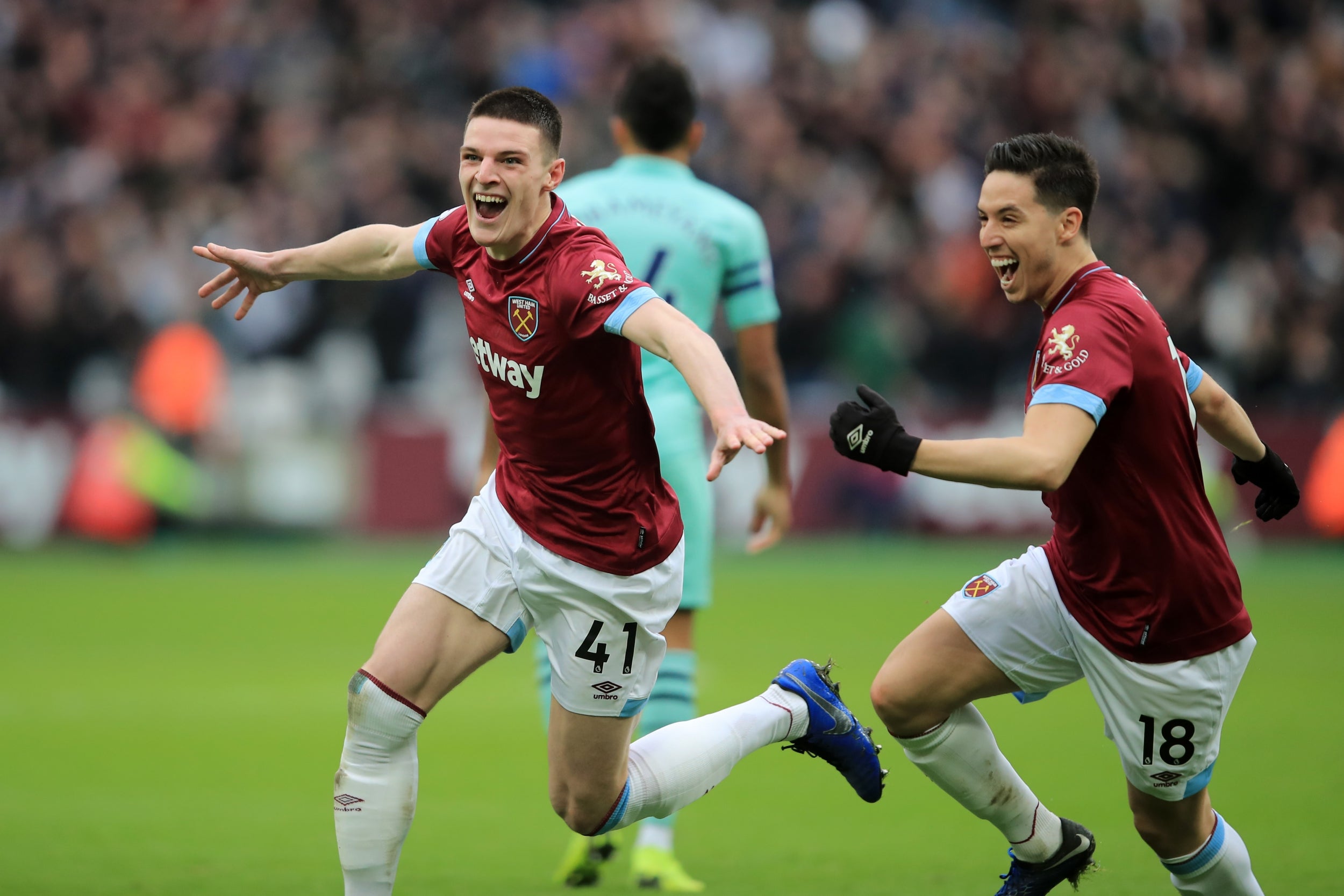 Declan Rice’s well-taken finish just minutes after half-time saw West Ham record their first home win over Arsenal in 13 years – prompting yet more questions for Unai Emery and his side to answer after another disappointing away performance, this time at the London Stadium.

On appearance 55 in what has been a promising start to his professional career, Rice scored the all-important winner against Arsenal and excelled in defensive midfield alongside the experienced figure of Mark Noble.

Having just headed wide, unmarked, on the stroke of half-time, he certainly made up for it as the Hammers benefited from a rapid second-half response.

Arsenal’s sloppy defending came to the fore once again as they failed to clear Felipe Anderson’s corner, allowing Samir Nasri to tee up the 19-year-old inside the box. His one-touch finish arrowed beyond a helpless Bernd Leno into the corner with aplomb, sending the London Stadium into sheer delirium. 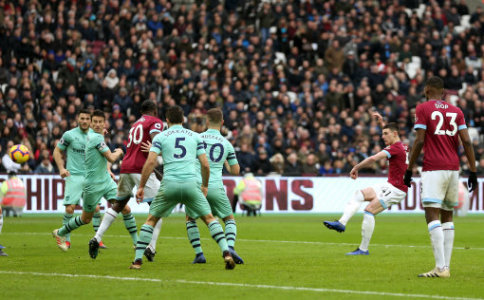 With a record 59,946 in attendance here, it was almost as though they knew a surprise was on the cards.

After news broke this week that Manchester City are tracking the teenager’s progress as an heir to Fernandinho’s throne, it was interesting to see how he’d deal with the added attention and scrutiny in a televised fixture.

He passed the test with flying colours from kick-off, composed in possession and equally effective without it – snuffing out attacks, forcing Arsenal players into deeper positions to try creating opportunities and intercepting loose balls with ease.

The visitors started brightly and combined well in creating a few half-chances, but ultimately this was to no avail.  Alexandre Lacazette looked sharp and hungry for goals – firing a long-distance strike which flashed narrowly wide, before forcing Lukasz Fabianski into an important stop from point-blank range.

West Ham were providing them far too much time and space in midfield to venture forward with, though they were not being punished for indulging their opponents. It was something that Arsenal were later made to rue.

Rice did well to thwart moves in their tracks whenever Arsenal approached him – they’d rather attack the spaces in-behind than dribble anywhere near him. Aaron Cresswell and Marko Arnautovic both squandered promising opportunities to create dangerous chances in quick succession, forcing Leno to claim their attempted deliveries from either side.

Then minutes later, Rice made a goal-saving interception to deny Lacazette after Sead Kolasinac’s deft cutback. The Gunners could sense they were finding more joy.

Not for long though. Samir Nasri’s mazy run into the area almost resulted in the deadlock being broken, after patient build-up play by the Frenchman allowed him to combine and weave his way to striking goalwards. The effort swerved wide of Leno’s near post but the 31-year-old’s intricate movements continued to pose a threat against his former employers.

Kolasinac and the returning Sokratis-Koscielny duo all had to make necessary defensive interventions as West Ham were suddenly enjoying an encouraging spell of their own before half-time.

Felipe Anderson fired a fierce effort narrowly wide after link-up play between Arnautovic and Nasri outside the box. Rice, unmarked in stoppage-time, headed wide and reacted angrily – knowing fully well just how good a goalscoring chance it was.

However, his frustrations soon turned into euphoria after the interval – a first-time strike that he’ll remember forever to mark his first Premier League goal. It was an excellent finish but one marred by a messy defensive effort from the visitors, who failed to clear their lines. 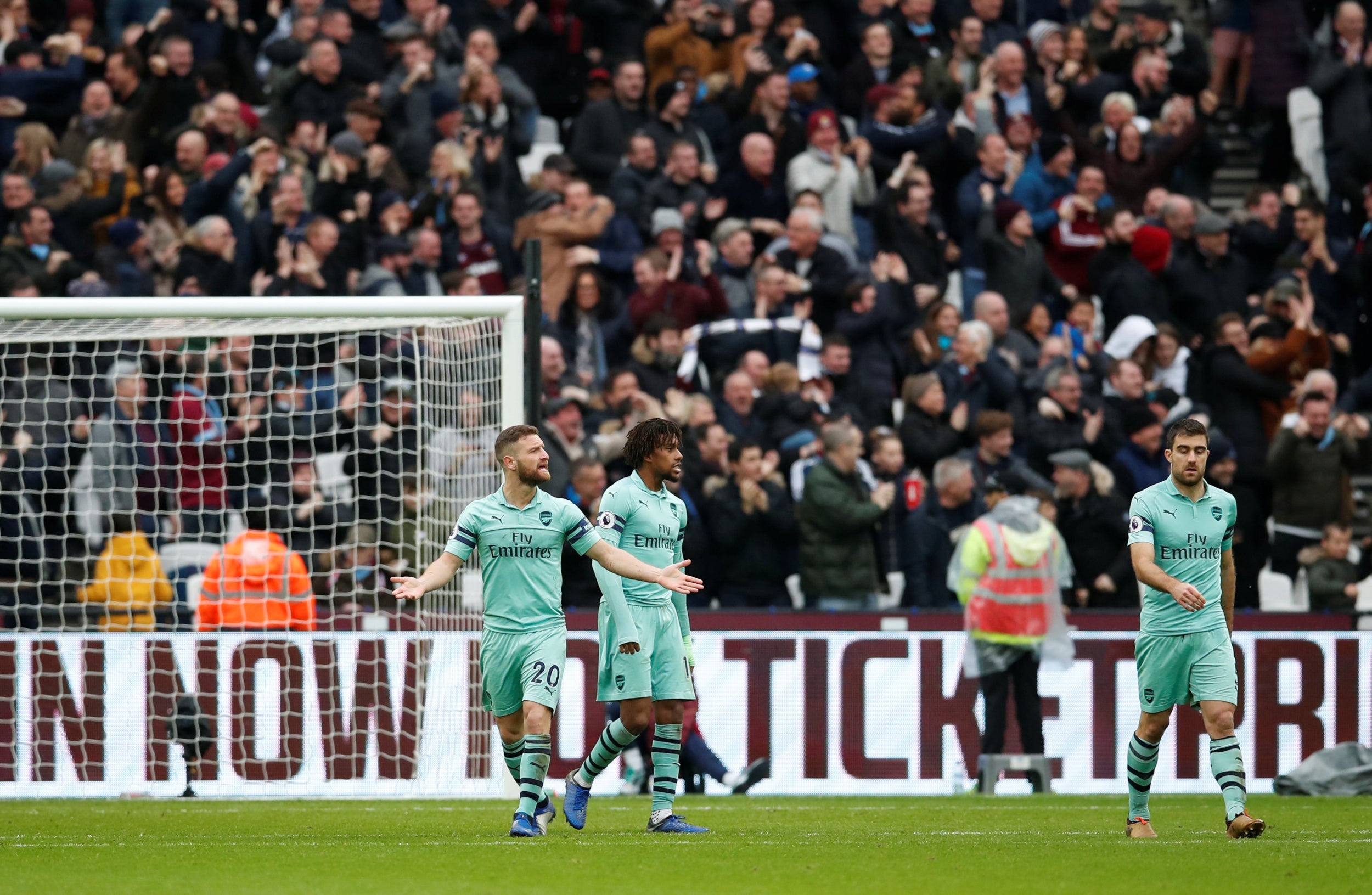 Unai Emery needed to make alterations and did so, bringing on Lucas Torreira and Aaron Ramsey to provide more energy in midfield. It could’ve had an instant impact too, though Pierre-Emerick Aubameyang squandered two chances in quick succession: a headed effort and one-on-one breakaway, leaving the game nicely poised. 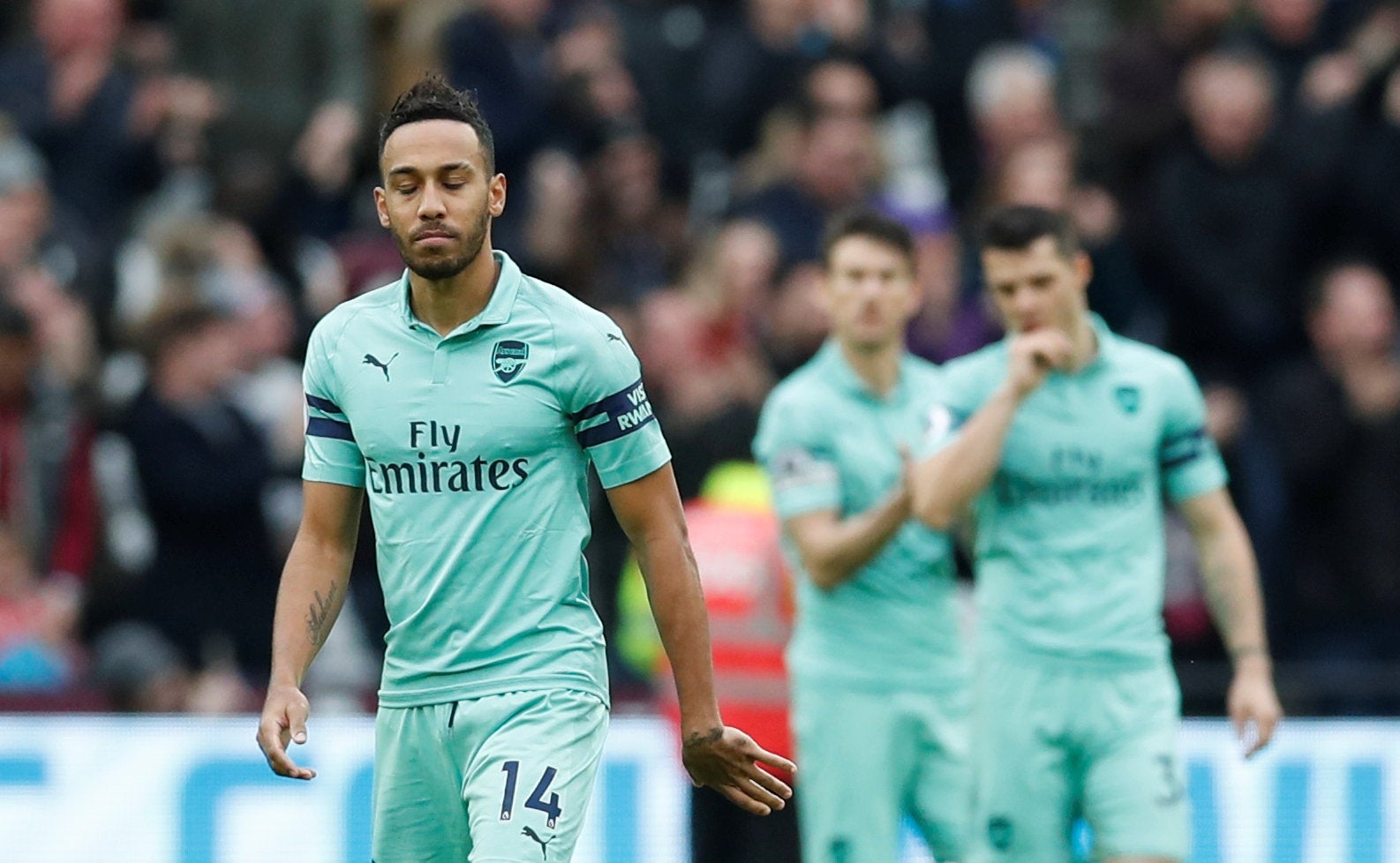 Ramsey’s deft flick into the path of Alex Iwobi should have been rewarded with an assist, though they could only watch as the Nigerian’s effort fizzed inches past Fabianski’s far post. He was beaten.

Ainsley Maitland-Niles, who equipped himself well, was replaced by Hector Bellerín in Arsenal’s final change for added attacking impetus – though their most creative spark, Mesut Özil, was nowhere to be seen.

Left out of the matchday squad by Emery altogether, it was painfully clear that they missed the German’s creativity in the final third and instead, we saw plenty of sloppy play with possession being relinquished far too easily at times.

Pellegrini made a double change with Robert Snodgrass and Andy Carroll being introduced for a tiring Nasri as well as talisman Arnautovic. Given recent speculation over the latter’s future, it was telling that he waved goodbye to the fans as they applauded him off – and swiftly walked down the tunnel at full-time, rather than celebrate with his teammates. 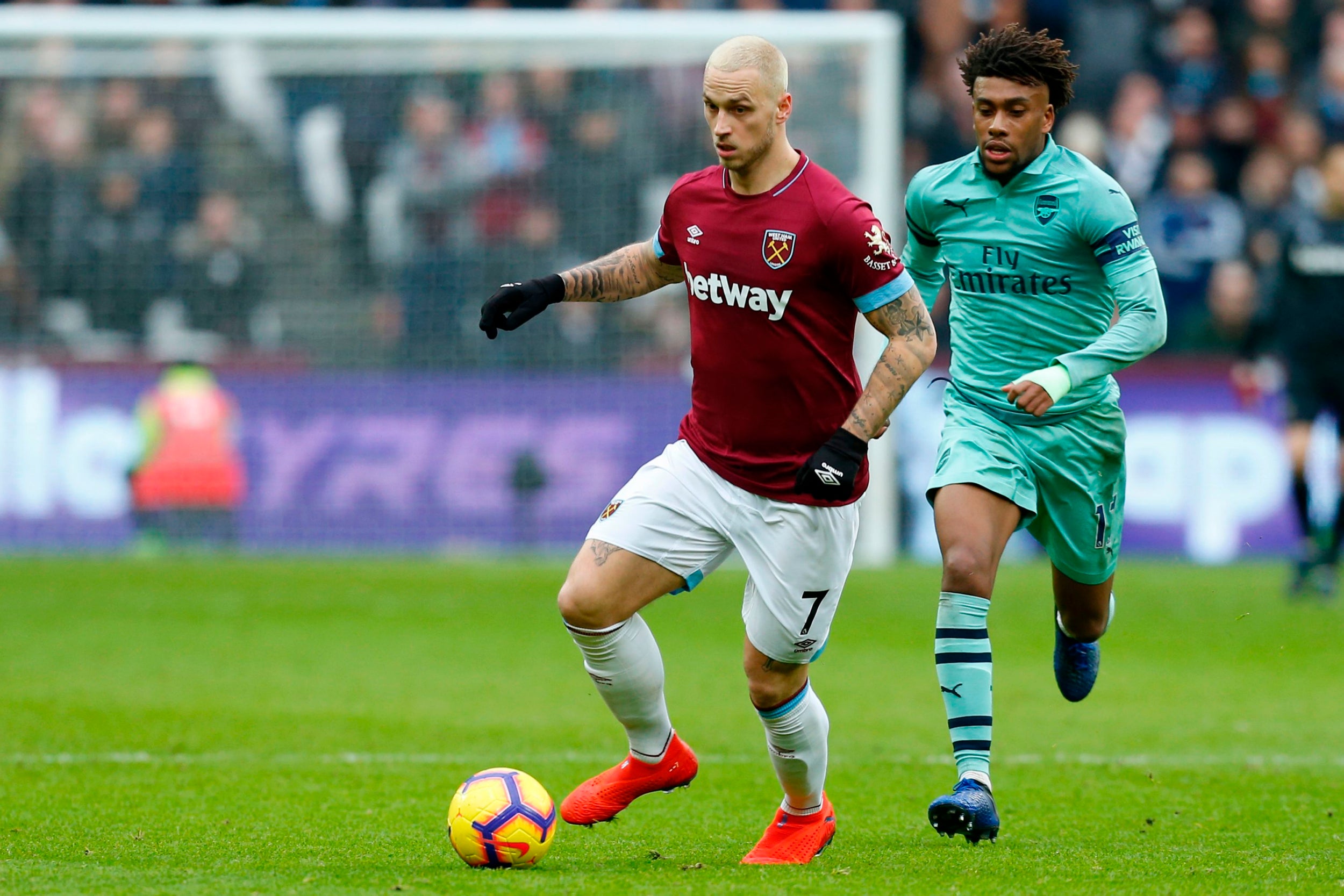 Final goodbye? Arnautovic was headed swiftly for the tunnel at full-time, after being replaced with 20 minutes to play. (Picture source: AFP / Getty Images)

Either way, the inclusion of fresh legs and energy saw the hosts persist with their pressing from the front. Infectious and something that was quickly appreciated by the supporters across the stadium, it spurred them on further as they held out for a memorable win – one they’ll be hoping stands them in good stead for 2019.

Manuel Pellegrini had only won one of 12 previous meetings with Arsenal, with five draws and six defeats going into this match. His post-match celebration spoke volumes: relief, pride and importantly, forward momentum. The Hammers move up into eighth place with this win, while Arsenal fail to apply pressure on Chelsea in the race for Champions League qualification.