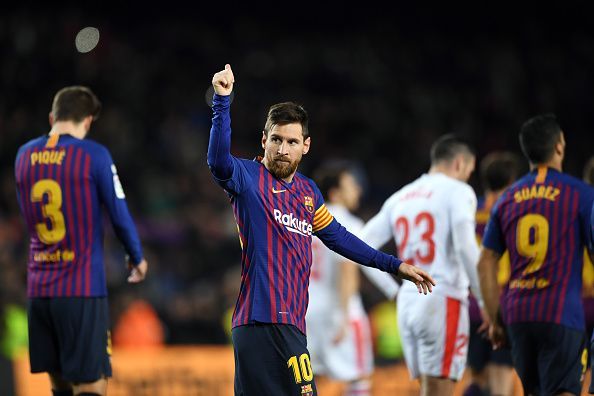 Barcelona remains five points clear at the top of LaLiga, after a comfortable 3-0 win over Eibar on Sunday evening. Luis Suárez‘s brace, as well as a landmark goal for Lionel Messi, ensured Ernesto Valverde’s side eased to victory over Eibar. Which players struggled while others impressed at the Nou Camp?

After their surprise 2-1 Copa del Rey defeat by Levante last Thursday, a full-strength Barcelona side was solid and eased to a routine victory as their quality proved too much for Eibar to handle.

With an eye on their second leg tie this coming week, Valverde looked to rest and preserve players where possible. It’s increasingly clear a treble is entirely possible this term, especially if Messi-Suarez are able to continue in top form. Here’s a look at five hits and flops from Barcelona’s 13th win of the campaign: 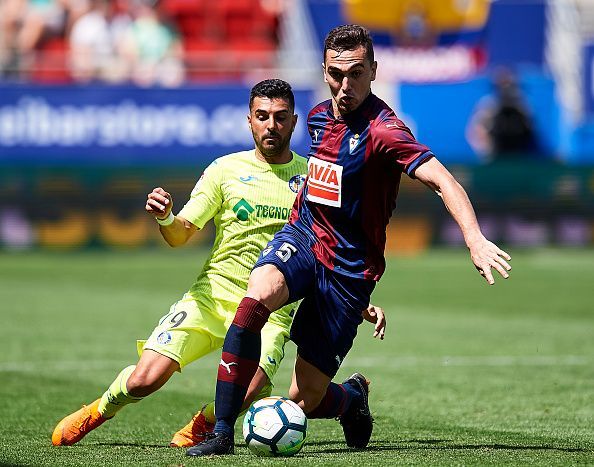 To Eibar’s credit, they were collectively good performers in a match where Barcelona’s quality proved too hot to handle.

However, there were still some players who struggled more than others and defensive-midfielder Gonzalo Escalante was one of those. Valverde’s 4-3-3 formation and the hosts’ counter-attacking threat meant this was not a game for wingers to flourish in.

Instead, sustained periods of play were through the middle third where Escalante was outperformed by his midfield partner Pape Diop while allowing the hosts had too much time and space to break quickly.

However, the Argentine only completed two tackles in 76 minutes before being replaced. Diop had five, an important clearance made and despite the scoreline, was regularly imposing his physical presence on the pitch. Escalante made no interceptions or other defensive contributions and with his teammates looking to attack late on, it was unsurprising that he was subbed. 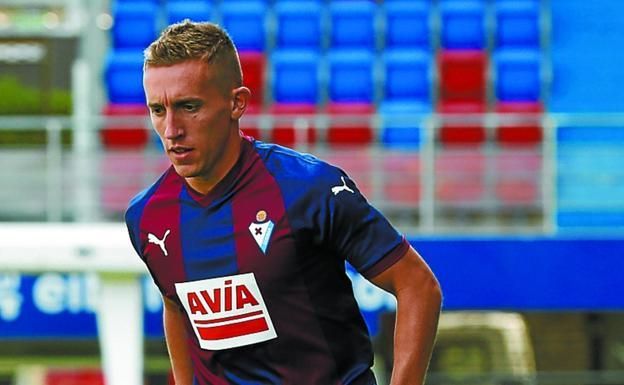 The Argentine winger, signed from Mainz last summer, was a troublesome impact sub for Barca to deal with

To emphasise Escalante’s disappointing display, his compatriot Pablo de Blasis is a perfect example here. The 30-year-old completed two tackles, created more threatening goalscoring opportunities and worked harder in 30 minutes after coming on as a substitute.

His introduction was greeted with an instant impact for the visitors, as he played intricate passes and continued to threaten in-and-around Barcelona’s box. Gerard Pique, who made a game-high 11 clearances, had to remain alert with De Blasis constantly lurking.

He forced Marc-Andre ter Stegen into a save after heading goalwards from Cote’s teasing delivery. Then, he turned provider minutes later for fellow substitute Kike Garcia with an excellent pass towards the Spaniard.

Unfortunately though, he was unable to apply the finishing touch as ter Stegen comfortably smothered the danger once more – but it was the type of performance from a player who is eager to start more regularly. 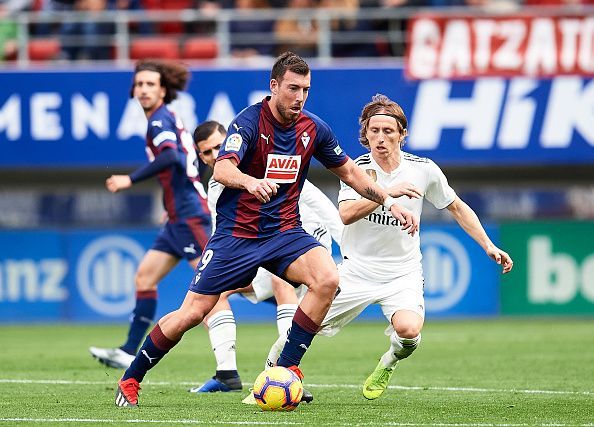 During a match where Eibar knew they needed to take their opportunities, they wilted in-front of goal. The 28-year-old Spaniard, leading the line, struggled in particular and found himself effectively isolated by Clement Lenglet and Pique.

He squandered two promising chances, one either side of half-time. Both were from close-range, headed efforts after being teed up by Cote’s inswinging deliveries, but, ter Stegen wasn’t tested as neither were on target – flashing wide of his post.

His passing was fairly accurate (88%) and he won a game-high seven aerial duels but was unable to do anything rewarding. 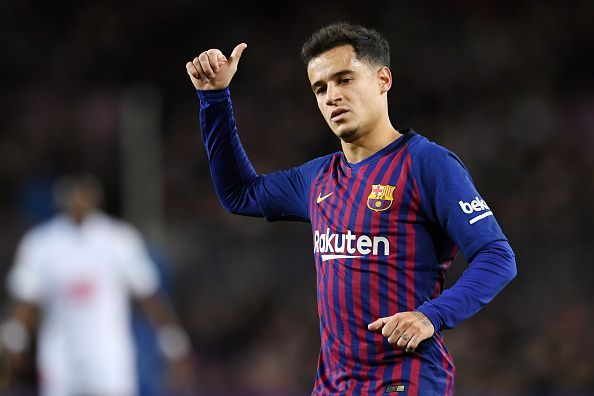 Coutinho excelled against Eibar, delivering the type of performance fans have come to expect

Philippe Coutinho has been unfairly criticised since his big-money move from Liverpool this time last season. On this occasion, he excelled. His combination play with both Suarez and Messi was a joy to watch, weaving beyond Eibar defenders inside out so quickly and playing beautiful one-touch football in transition.

It was his assist which created Suarez’s first of the evening. He had a penalty appeal waved away before half-time after tumbling to the turf – though referee Jesus Gil Manzano thought the Brazilian went down too easily, which was fair enough.

He combined well with Messi-Suarez during another blistering counter-attack to help set up Messi’s 400th LaLiga goal. Asier Riesgo made an important point-blank save to deny Coutinho from a tight angle. An impressive performance after replacing Ousmane Dembélé in the starting eleven, which proved a justified tactical decision. 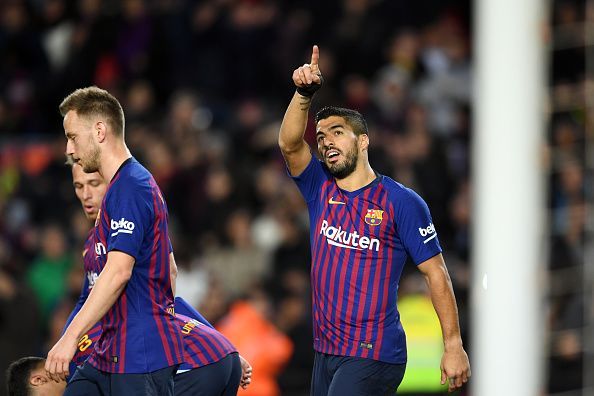 Suarez was fantastic, netting a brace and creating the assist for Messi during their 3-0 win

Coutinho excelled, but there was one performer better than him on an evening where Barcelona eased to victory – Luis Suárez. In an ongoing battle across Europe with many debating who the world’s best centre-forward is, it’s still Suarez.

He’ll turn 32 before this month is up, seemingly had a blip where he was struggling to score goals regularly and constantly criticised for being overweight.

His first goal was a tidy finish but to complete his brace was more difficult. He tucked away a well-placed shot from a seemingly impossible angle. Sergi Roberto took a quick throw-in while Eibar players were still backpedalling, with Suarez racing forward before making no mistake from a tight angle with style.

Unfazed when taking his chances, he harried defenders and forced mistakes to regain possession before unselfishly finding open teammates.

This is precisely what he did in the build-up for Messi’s goal. Lionel’s attempted pass was cut out, but Suarez accelerated and won the ball back before the Messi-Suarez-Coutinho trident broke quickly on the counter-attack. Within seconds, they were wheeling away to celebrate once more.

He could’ve had a hat-trick, if not for an important save by Riesgo. Messi squandered a chance after Suarez’s deft backheel flick in another display of their telepathic link-up play.

Unsurprising he was in some discomfort late on, having worked tirelessly throughout from minute one to full-time. Two dribbles, three key passes, four completed tackles, an interception, and clearance – an impressive evening’s work for the Uruguayan.