In a bout confirmed this afternoon, the unbeaten Terence Crawford is set to defend his WBO welterweight title against an unpredictable Amir Khan on April 20.

The encounter certainly represents a tough challenge for Amir Khan to face, having only boxed twice since his devastating knockout loss against Canelo Alvarez in May 2016.

A 39-second KO victory over Phil Lo Greco last April and an uninspiring points win against Samuel Vargas in September followed, though the 32-year-old isn’t getting any younger and knows that time is of the essence if he’s to recapture the dizzying heights of his earlier success. The venue for this contest will be in New York or Las Vegas, either at Madison Square Garden or the MGM Grand – still awaiting confirmation. It will make the first pay-per-view Top Rank stages with broadcaster ESPN, who have taken more of a vested interest in boxing and MMA in recent years.

Terence Crawford will put his undefeated streak on the line again, at 34-0, against an unpredictable adversary who must spring a positive surprise if he’s to prevail in this one.

TKO victories over Jeff Horn and José Benavidez Jr. last June and October mean he’ll go into this one with confidence that he can replicate the same winning fashion. Add to this the fact that Crawford’s previous 10 opponents had landed an average of seven punches per round, the signs seem ominous for the Bolton-born fighter.

Khan revealed that a fight with Kell Brook was on the cards before getting a late call in December. “When I got the phone call for this fight, I couldn’t say no to it because it’s got a world title on the line and an unbeaten fighter. Kell was there as well but for me, this is probably globally a bigger fight.”

“If I take it lightly, I’ll get hurt but I can win this fight. I feel comfortable at this weight [147lbs]. Styles make fights – he has a great style, is unorthodox but I think he’ll gel well against my style.”

Crawford meanwhile, stated: “I worked very hard to get to where I am right now, to be mentioned in those same categories with those great champions just tells you where my career is heading.”

“Amir is a great fighter – fast puncher and it’s a tough fight for us. I think my timing, smartness and ability to adjust will lead me to victory. We shall see.”

Will Khan’s bravery be rewarded this time around?

Just like with the Canelo bout, Khan will be naturally applauded for choosing the tougher option to face a champion and ignore the advances of compatriot Kell Brook – in a fight that has been years in the making.

Eddie Hearn, who signed Khan to a promotional deal, said: “It’s a tougher fight than Kell Brook, so you can’t accuse him of ducking. Unfortunately if you ask people watching at home who they would prefer to see him fight, of course it’s Kell. He’s trying to be a world champion again – in many aspects, you have to congratulate and admire him.”

Why Crawford is not to be taken lightly

What about Kell Brook now?

As for Kell, also 32-years-old, it’ll be interesting to see how he handles the news. He has been itching to agree a deal with Khan and this was the closest a potential fight has come, particularly after both had comeback victories on Sky box office. 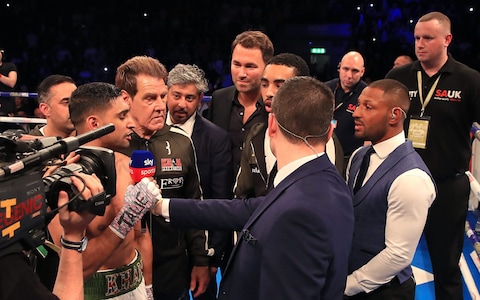 The pair faced off after Khan’s swift KO of Lo Greco last April, but no fight has been scheduled and they continue to age…

Amir has already said he’d still like that fight, regardless of the Crawford result, further down the line. For now though, Brook needs another bout of his own to avoid becoming inactive and losing his momentum: his last in-ring action was a disappointing display last month against Michael Zerafa (25-3, 14 KOs).

Jeff Horn (19-1-1, 13 KOs) is a potential fight prospect in May, if recent reports are to be believed. The Australian international came up short against Crawford himself last year but his promoter Dean Lonergan is eager for another middleweight test. Time will tell.