Despite dropping his first set of the tournament, Novak Djokovic was clinically ruthless when he needed to be against exciting teenager Denis Shapovalov – winning 6-3, 6-4, 4-6, 6-0 during the pair’s first meeting on Saturday morning.

It took two hours for Denis to earn a set against the world number one, but that was by no means an easy feat against a player as dangerous and experienced as Novak.

The 14-time Grand Slam winner quickly stamped his authority, breaking the 19-year-old’s serve on three occasions while converting his only break-point opportunity in the second set while leading 5-4.

As Djokovic’s hold over the match loosened midway through an unpredictable third set, the Australian crowd started to sense a revival and got behind the Canadian teenager. After all, 4-1 down in the third with essentially nothing to lose, he played with a fearless yet refreshing attitude, refusing to be comprehensively beaten without a proper fight.

Djokovic loses focus as heckler and floodlights frustrate him

The villain in Novak returned once more, as he was unhappy and suddenly unsettled by a combination of things. The bright lights shone during a mid-afternoon match, while he could feel the shift as the supporting crowd really got behind Denis – before a heckler shouted the 19-year-old’s praises in-between points. 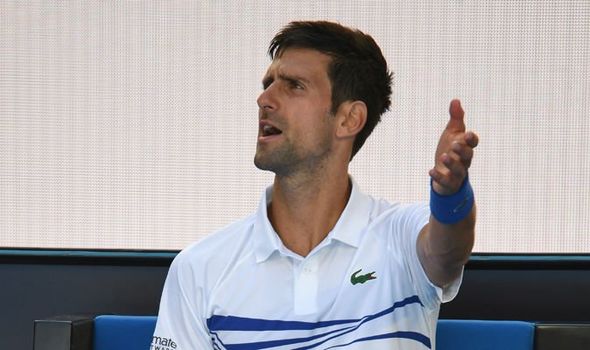 Novak was unhappy that the bright arena floodlights were on during an afternoon match and despite asking the umpire to turn them off, his request was denied. (Picture source: The Express)

He ultimately lost the third set, despite leading 4-1, though that was more to Shapovalov’s credit than the aforementioned factors. Naturally they contributed, though Denis was increasingly aggressive and hit more winners in that set (9) than each of the other three.

Yet the world number one recovers with style

As the fourth began, Novak returned with the same ruthless power and precision which saw him race into a two-set lead. Regularly hitting tough shots, pushing Denis into wide positions and forcing him to miss, the efficient response was refreshing to watch – particularly given Djokovic’s well-documented struggles when relinquishing control in matches.

The Eurosport commentators were just as surprised: jovially suggesting the Serbian has a hidden switch which allows him to drift and suddenly come alive when challenged.

As for the match itself, it was quickly getting away from Shapovalov. He struggled to continue matching Novak, which is easier said than done. It took an hour for him to settle and given the circumstances, increasingly tough against one of the all-time greats. Missing shots more regularly, he cut a forlorn figure at 4-0 down as the match once again slipped from his grasp. 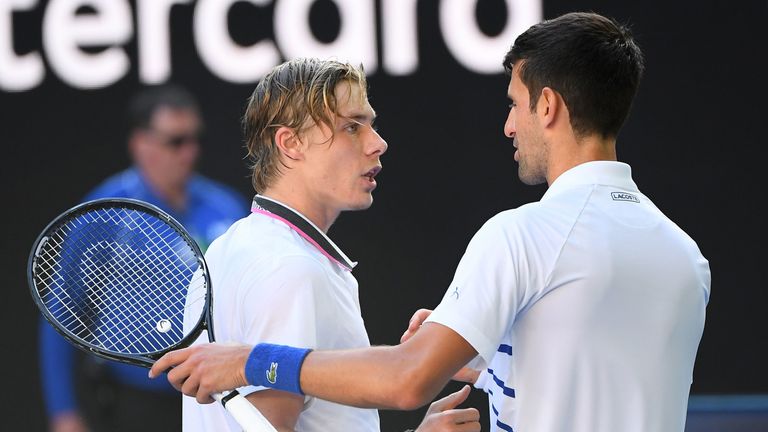 Trying to avoid a fourth-set bagel, he approached points aggressively but it came at a cost: three successive unforced errors gifted Novak two match points. Although he saved both, a double-fault at advantage down was an underwhelming end to an intriguing watch – one we could be seeing a lot more of in the years to come.

The reigning Wimbledon and US Open champion will next face Russian 15th seed Daniil Medvedev, who has made his best Grand Slam showing in his career by reaching the fourth round after a surprising straight-sets victory over David Goffin.

During his post-match interview with Jim Courier, Novak revealed his frustrations towards the light situation in more detail:

“I think there was no sense to turn the lights on the court at 5pm, when we have another four hours of daylight. I thought it was completely unnecessary to turn on the lights – the explanation I got was for TV reasons, so I hope the viewers enjoyed it.”

On how he responded after losing the third set, he said: “I just tried to weather the storm. Denis played well and I made unforced errors to let him back in the match. He showed his quality and why we will see a lot of him in the future.”

Some of the world’s upcoming young talents have been pushing the top players in recent years, though it hasn’t translated to major Grand Slam triumphs yet. Stefanos Tsitsipas, Frances Tiafoe, Alex de Minaur, Shapovalov represent the next generation who are all 20 or younger – while Alexander Zverev (21) is the world’s number four and also earned his fourth-round berth with a routine victory today.

“I think you mentioned all the names that are led by Sascha Zverev who is 21 but has been an established top player in the world in the last couple of years and has started to win major tournaments,” Novak continued.

“It’s great to see new faces challenging the best players in the world and coming out on the court confident and believing in themselves.”

Novak lost just 11 points, including the aforementioned two match points, in a fourth-set that flew by. After taking a brief interval off-court, it allowed him to regain his focus and composure – leaving Shapovalov no chance to recover.

Despite the manner of his defeat, Denis was appreciative of the opportunity and will have learned from the experience too. He said: “Honestly, it was an amazing atmosphere. It was great to have so many supporters – especially late in the third set, they were really rooting for me and helped me pull out that set. It was so much fun to play on such a big court with an amazing crowd, a dream come true for me.”

“Honestly, I’m a little sorry for them that I did run out of fuel a little bit in the fourth set. The third was when I finally started to let loose – found my serve starting to go again and was able to really show my A game. With the first two sets being that tight, just that little bit nervous, it just drained me in the end.”

“Novak’s definitely a guy who doesn’t give you anything, honestly. You have to be there the whole match, every point. If you have any dips, he’s going to take advantage – that’s why he’s so good, number one in the world. I felt that and am definitely mentally tired right now, kind of want to take a nap.”