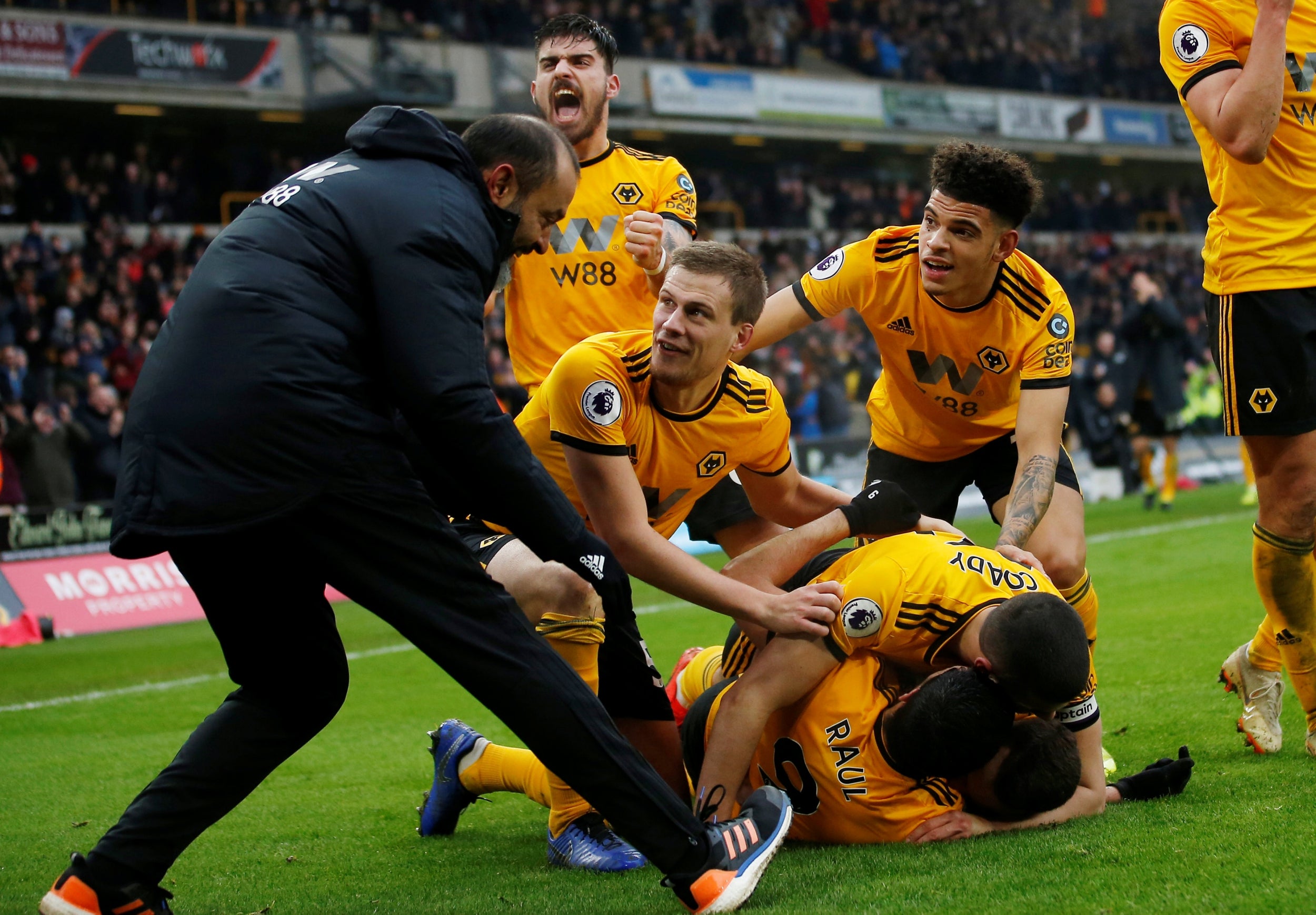 Diogo Jota’s hat-trick – completed in stoppage-time – helped Wolves snatch an important win against a dismal Leicester defensive display at Molineux, in one of the Premier League’s games of the season so far.

Having already netted twice and with time ticking down, it seemed as though the two sides would be deadlocked at 3-3 after Leicester’s own second-half revival. However, Jota had other ideas – benefiting from a poorly-attempted offside trap to convert Raul Jimenez’s low cross.

Wolves manager Nuno Espirito Santo was sent to the stands after running to celebrate with his players, while contrastingly, Claude Puel was seeing with his face in his hands. He couldn’t believe, given their quick turnaround, that his side were going to relinquish another promising opportunity for a hard-earned point.

The manner of this latest defeats adds yet more pressure on Puel’s shoulders, as Wolves have leapfrogged them into eighth place after their 10th loss in the top-flight already this term. They’ve only played 23 matches.

Jamie Vardy and captain Wes Morgan were seen arguing as they trudged off into the tunnel at Molineux, while the rest of the visiting players seemed in sheer disbelief at the way in which they had just lost. As for the hosts, they were justifiably bouncing and the Wanderers faithful boisterous at full-time.

Kasper Schmeichel’s excellent fingertip save to thwart Ruben Neves from distance was a sign of things to come. Just 60 seconds later, he was helpless to stop Jota from close-range – after the winger escaped Danny Simpson’s attempts to prod home Joao Moutinho’s cross. 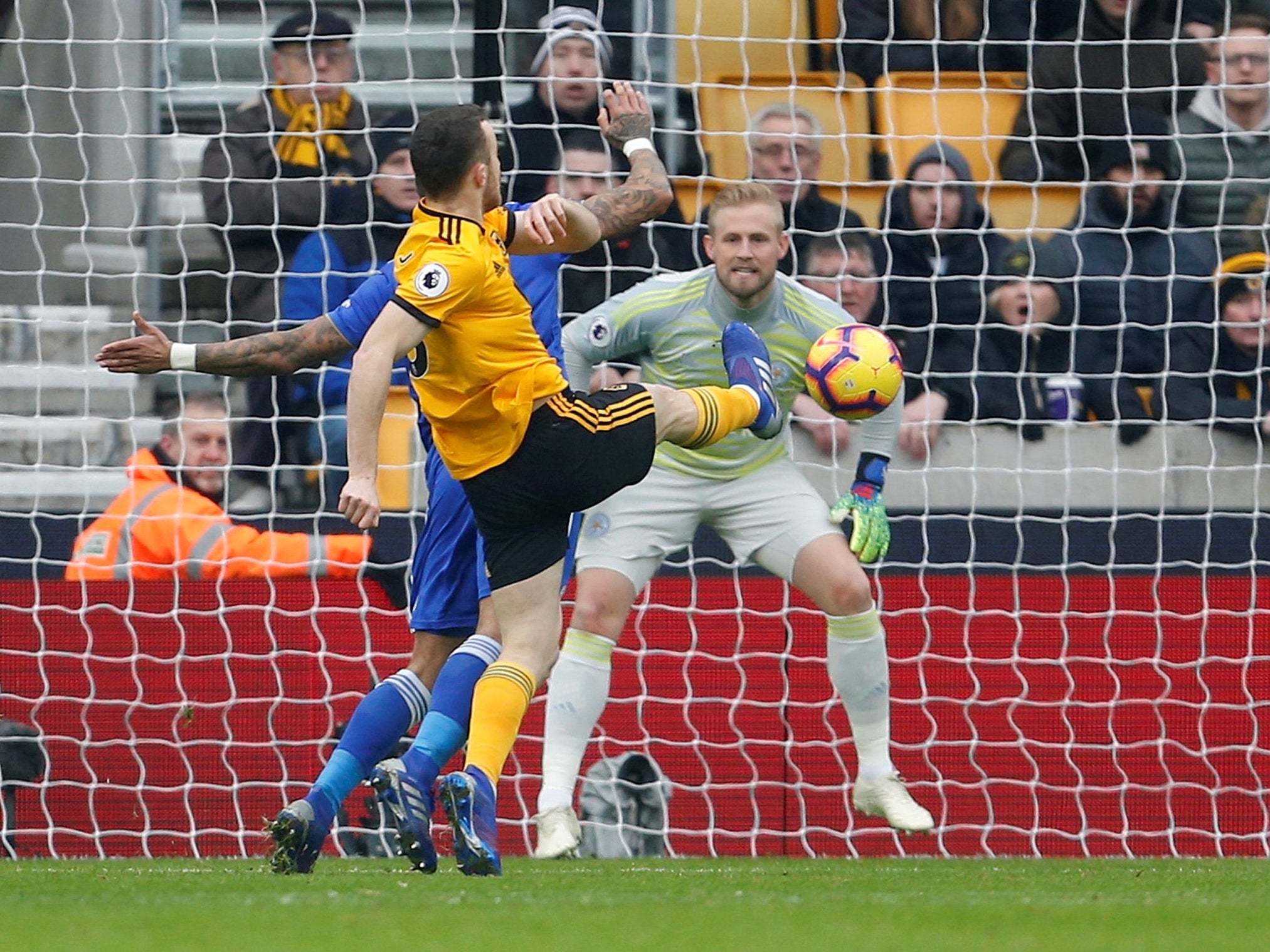 Leicester’s backline seemed like they left their defensive capabilities on the team coach and yet, it was about to get worse. Rui Patricio had a nervy moment up the other end, almost presenting Jamie Vardy with a quick-fire equaliser after dithering in possession – but Harry Maguire was at fault as Wolves doubled their lead in the 13th minute.

Ryan Bennett leaped above the England defender to head home with aplomb as Leicester were left stunned. It could have been 3 or 4-0 before the interval, though Schmeichel made important saves to deny Jota and Raul Jimenez.

If their lethargic first-half performance was anything to go by, it was still to be a long afternoon for the Foxes. Instead though, they reacted positively and Demarai Gray produced a moment of individual brilliance after 47 minutes to reduce the deficit and provide a foothold in the game.

The winger accelerated with the ball from near the halfway line, advanced towards goal and skipped beyond three Wolves players – like they were not there – before rifling a low effort beyond Patricio into the bottom corner. 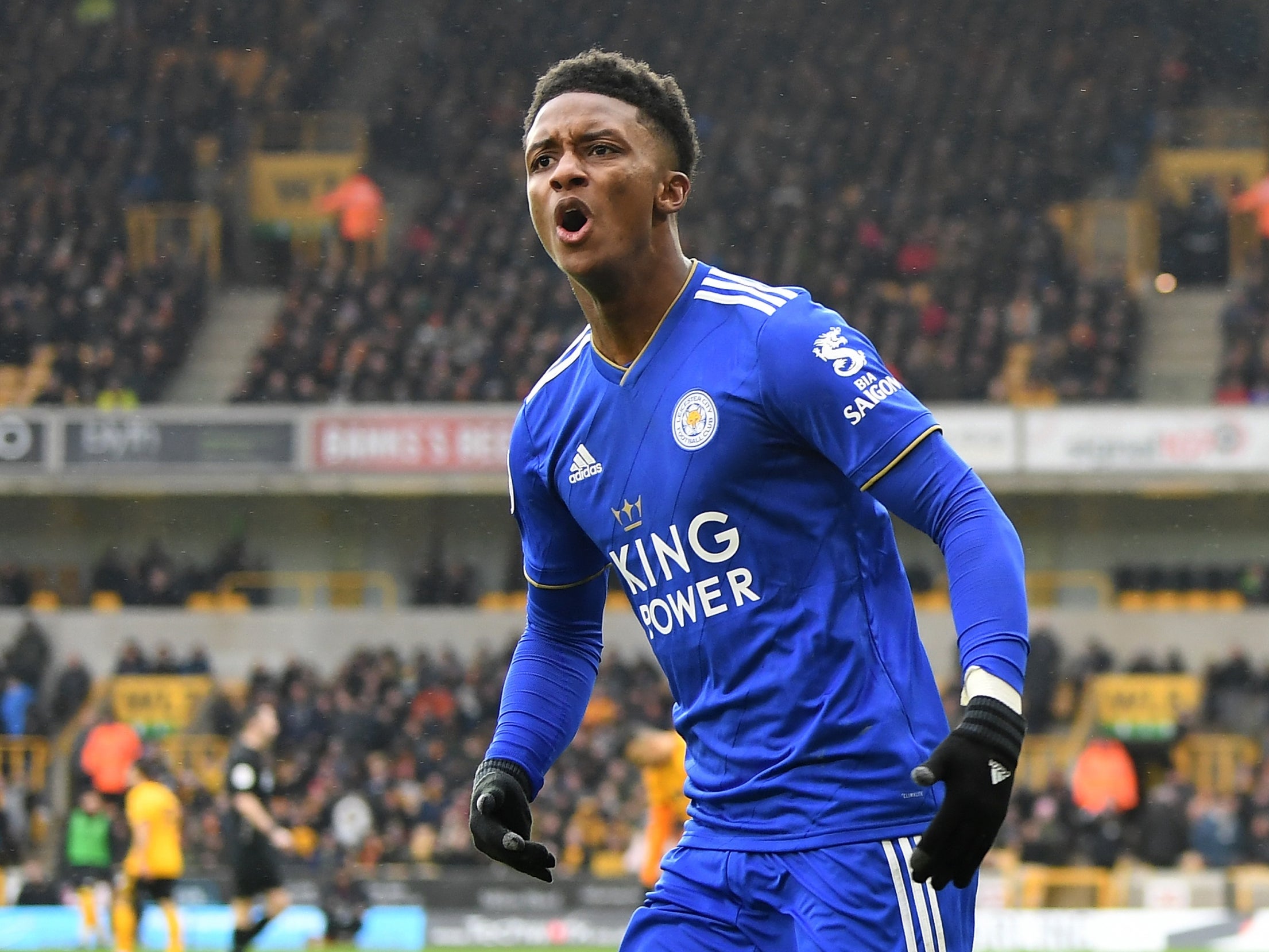 Demarai Gray urges the visiting supporters to celebrate after his emphatic finish, which helped Leicester earn a foothold early in the second-half

21-year-old winger Harvey Barnes, who was making his first Premier League start for Leicester, was thwarted by Patricio – before harshly having an equaliser credited as a Conor Coady own goal.

His low effort was driven through Coady’s legs beyond the Portuguese international as Leicester levelled the scoring, though it was not to be his goal. Yet, there was still more action to come.

Wolves – powered by Neves – return with more of their own

The game was now ebbing and flowing at an unforgiving pace, with Wolves regaining their lead in the 64th minute. Ruben Neves’ superb through ball was met by a galloping Jota, who evaded the attentions of Wes Morgan in a foot race before slamming home under Schmeichel despite the Dane’s best efforts.

James Maddison, who was surprisingly named among the substitutes’ bench here, made a cameo appearance and it proved pivotal. His excellent free-kick delivery was met by Morgan – who leaped above both Leander Dendoncker and Matt Doherty to head beyond Patricio’s despairing dive. 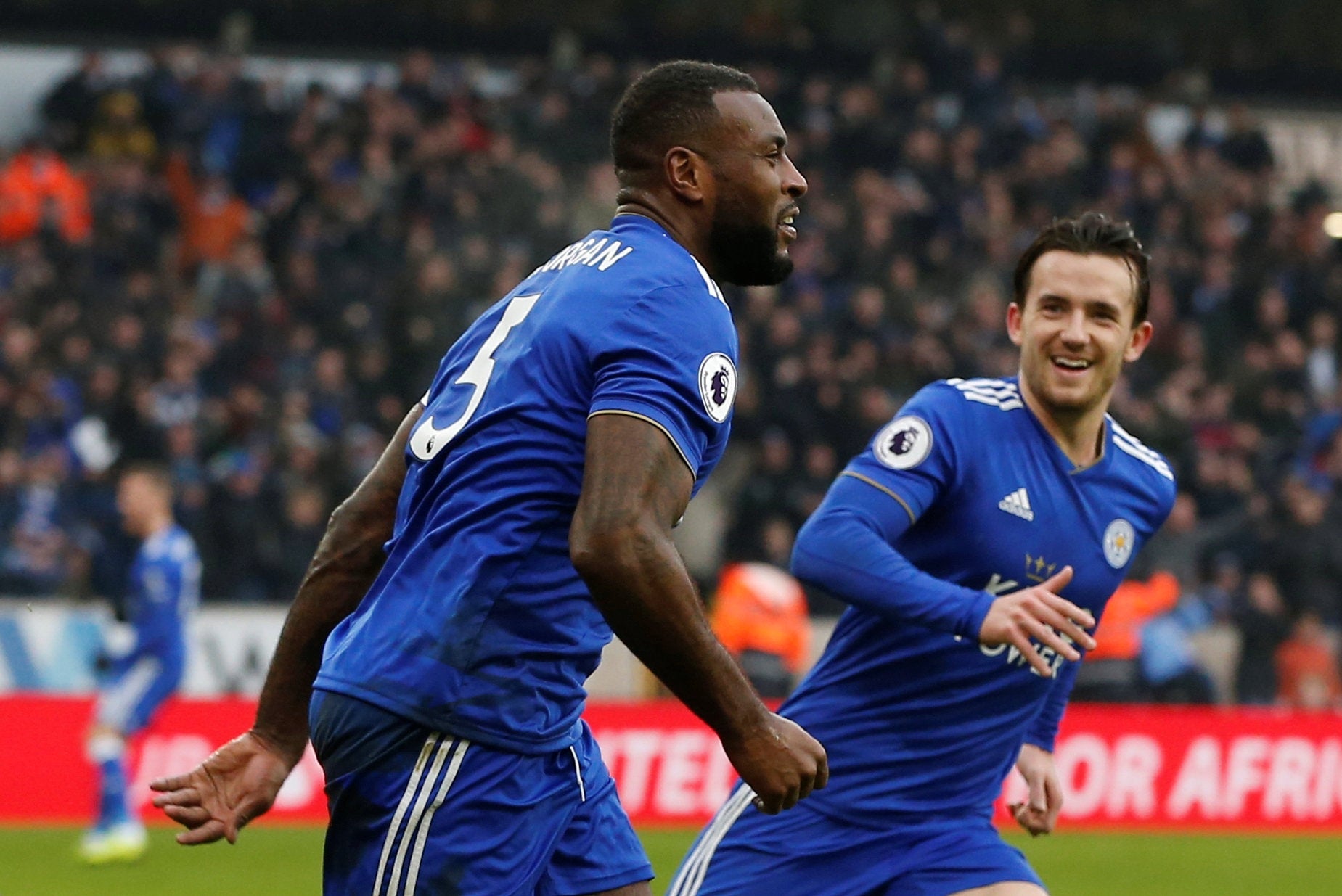 Despite making defensive mistakes of his own, Wes Morgan’s header could have turned out to be a valuable late equaliser – though there was time for one more twist..

3-3 with four minutes plus stoppages to play, surely there was no final twist? It was Morgan’s first goal since their Champions League win against Sevilla in March 2017 and considering he was involved in two of Wolves’ goals, it would have meant even more to him, making up for his earlier defensive mistakes.

Jota to the rescue for Wolves

Alas, there was one final piece of drama to come. After Jota failed to get his feet set in a goalmouth scramble, the former Porto man would have been wondering if he’d missed his big chance to be the hosts’ matchwinner. 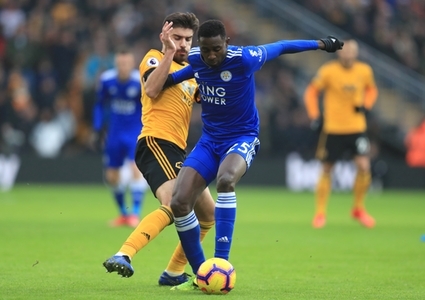 Leicester’s poorly-timed offside trap was duly punished, as Neves’ excellent passing range was on show once more: finding Jimenez in space out wide, he teed up Jota – who couldn’t miss.

Espirito Santo and the rest of the Wolves team ran over to celebrate, after all, they scored a winner with virtually the game’s final kick, leaving Leicester heartbroken in an action-packed thriller where poor defending and goals galore ultimately prevailed.

What does the result mean? Final thoughts

It’ll be interesting to see where Leicester go from here, particularly given their lofty ambitions after the shock league title triumph in 2015/16. They have been eyeing a place among England’s top table in amongst the big six, though a lack of consistency and defensive solidity have definitely hampered their chances to bridge the gap – there seriously is one.

It’s easy to forget that Wolves themselves are a newly-promoted side, though one with cohesion and the determination to battle hard during tricky situations in matches – where Leicester have shown a tendency to struggle when teams sit off them, inviting pressure.

Nuno is doing a fantastic job there in the Midlands and despite the defending, this match was a perfect advert for Premier League football from a neutral standpoint.