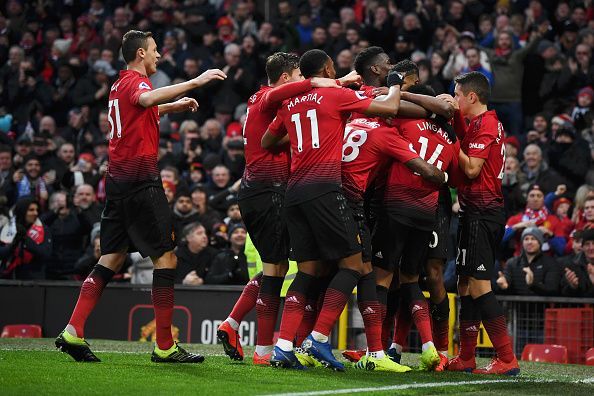 Manchester United made it seven successive wins under caretaker manager Ole Gunnar Solskjaer after a 2-1 home win against a defiant Brighton side – who conceded early but refused to roll over at Old Trafford.

Paul Pogba broke the deadlock from the penalty spot before the half-hour mark, having been hauled to the ground by fullback Gaetan Bong. He made no mistake, slotting beyond David Button to score his fifth goal in his last five league appearances after 27 minutes. 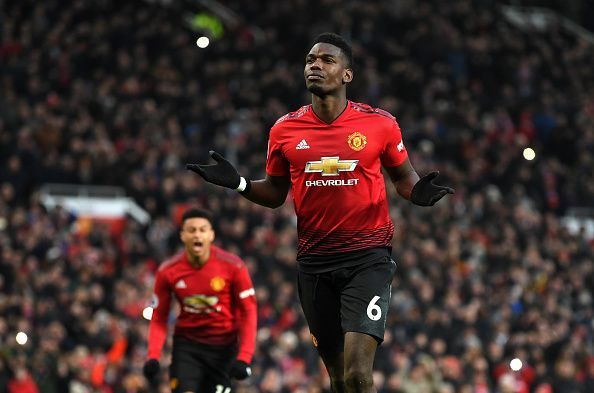 Marcus Rashford had a handful of chances before doubling the lead on the stroke of half-time with a fantastic curling finish, after being teed up by Diogo Dalot down the left-hand side.

Anthony Martial and Jesse Lingard both squandered opportunities to put the game beyond any doubt in the second half before Pascal Gross made the hosts pay after unleashing a well-taken finish which cannoned in off the crossbar.

Davy Propper’s precise through ball was gladly collected by the German, who evaded Phil Jones’ attention and slammed home with aplomb – providing the visitors a lifeline in the final 20 minutes. Shane Duffy came close, David de Gea had a few nervy moments as Brighton pushed for a late equaliser, though United held firm to secure another important victory. With all of that in mind, here’s a look at five talking points from Old Trafford:

#5 Brighton’s defensive strategy has its flaws 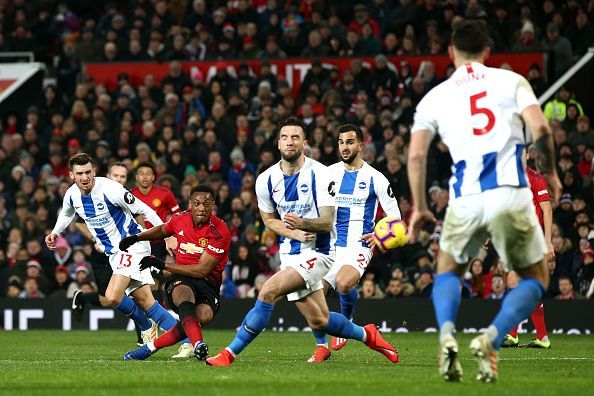 Martial caused Brighton plenty of problems without scoring, though the hosts took advantage of their flaws

Adopting such a defensive approach, it’s interesting to see just how Brighton go about trying to frustrate the bigger clubs – especially away from home. When they concede early on, as they did on this occasion, there’s no real sense of urgency as usual teams of their ability struggle to restore parity unless their opponents gift them a goal and consequent way back into the match.

They defended well here but needed to, as United were attacking from various positions and looked to stretch their visitors left, right and centre. Lewis Dunk and Shane Duffy’s center-back partnership in the top-flight has been identified as one of Brighton’s main strengths, so naturally United were eager not to play to their strengths – aerial duels and interceptions galore.

Both were forced into making important defensive interventions to keep United’s three-pronged attack at bay, but Dunk in particular performed very well. Four tackles, two interceptions, five clearances (joint game-high alongside Victor Lindelof), no fouls committed and would’ve embraced that, playing against a United side full of confidence.

With that in mind, their defensive strategy is somewhat flawed. Given the league’s unpredictability, as well as their current points total, you’d be forgiven for thinking they are safer than their play suggests.

This latest result means Chris Hughton’s side have now only won one of their last eight league games and remain in 13th, failing to make up ground on both West Ham (10th) and Everton (11th) – both of whom lost elsewhere in the day’s other fixtures.

Newly-promoted Cardiff, who sit 18th, are just seven points behind the Seagulls. They can easily be dragged into a relegation battle if they’re not careful with this overly-defensive approach in games. 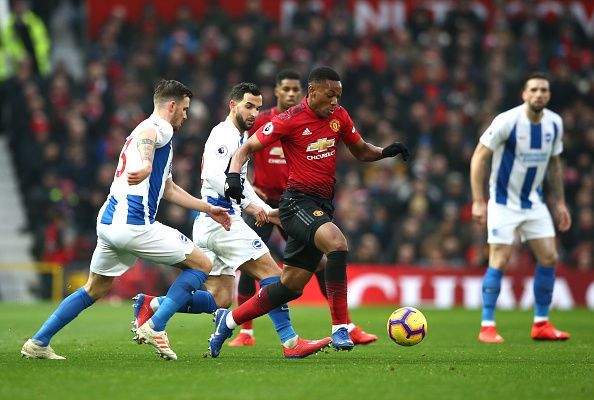 Martial was a constant nuisance for Brighton’s backline to deal with, marauding forward with vigour

Martial did well to get beyond Brighton defenders, though himself and Pogba were both disappointing in-front of goal.

Duffy made an important intervention to thwart the winger with an excellently-timed sliding tackle, while he also had a goalbound effort stopped in his tracks during a bright first-half display.

In 24 appearances this term (all comps), Martial has netted nine goals and created one more. He’s capable of more and naturally performances like these will provide him – as well as the United faithful – with confidence that he’ll continue to develop at a steady rate.

News of a new extension deal being tabled isn’t much of a surprise, given the uncertainty behind his long-term future under Jose and how he’s got 18 months left on his existing contract. If anything, it provides an extra incentive for him to perform and retain his starting berth, which is easier said than done.

Pogba, whose attitude has been questioned in the aftermath of Jose Mourinho’s sacking last month, has scored five goals and created four more since the Portuguese’s departure.

He’s playing with confidence in a free-roam attacking role ahead of Ander Herrera and Nemanja Matic where he’s given the license to roam forward as he pleases but equally does more pressing when out of possession.

Came close with an overhead kick and clearly has the confidence to be trying these audacious moves. As long as his performances remain consistent, questions will not be asked in that regard.

It’s not something you always saw under Jose’s tenure but with expectations heightened, it’ll be interesting to see how he progresses as United have tougher fixtures to come. The standout one is their Champions League tie against Ligue 1 champions Paris Saint-Germain next month. 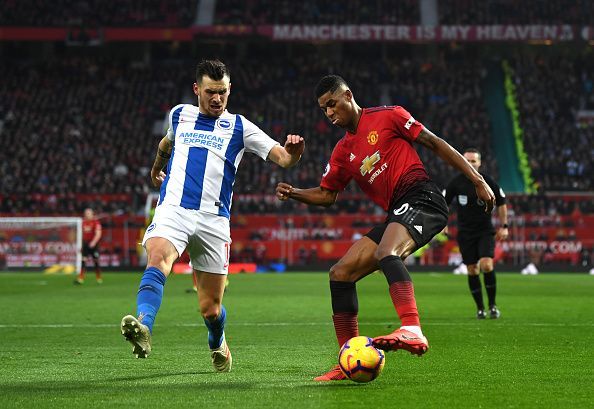 Propper and Gross were Brighton’s only bright sparks, in a game where Bong’s foul on Pogba ultimately proved pivotal. It allowed the hosts to dictate and was always going to be difficult for them to recover, though those two, in particular, were doing their utmost to create chances and frustrate United.

Gross created three key passes, denied David de Gea a clean sheet with a well-taken finish, importantly worked hard and did the type of dirty work that doesn’t always appear on the stat sheet – two interceptions, ran tirelessly throughout and in terms of decision-making, always seemed one step ahead. The goal was nothing less than the visitors deserved for their efforts, though they’ll be disappointed to have conceded in the manner they did.

It was surprising not to see Anthony Knockaert utilized from kick-off, as his pace and direct approach would have been useful to stretch United’s backline. Hughton instead opted for intelligence, guile and a quality passing range which helped though both had their limitations and were unable to effectively provide Glenn Murray with many chances on goal.

The 35-year-old – Brighton’s top goalscorer with eight this term – hasn’t scored since a penalty against Crystal Palace in early December and was more involved in aerial duels and dubious foul calls than goalscoring opportunities. He should have done better, though struggled with limited service.

#2 Rashford Man of the Match display, breaks his own record 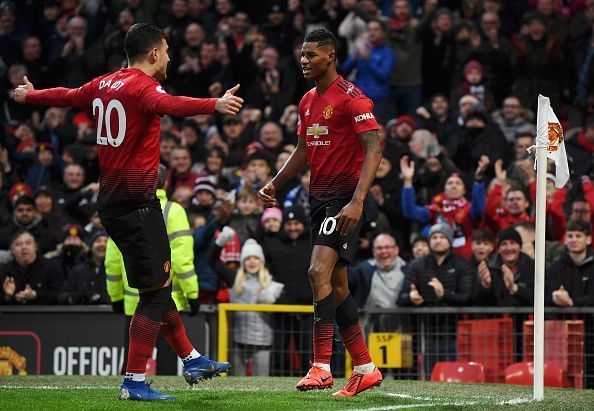 Rashford delivered a Man of the Match performance and really, should have at least had an assist or two, excelling once more against weaker opposition. It’ll provide him with more confidence, while he broke a personal goalscoring record too in the process.

It’s the first time in his career that he’s netted goals in four successive league games, a great finish after being teed up by Diogo Dalot down the far side. He tried some flashy skills, intricate moves, turned creator a couple of times too – hitting a diagonal through ball for Jesse Lingard, who should have done better from close-range to add to United’s lead.

Booked for a cynical challenge on Martin Montoya in the closing stages before being replaced to a standing ovation in second-half stoppage-time, only completed two dribbles but was intelligent in possession, retained the ball well and left more of the trickery and mazy runs to Martial.

It’ll stand him in good stead with tougher fixtures to come, while Romelu Lukaku must be patiently waiting for his chance centre-stage under Ole – again coming on as a substitute. 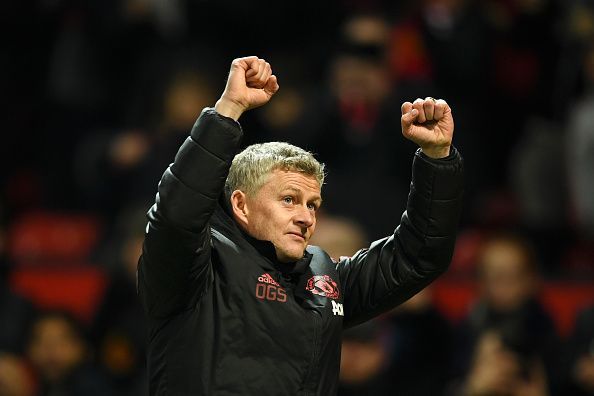 Ole celebrates after another win for his Manchester United side, who continue to gain momentum

They might not have played many good teams barring Tottenham recently, in a match they were fortunate to win, but this latest victory will help provide yet more momentum particularly with the FA Cup tie vs Arsenal to come next week.

You have to give credit where its due – perhaps under Mourinho, they might have just adopted one specific attacking focus against the types of teams who sustain a defensive approach throughout.

After all, they were beaten at the Amex by Brighton earlier on in the campaign – yet instead were proactive here, knowing the Dunk-Duffy combination are strong in the air and relish defending, varying their attacks and making it more difficult.

Some variety in the final third was good as it meant they were unpredictable to defend against, which is even more difficult given the quality of United’s frontline. Arguably not given a license to express themselves previously, they are all high on confidence and it shows with their performances. Rashford and Pogba, in particular, are shining, while Martial and Lingard are both working hard to maintain their starting berths in different ways.

Allowing Pogba to roam forward in space, overlaps with both Ashley Young and Dalot down the flanks, linking up play well while being patient in possession with Matic and Herrera, it’s the type of performance that helps boost morale with a tougher stretch of fixtures to come.

Sure, they would have been frustrated to the only score twice. That was mainly Brighton’s doing, particularly as David Button made a handful of important saves and his backline crucial interventions too.

With that in mind, United are unpredictable so it’ll be interesting to see how they handle this current winning run – extended to seven in all competitions since Mourinho’s dismissal last month. Luke Shaw’s injury in the warm-up meant Dalot started in an unfamiliar role at left-back, yet rarely put a foot wrong.

It leaves them three points behind fourth-placed Chelsea, who lost 2-0 against Arsenal – who are now level on points with the Red Devils after 23 matches this term. With Ligue 1 champions Paris Saint-Germain awaiting them in the Champions League next month, only time will tell if this is a temporary burst of form or meaningful long-term change.