Zaha, 26, has scored three goals and created four more in 20 Premier League appearances this term. Since returning to south London on a permanent basis in 2015, he’s been their best and most important player. An unsuccessful £10m move to Manchester United proved his motivation, establishing himself as arguably the league’s best player outside the top six.

Naturally, the Eagles have fended off rumoured interest from those same teams – including Chelsea and Tottenham. They, among others, have all been said to monitor the Ivorian’s progress in recent seasons.

He scored seven and created 11 assists in 2016/17, while netting nine and setting up five more last term. 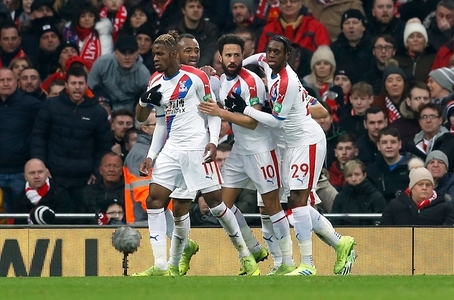 These are impressive numbers for a winger who has inconsistent attacking teammates – particularly Christian Benteke, Connor Wickham and Jordan Ayew. The latter joined on a season-long loan deal from Swansea last summer, but only has one goal in 15 appearances this campaign.

Wickham has been regularly sidelined through serious ligament, calf and groin injuries. Benteke meanwhile, has struggled significantly for regular goals over the past 18 months.

According to the Guardian, Dortmund are said to have already contacted Zaha’s representatives over a potential transfer. Christian Pulisic, who joined Chelsea earlier this month for £58m, will not arrive in west London until the summer – so Zaha is seen as a long-term replacement for the 20-year-old.

Ahead of their FA Cup fourth-round clash with London rivals Tottenham this weekend, manager Roy Hodgson was quizzed about these new developments.

“We don’t know [about that, there’s been absolutely no dialogue whatsoever between the two clubs. If I comment every time a club is linked with Wilf, I will be talking for a long time. Wilf signed a long-term contract and is very much our player.

“I’d be very surprised if there were any clubs out there who wouldn’t think he’s very good, but that doesn’t mean to say they are going to try and buy him.”

Zaha is reportedly open to a move to Germany, as he’s keen to play in the Champions League. Having signed a new £130,000-a-week deal last year, it’ll be interesting to see how Dortmund try negotiating a potential fee.

Palace appear resigned to losing him at some point, and would demand a high figure for his services. A fee in excess of £50m has been reported, especially as they’re struggling for quality in the final third themselves.