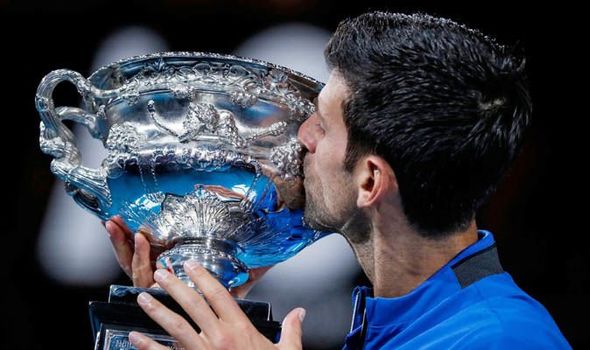 Novak Djokovic’s excellence was on full display as he dominated against a nervy Rafael Nadal 6-3, 6-2, 6-3 to win his third consecutive Grand Slam and a record-breaking seventh title in Melbourne.

In only two hours and four minutes, Novak Djokovic sealed his seventh Grand Slam triumph in Australia: number 15 on his professional career to date. It wasn’t meant to be this easy.

But considering the fact he recorded only nine unforced errors throughout the match – Nadal had 28 – while racking up 34 winners, perhaps the manner of his latest win shouldn’t be surprising.

He started quickly and essentially blitzed Nadal, who for all his strengths had yet to face such a formidable opponent since his return from injury two weeks ago. Made to work and cover ground aplenty, it proved too much for Rafa to deal with.

Impressive wins over rising stars Frances Tiafoe and Roger Federer’s conqueror Stefanos Tsitsipas in the previous two rounds meant he had plenty of momentum before this encounter – having not dropped a set before today. Novak had dropped two, one apiece against Denis Shapovalov and Daniil Medvedev, but crucially stepped up his game when it mattered most. 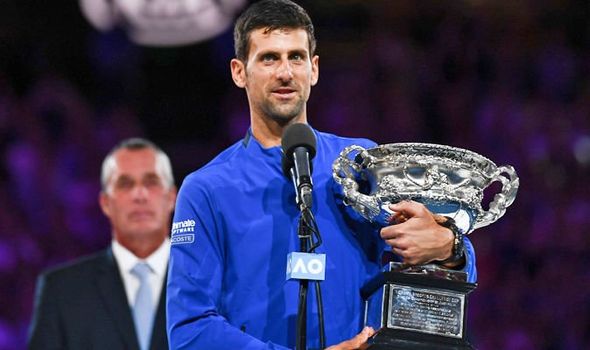 Novak during his post-match speech, alongside the Norman Brookes trophy that he has now won a record-breaking seven times. (Picture source: Reuters)

Novak races into a two-set advantage

That was certainly the case here too, as he raced into a two-set lead after little more than 70 minutes at the Rod Laver Arena.

Nadal started slowly and appeared tentative at times with his approach. Novak sensed this, pouncing on the Spaniard’s hesitation to make him pay. Eight aces, constantly winning points on serve and recording just four unforced errors, this was sublime tennis to watch.

Rafa’s unforced error count continued to rise and in a match of such magnitude, this was always going to hurt him. 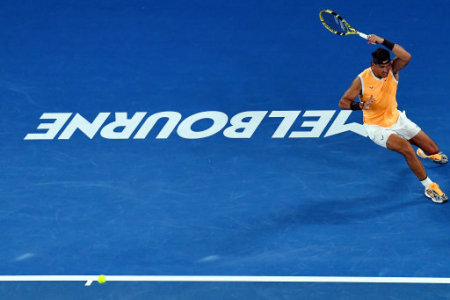 At the start of the third, Novak had only lost six points on serve – while winning seven of his ten service games without dropping a point. Ruthlessly efficient, I don’t think we’ve seen him play any better than this across his career.

Supporters sensed the match was rapidly slipping away from Nadal and it became evident. The five-set thriller many were hoping for, probably would be saved for another day.

Djokovic hit a ridiculous return ace cross-court from a tough angle which left everyone stunned, Nadal included. By this point, he was perhaps privately resigned to defeat. 25 winners to Nadal’s 16, the longer points were, the more likely Novak would come through victorious in them.

However, Rafa’s never-say-die attitude meant the possibility of mounting a comeback was always there. He saved one break point at 1-1, but a deft drop shot made him miss again while more errors and effortless Djokovic winners saw Novak open a 3-1 gap in the set.

Nadal finally made his service game count with some clutch serving, though Djokovic saved a crucial break point after making successive errors of his own before unleashing another winning down-the-line to make it 4-2. That game was important as Djokovic knew he needed to avoid gifting Rafa any real momentum.

Like the champion he is, Nadal persisted. After an unsuccessful challenge and brave but well-executed second serve, he applied more pressure on Novak’s advantage in the set at 4-3.

A routine volley and ace helped Novak dictate the next game, though Nadal’s trademark backhand and winning a lengthy rally of his own brought deuce – the first for a while. He quickly relinquished that after Djokovic’s excellent serve and a subtle shot at the net saw him 5-3 up, a game away from history.

Serving to stay in the match after one hour 59, Nadal knew it was now or never. Having saved one championship point, he hit another shot wide and with his arms aloft, Novak secured a record-breaking seventh Australian Open title – becoming the first player to defeat Nadal in straight-sets in a Grand Slam Final while doing so.

Nadal was quick to congratulate Novak, while reflecting on what a difficult year 2018 proved to be for him on a personal note with his persistent injury problems. 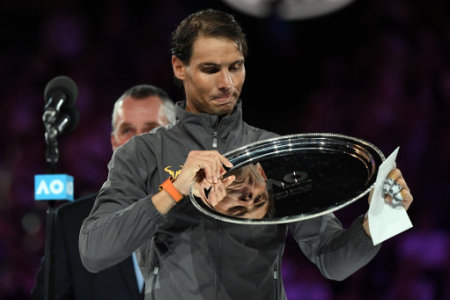 “Many congratulations to Novak, well done for everything – it was an amazing level of tennis tonight. Having been very emotional, tonight was not my best but I had somebody who played much better than me.”

“I have been through some tough moments in my career, including this one. I feel great that I could be here, despite all my injuries. This tournament has been tough but having not played a match [after surgery] coming into this, it will be inspiration for me going forward.”

Djokovic, who had surgery himself this time twelve months ago, reflected too on a whirlwind year:

“I had surgery exactly 12 months ago. To be standing here and lifting this title is truly amazing, I’m speechless. I’d like to thank my team for supporting me, Marian Vajda for coming back into my box.”

He went on to thank various members of his family from brothers and mother to his wife and children, loyal supporters and also the Australian Open itself, hailing it as the world’s best.

“This is the best tournament in the world, you guys made this so special,” he continued. “I can feel it in the city and I’m grateful for this experience. Thank you for making it better every year, it’s an honour to play in-front of you and I can’t wait to be back next year.”

No player in tennis history has more and his performance levels over the last fortnight have been frightening to watch. The shots he makes, his impressive array of winners and shots to choose from, as well as the seemingly effortless manner with which he plays is unrivalled. At 31, there’s no reason why this cannot continue for many years to come.

Sure, the young guns are trying their utmost to keep up – as they should. Federer is winding down and although Nadal’s injury struggles have hampered his progress, they have done the same for Novak in recent seasons too. We’re witnessing true greatness.