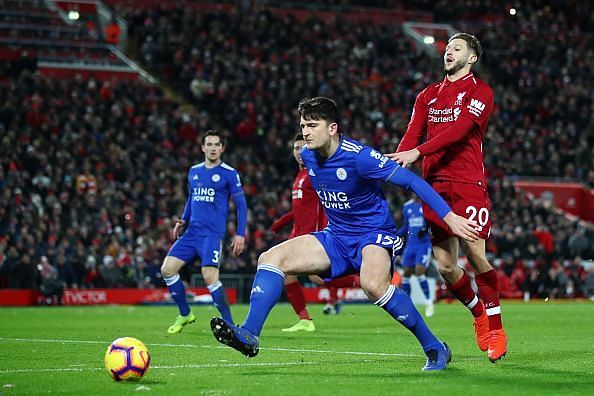 Liverpool missed the opportunity to extend their lead over defending champions Manchester City to seven points, after being held to a 1-1 draw against an inconsistent Leicester side at Anfield.

Goals from Sadio Mane and Harry Maguire meant the spoils were shared between the pair, although Jurgen Klopp’s men have been left to rue squandered opportunities during a frenetic affair on Merseyside.

For the visitors, creative midfielder James Maddison missed two golden chances to score while their aerial dominance proved too much for Liverpool to handle. Alisson made a few mistakes in possession while the Foxes worked hard for a point, but could’ve easily snatched all three themselves.

City, who were surprisingly beaten 2-1 by Newcastle on Tuesday night, know another loss has only added pressure on their shoulders, in an exciting title race this campaign. With all of that in mind, here’s a look at five talking points: 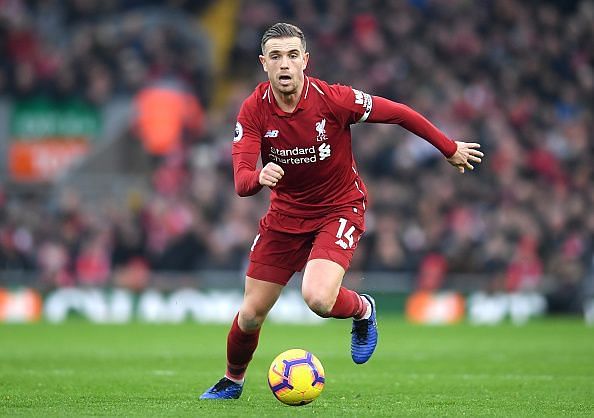 Given the Reds’ current injury problems at right-back, Jordan Henderson was deployed in an unorthodox role at right-back. The club captain, 28, was prepared to step in and performed admirably during a tough test – up against Demarai Gray down the flanks.

Early on, he was fortunate not to have given away a free-kick just outside the box for a cynical tug on Maddison. After all, Leicester’s goal came directly from one after left-back Andrew Robertson needlessly gave away an inswinging free-kick – from which Maguire applied the finishing touch.

Other than that though, Henderson was solid. Providing a creative outlet with lung-bursting runs into the final third, he was eager to have possession and also defended competently. His five aerial duels won was only bettered by one player across the two sides, while he completed three tackles and clearances.

For a player who was seemingly out-of-favour before Christmas, Henderson has performed well in recent weeks and his performance here justified Klopp’s continued faith to play him. He has now started and completed a full 90 in four consecutive league games, compared to just five in 20 fixtures before 2019.

#4 Mane proves his worth again while others struggle 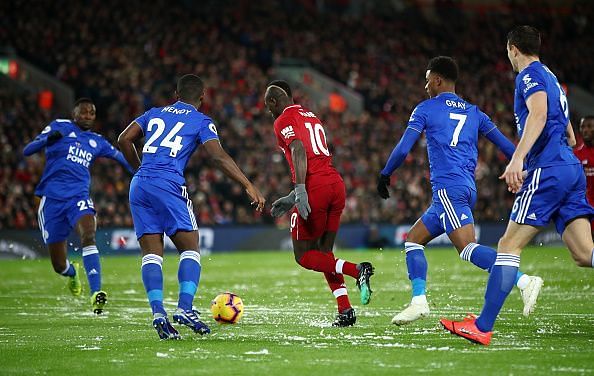 Mane’s solo strike two minutes in was a well-taken finish, from Liverpool’s best player on a frustrating night

In a game of fine margins, Sadio Mane was easily Liverpool’s best performer. Although his finishing is inconsistent and decision-making more so at times, the Senegalese winger continues to prove his worth in games like these – hotly-contested battles where chances are few and far between.

His solo effort to break the deadlock after just two minutes was excellent. Dancing past opposition challenges before slotting beyond Schmeichel into the bottom corner, he took his goal well and provided an early morale boost for Liverpool, one which they ultimately failed to fully utilise.

It was Liverpool’s earliest league goal since April 2016 and he continued being a nuisance throughout. Two key passes and dribbles, fouled on four occasions and happy to put in a defensive shift out of possession, he was unlucky not to double their lead with a free header shortly afterward.

As for his creative teammates, both displayed flashes but were effectively isolated by an organised Leicester backline throughout. Mohamed Salah’s 69.6% passing accuracy was a team low, while the Egyptian forward found himself dispossessed on seven occasions.

Roberto Firmino had two promising chances saved, but should have done better and also found himself dispossessed often: six times before being replaced by Daniel Sturridge with time ticking down. Besides their 2-1 defeat by Manchester City on January 3, this result marks the first time that Liverpool have dropped points in England’s top-flight since November 3 away against Arsenal. It’s a remarkable statistic and although Leicester worked hard for a draw, the game was overshadowed by some dubious officiating decisions that went against Klopp’s men.

With Jonny Evans completely missing the ball and Mane rushing through towards a probing long pass goalwards, Maguire upended the Senegalese winger. Clearly the last man between Mane and Schmeichel in goal, the referee paused before booking the Englishman – who went on to score Leicester’s equaliser in first-half stoppage-time.

As Naby Keita shaped to shoot inside the box, Ricardo Pereira’s last-ditch intervention saw the Guinea midfielder fall to the turf claiming a spot-kick. The referee waved play on, suggesting he was looking for a penalty and contact was minimal. 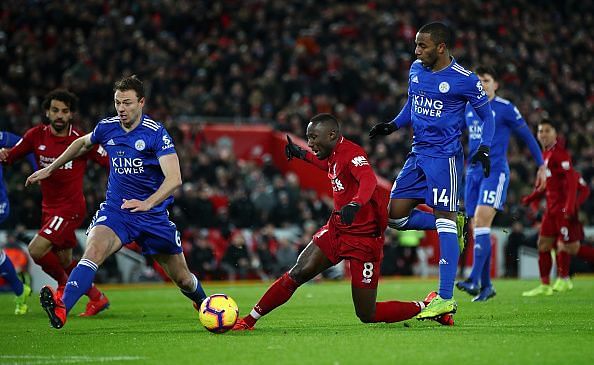 Pereira’s challenge to stop Keita’s effort on-goal saw him tread on the Guinean’s heel, though no penalty

Truthfully, you could argue both sides for each instance. Maguire’s challenge was a cynical foul to stop Mane in his tracks, though he was alongside him – not yet beyond the defender – so perhaps it wasn’t as clear-cut from Atkinson’s perspective. There was clear contact between Pereira and Keita, although the latter seemed like he was already beginning to fall when the challenge came in. Either way, Liverpool fans were quick to make their feelings clear. 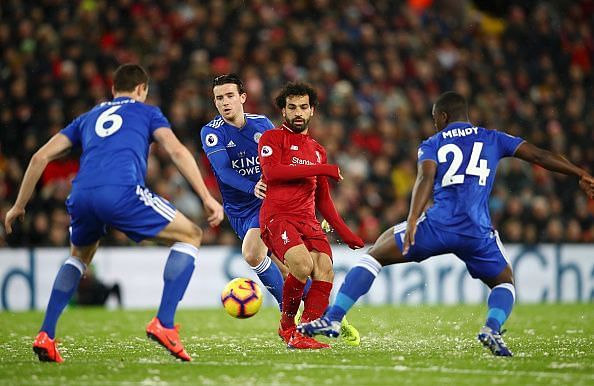 Disregard your opinion on whether Pereira’s challenge on Keita was a penalty or not – the 25-year-old, who only signed from Porto for £17.5m last summer, is fast proving himself as one of the Premier League’s best fullbacks in a duo alongside Ben Chilwell.

Chilwell, 22, has unsurprisingly been linked with a big-money move to Manchester City in recent months after impressing well enough to earn senior call-ups for Gareth Southgate’s England side in 2018.

The pair combine to provide both defensive stability and attacking threat down their respective flanks for Leicester, while proving two of Claude Puel’s most dependable performers this season. It was evident again at Anfield, where they relished coming up against Liverpool’s feared trio and actually isolated them – which is easier said than done. 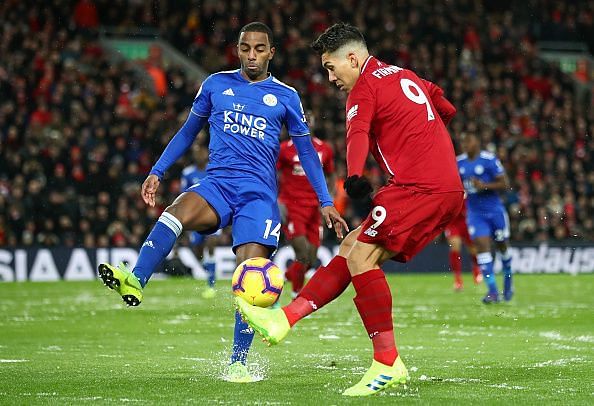 Pereira impressed, but Chilwell was Leicester’s star player and both had commendable match stats to show for their work.

#1 Hard-earned point, but can Leicester build for a Euro push? 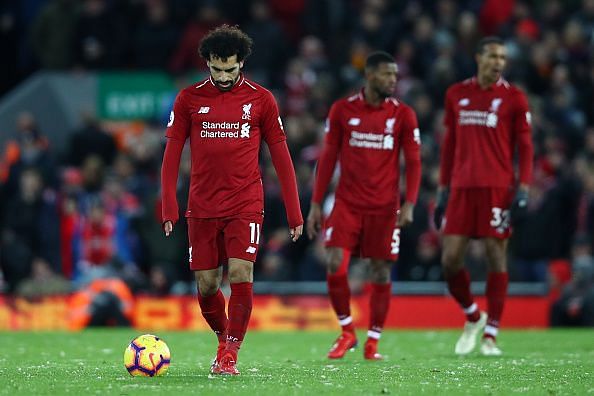 For all their inconsistent results this term, Leicester’s credible 1-1 draw against the league leaders means they find themselves just three points off newly-promoted Wolves, who are currently sitting pretty in seventh place with 35 after 24 games.

The Foxes have lost more games (10) than they have won (9) under Claude Puel this term and naturally, pressure has continued to rise on the Frenchman’s shoulders after narrow defeats and disappointing results against winnable opposition.

Slender losses against Southampton and the aforementioned Wolves in recent weeks haven’t helped matters, after a tricky Christmas period which was worsened following their shock FA Cup defeat by League Two side Newport County on January 6.

However, not all is bad at the King Power. They have shown a steely determination to perform well against top sides and if they’re able to attain some consistent form going forward from here until the season’s end, there’s no reason why a European berth – ala Sean Dyche’s Burnley last season – isn’t an achievable goal for Puel’s men to target in May.

Within the squad, there is bonafide quality to achieve such targets this season. Ultimately though, it all boils down to whether the players can collectively apply themselves on a more regular basis and avoid slip-ups where possible to pick up maximum points. As Liverpool themselves can attest to, every point matters.