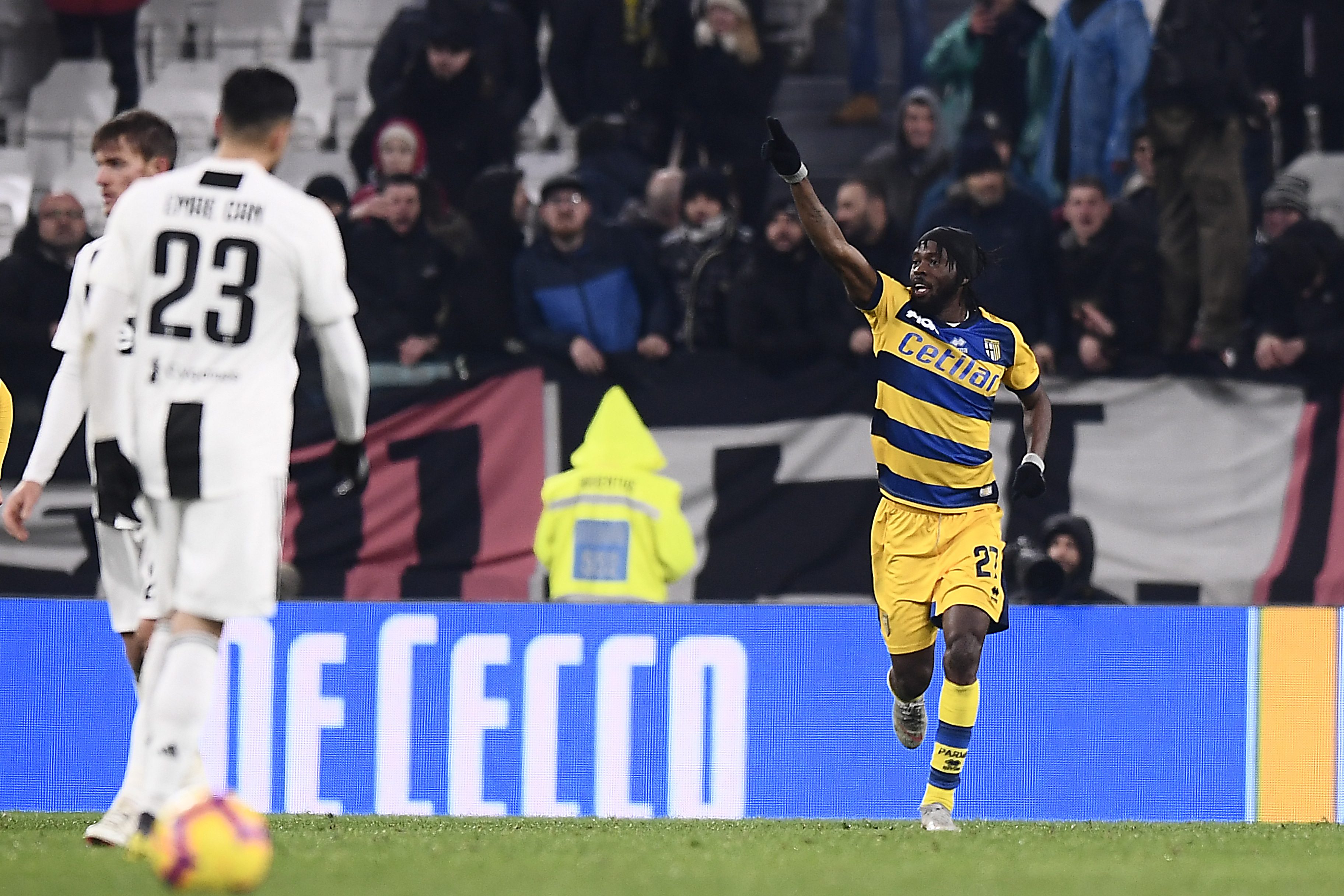 Parma forward Gervinho scored a brace in the final 15 minutes as his side recovered from 3-1 down to draw 3-3 in stoppage-time away at Serie A leaders Juventus, who dropped points in Italy for only the third time this season.

Gervinho, who played for Arsenal between 2011-13, joined newly-promoted Parma from Hebei China Fortune last August on a free transfer. The 31-year-old winger has now netted eight goals and created two assists in 16 Serie A appearances this term – with five goal contributions in their last three fixtures.

His equaliser came in bizarre fashion, as Juventus were not-so-subtle in their attempts to waste time and were being pressed deep into their own half, dangerously near Mattia Perrin’s area.

Mario Mandzukic, who set up Cristiano Ronaldo’s second, chose to be audacious. It backfired massively. Attempting to flick the ball over two oncoming players near the corner flag, his pass was intercepted and evaded the attentions of left-back Leonardo Spinazzola, on the edge of the box.

Riccardo Gagliolo was first to the ball, flicking it into Roberto Inglese’s path. He still had work to do, leaving Daniele Rugani in his wake with some great hold-up play before teeing up an unmarked Gervinho. He fired hard and straight at Perrin, who could only parry it in off the crossbar.

Gervinho made no mistake from close-range to equalise in heart-stopping fashion, after three minutes of stoppage time. (Picture source: Sports Mole)

Ronaldo at forefront as juve race into comfortable lead

The game was never supposed to finish this way. Especially after Cristiano Ronaldo scored a brace of his own – making him Serie A’s top goalscorer with 17 this season.

Juventus, still unbeaten and pursuing an eighth successive league title, have dropped a bit of pace on nearest rivals Napoli – who closed the gap to nine points after their 3-0 win over Sampdoria earlier in the afternoon.

Cristiano Ronaldo also scored twice, making him Serie A’s leading scorer with 17 goals, to put Juve in command but a brilliant flicked goal by Gervinho followed by a stoppage-time equaliser meant the Turin side’s lead over Napoli was cut to nine points.

Massimiliano Allegri was naturally furious at the manner of Parma’s equaliser, particularly as they needlessly relinquished possession trying to play out of defence.

“The third goal was incredible, we had the ball by the corner flag… and then we played it into the penalty area. You can’t do that in the 95th minute. There’s no shame in just kicking the ball into the stands.”

Ronaldo’s first was a commendable effort, albeit poor goalkeeping from Luigi Sepe. After receiving a pass from Blaise Matuidi, he struck goalwards – while slipping – and watched his deflected effort flash beyond the 29-year-old.

Ronaldo – the league’s leading goalscorer with 17 this term – scored a brace but his joy was ultimately short-lived.

Juve were awarded a spot-kick for a foul on defender Martin Caceres at the end of the first-half. It was revoked shortly afterwards though, after an official review on the pitchside monitor.

Rugani doubled the hosts’ lead after 62 minutes with an emphatic volley after a goalmouth scramble and ricochets across the box. Parma, who were much improved after the interval, were not going to give up.

Antonino Barillà halved the deficit with a well-taken header after Juraj Kucka’s excellent searching pass, before Ronaldo completed his brace with an impressive headed finish of his own – leaping above his marker and ignoring the visitors’ attention with Cristiano’s trademark attacking positioning.

Teed up by Mandzukic’s delivery down the right, the pair celebrated restoring Juve’s two-goal advantage but the game was far from over.

Kucka’s playmaking abilities were on display once more as he set up Gervinho with a low cross. Gervinho’s clever back-heeled flick hit Rugani and trickled beyond Perrin at his near post, gifting Parma hope that a comeback was still on the cards.

It certainly was, and Gervinho’s stoppage-time strike means they edge further away from mid-table obscurity.

Juventus clearly miss Giorgio Chiellini (calf) at the heart of their backline, as their central defensive partnership was unconvincing to say the least under pressure. Normal first-choice Wojciech Szczesny watched from the substitutes’ bench on this occasion, while Perrin should have done better to stop both of Gervinho’s goals – especially the third.

It’s not a criticism on Parma’s behalf, as they gave a good account of themselves and deserved a hard-fought point in the end. For Juve though, they’re not perfect and this was precisely the type of game they cannot afford to relinquish leads in.

3-1 up, they managed to squander two points after conceding preventable goals. With the Champions League knockout rounds making their return this month, it’s not an encouraging sign.

“It wasn’t easy to get back into the game from two goals behind, but the lads did really well and got their reward,” – Parma boss Roberto D’Aversa

They leapfrog Sassuolo into 11th place with 29 points from 22 games. Sassuolo play away at Genoa tomorrow, while the newly-promoted side are just four points behind Sampdoria in 6th – the final Europa League spot.