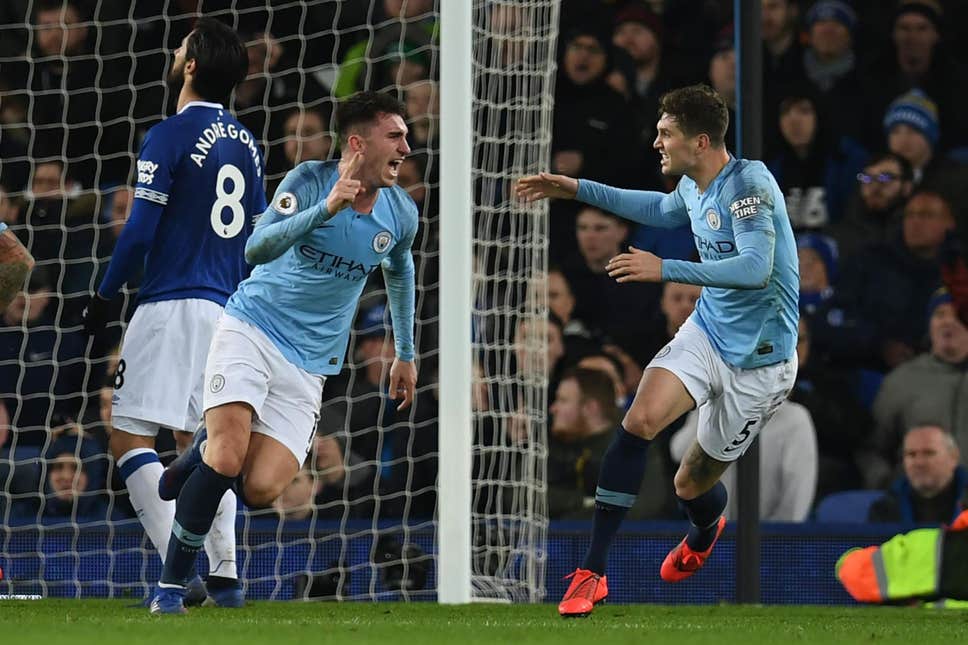 Stoppage-time strikes in either half from Aymeric Laporte and substitute Gabriel Jesus ensured Manchester City returned to the Premier League summit, after Liverpool’s 1-1 draw with West Ham on Monday. The 2-0 home defeat means Marco Silva’s Everton now have 11 league losses this term, including four in 2019.

The Toffees, frustrated after another poor display against Wolves this past weekend, were keen to record a positive result against the defending champions.

Yet here, they found themselves fortunate to still be in the game after 20 minutes. Jordan Pickford misjudged the flight of David Silva’s corner delivery and was in no man’s land as the ball floated into the area.

Laporte, unmarked, rose highest to meet it but headed wide with the goal gaping at his mercy. His reaction said it all: his head in his hands, disbelief – knowing full well that opportunity could have proved.

Just minutes later, Ilkay Gundogan was cruelly denied his fifth league goal of the campaign. Silva was once again at the forefront, drilling a probing pass across the box with both the German and Sergio Aguero lurking in space. It fell to the midfielder, who hit the crossbar with his eventual effort before Everton hurried to clear.

City were hungry for goals and the home crowd could sense it. Constantly threatening down the flanks, particularly using Leroy Sane’s direct nature to pose problems, Jonjoe Kenny certainly needed more covering support from Theo Walcott ahead of him.

Everton’s first opportunity of note came on the half-hour mark, when coincidentally Walcott teed up Bernard with a good cross into the box. Kyle Walker made an important intervention, blocking the Brazilian’s headed effort, as it narrowly trickled beyond Ederson and out for a corner.

It showed just how quickly the hosts could threaten on the counter-attack themselves, after patiently biding their time and defending in numbers. Dominic Calvert-Lewin impressed, while Bernard and Walcott offered pace – if not a consistent final ball. 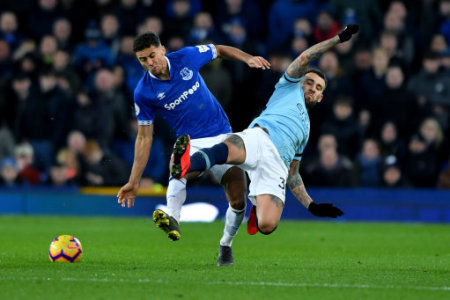 Calvert-Lewin was an ever-present threat for Everton on the counter, in a much improved display from their Wolves defeat. (Picture source: PA Images)

Spot-kick wrongly not given, but City eventually lead

City should have won a spot-kick after Andre Gomes’ tackle on a slaloming Gundogan went unpunished by referee Craig Pawson, but the visitors finally broken the deadlock in stoppage-time through Laporte – atoning for his earlier miss in style.

His compatriot, Kurt Zouma, wasn’t tight enough to him and Laporte’s power header flew beyond Pickford’s dive to open the scoring and completely change half-time team-talks for both sides.

Aguero’s acrobatic effort and a looping strike from substitute Raheem Sterling emphasised City’s urgency to score more. Then, two more substitutes combined to apply the finishing touch in the sixth minute of seven in stoppage-time.

Kevin de Bruyne spotted Jesus’ run, who attempted to chip an onrushing Pickford before calmly slotting into the net on the second attempt to apply the icing on the cake in a must-win game for Pep Guardiola’s men. 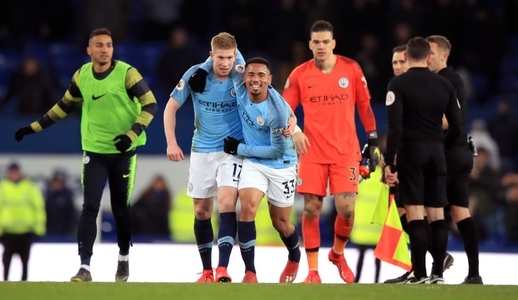 City are level on points with Liverpool but have a superior goal difference to the Reds – who now play Bournemouth, Bayern Munich and Manchester United in the next fortnight.