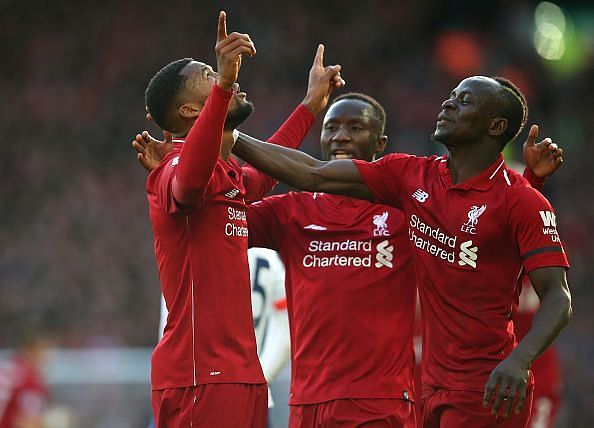 Liverpool returned to winning ways and top the Premier League once more after a 3-0 win vs. Bournemouth, but which players impressed while others struggled?

Liverpool restored their three-point gap ahead of defending champions Manchester City at the Premier League summit, with a comfortable 3-0 win over AFC Bournemouth.

Goals from Sadio Mane, Georginio Wijnaldum and Mohamed Salah’s 20th goal across all competitions this term ensured Jurgen Klopp’s men returned to winning ways after a 1-1 draw away at West Ham on Monday evening. This result also marks the first time in 35 years that Bournemouth have lost eight successive away games, a statistic Eddie Howe will not like the look of.

With a tricky Champions League last-16 tie against Bayern Munich up next, as well as a rejuvenuated Manchester United and the Merseyside Derby among their upcoming fixtures, the manner of the Reds’ latest victory will provide a morale boost.

Here’s a look at five hits and flops then, as Liverpool recorded their 20th league win of the campaign in commanding style: 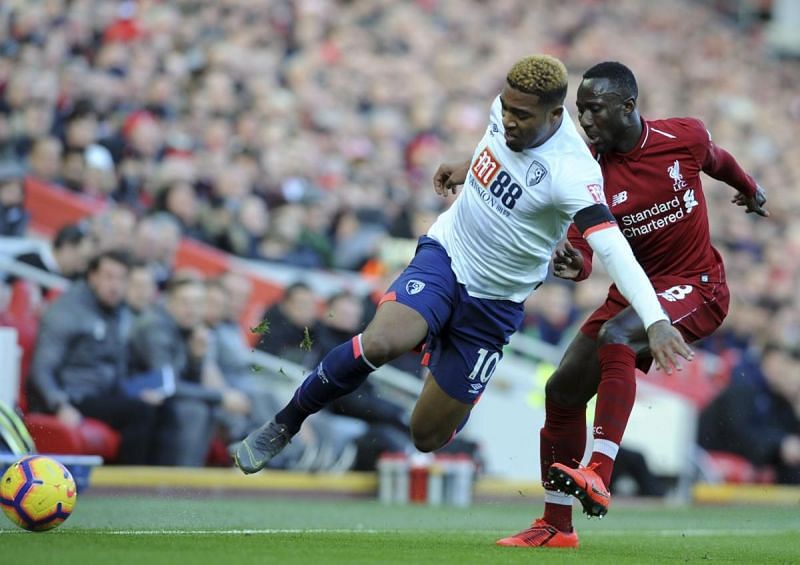 Ibe was ineffective against his former employers, dispossessed too often and failed to make a lasting impact

On another return to Merseyside for Jordon Ibe, it was a forgettable display for the 23-year-old. Despite making his first league start of 2019 alongside fullback Diego Rico, he flattered to deceive after a bright showing in the early exchanges and struggled to have a positive influence in attack.

After teeing up Ryan Fraser early on, the Scotland international saw his effort saved by Alisson – that was as good as it got in truth for Ibe from a creative perspective. Ultimately, he tried to do too much against his former employers and that was reiterated by his match statistics: two completed dribbles, fouled once, dispossessed four times, three unsuccessful touches. Only Sadio Mane (8) lost the ball more than Ibe’s seven – though the Englishman was replaced near the hour mark.

In games like these where half-chances and opportunities for sustained spells of possession are important, Ibe faltered. Replaced for a more direct goal threat in fellow ex-Red Dominic Solanke, the 21-year-old showed more going forward in half-an-hour compared to Ibe in twice the time.

He’s got bonafide quality but has been unable to display that ability regularly enough, which is one of the main reasons why he’s only played 422 Premier League minutes this term – compared to Fraser’s 2,126 for example.

You can see what consistent minutes, invaluable experience and an improved squad role has done for Fraser, but Ibe needs to earn that opportunity and performances like these are a barometer of his stagnation in recent seasons. With less than 18 months left on his existing deal, it’ll be interesting to see how he reacts after another disappointing display. For someone who was Bournemouth’s club-record signing three years ago, he’s not doing enough to justify an extension. 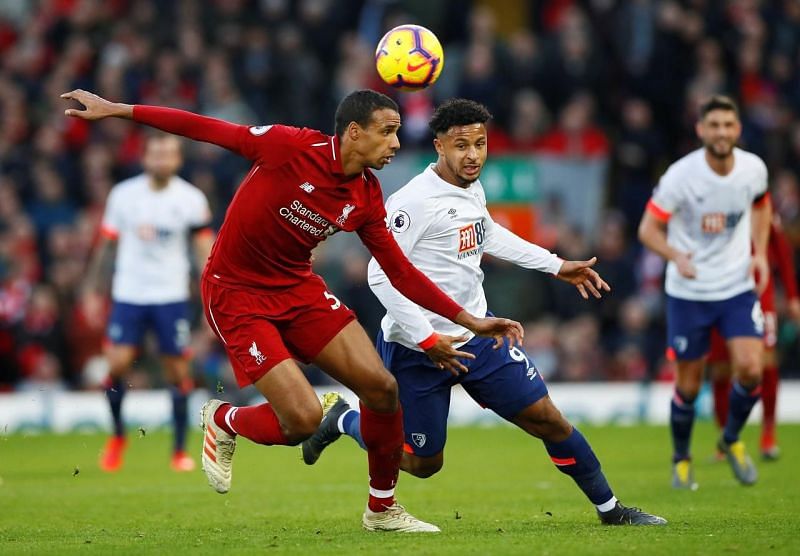 Matip was excellent in defence, as Liverpool had another clean sheet against an unpredictable Bournemouth

Could’ve given a spot in this list to Andrew Robertson, Sadio Mane, Naby Keita or a few other Liverpool players besides them. But considering all the praise Virgil van Dijk constantly gets, it’s important to acknowledge when he’s outshone by one of his defensive teammates.

On this occasion, it was Matip who excelled for the Reds on their way to a 14th clean sheet of the league campaign. The statistics support this too: a game-high 11 clearances, three tackles and aerial duels won, two interceptions, one key pass and 89% accuracy.

For all his weaknesses and negative tendencies in defence, you have to give credit where its due. He performed well and needed to, as the match could’ve been a completely different contest altogether had Bournemouth scored early on to capitalise on the hosts’ nervy start.

A good display from a player aware that now is as good a time as ever to try and cement your starting berth, given Joe Gomez and Dejan Lovren are both sidelined. The acid test will now be whether he can continue this momentum with tougher opposition to come, but it’s during times like this that it’s easy to forget they signed him for free two-and-a-half years ago! 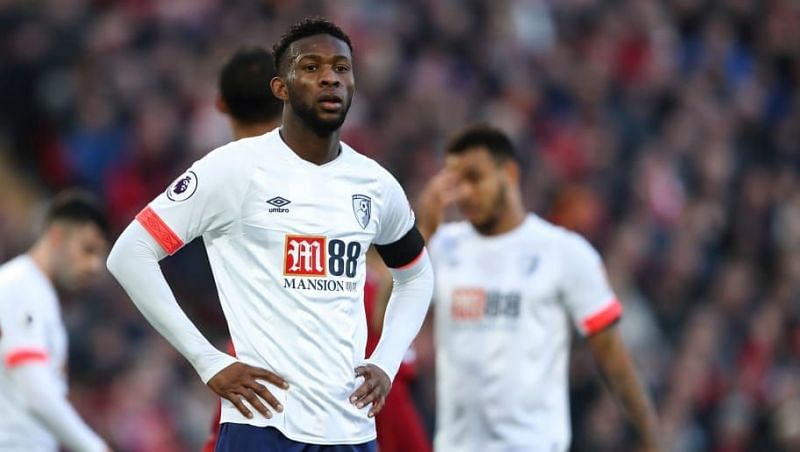 Only a handful of Bournemouth players emerge from this defeat with much credit – Jefferson Lerma isn’t one of them. Goalkeeper Artur Boruc, Rico and Fraser, who has developed into one of the Cherries’ most reliable attackers aside, there were not many positives to take from a disappointing display in truth.

Lerma, signed for £25m from La Liga side Levante last summer, has displayed his quality in flashes but ultimately it hasn’t been enough. Here again was no different: Liverpool controlled the midfield battles and although working in a three-man partnership alongside Andrew Surman and Daniel Gosling, the Colombian should’ve been more assertive and had a more impactful game than he did.

Yes, he was returning from an ankle injury but after passing a late fitness test, surely he would’ve been fit enough to perform at a good standard? Two interceptions, three clearances and no tackles completed in an away game against the league leaders – not good enough. His passing was good (90.9%), but he didn’t often pass forward or take many risks to create an opening, so that stat is insignificant.

What is worrying though, is that he was being bypassed too easily in transition and unsurprisingly found himself replaced for a more attacking change with less than 20 minutes to play. For someone the Cherries broke their club-record transfer fee on, he’s not been consistent enough and quickly earned a reputation for being card-happy too – already accumulating nine bookings in 20 appearances this season.

Liverpool is exactly the type of team you’d expect him to shine against, as a 24-year-old eager to prove himself against the league’s best. Instead, he was one of three outfield players – Steve Cook and the aforementioned Ibe – who didn’t complete a tackle for the visitors. Insufficient. 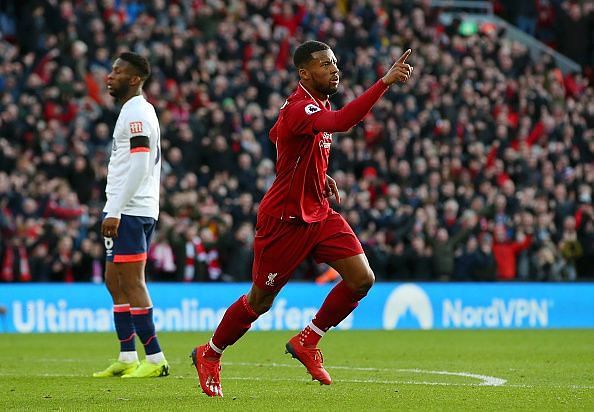 Wijnaldum impressed throughout as Liverpool cruised to an important home win

Just like Lerma, Wijnaldum could count himself fortunate to have even been playing after Klopp revealed he has been struggling with an illness this week.

He gets a lot of criticism for inconsistent performances, particularly as there are often periods in games where he’s anonymous or displays poor decision-making in possession. Here, that was not the case whatsoever. All-action, he was constantly on the move trying to stretch the visitors whenever Liverpool advanced forward from midfield and the Dutchman looked to constantly frustrate them.

Three key passes, 90.9% pass accuracy, 54 touches, he crucially combined with Robertson to double Liverpool’s lead with a brilliant finish, dinking over Boruc with aplomb. It was precisely the type of performance Liverpool fans want to see more from him, particularly against the better sides.

Confident in possession, assured on the ball and the defensive influence of both Keita and Fabinho – who combined for 11 tackles and three interceptions – allowed him the freedom to roam forward more than he has done at times.

Ultimately, he’s not a central midfielder but with Liverpool’s attacking depth, he cannot be the creator-in-chief he once was at Newcastle. Where he was playing on this occasion though, provides him a better opportunity to shine with less defensive responsibility and more freedom to create. 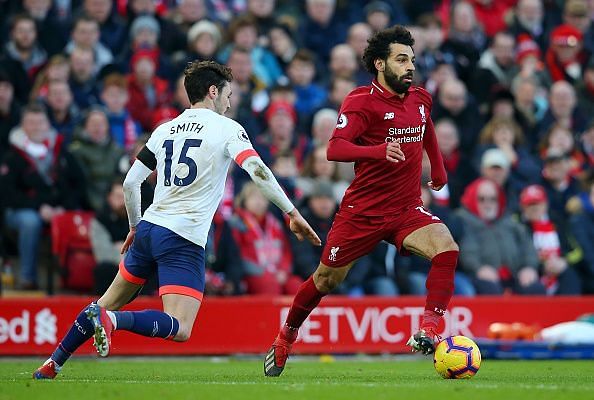 Salah was a constant threat as usual, netting his 20th goal of the campaign across all competitions

Salah returns with another Man of the Match display! After disappointing individual outings against Leicester and West Ham, Salah returned to the type of form we’ve been used to seeing over the past 18 months – a forward hungry for goals and eager to create chances aplenty, causing havoc for opposition defenders to deal with.

He scored the hosts’ third goal to cap off a brilliant counter-attacking move. Keita, Mane and Roberto Firmino were all involved before the Brazilian teed him up with a deft backheel flick into his path. Making no mistake to slot into the bottom corner, it means he’s now netted 20 goals this season across all competitions. Not bad.

It was a composed finish and the type that we tend to gloss over, particularly as Liverpool’s attacking trident receives praise aplenty for their deadly creative threat. Firmino and Mane both squandered promising opportunities, which emphasised just how difficult it can be to score those chances.

Salah worked hard throughout, whether that be creating chances for teammates or looking to convert them himself. At times this season, we’ve seen him be more selfish to the detriment of his teammates – that wasn’t the case this time around. Eventually getting his goal, he worked tirelessly to help set the precedent, pressing Bournemouth defenders into mistakes in possession from the front and alleviating pressure on other teammates by doing so.

He forced Boruc into an excellent save, tipping his half-volley over the crossbar in the first-half after some impressive improvisation, while the stats proved he’s hungry to score more goals too: two dribbles, three key passes and seven shots registered!