Sergio Aguero’s record-equalling hat-trick, two more goals from Raheem Sterling and another by Ilkay Gundogan saw Manchester City ease to a dominant 6-0 thrashing vs. a limp Chelsea side.

The result propels City back to top spot while inflicting Chelsea’s record worst league defeat, having conceded four goals in the first-half of a top-flight fixture for the first time since December 1999 among other grim records.

Sergio Aguero was unsurprisingly at the forefront once more for a rampant City side – who made three changes to the eleven that started their 2-0 win over Everton in midweek.

Raheem Sterling opened the scoring after four minutes following some poor man-marking and a touch of fortune saw Bernardo Silva’s pass deflect across goal. He made no mistake, latching onto the ball and firing into the bottom corner. 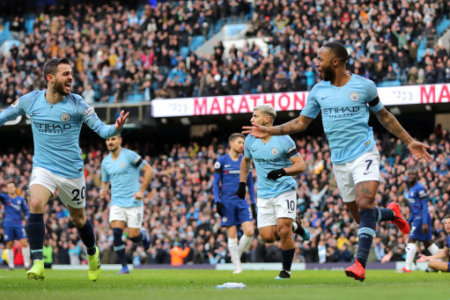 Silva’s guile and determination was on full display as he danced his way into, and away from, the visitors’ box. Firing low and across the box for Aguero to convert, the Argentine surprisingly squandered an open goal opportunity and watched his cushioned effort hit the side netting.

Untroubled by his earlier miss, Aguero atoned for it in emphatic style after 13 minutes. After Oleksandr Zinchenko skipped past two challenges before teeing him up, he advanced beyond Jorginho and Antonio Rudiger before letting fly. Despite Kepa Arrizabalaga’s best efforts, it flew towards the top corner with aplomb and Chelsea’s day was rapidly worsening. 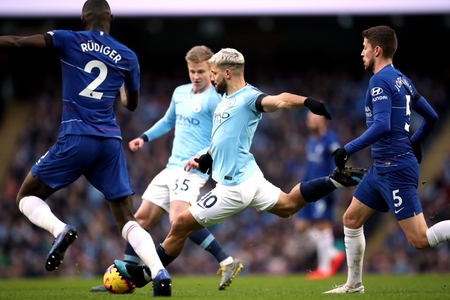 Aguero added his second of the game after 19 minutes, profiting after a poor Ross Barkley backward header which inadvertently set him up from close-range. 3-0 up and 20 minutes hadn’t even passed yet, Chelsea looked threatening in attack but defensively, were at sea. Pedro and Gonzalo Higuain both tested Ederson with efforts before the interval, but City eased into the break with a four-goal cushion.

Gundogan, who hit the woodwork against Everton in midweek, netted his fifth league goal of the campaign. It marked a personal high for the German – though there were questions asked whether Kepa should have saved his low effort. Ilkay’s strike also marked the first time Chelsea had conceded four in consecutive top-flight matches since December 1990.

Chelsea found themselves seriously overrun in midfield against a City side coasting through stages of the first-half. With Leroy Sane, Riyad Mahrez and Gabriel Jesus among the hosts’ substitutes – the scoreline appeared ominously low ahead of the restart.

Sarri did the typical thing: a brief teamtalk, sending his players out early. It didn’t have the desired effect. Mateo Kovacic replaced Barkley, minutes before captain Cesar Azpilicueta was penalised for hauling down Sterling inside the box.

Aguero made no mistake from 12 yards, sending Kepa the wrong way to slot home his hat-trick and equal Alan Shearer’s record 11 league trebles. He was given a hero’s reception as usual when replaced after 65 minutes for Jesus, after becoming City’s all-time record goalscorer. You can only wonder just how many more he’d have scored, if he wasn’t so injury-prone.

Sterling, influential throughout, completed his brace for the afternoon with a composed close-range finish. The move was created by substitute David Silva, whose eye-of-the-needle pass teed up Zinchenko down the left. His delivery fell to Sterling’s path, who netted goal 12 for the campaign after 80 minutes.

Chelsea drop to sixth place on goal difference below Arsenal who won 2-1 at Huddersfield yesterday, while Manchester United’s 3-0 win at Fulham means they currently finish the top-four.