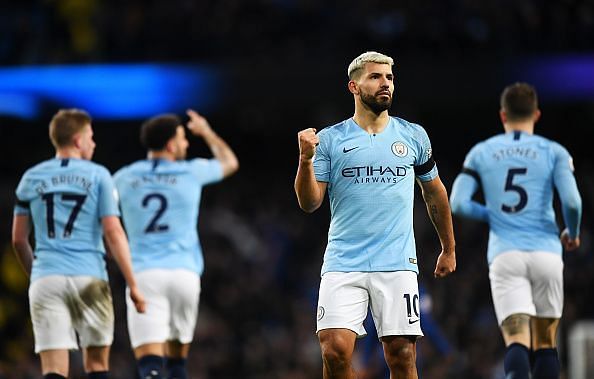 Manchester City’s emphatic 6-0 thrashing vs. Chelsea saw them return to top spot in the Premier League, but which players impressed while others struggled?

Sergio Aguero‘s record-equaling hat-trick, two more goals from Raheem Sterling and another by Ilkay Gundogan saw Manchester City ease to a dominant 6-0 thrashing against Maurizio Sarri’s limp Chelseaside – who are under further pressure after disappointing results of late.

The result propels Pep Guardiola and City back to the Premier League‘s top spot after Liverpool’s win on Saturday while inflicting Chelsea’s record worst league defeat ever, having conceded four goals in the first half of a top-flight fixture for the first time since December 1999 among other ominous records which suggest there are problems aplenty for the Blues to ponder in west London.

With the UEFA Europa League returning this Thursday, as well as important cup fixtures against both Manchester clubs and a home league clash with Tottenham to come before March, it’ll be interesting to see how the visitors react.

City oozed class and after a recent hiccup at St. James Park, proved once again why they’re defending champions and are relishing Liverpool’s title challenge this year. With all of that in mind, here’s a look at five hits and flops from an emphatic City victory: 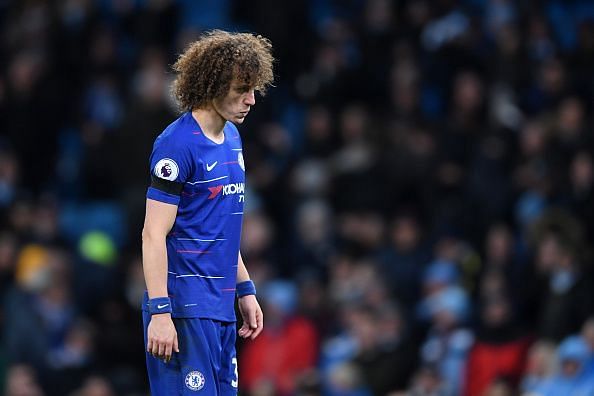 There were a few Chelsea players, unsurprisingly, in contention for a spot among the flops today. Ross Barkley didn’t cover himself in glory before being replaced early in the second half, while goalkeeper Kepa Arrizabalaga should’ve done better to save a few of City’s six goals over the 90 minutes.

Cesar Azpilicueta, Mr Reliable, was not so and conceded a spot-kick after hauling down Sterling – but the Spaniard still delivered more of a defensive shift at right-back than Luiz in the heart of Chelsea’s backline.

Luiz, whose lapses in concentration and inability to tackle with much conviction are alarming, was truly exposed on this occasion. City was rampant from minute one and their counter-attacking brilliance proved too much for Chelsea to handle, though Luiz, in particular, should have done better to stop them easing their way into the final third whenever they pleased.

Bernardo Silva’s cross took a wicked deflection off him into Sterling’s path for City’s first goal. If he was alert to the danger and actually went to pressure the winger, rather than jockey, the ball probably would have been cut out altogether or spun away from goal instead.

There was nothing he could really do about goals three and four, but for Aguero’s first goal again, he lacked urgency to defend or help support his teammates. Instead, he watched Aguero strike beyond Rudiger’s best efforts on the edge of the box, as opposed to helping make it more difficult – or better yet – attempting to block the shot.

He let substitute Gabriel Jesus get the better of him too easily and was arguably fortunate not to have given away a spot-kick himself after a blatant push on his compatriot, to distract him from shooting.

As for goal number six, Luiz was once again caught ball-watching. He was alongside Raheem before Oleksandr Zinchenko whipped the ball in, but let the winger evade his attentions and rifle home from close-range, seemingly perplexed as to how the ball got to him. 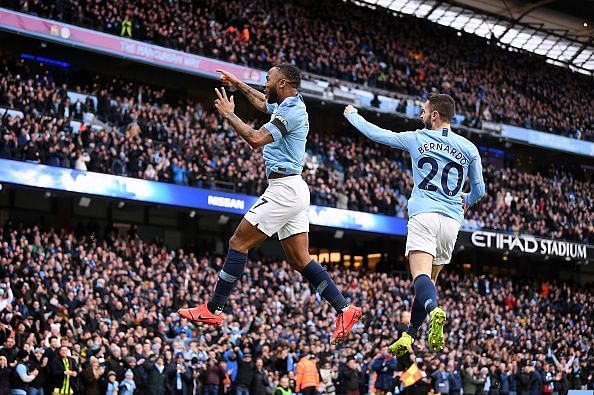 Super Sunday for Sterling and Silva

Relentless energy, guile, passing range, technical ability: Bernardo Silva has it all. The 24-year-old, who didn’t score nor assist here, should feel frustrated that he didn’t earn at least one goal contribution to his name.

He proved pivotal in the build-up for Sterling’s first goal, teed up Aguero before the Argentine’s glaring open goal miss and was a constant pain for Chelsea to deal with.

Two tackles, interceptions and four clearances from the right-hand side of a three-pronged attack, is near unheard of. Unfazed, he did a great job of isolating Eden Hazard and delivered the type of unselfish, priceless display that Pep longs for.

Excellent in transition and a defensive nuisance out of possession, he did the things that rarely show up in match statistics but can help lift supporters off their feet – infectious pressing, ball recoveries aplenty and unafraid to display his technical quality where possible.

It’s why Bernardo has made a seamless transition after staggered minutes last term – reliable and ever-present in midfield under Pep, he’s only missed one league game and started 23 to date in 2018/19. Critics continue to herald Fernandinho and how much his presence is missed when unavailable, but Silva continues developing into a dependable performer and long may it continue. 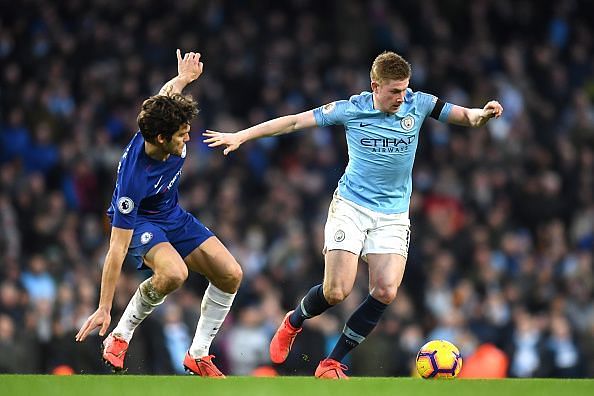 When a player is out-of-form and they’re up against the league’s best attack, things don’t usually tend to go in their favour. Alonso experienced that during another poor display by the Spaniard, who this season has endured criticism aplenty for his lacklustre defensive showings.

This one, was no different. Even after five minutes, you knew it was going to be a difficult afternoon for the left-back, who was nowhere to be seen during the build-up to Sterling’s opener. No wonder it looked so easy!

He tucked in alongside Luiz, as opposed to sticking out wide and tracking an unmarked Silva. He appeared to tell Hazard infront of him to mark the Portuguese international instead, but why? It was only Aguero and Gundogan on the edge of the box – in a 2v4 situation, so why did he feel the urge to follow and vacate his position?

It was an indefensible move on Alonso’s part, especially as Kevin de Bruyne spotted him abandoning his position and the gap so quickly that he set Silva through with an opportunity to create their first goal.

There was nothing he could’ve done to stop Aguero’s first or Gundogan’s drilled effort before the break. However, his involvement in City’s third goal too was questionable at best. Inches away from the ball, he stood and watched as John Stones towered above Antonio Rudiger – which created the opportunity for Chelsea to struggle clearing their lines and Barkley’s header ultimately was capitalised upon.

Speaks volumes that he was replaced after 73 minutes with Emerson making hsi fourth appearance of 2019. Following this dismal display, the 24-year-old Italian should expect more opportunities to prove his worth. 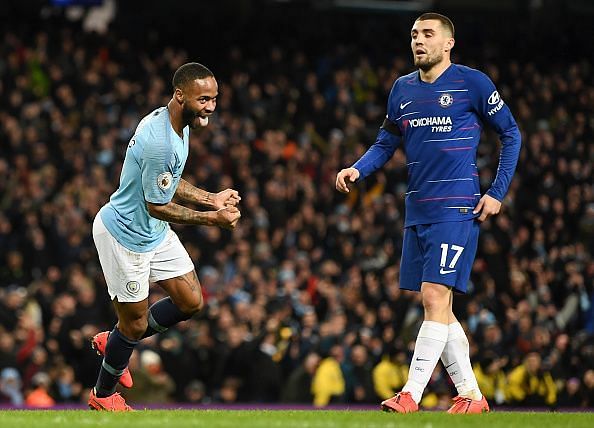 Sterling excelled, scoring two and assisting one as City eased to an emphatic win

Enjoyed a blistering start as City began quickly, with the 24-year-old breaking the deadlock after four minutes. The fortuitous manner of his first goal was clear to see – Silva’s deflected delivery trickled toward an empty area inside the box, although he still had ground to cover and was rewarded for some intelligent attacking movement.

He made no mistake on that occasion, while persisting to torment Chelsea captain Azpilicueta with his continuous surging runs down the left-hand side and centre whenever City broke with speed.

Sterling, constantly criticised for his end product, has now scored 12 and created 11 assists in 24 league games this term. To put that into context, last season was Raheem’s career best to date – he scored 18 and created 15 more in 33 league matches.

It’s clear that the arrival of £60m Riyad Mahrez and threat of more competition for places has only benefited his progression, as the Citizens continue to enjoy the Englishman’s development first-hand. 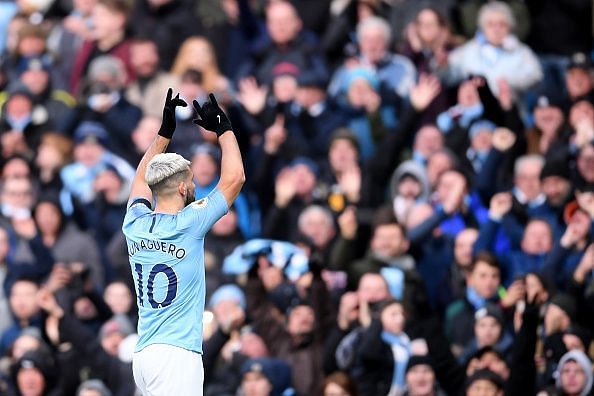 Aguero celebrates one of his goals, during another memorable display from the world-class Argentine

After missing a great chance to double City’s lead early on – firing wide with an open goal gaping – lesser strikers would have let that affect them throughout, in a match where the hosts dominated.

Instead, it proved precisely the motivation Sergio Aguero needed to not only respond with a goal, but score his second hat-trick in seven days. As a result, he’s equalled Alan Shearer’s record for most Premier League hat-tricks (11) while surpassing Eric Brook (158) as City’s top goalscorer in England’s top-flight.

His first strike of the afternoon came from virtually nothing: Zinchenko’s mazy run set him up as he danced beyond two challenges and let fly from range with Rudiger baring down on him.

As for his second, he had Ross Barkley to thank. The midfielder inadvertently headed the ball back goalwards as Chelsea failed to clear their lines and just outside the six-yard box with only Kepa to beat, he didn’t hesitate.

He then applied the finishing touch once more, this time in the second-half, after Azpilicueta hauled down Sterling. Sending Kepa the wrong way to coolly slot home, he completed his hat-trick in style before earning a rest and the matchball at full-time.

Six shots, three on target, three goals. Two dribbles completed, two aerial duels won and on another day, he would have had five or six – hitting the crossbar after leaping above David Luiz while his glaring miss was duly rectified. Frightening statistics from one of the world’s best, who knows what we could’ve witnessed if he wasn’t so injury-prone?