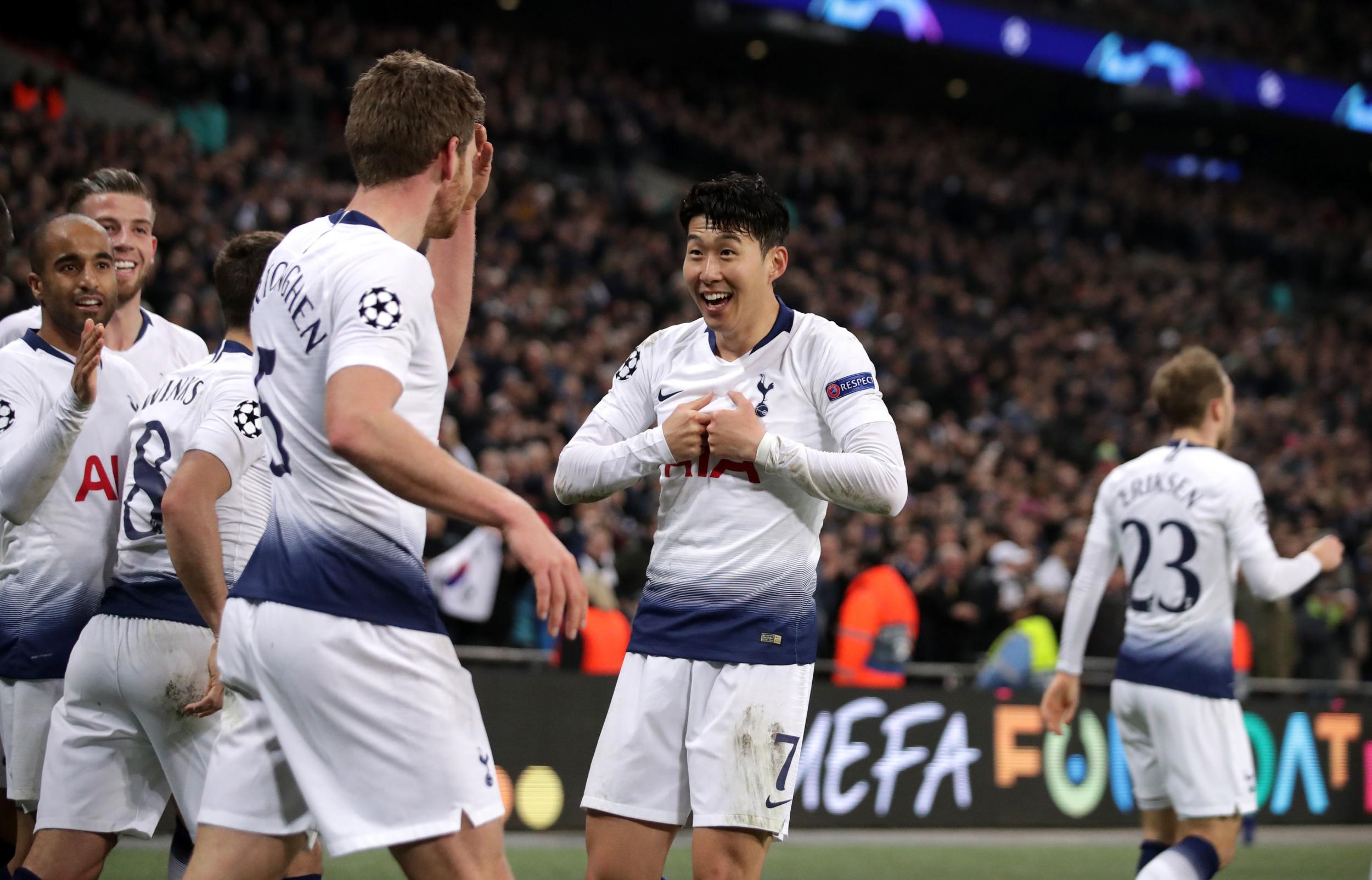 Goals from Heung Min-Son, Jan Vertonghen and substitute Fernando Llorente saw Mauricio Pochettino’s men earn a valuable win vs. a tricky Borussia Dortmund side at Wembley. The result sees Spurs are in real control with the second-leg tie to come on March 5.

Tottenham firmly have one foot in this season’s Champions League quarter-finals, after a convincing 3-0 win over Borussia Dortmund at Wembley. Son’s first-time volley after a fantastic delivery by marauding wing-back Jan Vertonghen saw the hosts break the deadlock just a minute after the restart, following an intriguing first-half.

Despite a first-half where Lucien Favre’s side looked the more threatening and could’ve netted a crucial away goal, Mauricio Pochettino responded with a tactical tweak which proved pivotal as Spurs ultimately prevailed.

Jadon Sancho in particular was a constant threat for Dortmund during an action-packed first-half. The 18-year-old winger, who Tottenham – among others – tried to sign after his transfer request at Manchester City was made public in 2017, looked to dazzle and thrill fans at Wembley with close-control dribbling, electric pace and urgency in the final third. 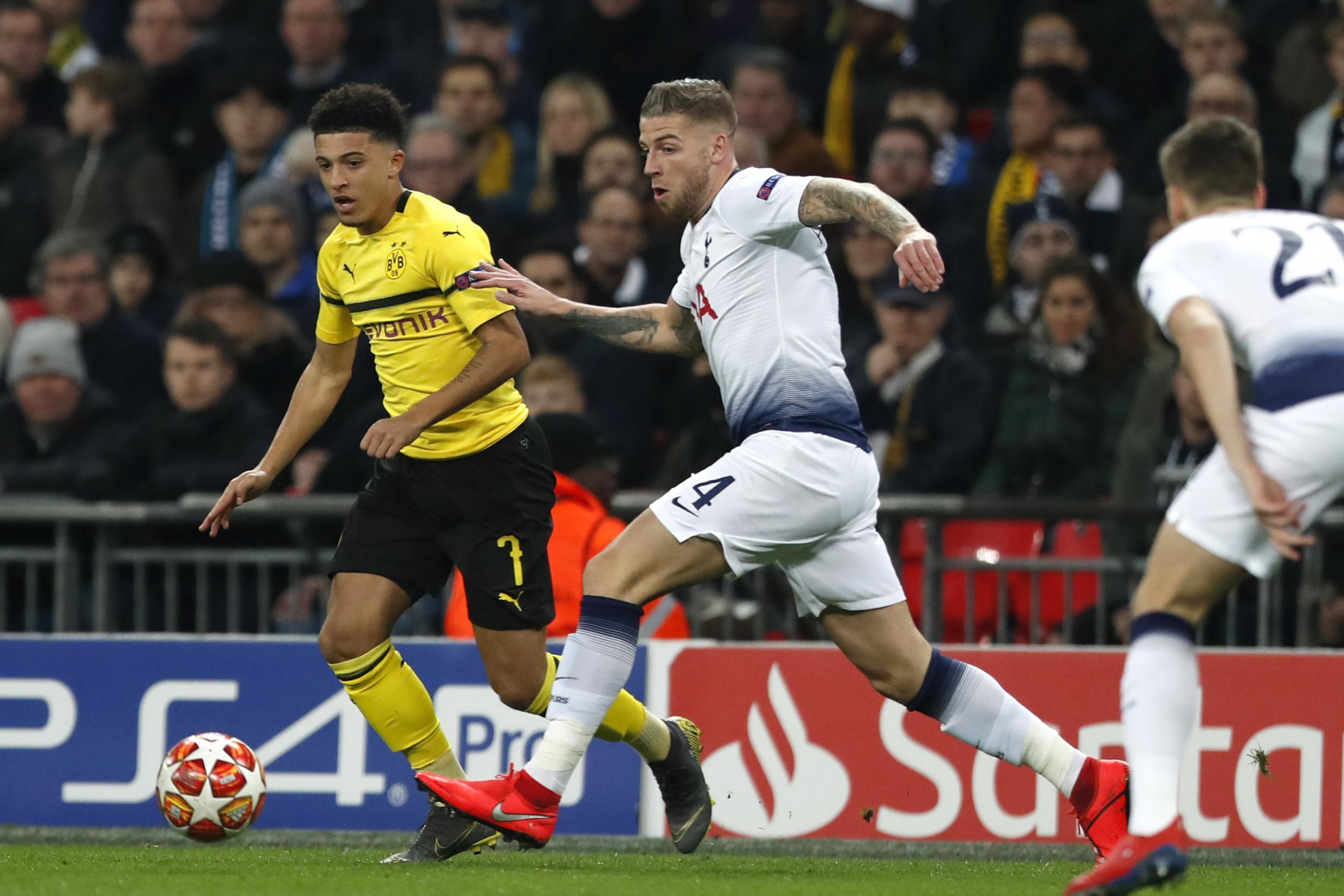 Jadon Sancho (no.7, far left) impressed in the first-half, but Tottenham made sure to double up on the talented teen after the break. (Picture source: Independent)

Midfielder Thomas Delaney forced Hugo Lloris into a save from distance, before young defender Dan-Axel Zagadou saw his header clawed away to safety by the World Cup winner in first-half stoppage time.

It wasn’t as though Tottenham didn’t create chances of their own, as Lucas Moura watched his sweet strike cannon off the far post after seven minutes. Christian Eriksen and Son looked to create chances where possible, but it was the latter’s intelligent run which proved decisive after 47 minutes.

Spinning Zagadou to give himself a yard of space, the Frenchman missed his opportunity to head clear. Son met Vertonghen’s delivery with composure and precision to side-foot home beyond a helpless Roman Burki. 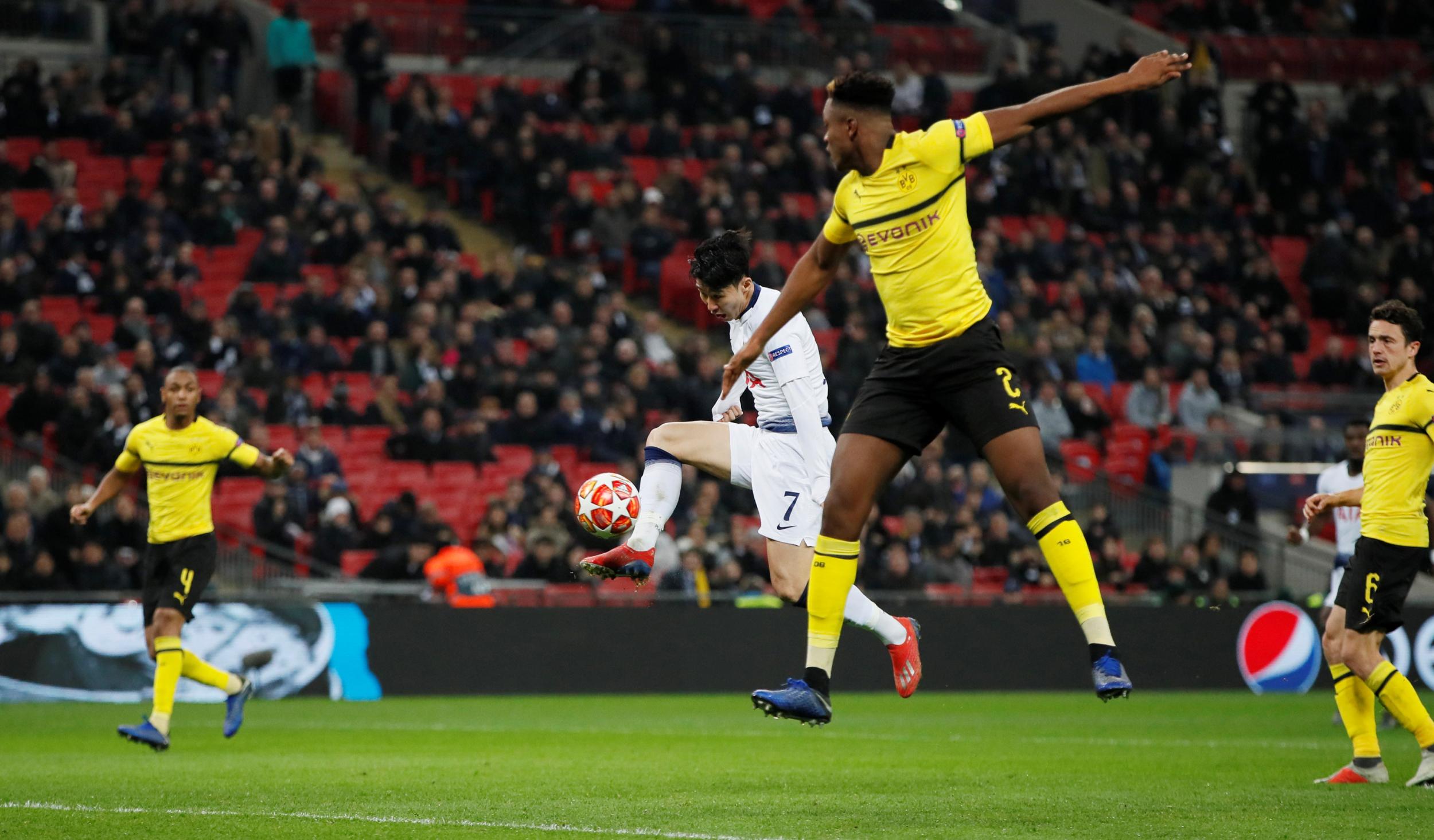 Son broke the deadlock – scoring his first Champions League goal of the season in the process. (Picture: Independent)

Buoyed by their fast start to the second-half, Spurs went in search of more goals. Zagadou was called into action again, this time making an important last-ditch intervention after quick thinking from Toby Alderweireld.

Toby’s quick-thinking teed up the run of Eriksen, who swung in a dangerous delivery which had to be dealt with. Alderweireld then came close with a headed effort from Eriksen’s resulting corner, before Omer Toprak made a vital sliding clearance as Lucas lurked just behind him.

Moussa Sissoko’s typical marauding runs forward were causing all sorts of problems and after a fizzing low ball almost teed up Moura, Spurs could smell blood. Dortmund, who struggled to deal with Tottenham’s tactical change to a back-five out of possession, seemed content at 1-0.

Vertonghen – Tottenham’s best player – continued to probe with driving runs down the left-hand side. Achraf Hakimi was struggling to deal with the experienced Belgian and soon enough, Spurs doubled their lead.

Serge Aurier’s lofted ball was asking for someone to attack it. Vertonghen did precisely that, leaving Hakimi for dead before latching onto it and finishing with efficiency. 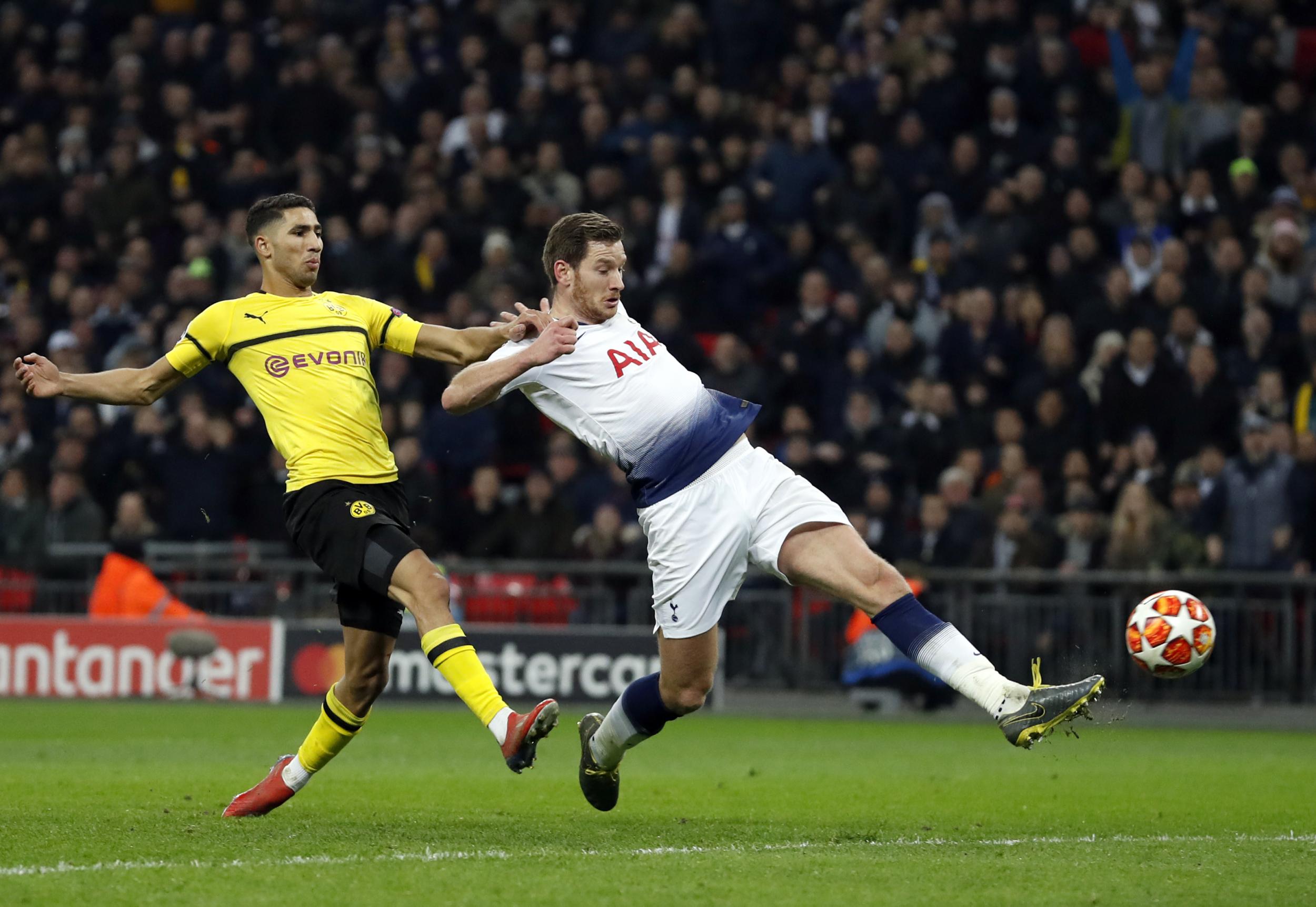 His first Champions League goal of his career capped off an excellent individual showing, but there was still more yet.

Llorente replaced Lucas with time ticking down and made an instant impact too. Eriksen’s inviting corner was met by the Spaniard, who evaded the attentions of Abdou Diallo at the near post before heading goalwards. 3-0 up and comfortable, Tottenham celebrated a memorable victory against a tricky Dortmund side. 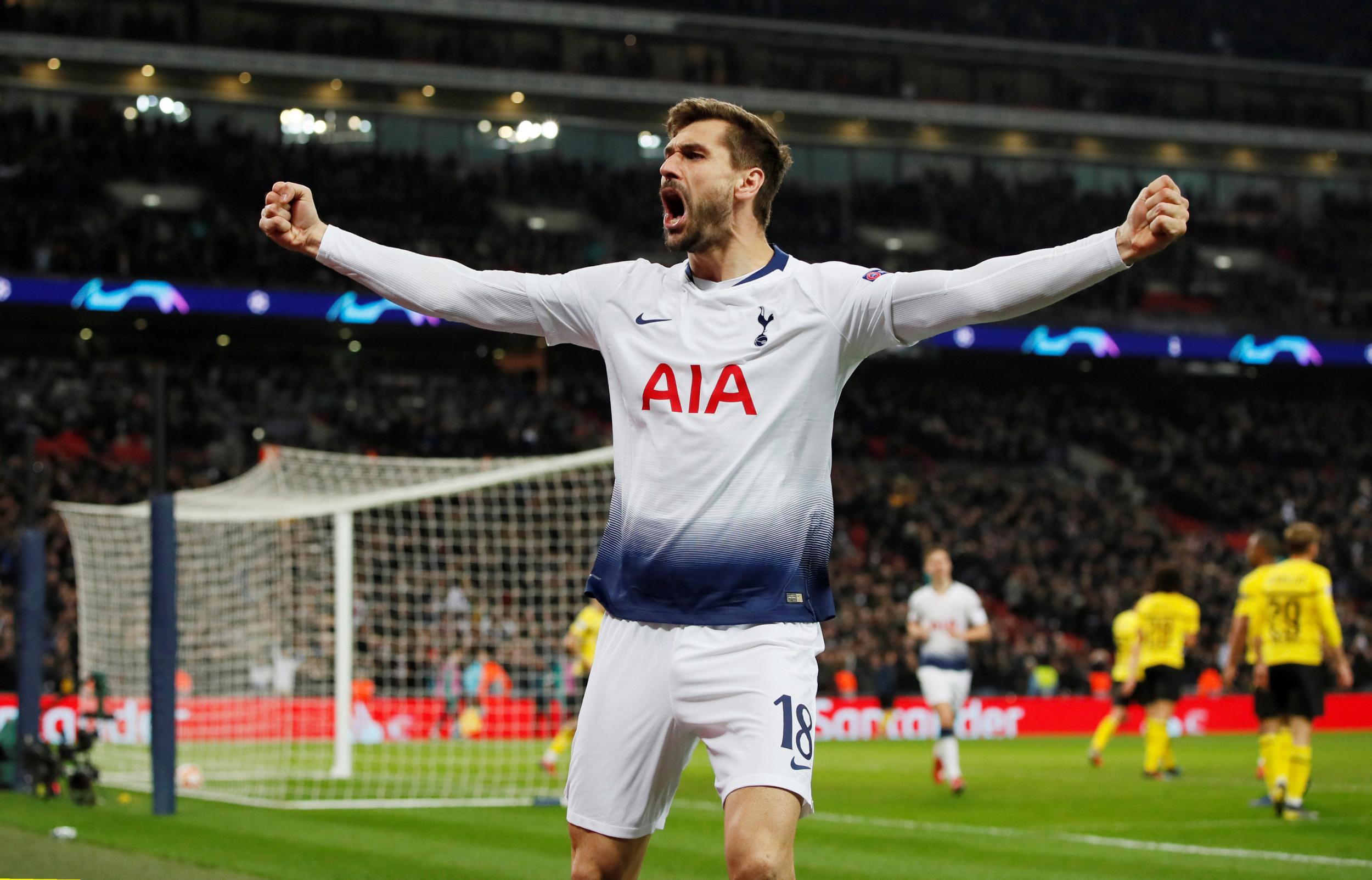 Llorente made an instant impact, heading home from Eriksen’s corner to give Spurs a commanding lead in the tie.

No-one would’ve predicted the scoreline at half-time, especially given how vulnerable Spurs looked on the counter-attack with their defensive shape. Pochettino making Aurier and Vertonghen tuck in and create a back-five out of possession stifled Dortmund’s attacking prowess. Meanwhile, it provided the creative width the hosts were looking for themselves.

Overrun and overwhelmed, it’ll be a mountain for the Bundesliga leaders to climb in early March. A three-goal deficit, no away goals in their favour and a missed opportunity with the likes of Julian Weigl, Paco Alcacer and captain Marco Reus all injured, their Champions League hopes for another season seem all but over.