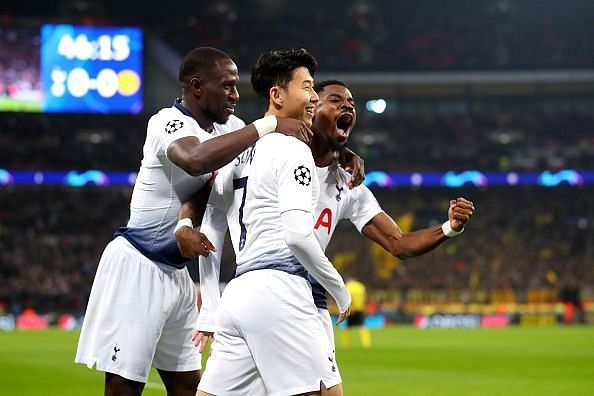 Tottenham earned a valuable first-leg advantage with a 3-0 win vs. Borussia Dortmund, but which players struggled while others impressed under the bright lights at Wembley?

Second-half goals from Heung Min-Son, Jan Vertonghen and substitute Fernando Llorente saw Tottenham earn a commanding first-leg advantage against a tricky Borussia Dortmund side in their Champions League last-16 tie at Wembley. The result sees Mauricio Pochettino’s men in real control, with the second leg tie to come in Germany on March 5.

Son’s first-time volley after a fantastic delivery by marauding wing-back Jan Vertonghen saw the hosts break the deadlock just a minute after the restart, following an intriguing first-half where Lucas Moura and Dan-Axel Zagadou both came close for their respective sides.

Despite enduring a first-half where the Bundesliga leaders appeared the more threatening for large periods and could’ve netted a crucial away goal if not for Hugo Lloris, Spurs responded well after Pochettino’s tactical tweak proved pivotal in their fast start after the break and eventual confident victory.

With that all in mind, here’s a look at five hits and flops from Tottenham’s morale-boosting victory on Wednesday evening: 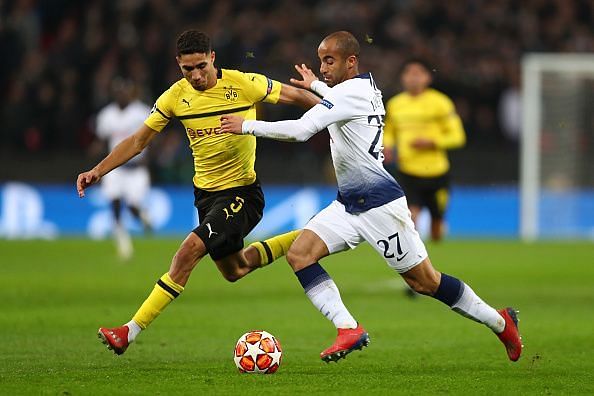 Hakimi had his moments, but ultimately failed to remain alert for two of Spurs’ goals

Achraf Hakimi has enjoyed an excellent season with Dortmund to date, on-loan from Real Madrid. A consistent and reliable performer, Wednesday highlighted the key areas for improvement that he’ll need to address sooner rather than later, if he’s to assert himself as one of Europe’s best fullbacks in the coming years.

Seen as a potential weakness by Tottenham, he found himself being physically overpowered by someone bigger, stronger and more experienced in the hosts’ Jan Vertonghen. It’s not good enough an excuse to make though, as the Morocco international should have done more to limit the 31-year-old’s impact – especially as Jan’s not a left-sided winger either.

Whether that be to command more defensive support from Jadon Sancho further forward, or better yet, to commit a tactical foul and shoo him away instead of inviting him to constantly maraud his way, he didn’t provide the visitors with much confidence in possession and looked vulnerable at times.

Although a quick player, he was slow and appeared sloppy at times when it came to loose balls. In games like these, teams are always going to prey on every subtle weakness and Spurs could sense he was uncomfortable with the physical mismatch, so Vertonghen persisted to overload that side of the pitch.

For Son’s strike, he shouldn’t have let Vertonghen whip his delivery in. Easier said than done, he lost possession so cheaply in his own half to begin with – then virtually watched him cross it in.

Vertonghen’s goal, is about spatial awareness. He was alongside the Belgian but found himself left behind as Serge Aurier launched a lofted ball into the box, which the versatile defender was more than happy to slot home.

The manner of their defeat will prove an invaluable experience for Dortmund’s young core as they’re very talented but found themselves outworked and ultimately overrun against a Tottenham side with a comfortable advantage ahead of next month’s return leg. 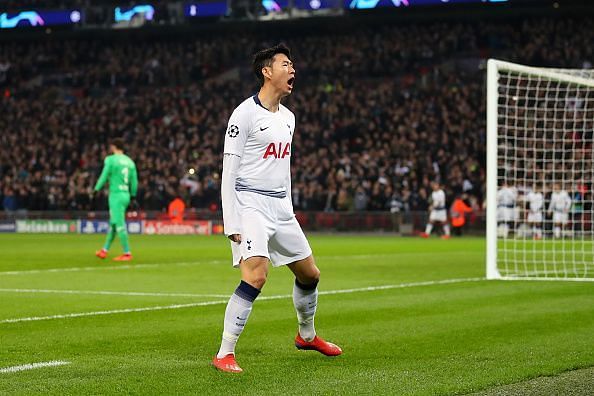 Son celebrates his first Champions League goal of the 2018/19 campaign, to break the deadlock

Son unsurprisingly received a hero’s reception after being replaced late on here and after netting his 16th goal (all comps) this season, he deserved it.

His infectious attitude to pressing opponents in possession was on display again, while he threatened at times in a first-half where Dortmund were in the ascendancy. Excellent attacking movement throughout meant it’d only be a matter of time before his teammates created an opportunity for him and when it came, he made no mistake.

Leaving Zagadou for dead with a subtle sidestep to create space allowed him to finish with aplomb, side-footing beyond a helpless Roman Burki to break the deadlock. It was a difficult strike to hit as sweetly as he did, which is testament to his quality and developed finishing touch over the past year. Vertonghen’s excellent delivery meant he simply could not miss.

His 31 touches was a game-low but highlighted the fact he didn’t constantly need the ball at his feet to create, nor score chances. 85.7% pass accuracy was a game-high for forwards – barring Dortmund’s Christian Pulisic – while he was a nuisance for the visitors to constantly keep tabs on. 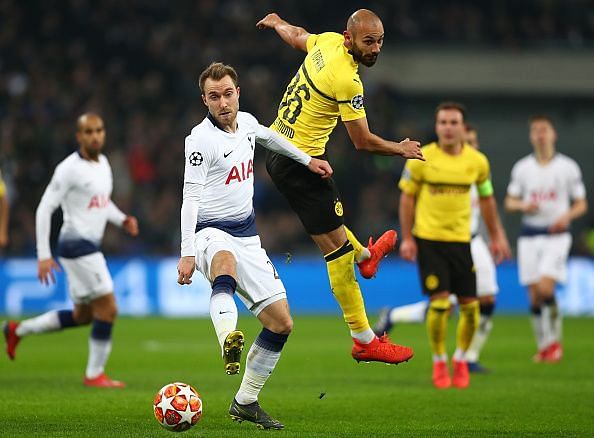 The plaudits will go the way of Vertonghen and Son, but Eriksen’s influence cannot be understated either

Critics continue to lavish praise upon Heung-Min Son and wax lyrical about just how under-appreciated the South Korean forward is. But a prime example of a key player who often does go under the radar, is Christian Eriksen.

On this occasion, like many before, he was quietly brilliant. Always eager to get on the ball, driving his team forward, it was another accomplished display from the Dane – who worked hard in different areas of the pitch, created good chances for teammates and did his utmost to breach Dortmund’s backline.

Although he appeared isolated at times, Eriksen was subtle in trying to find the killer pass and proved unafraid to adapt, trying different things if his first option wasn’t working. A perfect example of that was his quick thinking which prompted Vertonghen to hit a lofted through ball down-the-line. If not for an important intervention from Zagadou, Lucas Moura – lurking inside the box – would’ve probably scored.

He finally earned his assist, number 12 for the season, after fizzing an excellent cross into the box for substitute Llorente to head home at the front post. Everyone is aware of Eriksen’s capability as a set-piece specialist so the quality of his delivery isn’t surprising, but that’s the thing: we take it for granted.

In important games like these, you need your best players to step up. Harry Kane and Dele Alli both injured, no problem. He was it! 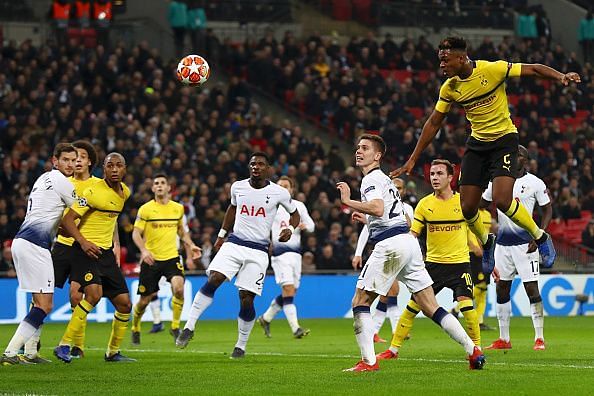 We’re all aware that big moments in matches can often change the complexity of hotly-contested matches within an instant. Dan-Axel Zagadou, 19, will need to learn from a memorable – but certainly not positive – experience at Wembley, where he was ultimately exposed by a ruthless Tottenham side in the second-half.

Before then, he squandered a great opportunity to gift Dortmund the lead in stoppage-time. It would have provided them a crucial away goal at least, but alas, the Frenchman’s headed effort was saved by compatriot Lloris.

Sancho’s delightful ball was perfectly-weighted for him to meet, with Juan Foyth alongside him. However the young Argentine did enough to stifle Zagadou’s effort enough and take some of the pace off his eventual strike.

He was the only defensive-minded player for both sides not to record a completed tackle and crucially failed to clear his lines moments before Son opened the scoring. If you watch the replay, you’ll see that he gave the South Korean a yard of space behind him to exploit, rather than trying to track him tighter and keep alongside him. He missed the attempted header and Son proved the beneficiary after Vertonghen’s fantastic cross.

At such a crucial point, so early into the second-half, it set the tone for the remainder of this game. Spurs could smell blood and knew their opponents were there for the taking, particularly given how unconvincing Zagadou looked at times in central defence. You could certainly tell that this was his first start since early December. 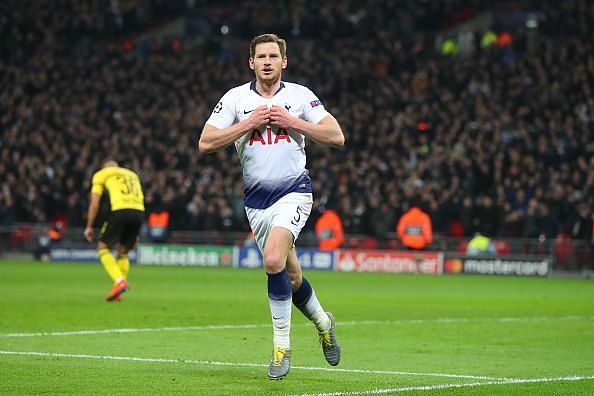 You need to be confident, composed and concentrated throughout when playing against a deadly counter-attacking side like Dortmund. They pose multiple quality outlets in the final third, as well as incision with Mahmoud Dahoud and Mario Gotze. Jan Vertonghen did his job and so much more besides.

Although it initially appeared like the Belgian was a vulnerable weak link in a first-half where the likes of Sancho and Pulisic looked to get in-behind at will, Pochettino’s tactical tweak to a back-five out of possession stifled Dortmund’s attacking capabilities after the break. In addition, it provided the hosts with creative width and options they were looking for themselves.

He essentially bullied Hakimi down the left-hand side and persisted to create an overload alongside Eriksen as Sancho rarely tracked back to offer defensive support. His delivery into Son’s path was fantastic and a cross that will be replayed over and over again. You could argue the pass was better than the goal itself, something Son echoed during his post-match interview.

Leaving Hakimi in his wake to double Spurs’ lead, he latched onto Serge Aurier’s lofted ball in the box and converted from close-range to score his first Champions League goal after 26 appearances in the competition.

What a time to get it. It hasn’t been a great season for him but with tough fixtures coming thick-and-fast, it’ll be a welcome morale boost and reiterates the fact Tottenham have another dependable figure to rely on when the chips are down, in a match of such magnitude no less.