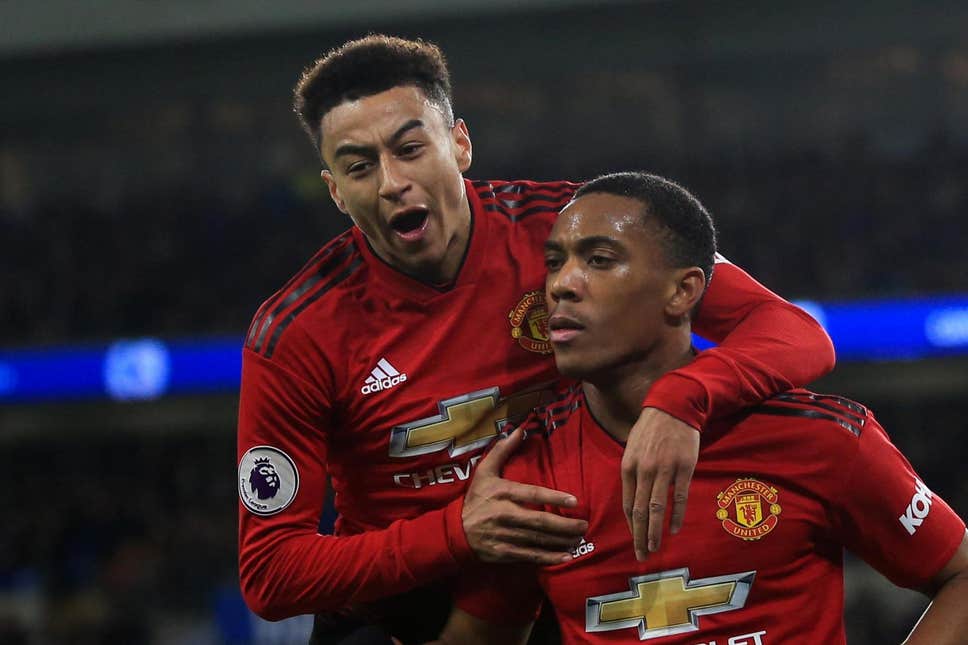 United’s caretaker boss revealed during his pre-match press conference earlier, ahead of their FA Cup fifth-round tie against Chelsea on Monday.

Lingard (hamstring) and Martial (groin) both limped off during Tuesday’s 2-0 Champions League defeat by Ligue 1 champions Paris Saint-Germain. The news certainly isn’t positive at an important stage in their campaign, with crunch clashes against title challengers Liverpool and their return leg in Paris to come two weeks on Wednesday.

Martial (right) sustained a groin injury and despite his best efforts, couldn’t continue and was replaced at half-time against PSG.

Solskjaer also admitted 17-year-old striker Mason Greenwood, who has scored 26 goals and created four more in 24 matches at youth level this term, is also sidelined with injury – otherwise he’d have been in contention to make his senior debut at Stamford Bridge on Monday.

“I think they’ll be out for two-to-three weeks. Then you’re looking at young players, Mason Greenwood, it’s your time to step in. Unfortunately, he’s injured, out for a couple of weeks as well. Sometimes that’s how the luck goes but Mason will get his chance.”

After an 11-match unbeaten run under Ole’s reign as caretaker manager, PSG ended it in efficient fashion at Old Trafford. However, this news can be a welcome boost to those who have struggled for form in recent months too.

Solskjaer was quoted as saying: “It’s a chance for anyone who plays. Alexis, Romelu, Chong [Tahith Chong] or Angel [Gomes]. Anthony and Jesse have done really well for us, they’re vital but then again with Rom and Alexis, they’ve got different skillsets and will be able to show what they can do, so we need to gel a team together for Monday.”

Alexis Sanchez’s form has drastically fallen since sealing a swap deal move from Arsenal 13 months ago. Himself and Juan Mata – both substitutes against PSG – failed to have much impact, while Romelu Lukaku’s struggles have been evident.

Lukaku and Alexis’ arrivals in recent seasons have been expensive – but not gone as planned, particularly under Mourinho’s guidance. (Picture source: Goal)

It’s likely Ole will use either Alexis or Lukaku alongside Marcus Rashford in a three-pronged attack. It’s similar to the set-up used for their fourth-round win against Arsenal. However, £52m summer signing Fred and Mata will both be hopeful to start themselves.

Gomes made history, becoming the first millennial to feature in the Premier League on matchday 38 in the 2016/17 campaign. He has since been involved in two more brief cameos, in the FA Cup and top-flight to date.

Chong is a year older and currently a better player than Gomes. Making his senior debut during their FA Cup win over Reading last month, he’s closer to the senior scene than his English teammate. Versatile and creative, the 19-year-old could earn more minutes in the remaining months this term.