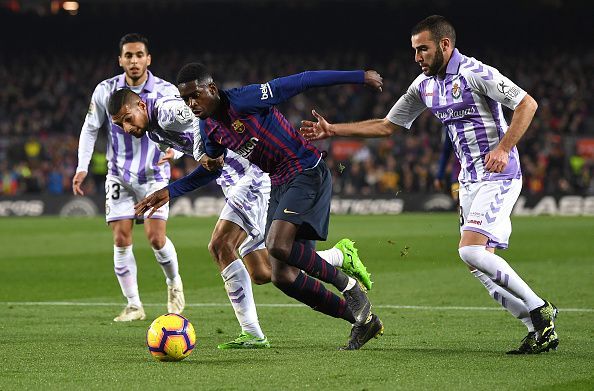 Barcelona’s slender win vs. Valladolid means they remain seven points clear atop La Liga ahead of their Champions League clash with Lyon in midweek, but which players struggled while others excelled?

Barcelona maintained their seven-point lead atop La Liga after a slender 1-0 win over Real Valladolid, ahead of their Champions League last-16 clash with Lyon in midweek. Lionel Messi netted his 22nd league goal this term from the penalty spot, after a marauding Gerard Pique – shaping to shoot – was held in the box by midfielder Michel.

The visitors had goalkeeper Jordi Masip to thank for keeping them in the game, as the Barca academy graduate made a string of important saves from Messi and substitute Luis Suarez during an action-packed second-half.

The result is Valladolid’s fifth defeat of 2019 and means they’re just three points off the relegation places after 24 matches. With that all in mind, here’s a look at five players who either impressed or struggled during Barcelona’s victory on Saturday evening: 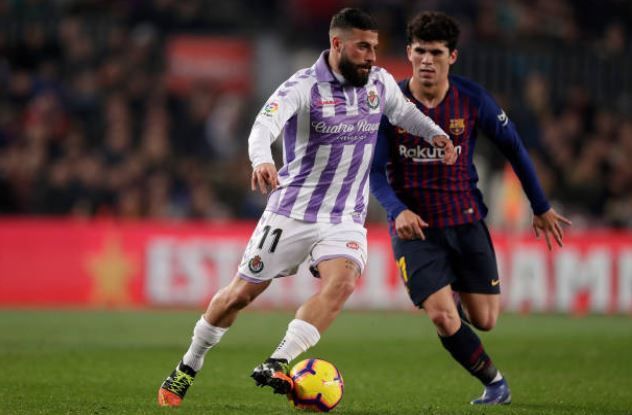 In a game like this, Daniele Verde needed to show composure and good decision-making in possession if Valladolid were going to have much chance of snatching a result.

Instead, the 22-year-old Italian struggled throughout and was unsurprisingly replaced after 65 minutes. He created a joint team-high two key passes on the evening but crucially lost the ball on five occasions during his stint on the pitch too.

76.9% pass accuracy, 41 touches, one tackle, and one interception. This just wasn’t good enough – especially given Barca’s overload with Valladolid’s three-pronged attack. On another day, the visitors would have been travelling home after a heavy defeat, if not for some excellent saves and wasteful finishing on Barcelona’s part. 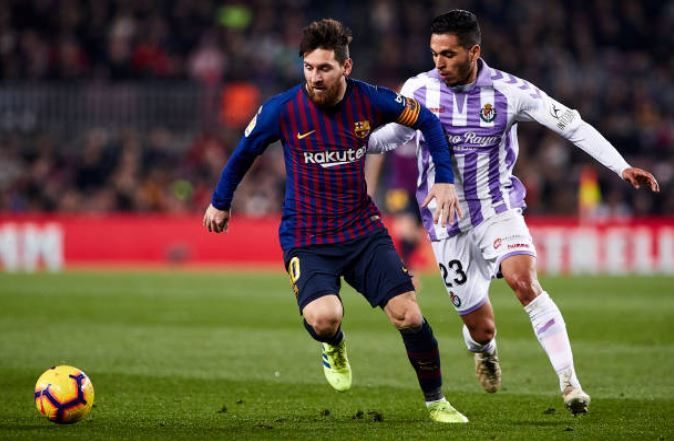 I never start these with statistics, but Anuar Mohamed is an exception to the rule. A whopping 12 completed tackles, two interceptions, one clearance, 81.5% pass accuracy and 76 touches. Certainly a busy evening’s work for the 24-year-old, who excelled at the Nou Camp while most of his teammates faltered under the pressure.

It goes without saying that his 12 tackles was a game-high, but the fact he managed the feat with only two fouls committed is commendable. Midfield partner Michel had three tackles, five fouls and gave away the game-winning penalty too.

Tireless out of possession and equally comfortable with it at his feet, his defensive positioning was excellent as he constantly looked to pounce on mistakes and recover the ball where possible.

Pressing Messi & co ultimately paid dividends, as it helped set up a number of threatening attacking moves – most broke down before they could test goalkeeper Marc-Andre Ter Stegen though. 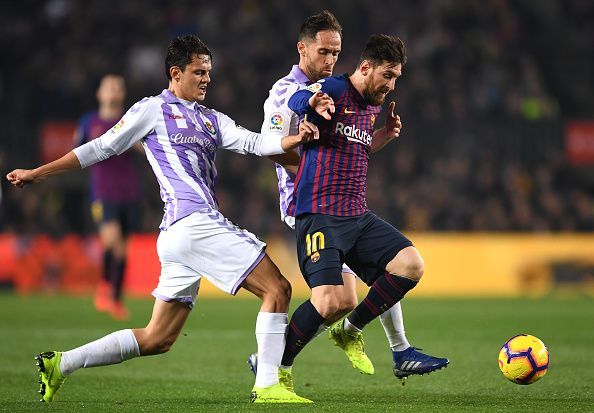 Very disappointing. An early booking for a late aerial challenge set the tone as the former Manchester City forward, currently, on-loan from Villarreal often cut a forlorn figure in the final third.

Perhaps harsh to place him high here, considering the level of hype surrounding his arrival in Spain two years ago and quality of opposition, this is precisely the type of occasion that Unal should be hungry to display his ability in.

Today’s game marked his 50th appearance in Spain’s top-flight. Nine goals and four assists isn’t good enough for someone of his ability – particularly after scoring double that tally in the Eredivisie with FC Twente.

He recorded just 28 touches of the ball before being replaced for Keko after 78 minutes, which might not seem like an important statistic. Until you delve deeper. Only Kevin-Prince Boateng (23) had fewer touches in possession than the Turkish striker. However, the Ghanaian still did a fair bit with the ball and worked tirelessly in the final third, whilst also unfortunate not to have created a goal for himself during his hour on the pitch.

That’s the main difference: Boateng provided more in less time, while Unal seemed demotivated from the offset and a lack of service into his path from teammates didn’t help his cause either. It’s still not a justifiable reason for his isolated display though, he should’ve done more. 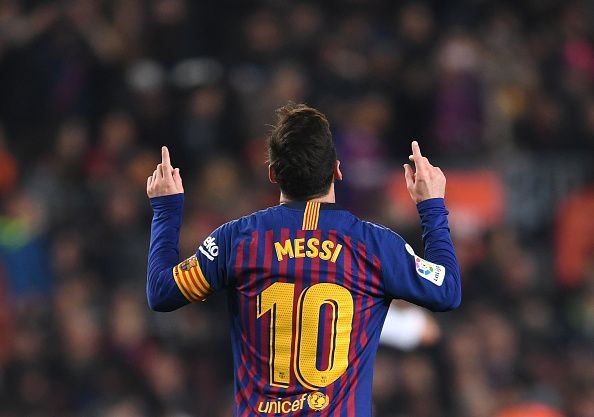 Usually, when someone has 12 shots, is dispossessed the same amount of times and almost gets himself sent off, they’d be in the flop column. Just like Anuar was, Lionel Messi is a special exception to the rule again.

The 31-year-old had a poor game in front of goal, he’d be the first to tell you that himself. Whether it was near misses that flashed past the post, wild efforts or tame shots that Masip gratefully smothered, his decision-making was often erratic.

He almost felt the need to go it alone from deep midfield areas and dribble beyond the Valladolid backline, but you couldn’t blame him. Ousmane Dembélé flattered to deceive while it’s clear Kevin-Prince Boateng hasn’t yet built up enough cohesion to move in sync with his teammates during their attacking moves at speed.

However, he was ultimately the matchwinner: making no mistake with a fierce penalty, slamming hard into the bottom right-hand corner to break the deadlock on the stroke of half-time.

Aware that he was having an off-night in regards to his shooting, Lionel was keen to tee up his teammates – a game-high eight key passes – but the likes of Dembele and substitute Luis Suarez couldn’t deliver a killer goal before he returned to the spot and saw his second effort well-saved by Masip.

Booked for dissent after a poor tackle on him, he was fortunate to stay on (committed four fouls in 90′), but did precisely enough to drag his team through a testing evening’s work. 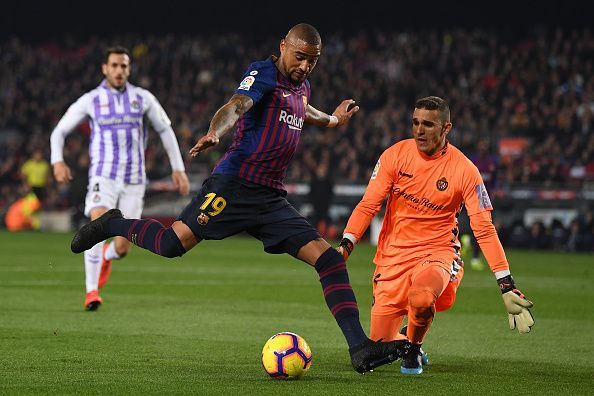 Playing against your former side can often only go one of two ways: you perform well and remind them what they’re missing, or prove them right for allowing you to leave. Jordi Masip was the Man of the Match on this occasion, but his performance also emphasised just how difficult it can be for goalkeepers to earn their chance centre-stage.

The 30-year-old, who had been at Barca since 2004, joined Valladolid on a free in the summer of 2017 and hasn’t looked back. He proved a key component of the club’s promotion campaign in 17/18 and has kept an impressive seven clean sheets already this term – despite having an inconsistent backline in-front of him.

Here, he flourished on his return to the Nou Camp. After a warm embrace with Messi during the pre-match pleasantries, it was down to business for the Spaniard and the visitors had their ‘keeper to thank for keeping them in the match throughout.

He made seven saves including an excellent penalty stop to thwart Messi’s second attempt and consequent rebound on his goal-line. His distribution was good and he also displayed great anticipation to rush off his line, closing down angles as Barca were often baring down on-goal in numbers.

Boateng, Messi and Suarez found themselves regularly frustrated as he either made their efforts look tame or force them into mistakes in front of goal, where you’d usually bet on them to convert their respective chances. If anyone deserved to prevail in this fixture, Masip certainly did. Displays like these certainly improve his reputation and are likely to attract interest from other European clubs too, given Valladolid’s inconsistent form this term.