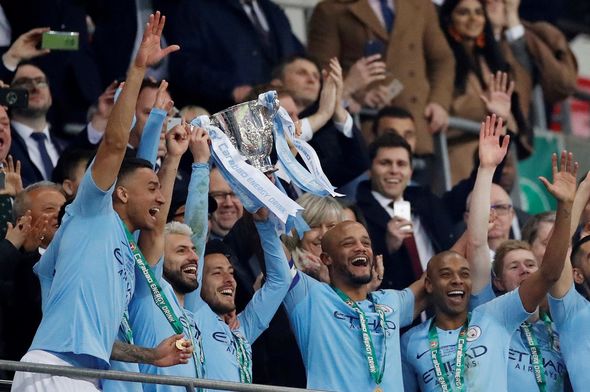 The final itself – three weeks after City’s 6-0 league thrashing vs. the Blues – will always be remembered for goalkeeper Kepa Arrizabalaga’s actions after defying manager Maurizio Sarri’s instructions to be substituted late in extra-time.

In a nervy encounter with few clear-cut opportunities, the defending Premier League and Carabao Cup champions ultimately prevailed with a narrow win decided via penalty shootout.

This game was not without its drama though – particularly after Sergio Aguero had an effort chalked off for offside in the second-half.

The Argentine, who has netted 10 goals in his last seven appearances across all competitions, thought he’d scored. Referee Jon Moss used VAR review to overrule the decision though, as replays showed he was marginally offside in the build-up on the far side.

N’Golo Kanté, one of Chelsea’s best performers as usual, squandered a great opportunity to put them in-front after Eden Hazard’s mazy run into the box. He teed up the Frenchman, who ran onto the pass and let fly from a tricky angle, but his resulting effort flew over the crossbar. 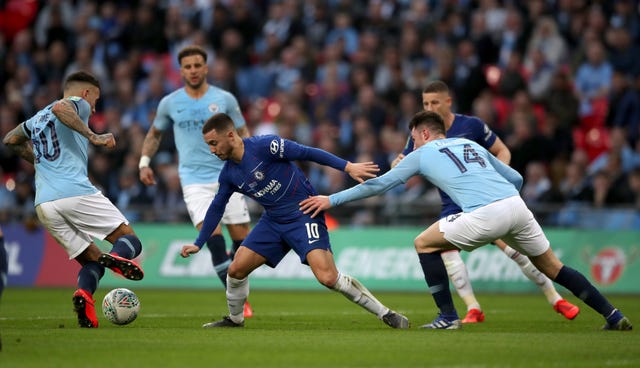 Eden Hazard (centre) grew into the game and proved a handful for City’s backline to deal with. (Picture source: Nick Potts/PA)

Potentially a match-defining moment, wasted. Tough tackles and challenges aplenty also forced the spectacle into a stop-start affair, as Fernandinho, Antonio Rudiger and Jorginho were all booked for cynical fouls in the second-half.

No guesses for who the game’s first booking went to – David Luiz – who was cautioned after half-an-hour and the Brazilian didn’t look comfortable whenever City broke in transition. Sarri, whose selection was without a recognised striker, introduced Gonzalo Higuain and teenage winger Callum Hudson-Odoi late on. Despite their best efforts, the scores remained goalless.

Kepa’s important saves, then refusing to be replaced

Ironically, they had Kepa to thank for that after excellent saves to deny Aguero twice. First from distance, the second at close-range which saw him suffer a minor knock in the process.

Having received medical treatment from the physios, he was okay to continue and waved away Sarri’s insistence for him to be replaced as second-choice goalkeeper Willy Caballero waited patiently on the sidelines. 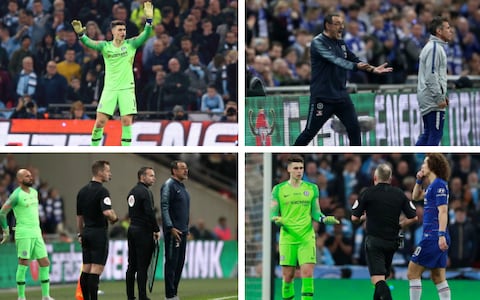 Kepa refused to leave the pitch after being called to come off for Caballero, late in the second-half of extra-time. (Picture source: The Telegraph)

Sarri was livid and unsurprisingly, too. His goalkeeper had defied orders to come off – but had already reassured him and teammates that he was okay to continue.

Despite saving Leroy Sane’s penalty in the shootout, he should have stopped Aguero’s low effort and Sterling made no mistake to end the Final with aplomb – watching his strike arrow into the top corner after misses from Jorginho and Luiz. 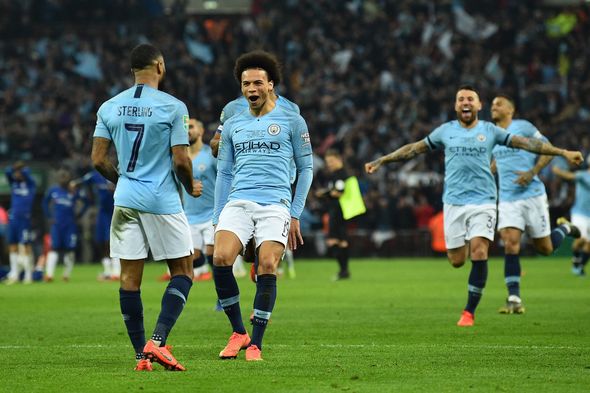 Sterling wheels away to celebrate his match-winning penalty with teammates after their 4-3 win in the shootout. (Picture source: The Express)

city retain cup in dramatic style – What does the result mean?

This result means City have now won three pieces of silverware in the last twelve months, though deep down they know this triumph is one of four they’re targeting by the end of May.

Liverpool’s goalless draw at Manchester United means they are one point behind Jurgen Klopp’s Reds, while they hold a slender advantage over Schalke 04 in their Champions League last-16 tie. In the FA Cup, they’re set to face an away trip to Championship side Swansea in the quarter-finals next month, so things are looking promising.

As for Chelsea, the Kepa v Sarri debacle and consequent fallout from today’s incident will add more pressure to the club’s frustrating situation in west London. It’s becoming increasingly clear the Italian’s tenure will be short, while the player power debate will arise after one of his key men refused to be substituted. After a grim start to 2019, this is the last thing they need. Damage limitation is on the cards.