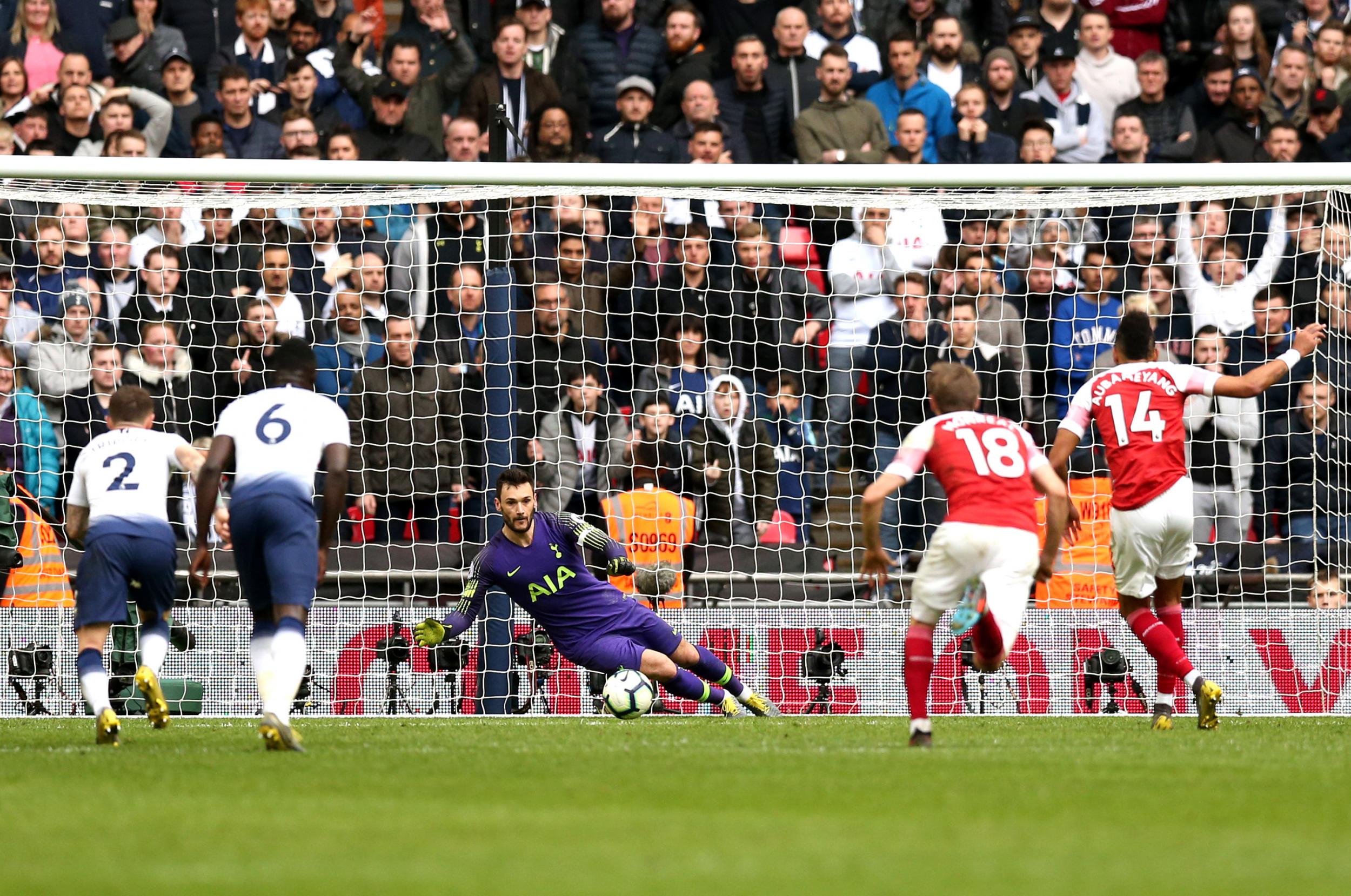 Hugo Lloris’ late penalty save from Pierre-Emerick Aubameyang saw Tottenham hold on for a valuable point against Arsenal, during a North London Derby overshadowed by poor officiating decisions.

Harry Kane equalised from the penalty spot after Aaron Ramsey’s well-taken opener, though the forward was in an offside position before Shkodran Mustafi’s needless barge on the England captain.

It seemed typical. Unai Emery’s Arsenal side were underdogs coming into this affair and his team selection was interesting to say the least. Sead Kolasinac, Lucas Torreira, Mesut Özil and Pierre-Emerick Aubameyang were all on the substitutes’ bench – Alex Iwobi and Aaron Ramsey somewhat surprise inclusions from kick-off.

The pair justified their place almost instantaneously, with Ramsey breaking the deadlock after 15 minutes when Davinson Sanchez’s costly mistake in possession teed up Alexandre Lacazette. His pass was perfectly weighted for an onrushing Ramsey, who darted beyond a trailing Victor Wanyama and left Hugo Lloris in his wake before dinking his effort goalwards with aplomb. 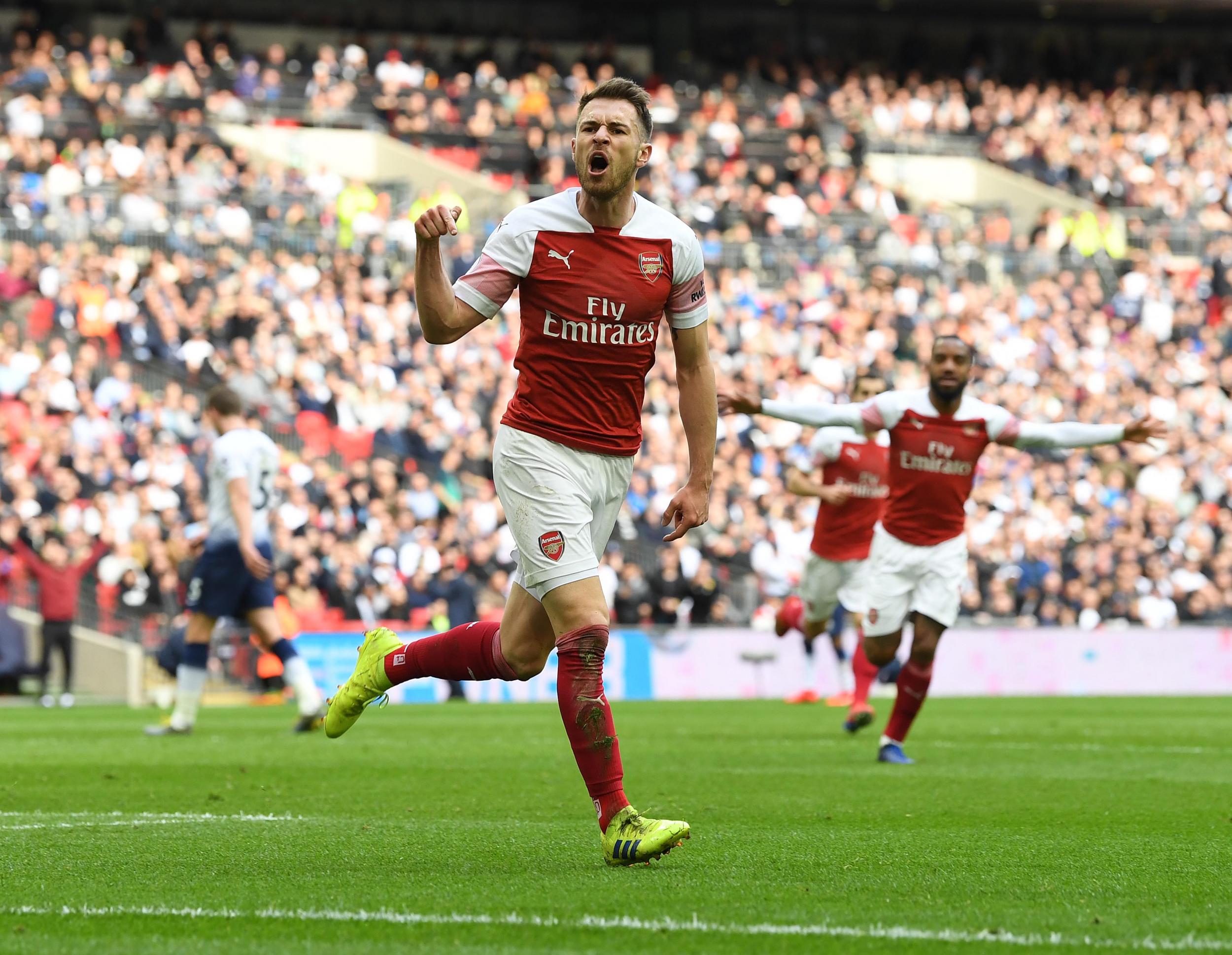 It was an encouraging approach from the visitors, who defended well in numbers and frustrated Spurs. After a 2-0 defeat by London rivals Chelsea in midweek, Mauricio Pochettino’s men needed a response – particularly after inconsistent form had seen their title hopes disintegrate in drastic fashion in recent weeks.

They lacked any real cutting edge in the final third and found themselves stifled, though their intensity increased once Kane headed an offside goal in midway through the first-half.

Christian Eriksen came close with an effort which fizzed narrowly wide of Bernd Leno’s near post, though things intensified just before the interval. Alex Iwobi forced Lloris into a good acrobatic save after getting the better of Kieran Trippier down the left, before Leno produced an excellent double stop in style. 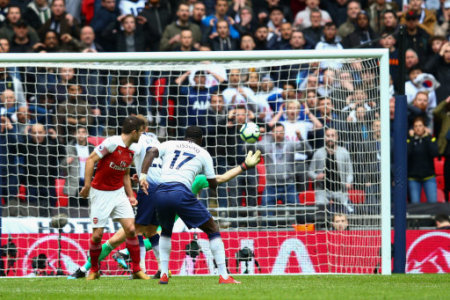 Matteo Guendouzi, who enjoyed a decent outing, was replaced at half-time. Torreira replaced him in a like-for-like change – though chances from Lacazette and Toby Alderweireld were spurned as both teams came close before the hour mark.

Aubameyang replaced Lacazette just before the 60-minute mark, while Erik Lamela was introduced in a more creative change by Pochettino with his side a goal behind. Within the space of a few minutes, Lamela was booked and had a promising opportunity which flashed narrowly wide. Spurs, despite their defensive deficiencies, were awake.

Then a contentious decision saw the game’s complexity shift dramatically in a matter of seconds, as Kane was needlessly barged inside the box by Mustafi from Eriksen’s inswinging free-kick. He was in an offside position when the ball was played and replays confirmed as much, though it didn’t matter to referee Anthony Taylor who pointed straight to the spot. 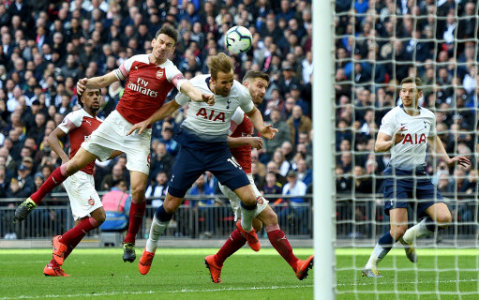 Mustafi’s costly foul on Kane gifted Spurs a way back into the match, even though the forward was in an offside position. (Picture source: PA Images)

Kane made no mistake from the resulting spot-kick, sending Leno the wrong way to equalise. Then, just as Arsenal were left stunned by the manner in which they had conceded, a lifeline appeared.

Sanchez, already at fault for the Gunners’ first goal, was penalised after tugging Aubameyang to ground inside the box. He stepped up to strike, but his eventual effort was tame and Lloris guessed the right way to thwart him in stoppage-time.

To add insult to injury, Torreira was given his marching orders with a straight red card after tackling Danny Rose. His studs were up on the follow through, although the Uruguayan midfielder clearly won the ball first and it typified the afternoon’s struggles with regards to officiating.

Rose was lucky to be on the pitch himself after a nasty challenge on Leno down the opposite end, while the lack of VAR to assist the officials was clear again as Kane being in an offside position ultimately cost Arsenal two points against their fierce rivals.