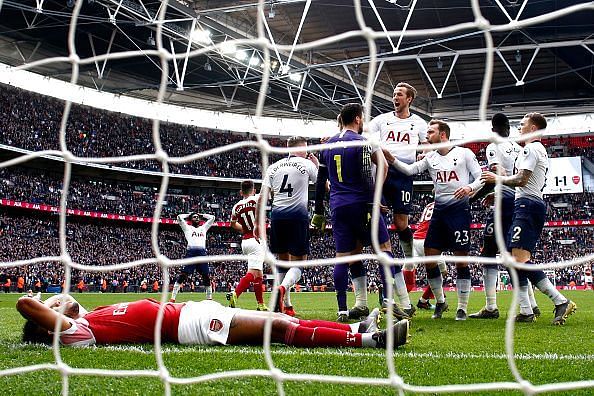 Tottenham had Hugo Lloris’ late penalty save to thank for their 1-1 draw vs. rivals Arsenal, but which players excelled while others struggled at Wembley?

Hugo Lloris‘ late penalty save from Pierre-Emerick Aubameyang saw Tottenham hold on for a valuable point against Arsenal, during a North London Derby overshadowed by poor officiating. Harry Kane equalised from the penalty spot after Aaron Ramsey’s well-taken opener in the first-half, though the forward was in an offside position before Shkodran Mustafi’s barge on the England captain.

Both sides created promising chances, which were ultimately squandered. Bernd Leno made an excellent double save to thwart Christian Eriksen and Moussa Sissoko in quick succession, while Arsenal substitute midfielder Lucas Torreira was given the first red card of his professional career after a late tackle on Danny Rose in stoppage-time – Rose himself was fortunate to still be on the pitch following a high studs-up challenge on Leno.

Tottenham’s grip on the Premier League‘s top-four continues to loosen after this result, while Arsenal crucially dropped points as Manchester United’s win over Southampton saw them leapfrog the Gunners into fourth with Chelsea having two games in hand over them in sixth place, currently four points behind.

With that all in mind, here’s a look at five hits and flops from an enthralling finish to a memorable derby at Wembley: 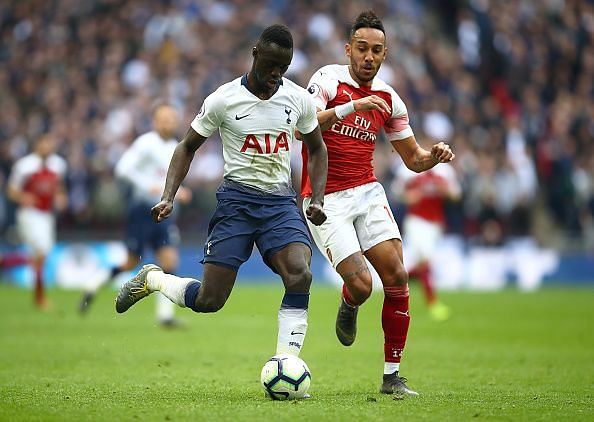 Shkodran Mustafi and a few other quiet performers were in contention for a place here, but Aubameyang trumps them. Having replaced Lacazette near the hour mark, the Gabon international found himself effectively marshalled by Sanchez – who was enduring a tough game – while failing to impose himself in a game which Arsenal needed a creative response.

He should have done better when latching onto Henrikh Mkhitaryan’s searching through ball and then essentially won a cheap penalty after tussling with the Colombian in the box late on.

For someone who has scored 16 league goals this term, he crucially lacked the composure and conviction with his spot-kick and ultimately squandered a golden opportunity to net the Gunners’ late winner. 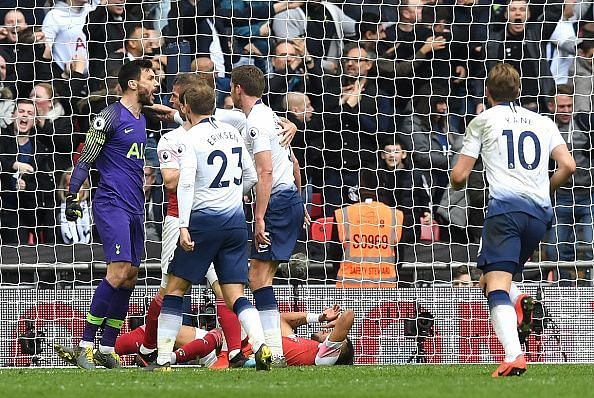 After a forgettable display away at Stamford Bridge in midweek, critics were suggesting that Hugo Lloris’ inconsistent form was too alarming to ignore.

Paulo Gazzaniga, who has impressed when called upon this term, should have been there in his place to step-up and give the World Cup winner a stark reality check – that his starting spot is not a guarantee when he’s making mistakes which lead to goals in crucial matches.

Although he probably should have stayed on his feet a little longer when attempting to deal with Ramsey’s strike, you couldn’t attach any blame at his door for the goal itself. His backline had deserted him and despite delaying for as long as possible, the Welshman broke the deadlock in style.

However afterwards, the 32-year-old proved precisely why he’s such an integral figure for Tottenham. Making a good stop to deny Alex Iwobi’s effort before half-time, he delivered big time with an important penalty save in stoppage-time to stop Arsenal snatching all three points. That will stand him in good stead, with more testing fixtures to come before long as Spurs’ season intensifies. 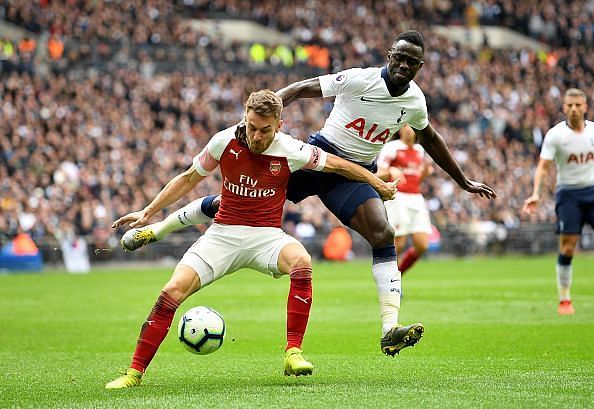 Sanchez was left exposed and struggled against Arsenal, who on another day, would have won

Davinson Sanchez has settled into England’s top-flight well since a £30m move from Ajax two years ago, but the 23-year-old endured a torrid time at Wembley on this occasion.

Although it wasn’t solely his doing, he committed the all-important error which led to Ramsey’s opener and the afternoon didn’t get much better for him either.

Despite winning a joint-high four aerial duels, he failed to complete a tackle and committed two fouls. Two interceptions, three clearances and a blocked shot didn’t exactly make up for it either, particularly when facing Aubameyang in the latter stages – who he had under control.

That was until he needlessly tugged at him, bringing the forward to ground in the box. The spot-kick seemed harsh but equally, he only had himself to blame. Thankfully from his perspective, Lloris was there to bail him out. 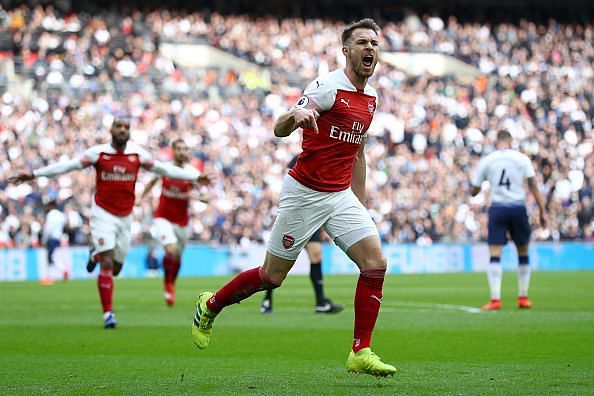 Defiant last show: Ramsey wheels away to celebrate his excellent finish, during the Welshman’s final NLD

Although a surprise inclusion from kick-off here, Aaron Ramsey impressed on his final North London Derby appearance before his imminent Juventus move this summer. The 28-year-old, who signed a lucrative pre-contract agreement with the Serie A giants earlier this year, has struggled for form under Unai Emery and a lack of regular minutes has been part of the problem.

However, the Welsh midfielder cannot be accused of not wanting to give it his all and that was the case against a Tottenham side who were sluggish defensively. He made them pay with aplomb after 15 minutes with a deft chip beyond Lloris, before wheeling away to celebrate at Wembley – where he asserted legendary status in Arsenal colours over recent years.

He made one tackle, had one blocked shot and committed three fouls – a necessary means to help frustrate Tottenham as they failed in their attempts to regularly probe a vulnerable Gunners backline.

One key dribble and pass completed, 73.1% pass accuracy and 39 touches, it was far from a vintage display from the midfielder before being replaced after 70 minutes. He delivered a defiant showing though, regularly tracking back defensively while showing composure to slot home when relied upon. If only his attacking teammates could have done the same. 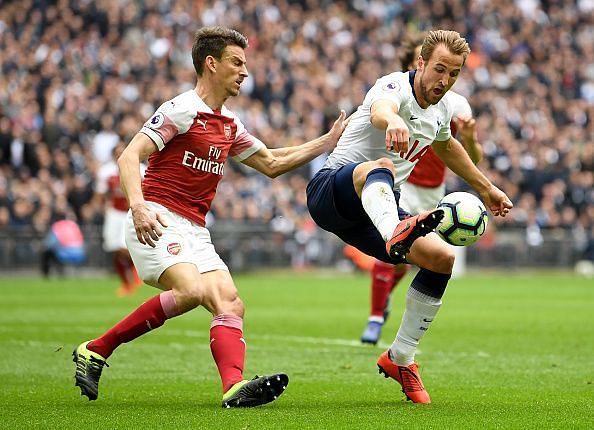 Koscielny was impressive against Tottenham and needed to be, as Kane and Son regularly looked to probe

Upon his return to first-team football earlier this season, Laurent Koscielny was regularly criticised and suggestions were made that he was “finished” at the top level.

Individual defensive displays like this one, as well as his performance against Chelsea, prove that’s far from the case. Sokratis earned plenty of praise and the Man of the Match award from one English broadcaster, but it was actually the showing of his captain Koscielny which quietly stood out above most.

He won three aerial duels, which was a game-high statistic for the visitors. They were all important interventions, either to stop promising aerial passes in their tracks or clearing his lines as Spurs pressed. His match statistics speak for themselves: three tackles completed, two interceptions, a game-high seven clearances and importantly, no fouls committed!

Sokratis crucially gave away the free-kick which led to Kane’s dubious penalty, Nacho Monreal was impressive on his return but Mustafi justified the pre-match debate about whether he should have even been playing in an uncomfortable role at right-back.

Reports suggested Koscielny was carrying a minor injury pre-match too, and the fact he came through unscathed – particularly after some heavy challenges by Tottenham players – is refreshing to see. Despite his flaws, Koscielny’s far from finished yet.