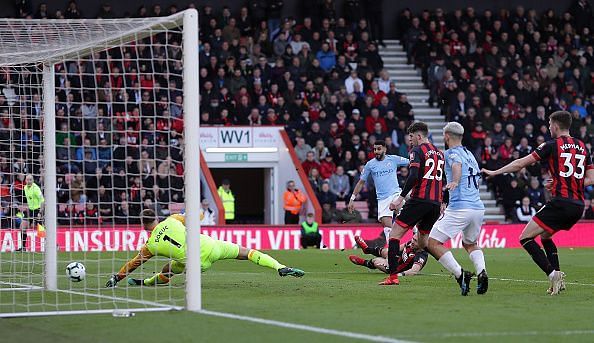 Manchester City kept pressure on Premier League leaders Liverpool after a slender 1-0 away win over AFC Bournemouth yesterday, but were made to work hard for their victory on the South Coast. Second-half substitute Riyad Mahrez broke the deadlock with a low drilled effort which beat Artur Boruc at his near post, in another forgettable game from Pep Guardiola’s perspective.

He lost both John Stones and Kevin de Bruyne through injury early after the restart. Although Mahrez proved matchwinner while Vincent Kompany slotted in well, he’ll be sweating over their fitness after Fernandinho suffered a thigh problem during their Carabao Cup win vs. Chelsea last Sunday.

The result is Bournemouth’s sixth defeat in ten matches across all competitions to start 2019 and after their 5-1 thumping by Arsenal in midweek, a respectable loss – but one that will have been compounded by their inability to register a shot on target at home in this one.

With all of that in mind, here’s a look at five talking points from this affair as City were made to earn a vital away victory: 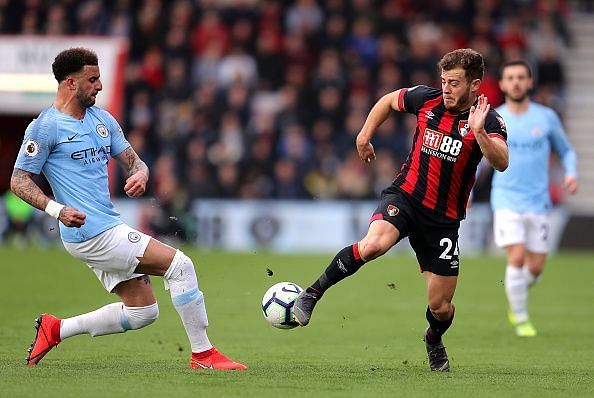 Fraser, so often central to Bournemouth’s creativity in the final third, was shackled once more

After a 5-1 thumping by Arsenal at the Emirates in midweek, optimistic Bournemouth fans would have seen their upcoming home fixture against defending champions Manchester City and braced themselves for impact.

After all, Pep Guardiola’s men had netted a league-high 75 goals in 28 matches before this fixture. Even still though, it was no excuse for the type of rearguard defensive display that was on show and it quickly became apparent the hosts were playing for a draw.

It’s all well and good when this tactic proves successful, or you’re able to snatch all three points after a well-executed counter-attack strike. What happens if you concede though? The gameplan goes completely out of the window, just like it did after Mahrez’s opener on 55 minutes.

The celebration said it all: relief. Relieved they didn’t have to keep probing in the same manner anymore to create chances, particularly as Bournemouth defended well in numbers and often had Nathan Ake’s interventions to thank they weren’t behind before then. You couldn’t say it wasn’t coming either, with Sergio Aguero and Raheem Sterling both coming close, while Eddie Howe’s attacking alterations were too late and proved futile.

It’s the type of negative football style that you don’t tend to associate with Bournemouth and even though they were playing against a side of City’s quality, this was a sign of too much respect. Even if they had attacked more as a unit, this would’ve asked questions of the visitors’ backline – just like Schalke did in their Champions League clash a fortnight ago. Disappointing.

#4 David Brooks targeted by City and rightly so 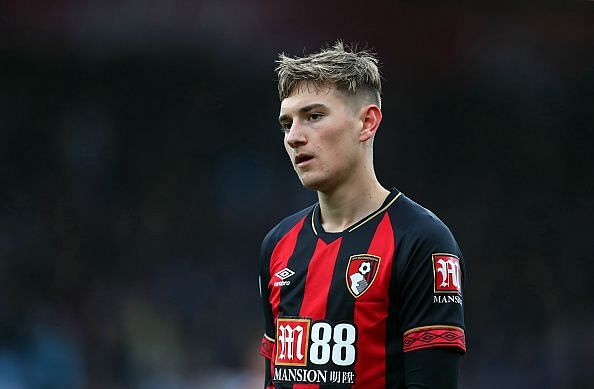 Brooks endured a tricky return from injury against his former side

David Brooks’ £10m move to Bournemouth from Sheffield United last summer was the cause of much surprise. A talented 21-year-old creative midfielder joining Eddie Howe’s men, would it be a wise move or one that would falter and fail to live up to expectations – ala Jordon Ibe?

Having come through the youth system at Manchester City before departing for Sheffield in the under-18s five years ago, Brooks has settled well to life in England’s top-flight and impressed while doing so.

Six goals and four assists in 23 appearances, he’s played in a range of different creative positions and after a four-game layoff following an ankle injury vs. Chelsea on January 30, he made his return against the defending champions here.

You could tell that Pep and his coaching staff had prepared for this game, giving player instructions specifically to mark the Welshman out of the game and tackle him hard: isolating his impact and reducing the service into his feet, where he thrives.

93.3% pass accuracy – Bournemouth’s game-high – to go with one tackle, clearance and three interceptions just shows how much defensive work Brooks had to do, in a game that Bournemouth were starved of possession. When he did have the ball though, he was effectively crowded out. Dispossessed on five occasions, City had done their homework and frustrated the 21-year-old – who isn’t at 100% – before being replaced after 75 minutes.

#3 Stones and de Bruyne an unwelcome injury blow for City 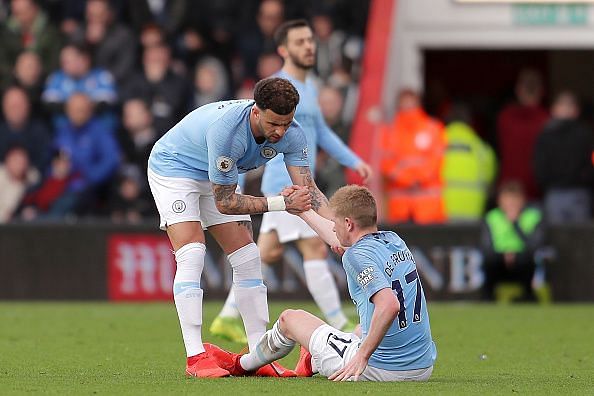 de Bruyne limped off with a hamstring injury just after the break, while Stones (groin) was soon replaced too

Injuries can come at any time, they are cruel and unforgiving. We all know that – but none more so than City key man Kevin de Bruyne this season.

Having just been gradually getting back up to speed after a recurrence of the knee ligament injury which sidelined him from August to December, this is the last thing he or City need at a crunch time in their season on all fronts. With three key passes and two tackles completed, the 27-year-old Belgian was enjoying a solid outing on the south Coast before hobbling off.

As for John Stones, the importance of a settled backline cannot be understated. His defensive partnership alongside Aymeric Laporte (hamstring) was ever-improving before the Frenchman’s injury during their Carabao Cup Final win last weekend and now he’s sidelined too – again.

Although Pep revealed it was a precautionary measure to avoid further damage, the Englishman will be sweating over his fitness and hope he recovers quickly. City now have a week before their next fixture, a home clash with Watford so there is more time than usual for recovery – for Stones at least, even if de Bruyne may be out for longer.

Pep revealed as much post-match, saying: “John was more of a caution, we will see tomorrow,” said the manager.

“Kevin is his hamstring, it’s normal. We played 25 games in 93 days I think. It means every three days and a little bit more we play one game so it’s a physiological issue. We demand these guys play that way every three days when the body is not always recovered.

“Everybody is committed and we wait for Kevin to come back. Right now, Laporte is getting better. Stones felt better than Vinny, that’s why I played John. His groin felt a little bit tight and we didn’t take a risk. Now we have one long week and hopefully it can recover.”

#2 Nathan Ake continues to ooze class with clubs watching on 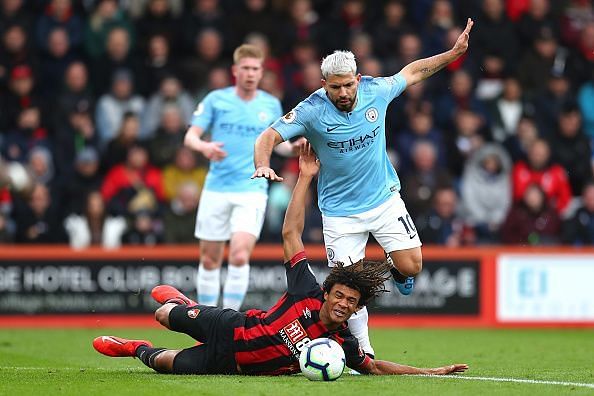 If not for Nathan Ake’s display, Bournemouth would have been heavily beaten on this occasion. There’s no doubt. That’s not to say he was their only good performer in defence, but the 24-year-old Dutchman shone – as he usually does – against the league’s best attackers.

After a successful loan spell on the south Coast in 16/17, the Cherries made his deal a permanent one for a club-record £20m from Chelsea the following summer.

He’s started and played every game under Eddie Howe this season, remained a consistent defensive figure and impressed with his discipline, reading of the game and ability to shackle the league’s best forwards regularly. Against City, that was again the case.

Jack Simpson (22) and Chris Mepham (21) both worked well defensively, but Ake led by example and could do nothing to stop Mahrez’s effort, being the opposite side of the box to his strike.

He made two tackles, one interception, a game-high eight clearances, three blocked shots and won two aerial duels too – content in putting his body on the line and making important interventions to frustrate City as they constantly probed for goals.

A lot has been said about a £40m Chelsea return, rumoured interest from Manchester United and Tottenham as well as why Arsenal should “break the bank” for Ake’s signature this summer. He continues to work hard and with each passing week, showcases precisely why the Blues were naive to let him go in the first place.

#1 Mahrez’s matchwinner – oh how he needed that! 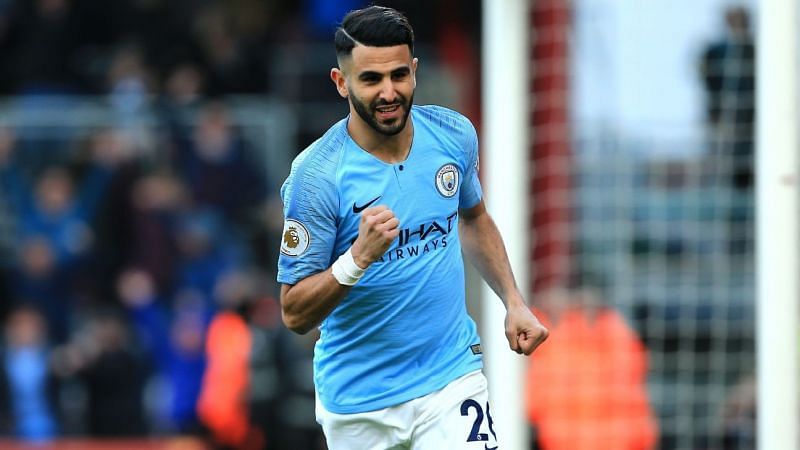 With a £60m price-tag floating above his head, it’s fair to say that Riyad Mahrez has so far failed to live up to high expectations in Eastlands this term. After electrifying fans and critics alike at Leicester, the 28-year-old was angling for a step-up in quality and finally got his wish when City came calling last summer.

However, the Algerian winger has flattered to deceive and struggled to earn a starting berth among a star-studded City team. That seems baffling to say, considering he’s now scored eleven goals and created ten assists (all comps) this term.

Therein lies the problem. His production numbers may appear impressive on the surface, but they’re not in the grand scheme of things. Decision-making, composure and wasteful finishing at key moments often let him down and it’s no wonder he has predominantly been utilised as a rotation option under Guardiola this season.

It’s a similar role to the one Bernardo Silva had last season, yet now the Portuguese international is easily one of the first names on his team sheet every matchday. So it’s not to say he can’t develop and justify his place, but inspired performances like these off the substitutes’ bench definitely help Mahrez’s cause.

He recorded four shots, two key passes, 85.7% pass accuracy and crucially the winning goal for City in a game where they dominated possession and chances without reward before his introduction.

Questions can be levelled Boruc’s way after letting the effort squirm beyond him at his near post, though Mahrez and Manchester City will not care. It’s his sixth league goal of the campaign – first since December vs. Watford and he’ll be hoping to build on this with more important fixtures to come.