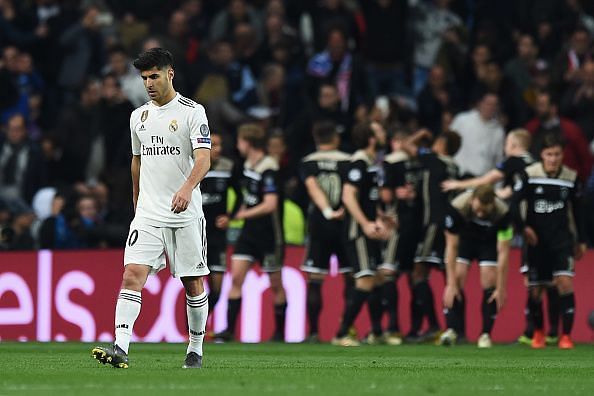 Champions League holders Real Madrid were knocked out in stunning fashion, after a 4-1 home defeat by Ajax. Which players excelled while others faltered though?

Ajax‘s stunning 4-1 win over Real Madrid at the Bernabeu means the Eredivisie giants have knocked out Santiago Solari’s men: to progress from a Champions League knockout fixture for the first time in 22 years.

The emphatic nature of their second-leg turnaround, having trailed 2-1 from the first leg last month, has sent shockwaves across the footballing world. Real – who were UCL winners in four of the past five seasons – have declined significantly since the departures of talisman Cristiano Ronaldo and manager Zinedine Zidane last summer.

Goals from Hakim Ziyech, David Neres, Lasse Schone and a Man of the Match display by former Southampton playmaker Dusan Tadic – who also got on the scoresheet – proved enough for Ajax to prevail, despite the hosts’ best efforts of a surprise comeback. Substitute Marco Asensio reduced arrears with a smart one-touch finish from distance, after both Raphael Varane and fellow sub Gareth Bale hit the woodwork.

After a defeat of such magnitude, there are questions aplenty asked of Real’s long-term future following impressive continental dominance. Ajax, who were Europa League runners-up two years ago, have wowed neutrals and impressed among the best sides this term – which suggests they could be this season’s Monaco and progress even further. Without further ado, here’s a look at five hits and flops from a memorable evening at the Bernabeu: 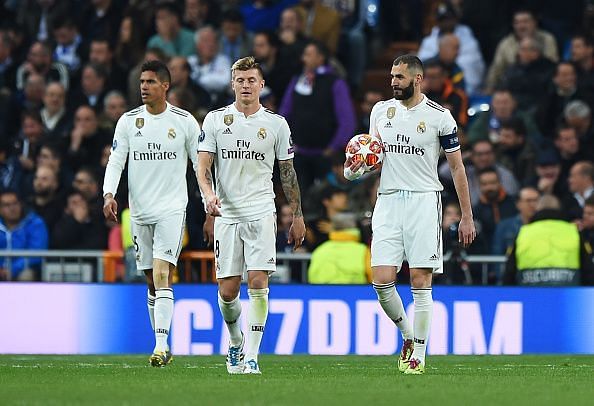 Toni Kroos – Real’s midfield conductor – struggled in a big way against an energetic Ajax side whose intensity proved too much to handle out of possession. His three key passes were only bettered by Tadic, the game’s MOTM, but there wasn’t much else to shout about from the German’s performance.

For Ajax’s opener, he crucially relinquishes possession in his own half. Under pressure from Ziyech tracking down his side, he attempts a backpass but instead it has the opposite effect: allowing both Ziyech and Tadic to advance forward on the counter-attack.

If you watch Neres’ goal again, you will see Kroos ambling back in the build-up. Instead of helping to press Tadic, he’s jogging back at a relatively slow pace and simply watches as his teammates get torn apart. He’s not the quickest but if he had put more effort in to cover the ground quickly, there’s a chance that opportunity is snuffed out before the pass is played into Neres’ path to begin with.

Ballon d’Or winner Luka Modric will get most of the post-match coverage and criticism for the way he was so easily outmanoeuvred by Barcelona-bound Frenkie de Jong and Ziyech at times, but the absence of his midfield partner was particularly telling during those instances.

Kroos couldn’t keep up. His passing statistics were not at their usual impressive numbers (81.7%) and despite a game-high 85 touches, the 29-year-old was unable to impose his quality on the game more regularly than he did – which was infrequently and in bursts. 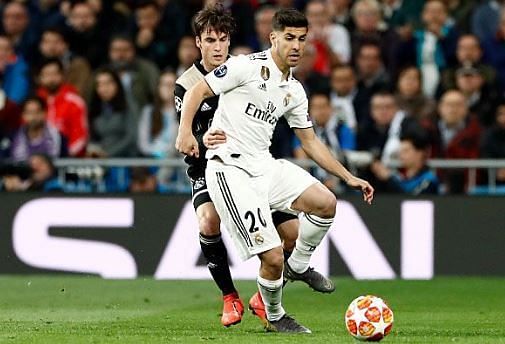 Asensio was one of few bright sparks for Real, coming off the bench once again

Asensio’s impact has been stifled somewhat this season with regular minutes hard to come by at times. However on an occasion where Real needed some creative impetus to get them back into proceedings, the 23-year-old Spaniard was comfortable delivering exactly that – which begs the question, why did he not start?

He scored the winner in Amsterdam three weeks ago and netted Real’s only goal during this one too, a well-taken one-touch finish just inside the box which left goalkeeper Andre Onana no chance as it flew in off the far post.

On as a 34th-minute replacement for the injured Vinicius Júnior, he impressed and unsurprisingly proved a nuisance for Ajax to contend with. Two key passes, three dribbles completed, fouled on three occasions too, Asensio’s introduction wasn’t felt immediately but you could see him doing his utmost to will the hosts back into a match they deserved to lose.

For that and another bright display, it does his reputation no harm. Having said that though, consistency is the key for him now to assert himself in the upper echelon of creative talents. 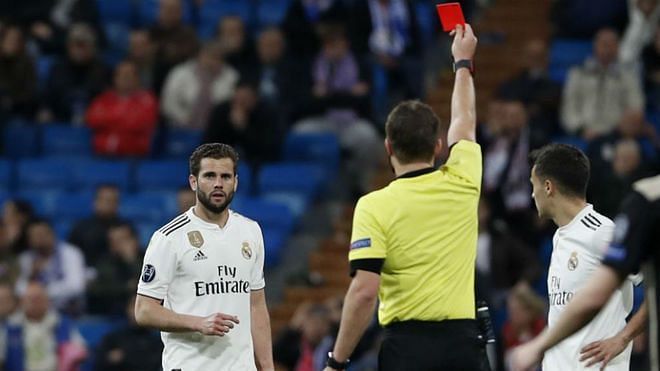 With Sergio Ramos’ absence a significant one at the heart of Real’s backline, they needed someone to lead by example and show the necessary composure to guide their passage into the quarter-finals.

Varane tried, but Ajax’s quick-fire start to proceedings only worsened tensions at the back for the hosts. Nacho, sent off during their 2-1 win over Levante on February 24, started again here and found himself culpable in the build-up to both goals.

For the first, he let Tadic leave him behind effortlessly in a foot race. It was his pass, under no pressure, which broke the deadlock. As for Neres’ goal, he should have anticipated the danger directly after Tadic’s skill on Casemiro gave him free reign to gallop forward and pressured the Serbian into making a pass he would have been uncomfortable completing. Instead he was caught ball-watching and within seconds, Real were 2-0 down.

His evening was typified when, at 4-1 down, he angrily scythed down van de Beek with a high studs-up challenge down the midfielder’s ankle. A straight red card, second dismissal in successive games and the 29-year-old Spaniard endured another night to forget. 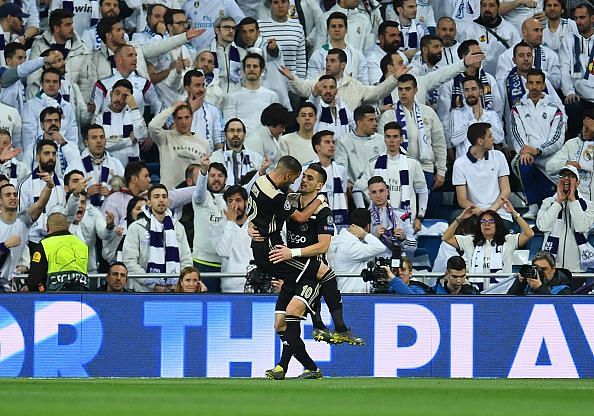 Ziyech, just like Tadic and others besides, has asserted himself as a mainstay within an ever-improving Ajax side. It’s no wonder the Moroccan is courting interest from some of Europe’s top clubs, as his performances have been elevated to the next level.

This display, if anything, proved why the 25-year-old deserves a platform on the big stage and young fullback Sergio Reguilon had his hands full with the energetic midfielder racing towards him down the flank wherever possible.

His match statistics typify what you’d expect in a game of such magnitude: three key passes, two dribbles, four tackles completed, three interceptions, two clearances and no fouls committed. The type of all-round shift from a midfielder aware of the opposition’s strengths – as well as their own. His razor-sharp finish kick-started the rout, leaving Courtois no chance. 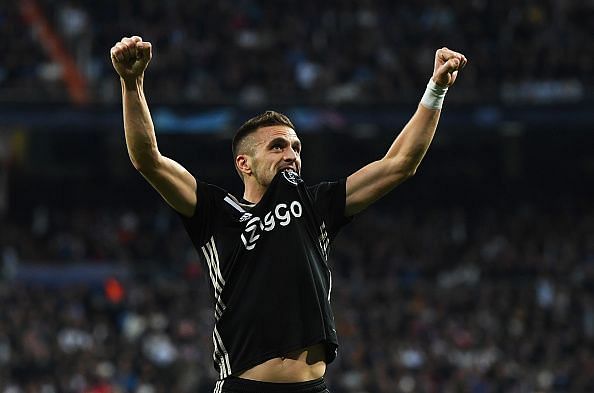 With a one-goal deficit to overturn away from home against an unpredictable Real side, Ajax needed a matchwinning performance for the ages: Dusan Tadic duly stepped up to the plate.

Two assists, an excellently-taken goal with aplomb and five key passes on a night where Real midfielders were essentially chasing shadows out of possession, the Serbian was pulling the strings beautifully.

His first assist came after Ziyech had capitalised on a defensive error inside the hosts’ half. Tadic advanced forward beyond Nacho, waited patiently for runners to arrive and wheeled away to celebrate seconds afterwards – having teed up the onrushing Ziyech, who made no mistake with an excellent finish into the bottom corner. Thibaut Courtois, for all the criticism levelled at him, could do nothing to stop that.

Not done there, Tadic’s sublime roulette left Casemiro in his wake before feeding David Neres ahead of him. The Brazilian still had a bit to do, shrugging off Luka Modric’s advances and chipping over an onrushing Courtois, but the skill and pass were beautifully timed by Tadic as Ajax doubled their early lead.Having already got the better of Nacho in the first-half, Tadic was confident enough to replicate a similar style again after the break.

Controversy struck for Ajax’s third goal as VAR decided against overturning the strike – despite the ball being out of play during the build-up – but Tadic’s goal was well-taken and nothing less than he deserved. Teed up by Donny van de Beek, he took one touch to control and another to flick it away from Nacho before curling his effort into the top corner.

Tadic has now scored 26 goals and created 15 assists this season across all competitions. If not for the 30-year-old’s contributions, Ajax would have seen history repeat itself with another last-16 knockout defeat.