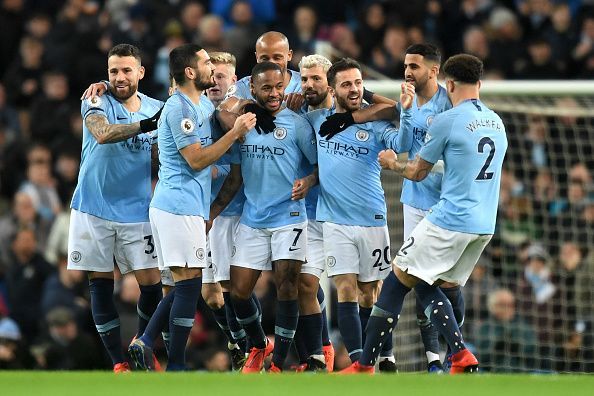 Raheem Sterling’s 12-minute hat-trick saw the Premier League leaders extend the gap atop the table to four points, after a 3-1 win over a determined Watford side.

All four goals came during an action-packed second-half at the Ethiad. The breakthrough came through Sterling’s dubious first, which was eventually ruled a goal following intense discussions between match officials – whether the Englishman was offside when Sergio Aguero’s ball was played into him.

Spanish winger Gerard Deulofeu reduced the arrears straight after being introduced in the 66th minute. However, this proved only a consolation for Javi Gracia’s men, who were organised and defended well in the first-half but overwhelmed after the interval.

Title challengers Liverpool are still to play, they host strugglers Burnley in today’s early kick-off at Anfield. With all of that in mind, here’s a look at five talking points from another important City victory: 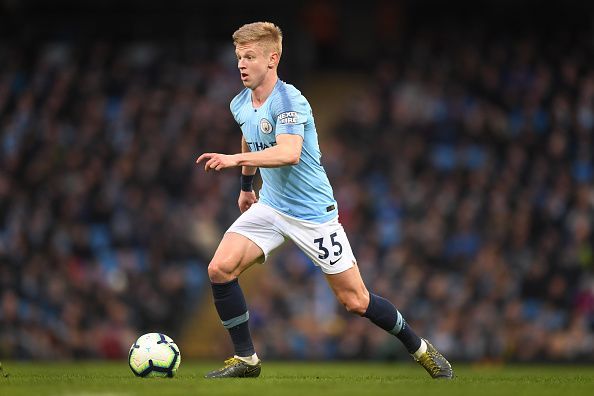 Zinchenko enjoyed another solid outing in his fourth successive start

Otamendi – sent off in their Champions League first-leg tie against Schalke – has struggled for consistency in recent weeks and the Argentine didn’t exactly cover himself in glory on this occasion. Despite a solid all-round display, he was crucially poor defensively when it mattered most.

In the build-up to Deulofeu’s goal, fellow substitute Troy Deeney out-jumped Vincent Kompany to head goalwards – and rather than to clear his lines, he assumed there was no danger behind him and gestured for Ederson to rush out, smothering the ball. His conscious decision invited the attacker to latch onto the loose ball behind him and gratefully slot beyond the Brazilian.

Although it proved only a consolation on the evening, it’s another mistake made by an error-prone defender who enjoyed an excellent 2017/18 campaign – but these sloppy errors have creeped back into his game once more.

As for Zinchenko, it’s another 90 minutes in the bank for a talented youngster hungry for regular appearances. At 22, the Ukrainian has had to remain patient among a star-studded squad with competition for places fierce.

It’s the same reason that after his display against Southampton on December 30, he didn’t feature in the top-flight again until February 10 – part of their 6-0 win vs. Chelsea. This was his fourth consecutive start and although unspectacular, he was solid as usual: two aerial duels won, 87.3% pass accuracy, one tackle and two interceptions completed.

He’s already made more appearances across all competitions this term (19) than he did last year (14) and continues to impress, slotting seamlessly in an unfamiliar left-back role while Benjamin Mendy (knee) remains sidelined. 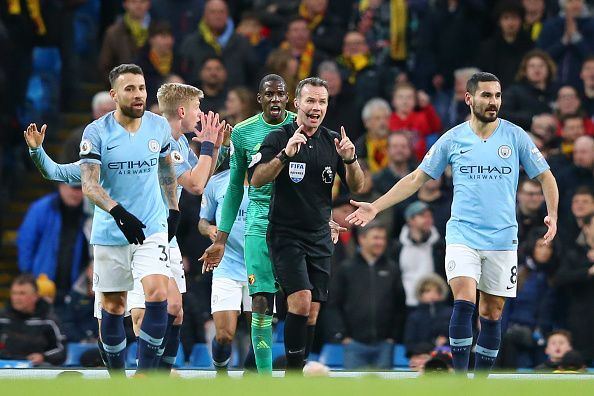 Referee Paul Tierney was embroiled in a dubious officiating decision

Watford held firm for 45 minutes and just like Bournemouth did, appeared dead set on ruining City’s title hopes to earn a share of the spoils – but aided by a dubious officiating decision, City took the lead just 40 seconds after the restart.

Aguero’s chest pass was teed up perfectly for an offside Sterling and Daryl Janmaat’s sliding attempt at clearing the danger inadvertently turned the ball into the back of his own net. As he attempted to play the ball and touched it, Sterling being offside didn’t matter.

However, the winger was still trying to play the ball and therefore active – so theoretically, the goal shouldn’t have stood. Just four minutes later, Sterling completed his brace after good work down the right-hand side by Riyad Mahrez. Watford were down and seemingly out, their defensive strategy effectively foiled and City with wind in their sails.

With 15 goals scored between the 45th and 60th minute in top-flight fixtures this term, perhaps you shouldn’t be surprised. City attack with relentless speed and numbers in space, while the likes of David Silva and Ilkay Gundogan spray enticing forward passes which split defences and open bigger gaps. 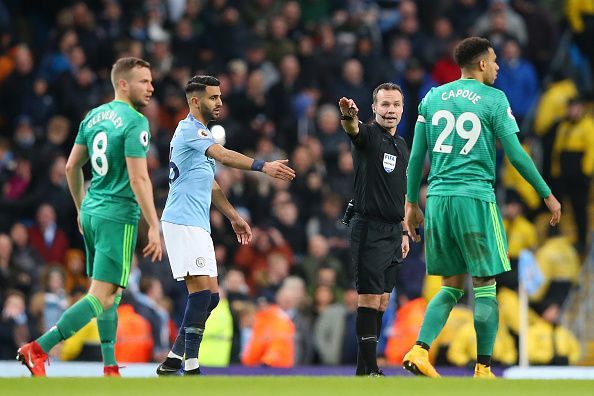 Mahrez was impressive on a rare start for the Algerian, after his matchwinning display vs. Bournemouth last weekend.

Despite the scores being level at the break, Mahrez was easily City’s brightest spark and you could tell he was playing with a chip on his shoulder too. His matchwinning display from the bench on the south Coast last weekend merited his inclusion from the start here and in truth, he could’ve had a goal and assist before the interval.

An excellent searching cross fell nicely into David Silva’s path, which the Spaniard headed narrowly wide after seven minutes. The Algerian himself could’ve been the beneficiary of a similar delivery himself, if Aguero had looked up and spotted his run – rather than shooting – on the stroke of half-time.

Unsurprisingly, he was involved in most attacks and his eventual assist was more straightforward. Silva’s deft nutmeg set him through, running into the box and calling for the ball behind an unsuspecting fullback Adam Masina. He slotted it across goal for Sterling, who made no mistake with the tap-in to double City’s lead.

His movement was troublesome and if for better awareness from his teammates, he certainly would’ve got on the scoresheet. As for his match statistics, they speak for themselves: three key passes (82.5% pass accuracy) and aerial duels won, three dribbles completed, fouled twice, one interception. 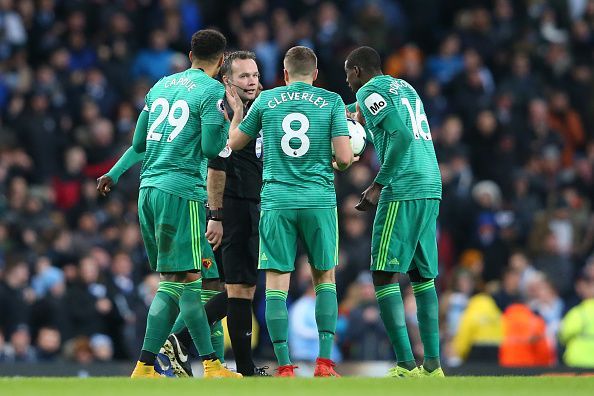 Watford’s gameplan was foiled early in the second half, courtesy of Gracia’s defensive tactics

Javi Gracia’s team selection for this game was, baffling to say the least. He opted against starting two key players – captain Troy Deeney and goalscorer Gerard Deulofeu – making seven changes to the side who were 2-1 winners against Leicester last weekend.

You can understand his decision to adopt a more defensive strategy, but even still, this was too rigid in midfield and crucially lacked any real counter-attacking threats – considering they were starved of possession.

Tom Cleverley’s early booking meant he couldn’t impose himself in midfield, while Abdoulaye Doucoure had a poor display. Etienne Capoue was impressive in the centre but winger Kiko Femenia was quiet, Isaac Success frustrating – so it wasn’t a surprise the pair were replaced for fresh legs in the 65th minute.

It’s telling that two of their best performers came from the bench, yet should have started here, particularly against a tougher opponent. It speaks volumes that they only registered two shots, one on target, in 90 minutes. If this is how every side lines up against City for the remainder of the campaign, they’d better hope for a Newcastle-style poor performance. 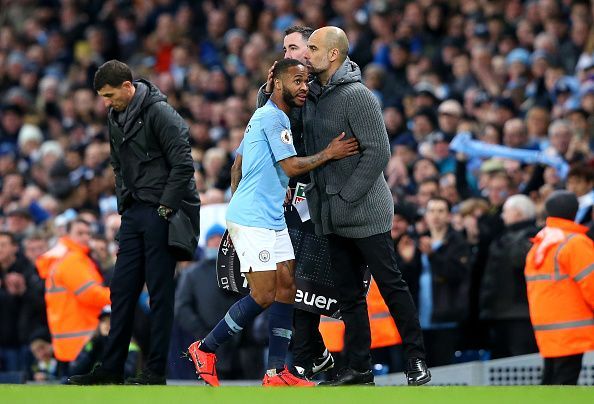 After two league games without a goal, Raheem Sterling returned to form with a hat-trick – his first for Manchester City – and deserved his standing ovation after being replaced after the hour mark.

The first goal wasn’t the most aesthetically pleasing, but excellent attacking positioning set him up in the perfect place to benefit as Watford were caught sleeping early after the restart. His second was a tap-in, but he evaded the attentions of Kiko and Janmaat near the back post to get there in the first place.

As for his third, well, it was the best of the lot. He darted beyond Janmaat, evaded Christian Kabasele’s attentions and deftly dinked the ball over an onrushing Ben Foster. 15 goals and 11 assists in 27 appearances this term, Raheem’s contributions were much-needed for a City team eager for attacking inspiration.

One key pass (97.4% pass accuracy), one dribble and interception completed, three shots – three goals. Man of the Match display, with some deft touches and probing attacking intent to go along with it.