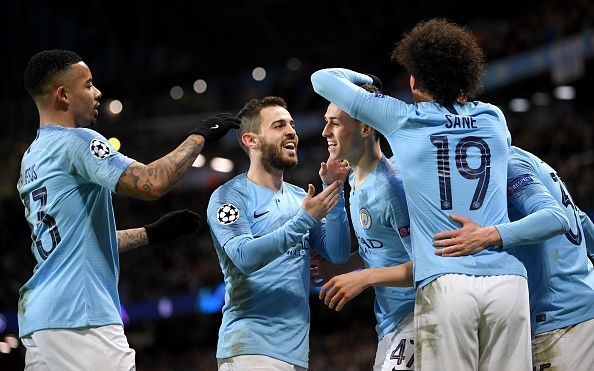 Manchester City cruised into the Champions League quarter-finals in style against a struggling Schalke side, but which players excelled whilst others wilted at the Ethiad?

Manchester City progressed into the Champions League quarter-finals in style, with a 7-0 (10-2 on aggregate) win over Bundesliga strugglers Schalke 04 at the Etihad Stadium.

Sergio Aguero’s brace started the rout, while strikes from Raheem Sterling, Bernardo Silva as well as substitutes Phil Foden and Gabriel Jesus capped an emphatic night in Manchester. Leroy Sane, who scored a wonderful free-kick in the first leg off the bench, scored one and assisted three against his boyhood club too.

Schalke – who showed good spirit despite a late 3-2 defeat in Gelsenkirchen – struggled to get going and seemingly gave up as the match wore on. Domenico Tedesco’s men have only won two games (all comps) since December 22 and signs are bleak for a side who have regressed significantly over the past twelve months. With all of that in mind, here’s a look at five hits and flops from City’s latest victory: 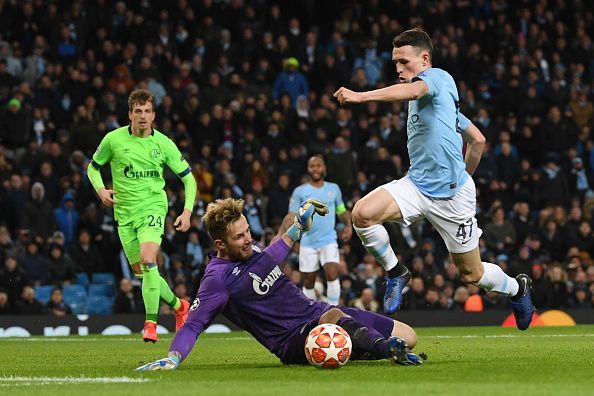 Fahrmann was left exposed by an unreliable backline, though the goalkeeper did himself no favours either

For a player of his experience and quality, Ralf Fahrmann should have done better to keep the scoreline respectable in this one. Instead, he conceded seven goals. Although not all of them were his fault, many could have been prevented. His inconsistencies between the posts typify a problem at the back for Schalke this term and the manner of City’s goals were all too easy too.

The first was Aguero from the penalty spot, which is a 50/50. He was made to look silly as the Argentine’s Panenka sent him the wrong way. As for his second goal just minutes later though, he should have reacted quicker to close his legs and block the shot. Instead though, Aguero’s effort squirmed through at the near post.

As for Sane’s goal, the visitors’ backline was split to shreds but his attempts to close down the angles actually gave his compatriot more of the goal to aim at. He picked his spot and slotted it through Fahrmann’s outstretched legs. Sterling’s finish was an excellent one, which he couldn’t have done much about in truth.

Bernardo Silva’s effort was well-taken but he got fingertips to the shot before it cannoned in off the post – while Foden left him for dead in the box and Jesus’ goal just emphasised a dismal evening’s work for Schalke’s first-choice keeper. Unsighted yes, but he was poor throughout and his performance stuck out like a sore thumb here. 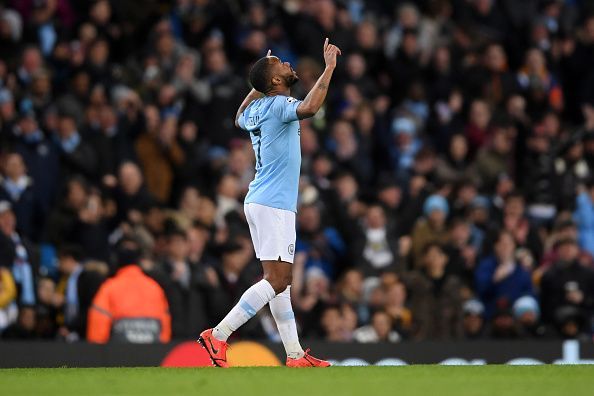 Another productive showing for Raheem as City flex their creative muscles

An honourable mention goes to Aguero – who should feature in this list – but for the outstanding work of a teammate that often goes unnoticed which came to the fore today.

Raheem Sterling meanwhile, was excellent as he usually is. Much has been said about his improved finishing, decision-making and maturity under Pep Guardiola but it’s clear that the forward’s enjoying his football and this is when he’s at his most dangerous.

His deft backheel flick for Aguero’s goal was sumptuous and well-timed, while the individual finish from Leroy Sane’s piercing through ball was beautiful to watch. He hit it first time on the volley, poor Fahrmann had no chance as the strike arrowed toward the top corner with aplomb.

So much for not being able to finish! His intelligent movement and attacking runs were difficult to track all evening long, while a solitary goal and assist don’t do his individual display enough justice. A game-high five key passes, 84.6% pass accuracy and two dribbles completed, it was another impressive showing from one of City’s many talismen. 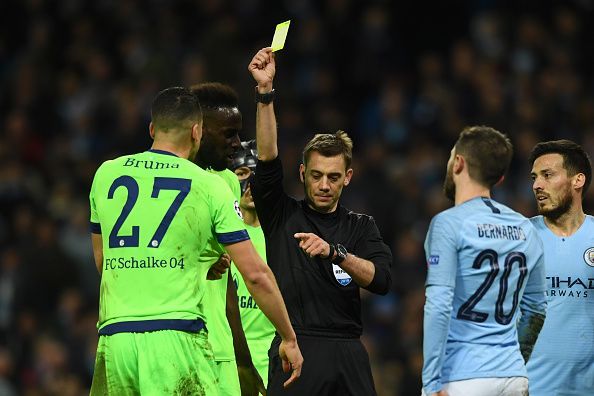 Bruma endured a forgettable evening, having given away the penalty and being constantly exposed

Jeffrey Bruma sealed a six-month loan deal from VfL Wolfsburg in January and given Schalke’s circumstances, this was the perfect platform for the Dutchman to justify why he’s worth a long-term investment.

Performances like this one tonight, however, suggest the opposite. The 27-year-old was error-prone and shaky from the offset so naturally, City pounced on Schalke’s weak backline and made them pay accordingly.

He needlessly gave away the spot-kick which started the rout, as he tugged onto Bernardo Silva as the Portuguese international looked to latch onto Ilkay Gundogan’s excellent through ball. With Fahrmann coming out to smother the danger, the defender didn’t need to do any more than just jockey the attacker – especially given his physical advantage over Silva.

He let Aguero outmuscle and run beyond him during the build-up to his second goal, while caught ball-watching as Sterling ran across him before latching onto Sane’s fantastic pass to make it four.

Often ball-watching and too immobile to make much difference, his display was typified by Jesus’ strike, the final nail in the coffin for Schalke. He stood with his hands behind his back to avoid being penalised for a handball – flinching when Jesus struck goalwards and ducked out of the way, impeding Fahrmann’s line of sight and a half-hearted attempt at blocking the Brazilian’s effort altogether. Why stand there then? 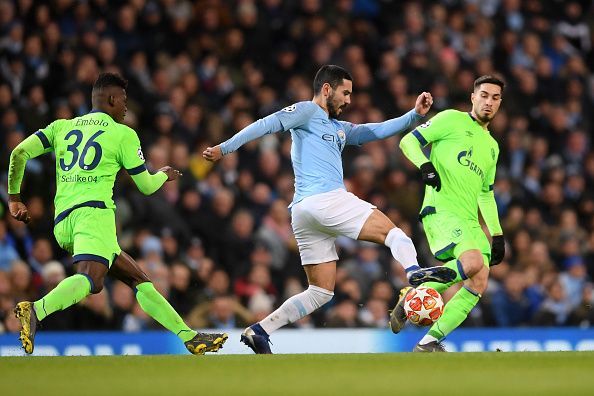 Ilkay Gundogan‘s creative brilliance has never been a question – his fitness and consistency to perform though are constantly up for debate. On this occasion, the German playmaker showed us exactly what he can do when on top form. If not for his individual display, City wouldn’t have won so comfortably.

Continuing to spray excellent passes over short and long distances, finding open teammates in space, the 28-year-old orchestrated attacks similarly to the way David Silva takes over games in possession.

He played an integral role in a number of attacks, namely City’s first two goals. It was his probing pass which prompted Bernardo Silva’s run, resulting in a spot-kick. His fantastic ball into Sterling saw the Englishman tee up Aguero for his second just minutes later. Match stats: A game-high 144 touches, two key passes (92% pass accuracy), two aerial duels won, one dribble and three interceptions completed.

Out of contract next summer, talks over an improved deal at Eastlands have stalled for the meantime and unless that changes in the coming months, there’s a dilemma ahead for City to ponder. Being their only natural Fernandinho replacement in defensive-midfield – not his preferred role – they have to risk losing him for free or cash in whilst he’s still of value. After a display like this one, he’s certainly forcing them to sit up and take note. 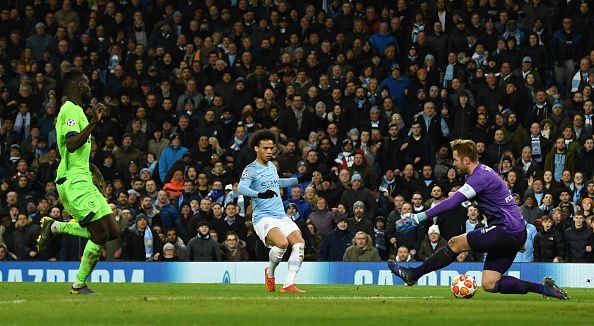 Sane was rampant against his former employers, as competitor Mahrez watched on from the bench

Last but certainly not least, the hometown hero. Leroy Sane came off the bench to score a superb free-kick equaliser in the first leg and although his form has been exceptional this term, Pep Guardiola’s selection headache continues to intensify with both he and Riyad Mahrez battling for a regular starting berth.

After two outings predominantly watching on from the sidelines, it was Sane’s time to shine and he did so with ruthless efficiency. He made no mistake to slot through Fahrmann’s legs for City’s third, before turning creator with three assists during an inspired second-half display.

His devilish pass to Sterling split Schalke’s weary backline to shreds, before he watched on as Raheem made no mistake with a sweetly-struck effort. Bernardo Silva’s goal wasn’t as aesthetically pleasing, but still, it was a good strike after Sane’s unselfishness saw him cut the ball back across the box with the Portuguese patiently waiting.

His third assist was excellent too, having collected the ball from Oleksandr Zinchenko, he left Salif Sane for dead before playing substitute Phil Foden through on-goal with a great opportunity that he simply couldn’t pass up. Three key passes, 83.3% pass accuracy, two dribbles and interceptions, three tackles completed too. Busy evening for Sane, who continues to flourish.