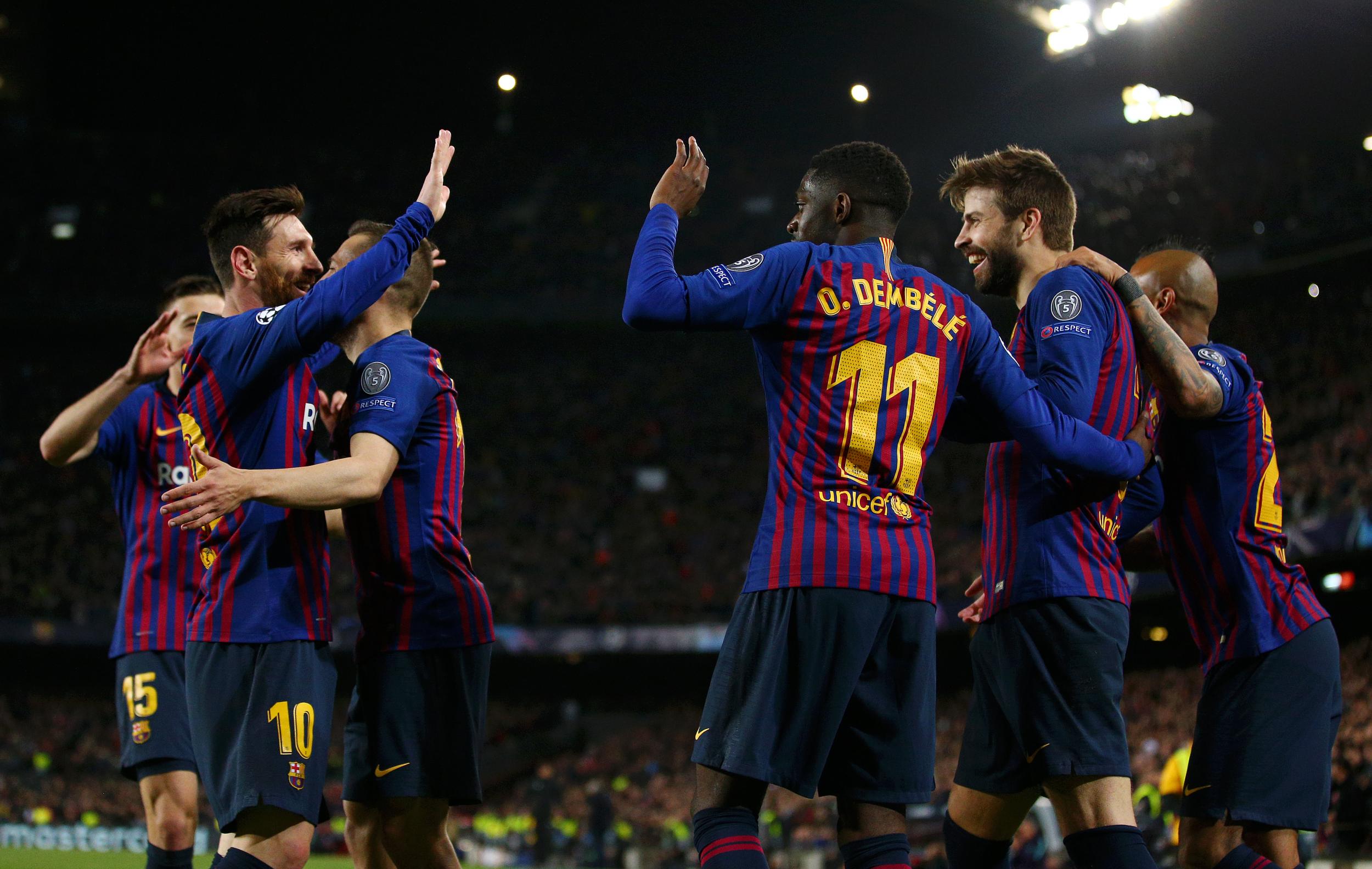 Lionel Messi scored two goals and created two more as Barcelona earned a 5-1 win against a plucky Lyon side at the Nou Camp, sealing their quarter-final berth and being the only Spanish side left among Europe’s elite at this stage of the competition for the first time since 2009/10.

The big team news coming into this one was the return of Lyon talisman Nabil Fekir from suspension, while Ousmane Dembele dropped to the bench with Philippe Coutinho – booed last week against Real Valladolid – started as part of Barca’s three-pronged attack.

Cristiano Ronaldo’s hat-trick rescued Juventus from a first-leg two-goal deficit against Atletico Madrid last night and now all eyes were on Messi and whether he’d manage to drag his Barca teammates into the Champions League quarter-finals after an intriguing goalless draw three weeks ago.

Despite a promising start by both teams, Barcelona were quickly in the ascendancy. If not for Anthony Lopes and quick reactions in dangerous situations, the hosts would have raced into a three-goal lead after 15 minutes.

The Portuguese international, 28, had to be at his razor-sharp best to keep a clean sheet in the first leg. But he could only watch as Lionel Messi’s Panenka floated into the net from twelve yards after Jason Denayer’s needless tackle attempt on Luis Suarez.

18 minutes in, Barca were ahead and Lopes found himself called upon again to rush off his line and make an important intervention. Seconds later, the visitors almost scored an equaliser themselves.

Memphis Depay and Moussa Dembele combined, before the latter created ample space for a shot goalwards. Clement Lenglet’s excellent block ensured his compatriot’s effort flashed narrowly wide of Marc-Andre ter Stegen’s far post, but this served as a timely reminder that Lyon posed a real counter-attacking threat themselves despite adopting a defensive formation.

Coutinho almost scored himself too, but Lopes opting to rush off his line saw him need five minutes of medical treatment – after which he was dazed and disorientated, but refused to come off. Suarez forced him into another good stop from range, before turning creator for Coutinho at the end of a well-worked Barca move. 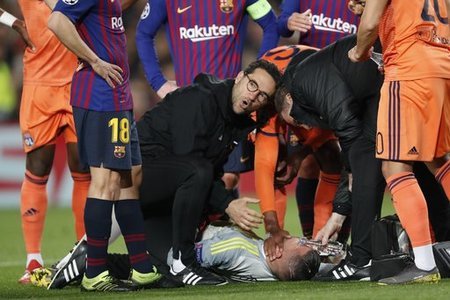 Arthur’s piercing pass into the Uruguayan saw him take a brilliant touch, advance beyond two Lyon defenders and tee up Coutinho to his left. He has been struggling for form, but this was a welcome boost for the Brazilian playmaker.

With a two-goal deficit to overturn and Lopes still looking worse for wear, Lyon’s coaching staff made the wise decision to replace their first-choice ‘keeper. Replaced to warm applause around the ground, he trudged off in tears after another impressive display – one that he would have wished to continue in. Better to be safe than sorry, though.

Mathieu Gorgelin replaced him and was forced into action almost immediately, making a good diving stop to deny Messi after Sergio Busquets’ brilliant through pass. 2-0 up at half-time, neither side made any alterations at the break and Barca could’ve increased their lead again shortly afterwards too.

Arthur showed great composure and agility to fend off opposing challenges after Coutinho’s excellent pass set him through on-goal. Off-balance, he fed the ball across to Messi – who dinked an effort over an onrushing Gorgelin but watched with frustration as Fernando Marcal made an excellent recovery clearance near the goal-line.

Denayer was called into action to make an important sliding tackle and halt Messi in his tracks shortly afterwards, as the Argentine edged dangerously near goal. Fekir and his supporting cast were more defensively conscious than you’d expect, so naturally needed to take more risks if they were to have any chance of a surprise comeback.

That’s precisely what they did after the break, with Bruno Genesio telling his players to push further forward and fullback Ferland Mendy in particular was a threat down the left. Fekir shot wide from distance, Mendy’s cross-cum-shot was tipped over the bar by ter Stegen and suddenly the Ligue 1 side were enjoying an encouraging spell themselves.

From the resulting corner, they halved the deficit and gave themselves a lifeline – albeit after poor defensive work from the hosts. Memphis’ inswinging cross saw Marcelo bully Lenglet to the ball and his header across goal caused all sorts of problems. Lucas Tousart won an aerial duel with Sergi Roberto, beat Ivan Rakitic to the ball before slamming home into the bottom corner with a well-taken volley.

This whole sequence happened in a matter of moments, though the ball seemed to hover in the air for an age before Tousart wheeled away to give the travelling 4,000 Lyon supporters something to celebrate. VAR checks meant there was almost a 3-minute delay between Tousart’s goal and the resulting kick-off, but the sentiment remained the same: Lyon were still alive and kicking with half-an-hour still to play.

Fekir came closer with a more powerful strike, this time inside the box, which flew narrowly over the bar. You could sense Barca fans getting agitated that despite their dominance, they only had a slender lead to show for it – particularly after Denayer made another important interception to stop a surging Roberto from going clean through.

Messi was at the forefront once more two minutes later, as he combined with Suarez and Coutinho before the latter watched his eventual effort crash off the side netting. Gorgelin closed down the angles perfectly, forcing him wide and into a much tougher shot.

That was Coutinho’s final action of the match, before being replaced by Ousmane Dembele with 20 minutes left. For someone who has been struggling for form the way Philippe has, this was a much better display from the Brazilian – who isn’t in his favoured role on the left, but still persisted to provide regular moments of class.

Ndombele, Lyon’s best performer on the evening, stopped Messi in his tracks with yet another interception. The 22-year-old was everywhere across the pitch and proved a real nuisance for Barca to stifle in central midfield.

Bertrand Traore replaced Memphis Depay – who was quiet again – while Arturo Vidal came on for Arthur to add more tenacity in midfield with the game still finely poised. That was until Mendy went down clutching his thigh and deemed unable to continue. Maxime Cornet came on for him in an attacking alteration after 75 minutes and within seconds, Barca’s two-goal lead was restored.

Controlling Busquets’ pass well, he accelerated forward and made the visitors pay to devastating effect. Having sent both Marcelo and Denayer one way before going the other with a deft fake, his actual effort was parried by a weak outstretched hand of Gorgelin – who could only watch with agony as it trickled into the bottom corner.

Within three minutes, it was four. Messi galloped forward from near the halfway line, shrugging off Ndombele’s challenge and teeing up the lung-busting run of Gerard Pique at the far post, who made no mistake from close-range into an empty net with Gorgelin again out to smother.

It was well and truly game over by this point and with time ticking down, Fekir refused to be beaten. He forced ter Stegen into a good diving stop – but by this point, the visitors’ attempts were futile.

Dembele got on the scoresheet to complete the rout after 85 minutes, capping another ruthless counter-attacking move. Messi’s perfect pass invited the 21-year-old to strike and he coolly slotted through Gorgelin’s legs.

Barcelona now go into Friday’s quarter-final draw as Spain’s last-standing representative and will relish the challenge – potentially up against any of four English sides still remaining, as well as Ajax, Porto and a Cristiano Ronaldo-powered Juventus.