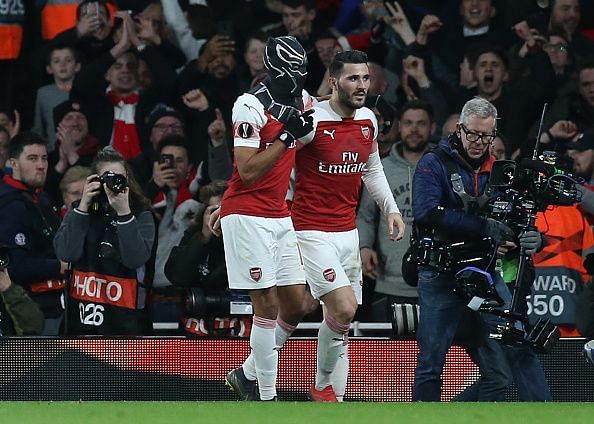 Here’s a look at five talking points, as Arsenal recovered a two-goal deficit to earn their Europa League quarter-final place with a 3-0 win over a lacklustre Stade Rennais side at the Emirates.

Pierre-Emerick Aubameyang‘s brace and Ainsley Maitland-Niles‘ first European goal saw Arsenalrecover from a 3-1 first leg deficit to earn their Europa League quarter-final place against a lacklustre Stade Rennais side at the Emirates.

Unai Emery’s men needed a fast start and that’s precisely what they got: Maitland-Niles combining with Aaron Ramsey and Aubameyang for the Gunners’ opener after just five minutes, before the 21-year-old academy graduate headed home from close-range to gift them a two-goal cushion in the 15th minute.

In a feisty affair at the Emirates, M’Baye Niang hit the post shortly after the break while Hatem Ben Arfa and Ismaila Sarr threatened in flashes too. Henrikh Mkhitaryan made an instant impact off the substitutes’ bench, threading through a key pass into Sead Kolasinac – giving Aubameyang an open goal to finish at the far post to increase their lead.

Despite a nervy finish, Emery’s men held firm for a hard-earned clean sheet and important victory which sees them take their place in tomorrow’s draw. With all of that being said, here’s a look at five talking points from Arsenal’s second successive big win after an inconsistent set of results:

#5 Ben Arfa, given his ability, was underwhelming 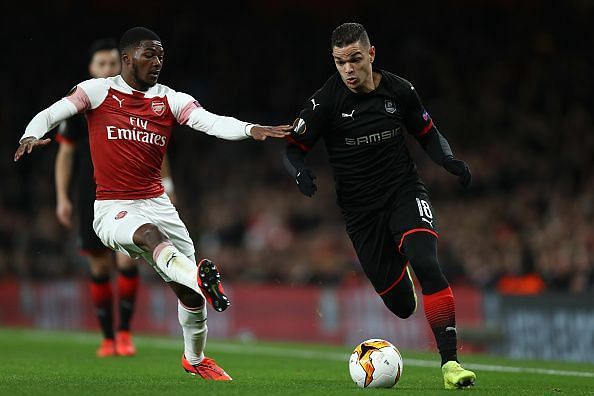 Ben Arfa was effectively shackled by Maitland-Niles and despite flashes of quality, they were too infrequent

Given Hatem Ben Arfa’s troubled history with Emery – left frozen out during his spell at Paris Saint-Germain, as well as a Man of the Match display in last week’s first leg, you’d be forgiven for expecting a better performance from the creative midfielder here.

The experienced Frenchman racked up three key passes, nine dribbles and was fouled on four occasions in Rennes’ home tie last week, proving himself a real handful for a ten-man Arsenal backline to contend with. It’s what we’ve come to expect from Ben Arfa given his individual moments of magic in England’s top-flight, but here was arguably his worst showing of 2019 to date.

Being the visitors’ best technical player, he struggled to properly impose his threat on the game. One key pass, 87.9% pass accuracy and despite 57 touches of the ball, he failed to create much in the final third. Shackled for sustained periods here, he completed five dribbles but was dispossessed a game-high eight times.

There were brief flashes of danger that Arsenal needed to remain aware of, like the chance where he strayed offside and another which was stopped in its tracks after a poor decision saw him relinquish possession. It was that type of game and not sufficiently helped by his attacking teammates, they tried to force attacks too often which only saw them lose possession more easily in a match they couldn’t afford to. 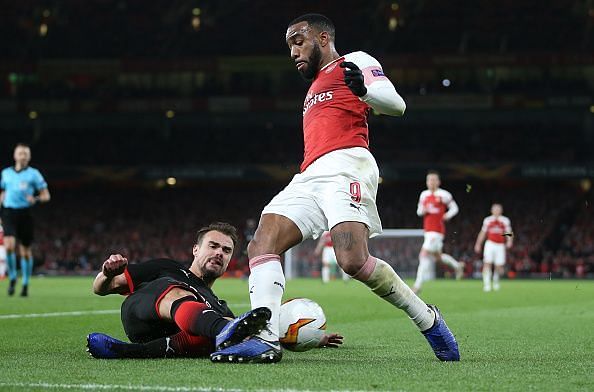 After his suspension was surprisingly reduced on Wednesday, news of his inclusion proved a welcome boost for Arsenal’s chances of progression. Although it was an average display by the forward’s high standards, you could tell why his presence alone was key too.

Having scored or assisted in seven of his last nine outings prior to this encounter, he was a constant threat – just like against Tottenham and Manchester United, where he wasn’t at his best but still managed to hassle and harry the opposition into making mistakes and applying the necessary pressure from the front. His infectious attitude sets the tone and defensive work out of possession stifled Rennes’ tactics.

One key pass, dribble and aerial duel won, fouled twice and with not many touches on the ball, his match stats don’t standout. However he did the dirty work which typifies his relentless work ethic and is another reason why he quickly became a fan favourite in north London, proving there’s more to his game than just goals and assists. 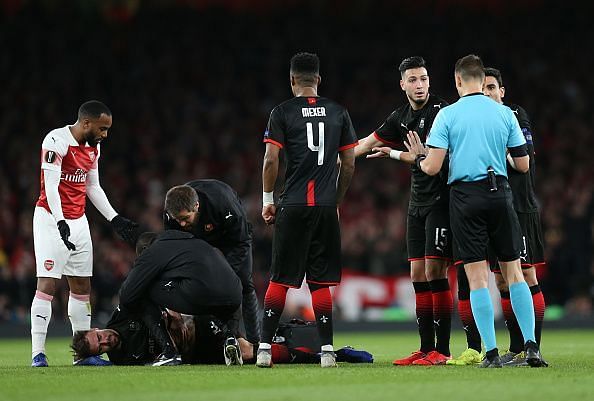 Arsenal’s blistering start was duly rewarded with a two-goal cushion after 15 minutes and despite Rennes’ attempts to respond quickly and silence the home crowd, the game became very stop-start and frustrating for them.

With so many fouls (29 in total over 90 minutes) being committed every few minutes, it ruined the free-flowing style they might have been expecting as Arsenal looked in search of more goals. Last Thursday, they were gifted space and width to attack in numbers for an hour with a numerical advantage but it was the opposite here: getting frustrated, often arguing with officials and letting it cloud their decision-making.

The hosts naturally fed into that, not exactly exhibiting the dark arts nor exactly showing their opponents much respect with some needless niggling fouls too which raised the temperature around the ground. Rennes’ gameplan was presumably to soak up pressure, before hitting on the counter to score and silence the home crowd – ala Ostersunds last season.

However, they were overwhelmed by that same pressure they needed to defend against and failed to test Petr Cech enough as their Europa League dreams came crashing to a halt in north London. This display showed Arsenal once again are capable of winning ugly and if they were more consistent, they’d still find themselves in the Premier League title race. That’s a debate for another day, though. 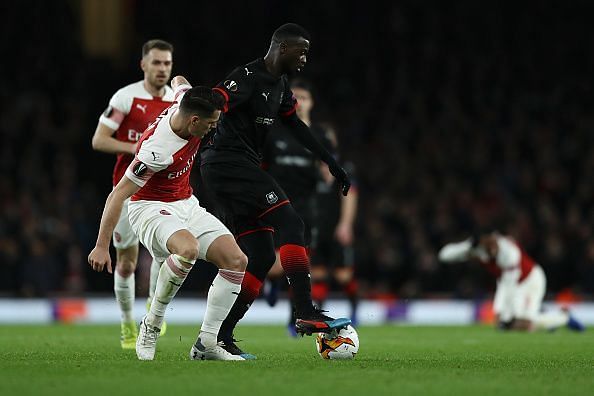 Too slow, can’t tackle, lacks discipline and awareness. Whether you like him or not, Granit Xhaka is Arsenal’s chief scapegoat for the club’s shortcomings and has been for a few seasons now.

Performances like this one, as well as his display on Sunday against Manchester United justify why he’s such an integral part of the team. Whether it’s his excellent passing range, ability to sense danger which can be found wanting at times, often goes unnoticed because he does the dirty work well.

Three tackles completed, two interceptions, blocks and key passes registered as well as fouls committed – breaking up play when he needed to, it was an accomplished display by the Switzerland international. When you watch displays like these, you can only wish critics would appreciate his role in the team more because he’s undervalued and it allows him to be scapegoated when not in the right position all the time.

#1 Maitland-Niles, not Aubameyang, the star of the show 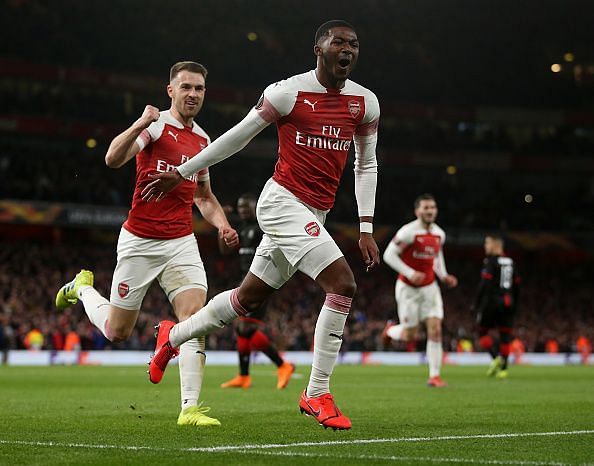 Maitland-Niles wheels away to celebrate his first European goal, in an excellent display from the youngster

Aubameyang will hit the headlines for his two-goal haul, but Ainsley Maitland-Niles was easily the star of the show here. The versatile youngster, 21, played in a right-sided wingback role and was excellent both defensively and in attack.

He showed great awareness, composure and decision-making to pick the right pass and remain patient in the build-up to Aubameyang’s strike, which will be overlooked. He made it look easier than it was.

Then, he got on the scoresheet himself to score his first European goal and maiden strike at the Emirates. Mesut Ozil gave up on the play as he assumed the ball was trickling out of play but Aubameyang salvaged it on the byline before whipping in a wicked cross, from which Maitland-Niles’ intelligent run was rewarded with a well-taken headed finish.

He worked tirelessly throughout and deserved the Man of the Match accolade, having regularly played in central midfield over the past few seasons at youth level, his versatility is an obvious strength that Emery can call upon to play a variety of different positions. Five tackles, two interceptions and one important goal.oal

Where Aubameyang scored two tap-ins and missed two sitters, you could tell how much the Gabon international was happy for Maitland-Niles in the post-match interview, hailing a local boy’s breakthrough. This should be all about him!