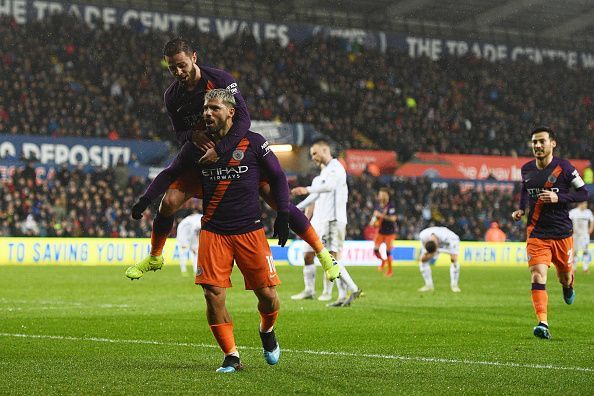 Here are five talking points, as Manchester City recovered from 2-0 down to beat Swansea 3-2 to earn their place in the FA Cup semi-finals.

Manchester City recovered from a two-goal deficit to beat Championship side Swansea City 3-2, earning their place in the FA Cup semi-finals for the first time under Pep Guardiola. They had VAR – the lack of technology on this occasion – to thank after netting two dubious late goals.

After Bernardo Silva’s excellent strike halved the deficit with 20 minutes left to play, substitutes Raheem Sterling and Sergio Aguero proved pivotal. The former was adjudged to have been fouled by former Tottenham defender Cameron Carter-Vickers, but replays showed the American won the ball during his tackle inside the box.

Aguero watched as his resulting spot-kick cannoned off the post, with goalkeeper Kristoffer Nordfeldt helpless to stop the strike from bouncing off his leg into the goal.

Then, Sergio headed home the visitors’ winner with two minutes left to play after Bernardo’s inviting cross into the box was flicked into the bottom corner. However, the prolific Argentine’s foot was in an offside position before the delivery had been made. With all of that in mind, here are five talking points from a relentless evening’s action in south Wales: 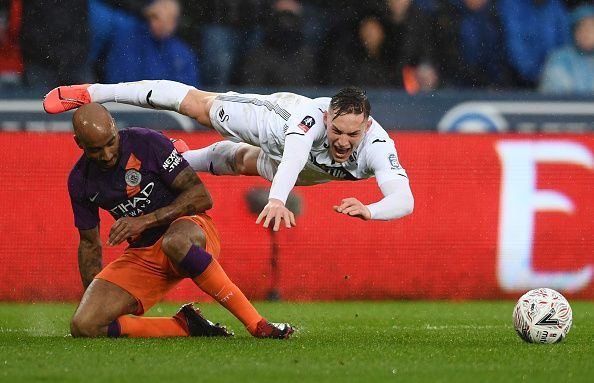 Delph was reckless in the tackle and struggled defensively, showing his lack of match sharpness

Making his first start here since an injury lay-off sidelined him in January, Fabian Delph was City’s poorest performer and stuck out like a sore thumb in defence. After 20 minutes, he made a needless sliding challenge on Connor Roberts inside the box and gifted the hosts a penalty.

This had shades of his display against Wigan in this competition last season, where he was sent off during their shock away defeat by the Latics. Granted, left-back isn’t his position but versatility is what he has been utilised for under Pep Guardiola and this display didn’t provide anyone with confidence.

He failed to offer anything in attack and was vulnerable defensively. With the midfield so stacked as it is, he’ll never get an opportunity to play in his preferred role long-term and after a performance like this, you could argue Pep has lost his faith in the Englishman.

As harsh as it may seem, perhaps it’s time for him to seriously consider his options this coming summer. Oleksandr Zinchenko was immediately much better as soon as he was introduced and Delph is seven years his senior, despite neither being suited to that role.

Forward-thinking, happy to track back and crucially confident, it was a telling sign and one which could see Delph’s spell at Eastlands come to an abrupt end. 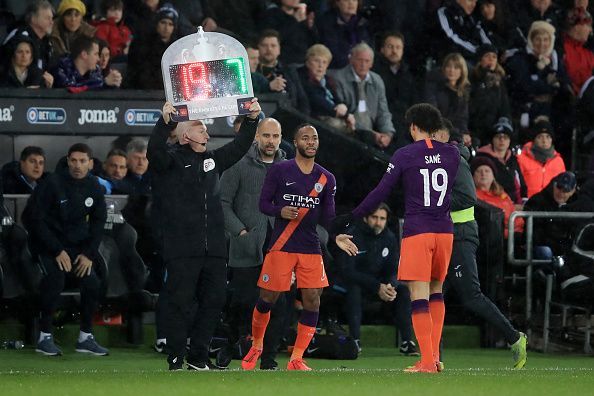 Leroy Sane looked to have been struggling with a knock for large periods in the match. He wasn’t at his best and yet still managed to create goalscoring opportunities. When he and an ineffective Riyad Mahrez came off, Sterling and Aguero were game-changers: precisely what you’d expect from such world-class talent.

Aguero was constantly looking for the ball in the final third and although his touch was far from perfect, you could tell he – and presumably Pep – were not expecting he’d be called upon at the Liberty Stadium. It was wet, windy and difficult conditions for all, though Sergio crucially came up clutch when called upon.

Whether or not you believe it was a penalty, Sterling remained persistent in his pursuit of attacking opportunities. If at first he didn’t succeed, he’d try something different and look to come up with inventive ways of beating his man. A nuisance constantly bombing into the danger areas, Carter-Vickers ultimately ran the risk of challenging Raheem in the box and was unfortunate to have been penalised.

Aguero netted the all-important winner late on but could’ve had more to his name too! Five shots, three on target, he created three key passes and had 28 touches in 26 minutes. 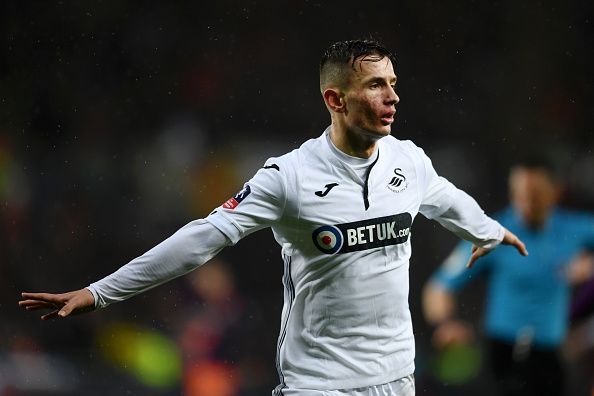 Bersant Celina, who left Manchester City for £3m last summer, netted a brilliant goal to double the Swans’ lead while ignoring an early injury scare to emerge as the hosts’ best performer in a thrilling encounter.

His attacking movement was impressive and he did well to maneuver beyond Aymeric Laporteand in particular Nicolas Otamendi in transition. This was an accomplished display and after a horrible penalty miss in midweek, he certainly atoned for it on this occasion. More of a natural number ten, he filled in perfectly with first-choice centre-forward Oli McBurnie (illness) sidelined again here.

Having already emerged as one of Swansea’s best players in England’s second tier this season, there’s no reason why he cannot make the step-up to Premier League football sooner rather than later, even if Graham Potter’s men don’t go up themselves.

Could you expect any less? His sumptuous strike left Ederson sprawling towards the far corner and this game would have meant a lot to him, scoring against his former employers. After all, he left because a lack of first-team minutes and persistent loan deals was never going to benefit him long-term – he needs stability at this stage in his career. 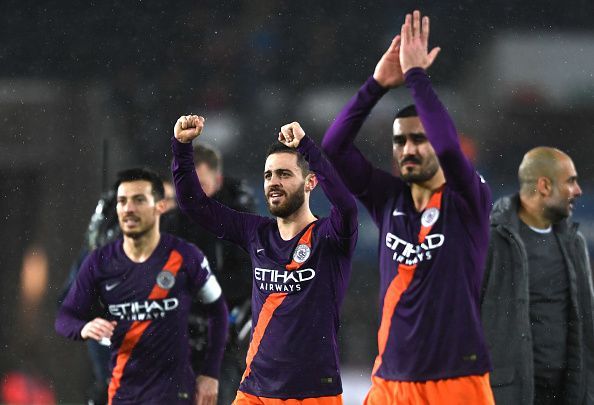 Another week, another impressive Bernardo Silva performance. It’s getting to the point where you run out of superlatives to describe him, a genius at work who relishes the challenge – regardless of City’s opposition.

Deep down, even though Aguero will get the plaudits, the Portuguese international stepped up and shone once more here, proving himself to be another of City’s matchwinners.

With one goal and assist, three key passes (89.7% pass accuracy), three tackles (a game-high for City), one interception and dribble, it was the typical all-action display we’ve become accustomed to seeing and perhaps that’s why he doesn’t tend to have better goal contribution statistics as he otherwise would be with less defensive responsibilities.

His assist – despite Aguero’s offside foot – stemmed from a great delivery and the technique needed to execute his finish was masterful to say the least. An outside-of-the-boot strike, with the right amount of power and swerve to watch it arrow into the corner, is a skill that many wish they possess. He almost did it again too, but had a goalbound effort blocked by Jay Fulton as City pressed in search of the equaliser. City’s best player reigns supreme again.

#5 The VAR debate rears its head once again 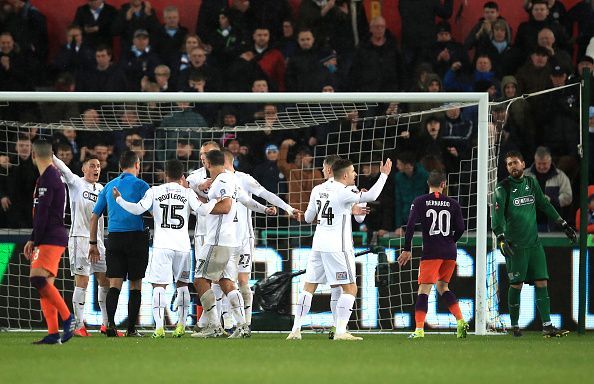 VAR was not in operation here but if it was, both of City’s final two goals would not have counted

Two goals at crucial moments changed the game’s complexion at a pivotal time in an FA Cupquarter-final. Despite enjoying a five-goal thriller between two sides in contrasting circumstances, VAR and the controversy that surrounds it overshadowed an unpredictable cup tie.

First off, why are the competition not using VAR in some games and are at others? Wolves-Manchester United had the technology in operation but not Swansea-Manchester City, because the Swans are no longer a Premier League club. Just writing that seems ridiculous, as you’re excluding clubs and putting them at a disadvantage based on their league – which is unfair and defeats the purpose of VAR to begin with.

Either everyone is entitled, or no-one. Otherwise where is the consistency? Swansea were 2-1 up and two match-defining moments turned the game upside down. Sterling’s penalty appeal and Aguero’s offside winner, which were both allowed to stand.

Now you cannot definitively say whether City would have still won the game, as Swans boss Potter revealed post-match. After all, they were dominating and particularly as the match wore on in search of goals.

However, Swansea lost and the manner of their defeat was an injustice. VAR and when it should be used is up for debate, as there’s a lot to do with perception. It takes too long, causes confusion and is ultimately a matter of the officials’ opinion.

As good a game as this was, the manner in which City won was not legitimate. It’s not their fault and they’ll happily take a smash-and-grab victory but those in charge are responsible. If VAR was in operation – which it should have been – this might have been a completely different result altogether.