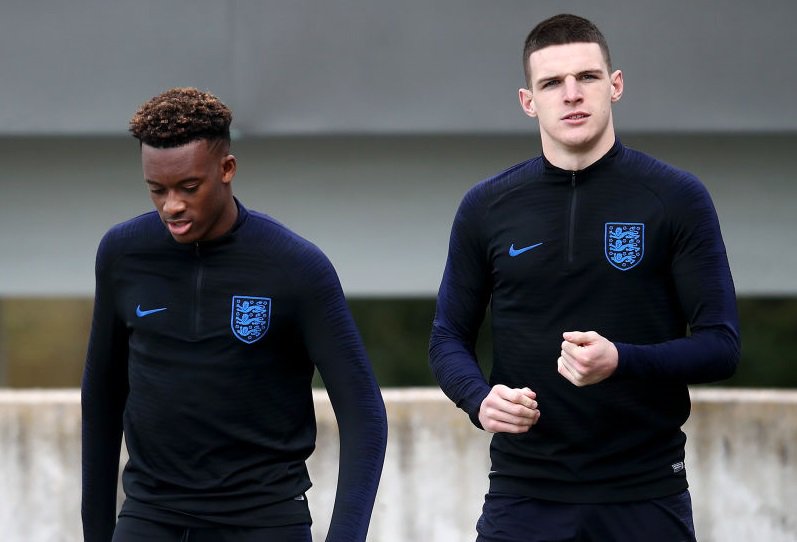 Chelsea winger Callum Hudson-Odoi, originally selected for England’s under-21s, has been promoted into Gareth Southgate’s senior side for their upcoming Euro 2020 qualifiers vs the Czech Republic and Montenegro.

Despite his undeniable talent, 18-year-old Hudson-Odoi has only played 119 minutes of top-flight football this term.

His selection under Southgate means he’s the second member of the Young Lions’ under-17 World Cup winning side to make the step up at senior level. Set to make his U21 debut for Aidy Boothroyd’s side in their fixtures against Poland and Germany over the next week, he had already arrived at the juniors’ camp in Bristol.

After being told otherwise, he travelled to St George’s Park and was quoted as saying the following:

“It’s been a crazy experience but getting my first [senior] international call-up is an amazing feeling. I thought the manager [Boothroyd] was joking. I was shocked and then, when I heard I actually had to go over, I couldn’t believe it. I was delighted – it’s a dream come true. Now I’ve got to work hard, enjoy every moment and keep working to make an impact when I get the opportunity.”

The youngster, a key component of Chelsea’s excellent youth academy in recent years, has impressed on the international stage within the youth ranks.

Watch some of Callum’s best bits so far this term:

He has made 20 appearances across all competitions this season, but only 119 minutes in England’s top-flight. Four goals and two assists in eight Europa League games, as well as a goal and two more in the FA Cup, he’s been impressive when given an opportunity this term.

Given Bayern Munich’s interest in his services – coupled with rejected bids up to £35m in January – it’s understandable the Blues are trying to appease him with more minutes.

His existing deal expires next summer and despite handing in a transfer request to seal a move to the Bundesliga, his demands were ignored. It’s likely Bayern, among others, will return with further offers this summer if his future remains uncertain but one thing is for certain: Chelsea have not given up on convincing him to stay in the long-term.

On the international scene, he joins West Ham’s versatile Declan Rice as an England uncapped player in Southgate’s latest 23-man squad – something that Boothroyd reveals comes as no surprise.

Hudson-Odoi, who is still eligible to feature in this summer’s Euro U21 Championships, will be hoping for an opportunity centre-stage this coming week with England – not only to boost his profile but equally his confidence, after some puzzling times at Chelsea this term.

“He believes he should be at this level, can get into the Champions League and that’s a great place for a young player to be – to have that confidence. He has got a really bright future ahead of him, wherever he decides to go. He’s buzzing as you can imagine.”